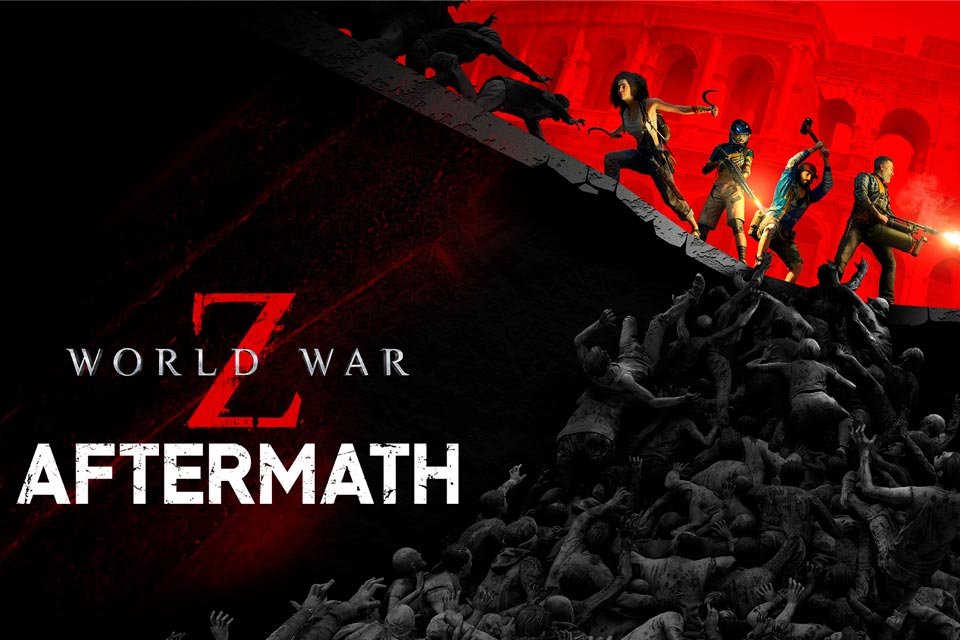 Zombie games never went out of style. The sensation of destroying hordes of beings that live in limbo between life and death, whose sole objective is to kill and feed on those who were similar to them, is simply pleasurable, especially when we can share it with friends. This was the main success of the franchise Left 4 Dead, which dominated Steam in the late 2000s.

Since then, several developers have tried to replicate the formula created by Turtle Rock, which even repeated recently with Back 4 Blood. One of them was Saber Interactive, which, in 2019, launched World War Z, bringing the book and movie franchise to video games.

It was warmly received by analysts and the public, but presented a pretty solid result to the point where Saber didn’t let go of the bone and keep working on the game. With that, we reach 2021, the year it was released World War Z: Aftermath which is a re-release of the title from 2 years earlier, bringing all the content present in its GOTY version, as well as new content and gameplay changes. Whether or not the end result pleased you, you will find out in the following analysis.

If there is one thing for World War Z is known for its absolutely giant hordes of zombies. In the film starring heartthrob Brad Pitt, it’s quite common to see walls of undead rising, which gives the feeling that nowhere is safe. It’s amazing to see what Saber Interactive has managed to do, especially when we take into account that the game is available for PS4, Xbox One and even Nintendo Switch, consoles with limited power.

Hundreds of enemies fill the screen, coming from every possible direction with a single objective: to finish off the players. Even if they don’t act in an orderly fashion, it’s super common to see them climbing structures in heaps, forming walls of rotting flesh that must be blown apart before it’s too late.

Crowd of zombies rushing in to wipe out everything in their pathSource: Francesco Casagrande / Voxel

Still, this doesn’t all come without a price, as frame drops are relatively constant, there are a lot of aliasing around the edges of objects and the resolution doesn’t look the highest (at least on the base PS4 platform I played on). In fact, this frame drop is even more abrupt when an individual is attacked by a group of mice, which seems to overload the video game’s processing capacity.

Anyone who is less strict about performance or who plays on more powerful hardware, be it a PC or a premium console, will likely overlook these issues with the greatest of ease, while others will get a flea in their ear all the time.

Now there are two issues that will affect all types of players. The first is a delay for a shot to be registered. Every time a bullet is fired at an opponent, it takes almost 1 second for the animation and damage to be computed, which is quite annoying especially in parts with less zombies on the screen, when such problem is more noticeable. The curious thing is that this only occurs in online matches and when a low connection indicator appears on the screen. The problem is that I played with my brother in the same house, separated by two bedrooms and both with wired internet.

The other is an extremely slow loading. Whether joining a group, starting a match or even opening the game, it’s more than a minute of waiting that feels like an eternity. Each of the 7 available chapters is divided into 3 or 4 parts and, whenever one of them is finished, players are sent back to the lobby, where they will have to wait another very long minute to start the next game. 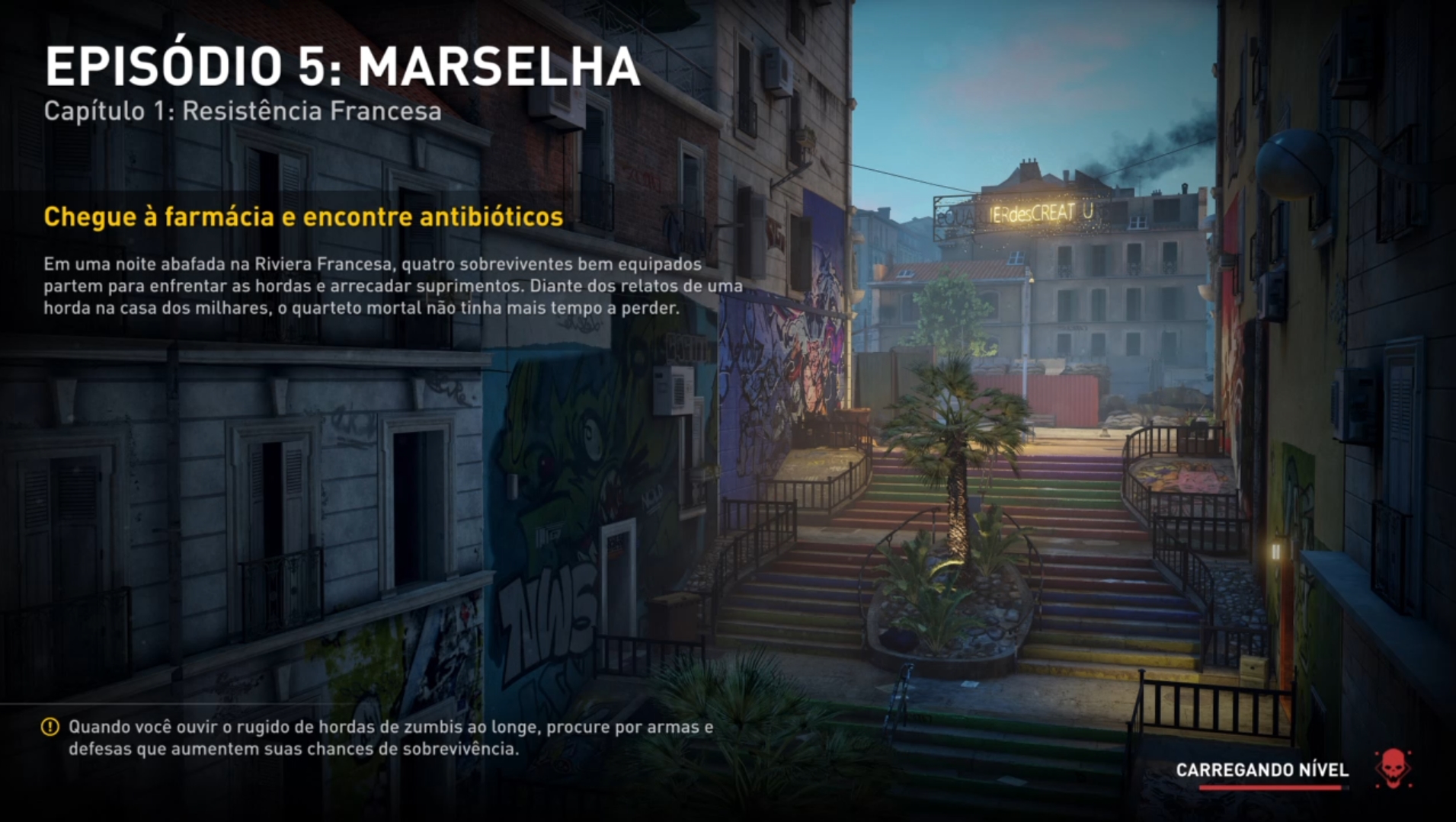 The loading time of a phase lasts almost 2 minutes even when playing offlineSource: Francesco Casagrande / Voxel

Options, differences and bullet in the needle

Before embarking on the next adventure, you can choose which character and class to use, and choose which weapons will be available. The character part is purely aesthetic, with 4 different ones available in each chapter. The class defines its starting skills and equipment. While some seemed useless to me, the Doctor’s is essential as it gives advantages to both the player himself and those who are healed by him. Finally, the room host can choose which specific weapon versions will be available, putting in a machine gun with sights or with an extended magazine, for example. It’s not a great feature, but it’s still interesting because it benefits the whole group.

One of the main additions of this version is the first person mode that can be chosen from the main menu. Even though I prefer the original vision of the game, this new one is just as fun, with no performance issues or awkwardness in movement, the latter mainly because jumps and melee attacks are performed in third person. 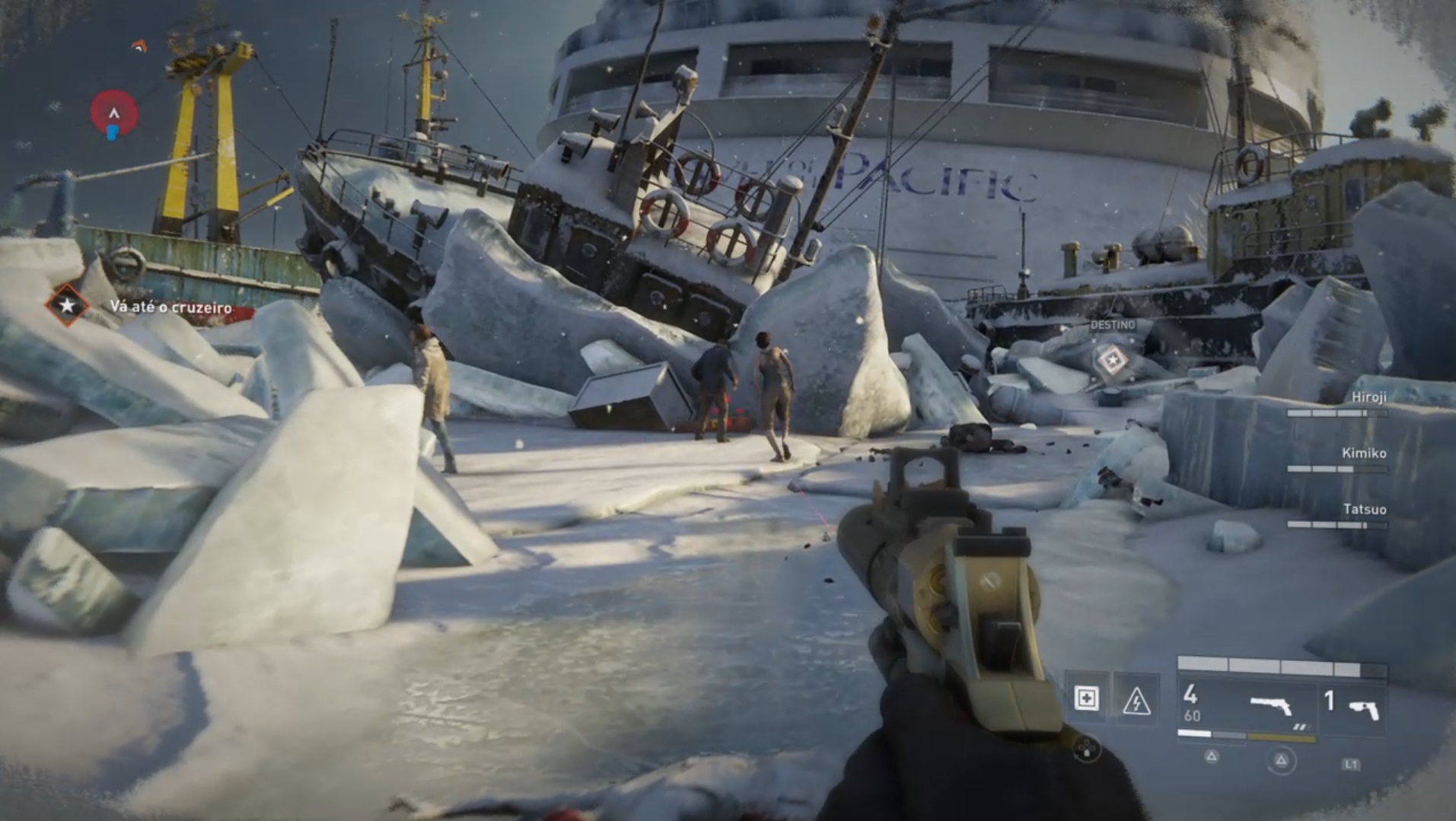 Speaking of novelties and melee combat, melee combat has undergone a makeover. The result is a great alternative for moments of “closed siege”, mainly due to the range of attacks and its strength, which I considered a little too strong. On easy, it’s as efficient as firearms and, due to an almost ineffective stamina system, it’s possible to punch zombies without stopping.

Difficulty is based on damage to allies, starting items, and strength and size of opposing hordes. A lot of my gambling was done on the easiest level because, even though the allies are pretty smart when it comes to eliminating the undead, they don’t heal, it’s up to the humans to take care of their wounds, which isn’t easy. as supplies are limited.

On one of the few times I put it on medium, I was massacred by the first horde that ran towards me after my 3 robotic allies were crushed. And don’t see it as a problem for me, the game itself recommends that players use level 5 classes to get out of the first difficulty. Giving my 2 cents on the matter, I would still recommend that the party have at least 3 human players out of the 4 available to make the situation less complicated. 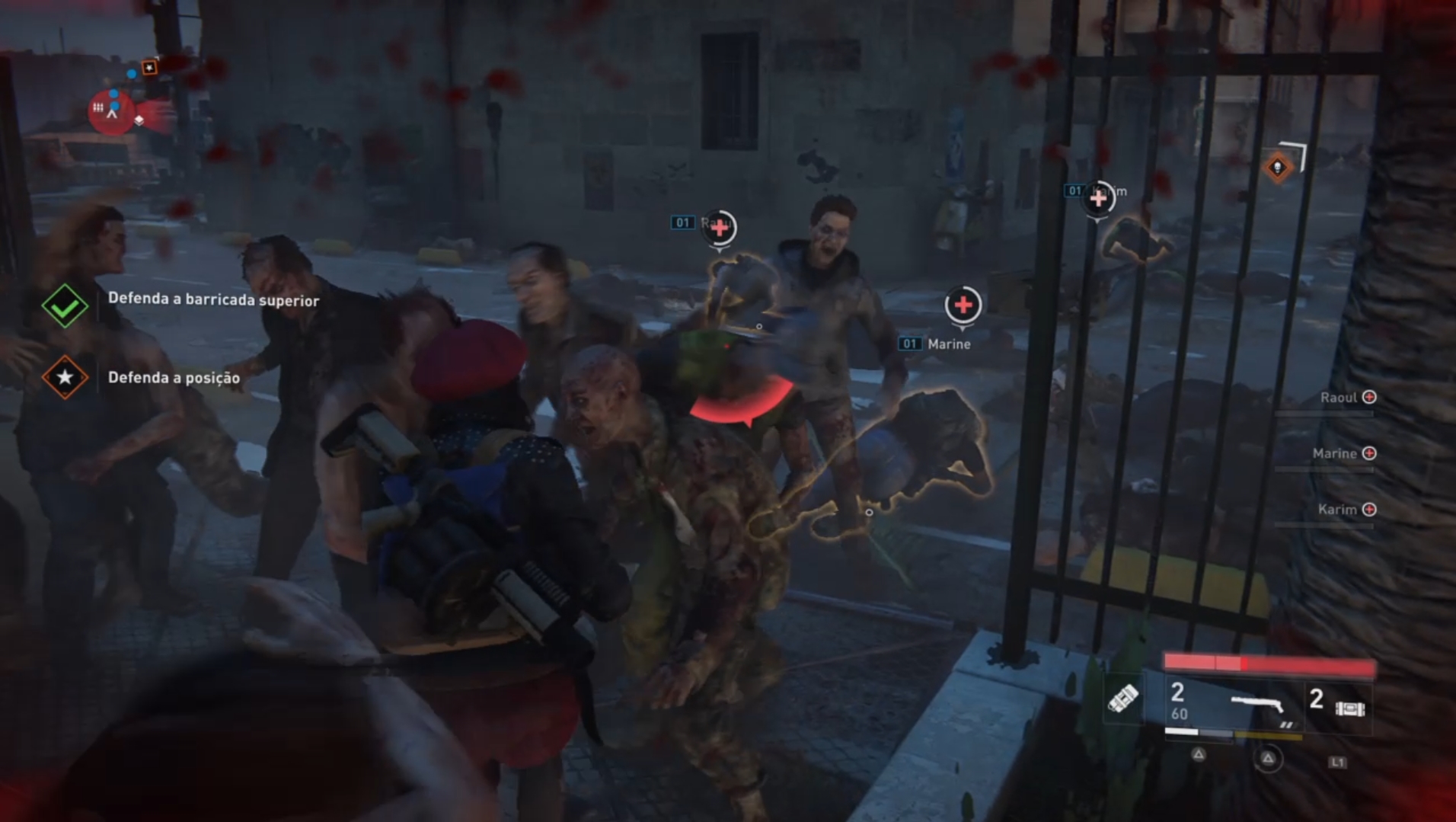 There’s nowhere to run and no one to save youSource: Francesco Casagrande / Voxel

Dead bodies and laughs with friends

Even with all the criticisms made so far, I must say that World War Z: Aftermath is a fun game, especially if the objective is to spend time with friends talking and killing some monsters. The repetitive construction of the “forward-protect-forward-protect” phases becomes less monotonous when debating life, the universe and everything else. 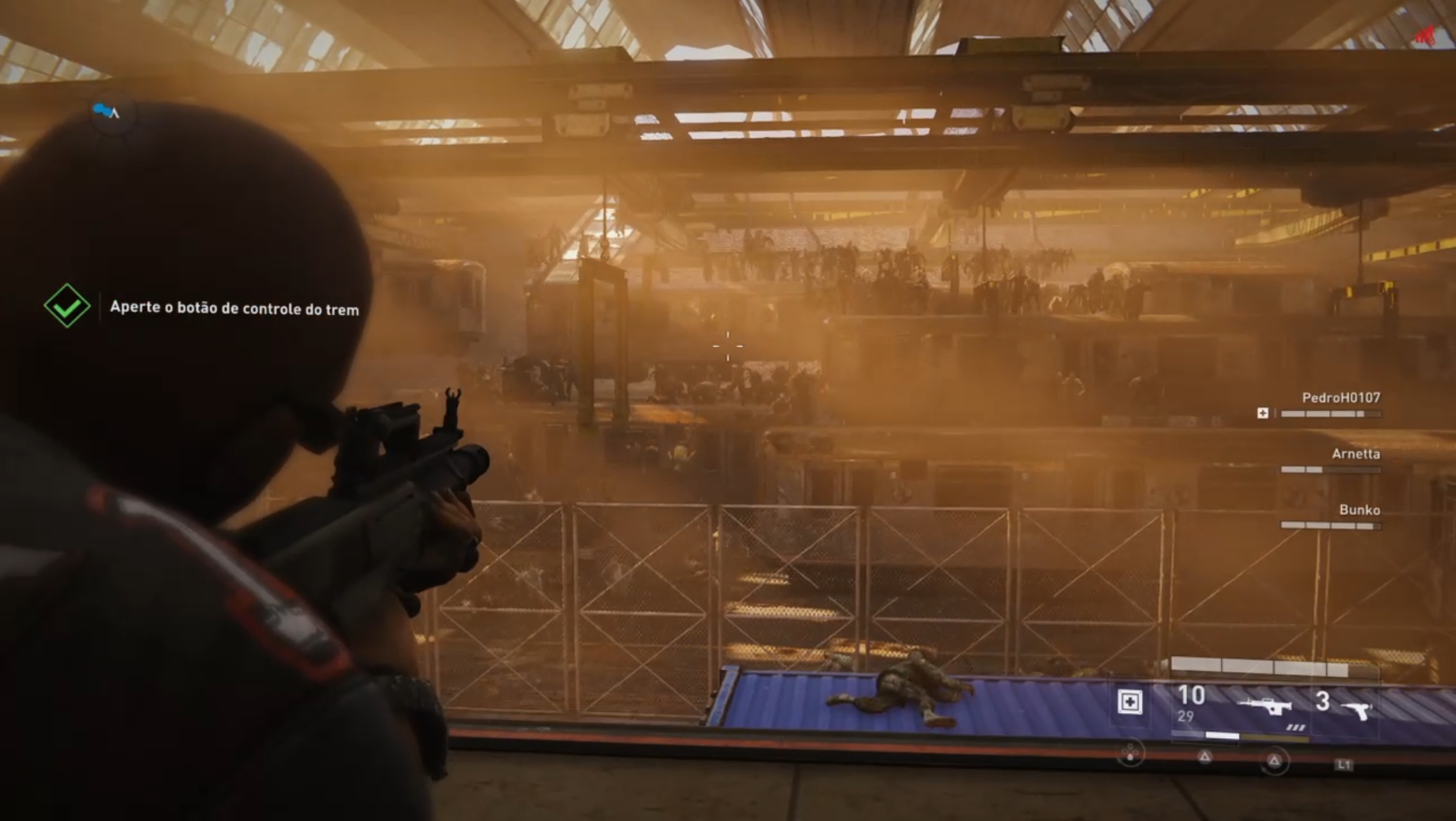 No worries, just a legion of zombies to be killedSource: Francesco Casagrande / Voxel

Playing alone turns out to be a little less fun experience, but one that can be enjoyed by listening to a podcast simultaneously or listening to that new album that you haven’t played yet. Does that mean the story is weak? Yes, but the focus of the game is really its cooperative gameplay.

And in case the more than 20 missions, which total approximately 12 hours of content, are not enough, there is still a horde mode, a challenge and even competitive multiplayer, which still yields a good amount of content time for those interested. 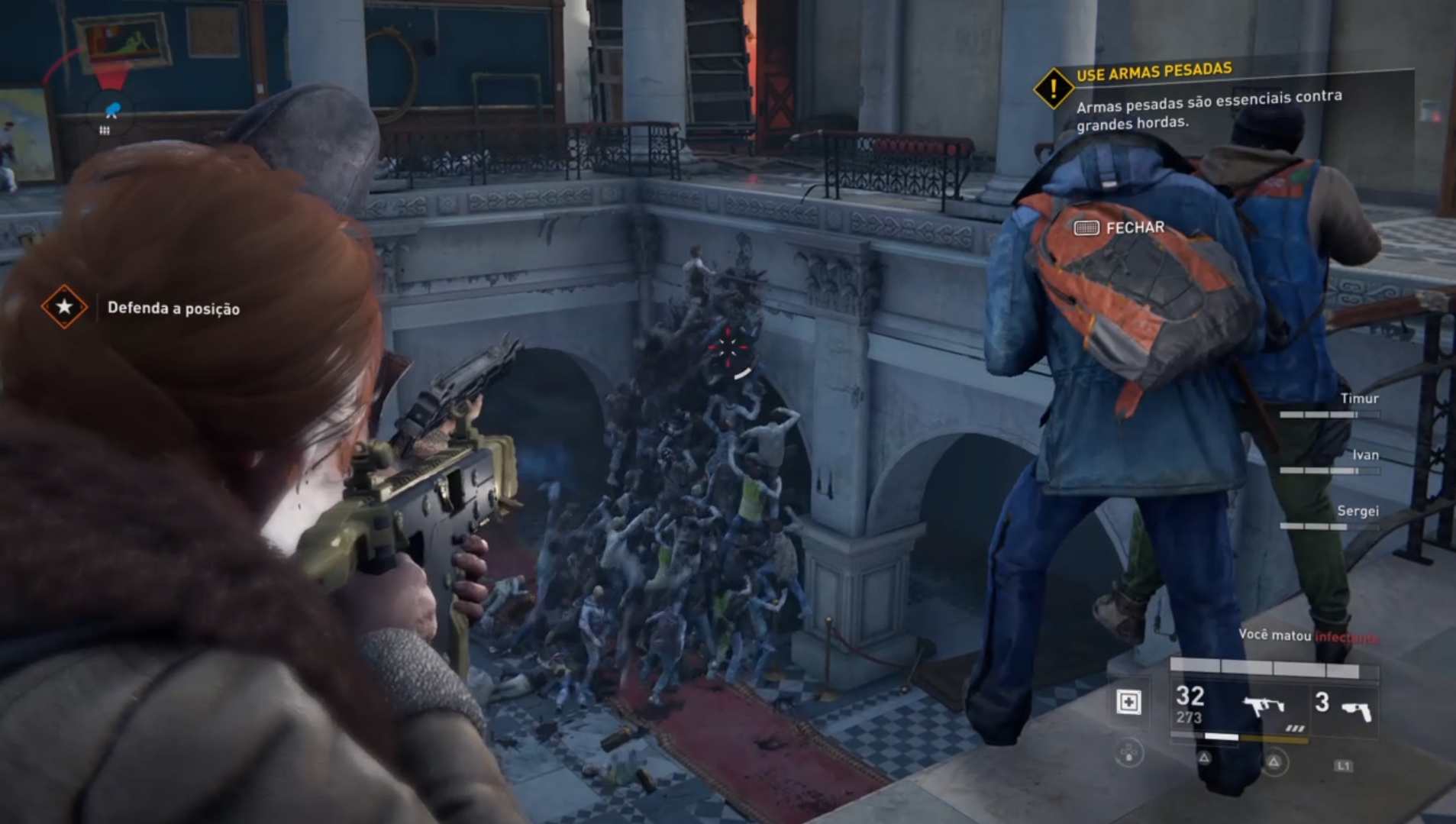 Close together eliminating the undead at the end of a tiring day of workSource: Francesco Casagrande / Voxel

If your troupe is looking for a fun and uncompromising adventure where the main objective is to shoot anything that moves and seems to have no life, World War Z: Aftermath is a great option, especially if you manage to uncover small technical problems here and there. With 3 new chapters, gameplay improvements and new characters, it has one more when compared to the original title. On the PC, the minimum requirements are modest and the price acceptable, but on the consoles the situation is different, with stores selling it above R$170.00.

World War Z: Aftermatch is for those who want casual fun with friends