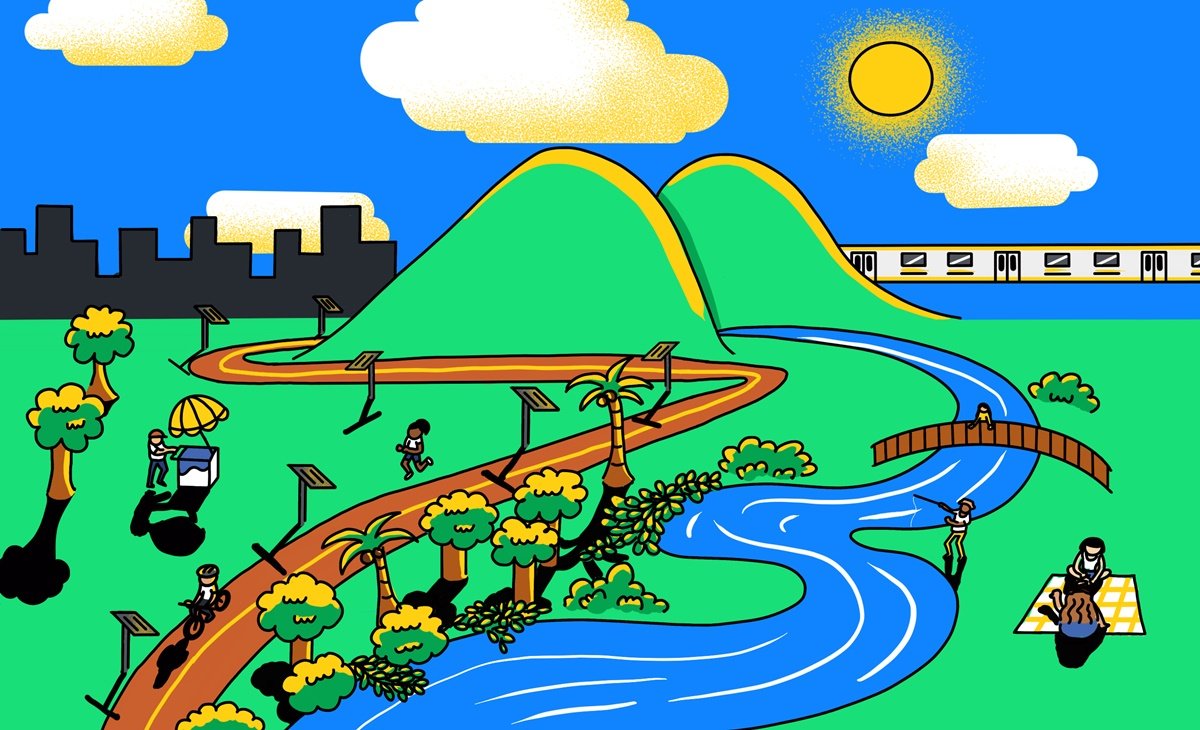 This text is the third part of a series of reports on lithium and the electrification of transport; learn more at the bottom of the page.

The replacement of vehicles powered by fossil fuels with electric ones holds the promise of a future with cleaner air from pollution and control of the damage caused by humanity to the environment. Electrified cars, however, are far from guaranteeing the reduction in environmental impact that we need on their own.

To minimize the impacts of transport on the environment, it is necessary to encourage active modes, such as walking and the use of bicycles (Illustration: TecMundo)

Before we continue, it is necessary to remember that electric cars are indeed less polluting alternatives to vehicles that use gasoline, diesel or alcohol to move. But experts caution that too much attention paid to the transition to electrified vehicles could overshadow even more sustainable modes of transport, such as walking and cycling.

A study published in 2020 in the scientific journal Nature Sustainability showed that electric cars emit less polluting gases in most parts of the world, even where the energy matrix is ​​still not so clean and renewable.

According to the article, signed by an international group of researchers, only in countries that massively use coal to generate electricity, such as Poland and South Africa, do emissions from electric cars get to be higher than those from powered cars. to fossil fuels.

This means that electric cars are good business for Brazil, a country that is known for having one of the cleanest energy matrices in the world – largely because of its use of hydroelectric power plants.

“Electric cars are not truly carbon zero. Mining the materials for your batteries, manufacturing the vehicles and generating the electricity they need produces emissions” (Christian Brand, physicist and researcher at the University of Oxford)

A survey released in 2021 by Ipea (Institute of Applied Economic Research), made with data from 2019, concluded that 45% of the Brazilian energy matrix is ​​composed of clean and renewable energy sources, with hydroelectric plants responsible for almost 30% of all energy. generation.

Still, electric cars may not be enough to deal with climate change. For Christian Brand, a physicist and researcher at the University of Oxford, incentives given only to electric cars can actually delay a move to eliminate emissions of polluting gases from transport.

“Electric cars are not truly carbon zero. Mining the materials for their batteries, manufacturing the vehicles and generating the electricity they need produces emissions,” Brand writes in a paper published by the university last year.

“One way to reduce transport emissions quickly, and potentially worldwide, is to switch from cars to active travel — walking, cycling and e-bikes. Active travel is cheaper, healthier, better for the environment, and not slower on congested urban streets.” 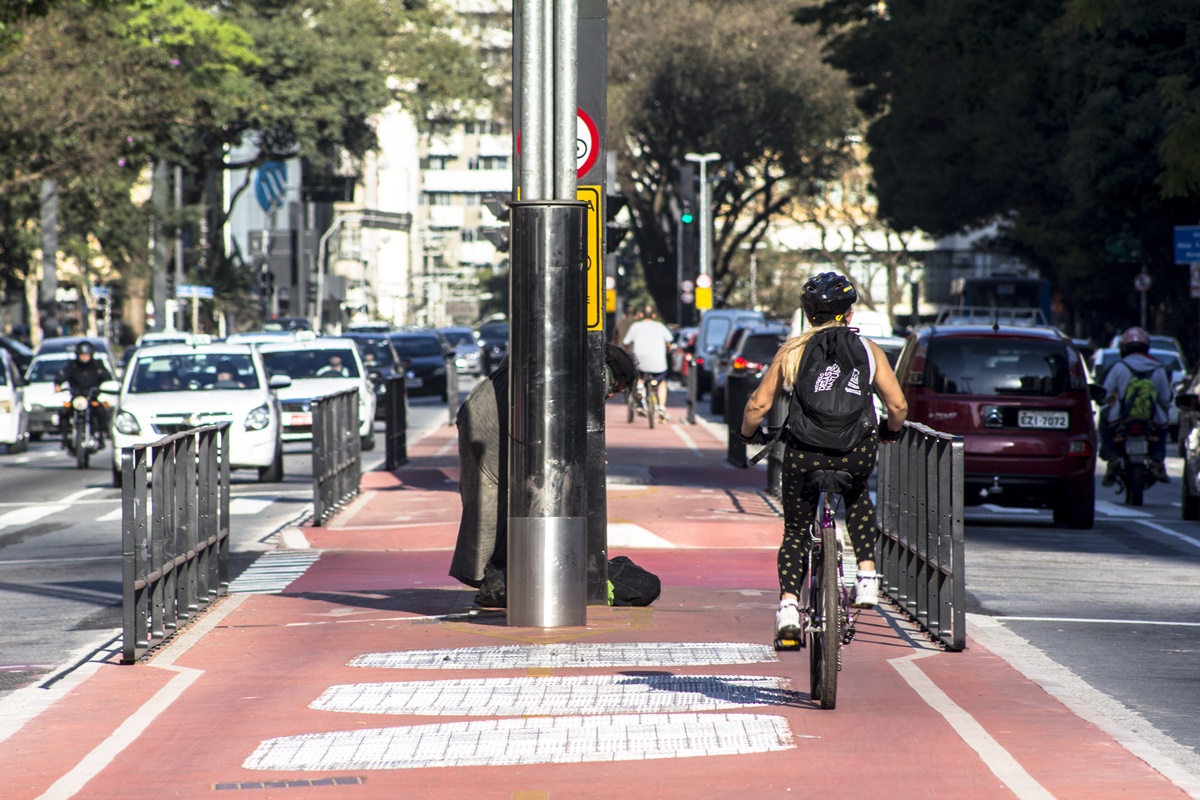 In an article published in February 2021 in the scientific journal Transportation Research Part D: Transport and Environment, Brand and a group of European researchers describe a study carried out in seven cities on that continent that showed that the emissions of polluting gases from people who commute with walking or cycling are 30 times smaller than those of people using fossil fuel cars.

The pollutant emissions from active trips were still 10 times lower than those from trips made with electric cars.

According to the researcher’s estimate, even if all new cars sold today were electric, which may only happen in the next half of this century, it would still take 15 to 20 years to replace the entire fleet of vehicles powered by fossil fuels.

For more active travel to be possible in cities, it is necessary to remodel the urban space, says Marcel Martin, architect, urban planner and coordinator of the transport portfolio at ICS (Instituto Clima e Sociedade).

“It is important not to bet that the electric transition will solve all the problems of transport and mobility” (Marcel Martin, coordinator of the transport portfolio at Instituto Clima e Sociedade)

“When we switch to the electric car, there is an immediate impact on air quality and on the reduction of greenhouse gas emissions, but we can miss a huge chance to rethink Brazilian cities, which are ‘carcentric'”, he says.

“The overall design is a tiny sidewalk and a larger space for cars and buses. The ideal would be to have wider sidewalks and bike lanes, exclusive lanes for buses and what’s left for cars”, says Martin. “The use of the car, as it is done today, transporting few people per vehicle, is very inefficient”, he says.

In this transition, the adoption of smaller electric vehicles, such as scooters, bicycles and motorcycles, in addition to expanding the reach of rail transport, with trains and subways, can collaborate.

“It is important not to bet that the electric transition will solve all the problems of transport and mobility. The poorest population will continue to lack access if there is no social perspective. Electrification often comes with a clean speech, of a perfect world, but this is the opportunity to rethink the use of cars, which have a huge urban impact”, says Martin.

This work was possible thanks to a grant for the production of journalistic works on science topics, which was granted by Fundación Gabo and Instituto Serrapilheira, with the support of the UNESCO Regional Science Office for Latin America and the Caribbean.

Read the other texts in the series