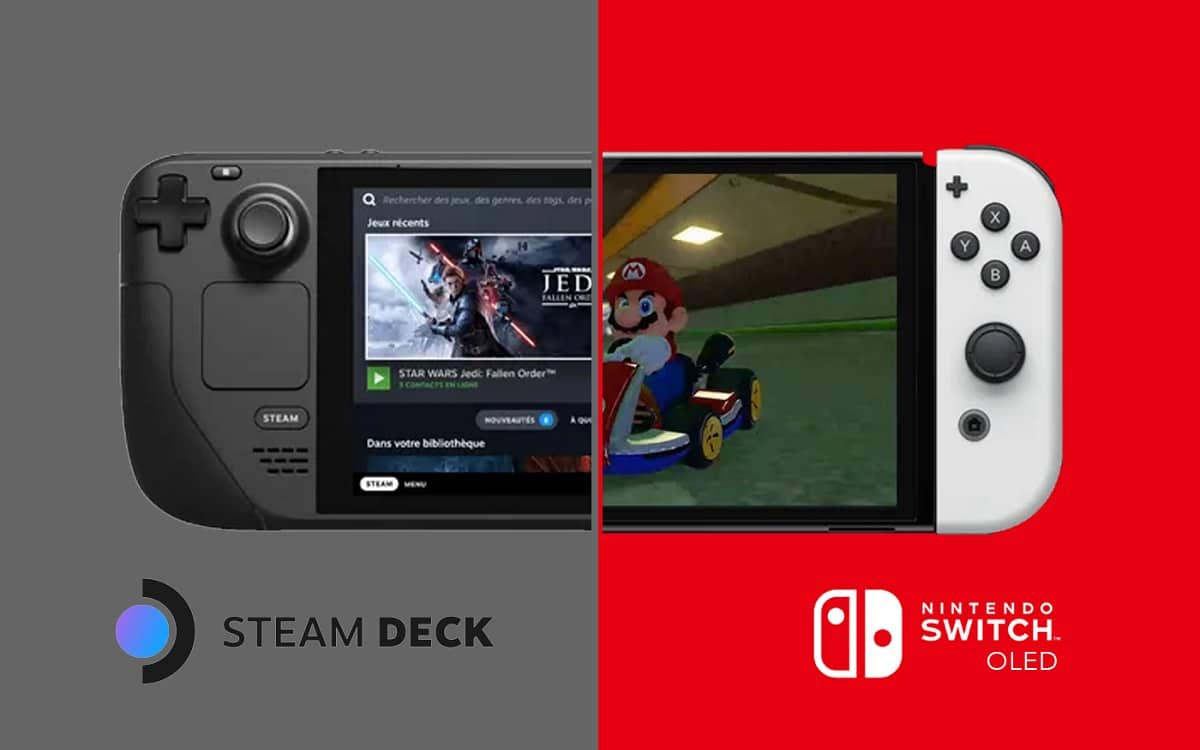 The Nintendo Switch OLED and the Steam Deck, the two recently unveiled portable consoles are also the most anticipated of the year. While Big N’s will be officially released on October 8, 2021, Valve’s Steam Deck is scheduled for December 2021. We invite you to see together what the differences are, between the two portable consoles, so that you can better your choice.

If 2020 marked the arrival of next-gen consoles with Sony’s PS5 or Microsoft’s Xbox Series X and S Series, 2021 will likely be the year of portable consoles: Nintendo with its new OLED Switch and recently, the surprise announcement from Valve that no one expected with the Steam Deck, the most powerful portable console ever.

In this article, we list the differences between the two consoles so that you can get a little idea and choose the one that best meets your expectations.

Steam Deck VS Nintendo Switch OLED: which is the best console?

Regarding the Nintendo Switch OLED, it incorporates an NVIDIA Tegra X1 chip composed of an ARM Cortex A57 CPU and a Maxwell GPU. Nintendo’s hybrid console therefore offers a theoretical gross power of 0.5 Tflops FP32, or three times less than the Steam Deck. That said, it has the advantage of being delivered with its docking station which allows it to be transformed into a living room console.

The Steam Deck should also be entitled to its docking station but it will be necessary to put the hand in the wallet to equip it. No price announced yet but anyway, it will be an expense that will be added to the already very steep price of the portable console from Valve.

Finally, it seems that the image quality remains the same on the console screen as it does on an external display. We must therefore be satisfied with an HD quality which does not already seem unconvincing to us on the small 7-inch panel, and which we can fear that it does not render very well on large screens. The Nintendo Switch even if it is less powerful than the Steam Deck seems from this point of view to offer the best “turnkey” solution for a much more affordable price.

If your budget is limited and you don’t have more than 350 euros to put in a portable game console, then you will prefer the OLED Switch to the Steam Deck. The starting price of 349 € for the Big N console will obviously suit the tightest budgets. Regarding the portable console from Valve, it is priced between 419 and 679 €.

It exists 3 Steam Deck models. Here are the prices announced for each available configuration:

Nintendo Switch OLED pre-orders are already open. You can reserve it now with all online merchants such as Fnac Darty, Amazon, Boulanger, Cultura …

Regarding the Steam Deck, the console was quickly a victim of its success during the opening of pre-orders on July 16 : from the first seconds allowing the console to be reserved, Valve’s servers encountered major problems, preventing a large number of players from acquiring the machine.

If many players could not order their copy, the scalpers had a blast. The console is now trading around $ 2,500 on eBay, even though it is still not available for sale.

Steam Deck vs OLED Switch: which one to choose?

While Nintendo’s OLED Switch broadly resumes the technical sheet of the 2019 version, if not more storage space, a screen that uses OLED technology and an improvement in the sound part, the differences with the future console from Valve are obvious.

The Steam Deck is geared towards gamers looking for portability and performance in games. while Nintendo’s OLED Switch is more family-friendly. Same use, therefore, but a different audience for the two future portable consoles. The very complete catalog of titles, whether on the side of Steam or Nintendo, however with exclusive licenses that have made the success of the Japanese manufacturer such as Mario, Zelda, Pokémon … Switch OLED or Steam Deck, for which are you going crack? Do not hesitate to leave your opinions in the comments.