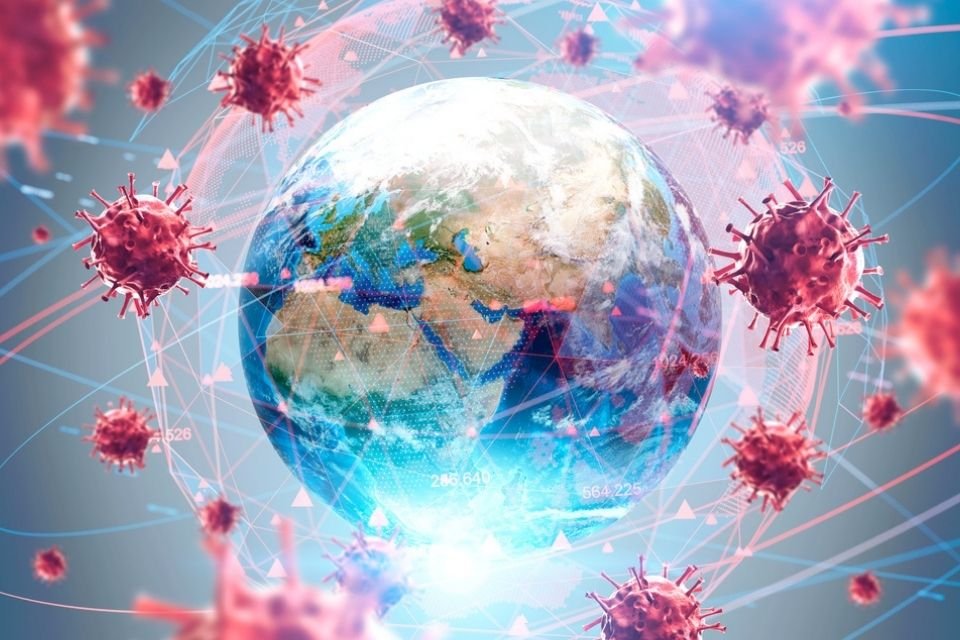 In August 2021, I dared to estimate that the end of the pandemic would be in the first half of 2022 in this article. And keep the projection. I decided to write part 2 to discuss the current wave for the omicron variant and what might come next.

A omicron, first described in South Africa, has dozens of mutations, many in areas to which neutralizing antibodies generated by vaccination or previous infection are directed. That is why this variant has a high capacity to cause so-called “escape infections”, when an individual who has been vaccinated or who has had previous exposure to the virus contracts the infection. This already occurred with the delta, but became more frequent with the omicron.

This characteristic, added to the expected decline in immunity over time, explains the new wave of cases in Brazil, as well as in much of the world.

But this new wave has a very particular context. The number of cases is much greater than the waves that preceded it, but hospitalizations and deaths do not rise in the same proportion. This is for two reasons: there is strong evidence that this variant is less virulent. There are changes in the cellular entry pathways that apparently make this virus more difficult to enter the cells of the lower airways, in the lungs. The second reason is immunity itself. Efficacy for preventing hospitalizations and deaths is more resilient than for preventing cases, remaining higher and falling at a slower pace.

After 6 months, the vaccine efficacy (2 doses) to prevent delta infection, hospitalization and death is 40-60%; 70-85% and 80-99%, respectively. With the omni, these efficacies drop to 0-10%; 30-35% and 40-70%. Fortunately, this drop in effectiveness with the omicron can be rescued with the booster dose (figure below). These are population data from the UK healthcare system — COVID-19 vaccine surveillance report — week 4 (publishing.service.gov.uk).

We cannot fall into the trap that the omicron is the “mild” version of the virus. The United States, for example, exceeded the number of hospitalizations in previous waves and is approaching the record of deaths. But how can that, since I just mentioned that the chance of hospitalization and death is lower. I was careful to emphasize earlier the passage “since the infection occurs”. Because the population risk, calculated by the incidence of the event divided by the population, is also dependent on the number of cases. To exemplify this, we consider that, after infection, the chance of death with the omicron is half compared to the delta.

If there are four times as many cases of Omicron infection, there will ultimately be twice as many deaths in total. According to the Institute of Health Metrics and Economics (IHME), the peak of cases predicted for the current wave will be 20 times the peak of the previous wave. Of course, most of these cases are not detected by surveillance systems, especially in Brazil.

Surveillance data from the UK show that at the peak of the virus prevalence, there was just over 6% of the population with the infection. If we extrapolate this prevalence to Brazil, there would be 12 million active cases at the peak. Considering that these cases contracted the infection in a distributed way a few days earlier, it is reasonable to consider that in just 1 day there would be more than 2 million new cases. The day with the highest incidence of reported cases in Brazil is no more than 200,000.

Considering that each country and state has different proportions of population vaccinated with two and three doses, suffered different impacts from the previous waves and have different proportions of the elderly population, it is to be expected that each location will be negatively impacted by the wave caused by the omicron. The good news is that the peak is very close, if not already. The positivity rate of cases is already falling. In Rio de Janeiro and Amazonas there is already a drop in the incidence of hospitalizations. The entire contingency plan of the health system and even the individual’s psychological state changes when the scenario is down. In the coming days this expectation should be confirmed.

But what to expect after this wave? Will there be another variant or will we move to the endemic phase?

First of all, there is already a new variant haunting Europe. An evolution of the original omicron, called BA.2, is already the main variant in Denmark and India, with rapid increases in South Africa and Sweden. It has already been identified in the UK and the US. In the graphic below, BA.2 is represented by the light purple color. 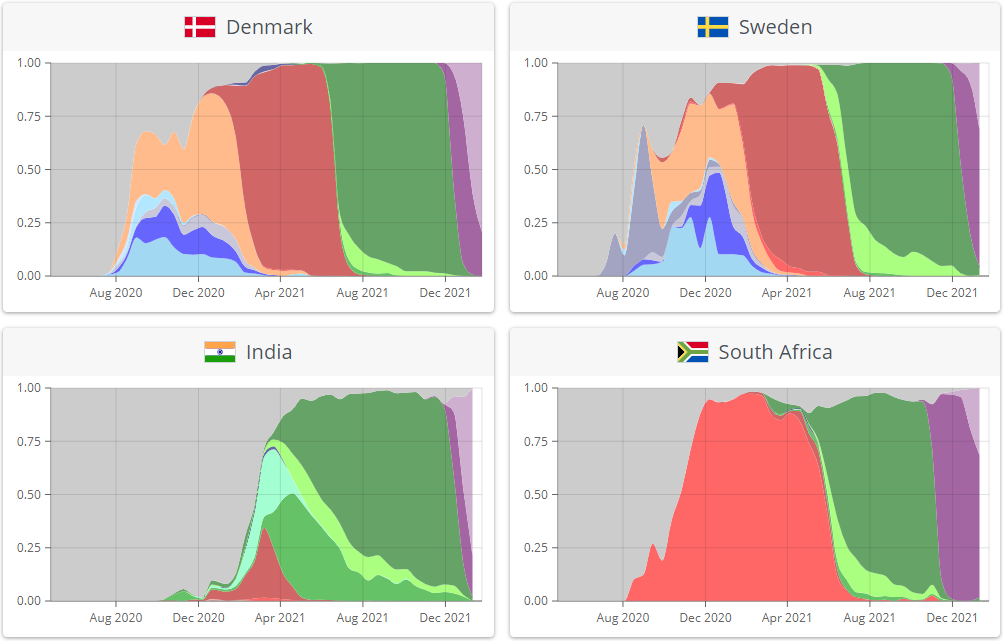 But that doesn’t mean the new variant will have repercussions. In reality, this is still uncertain. Some competitive advantage she certainly has. While there are indications that there is no significant escape from immunity, there is a considerable increase in transmissibility. Whether these characteristics will be enough to generate waves in places previously affected by the first version of the omicron, it is still too early to say. But even if this variant does not significantly change the landscape, there will certainly be new variants.

As we have only been living with Sars-CoV-2 for a short time — yes, from an evolutionary point of view, 2 years is not enough — the rules for the evolution of this species are not clearly established, which makes the production of new, more specific vaccines very difficult. the new variants and the prediction of the future.

By the way, it is precisely the predictability that will mark the transition to the endemic phase. There is consensus that the Sars-CoV-2 will continue among us. When will this take place? The concept of endemicity is relatively broad and includes having a predictable behavior over time. This occurs, for example, with influenza viruses, which characteristically have a seasonal pattern, with a predictable evolution of mutations, without significant changes in the virulence and behavior of known immunity. 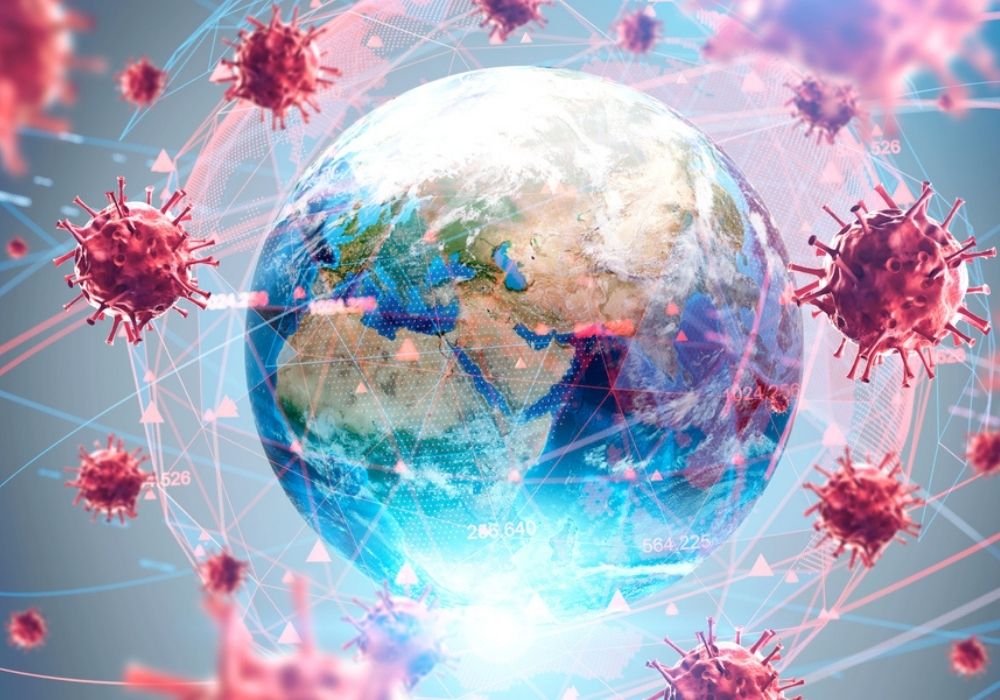 It is known the approximate portion of the population that contracts influenza each year, as well as the number of deaths. Another characteristic of an endemic disease is that great individual or social adaptations are not necessary to live with the pathogen. No one changes their travel plans or no location suspends school activities because the influenza seasonality will begin. But that also doesn’t mean that the endemic version of influenza is good, as are other endemic diseases or conditions. Influenza kills 650,000 people a year globally. THE human immunodeficiency virus (HIV) killed 770,000 people in 2019 alone.

Malaria claimed the lives of 409,000 people in the same year. Traffic accidents cause the death of 1.35 million individuals annually, and growing. Eight million die from smoking and more than 4 million from diabetes. These endemic diseases and conditions are definitely not good, we just get used to living with them.

Well, this transition from pandemic for endemic in the case of Sars-CoV-2 will not occur overnight. It will be a process. After the Spanish flu pandemic, in 1918, the waves in the following years lost intensity for 2 decades until they stabilized. Of course, in practice, the pandemic state had already ended, but the impact was still maintained for many years.

Another big question that hangs over is what will be the Sars-CoV-2 endemic? The influenza epidemic cycle is marked by affecting about 10% of the population in a 16-week period. It is estimated that the current wave of the omicron will affect 40-50% of the population of the countries that received it, in a period of 6 to 8 weeks. Will this be the behavior of the expected waves in the future? Will it happen once a year? Or two, three?

Will severity continue to decrease as we are re-exposed to the virus and vaccines? And will immunity become more resilient? Just as these responses must come from nature itself — and I hope they are good answers — new vaccines may be more efficient at blocking transmission and maintaining immunity for longer.

Despite the great uncertainties of the future, I venture to maintain the prediction that the end of the pandemic will be decreed by the end of this semester, on June 30, 2022. We now know that, in practice, it will be a transition that could last years or even decades. Endemic will arrive, but what makes me sleepy is that “endemic” is not necessarily a good thing.

***
Bernardo Almeida is an infectious disease physician and Chief Medical Officer at Hilab, a healthtech that developed Hilab, the first decentralized laboratory using remote laboratory tests. He is a specialist in infectology at the Federal University of Paraná (UFPR), with a residency in internal medicine and internal medicine at Hospital de Clínicas — UFPR and in infectology at Hospital de Clínicas — UFPR, currently studying for a master’s degree at UFPR in internal medicine, area of ​​infectious diseases. — Epidemiology of severe acute respiratory syndromes in adults. He has experience in the field of medicine, with an emphasis on clinical medicine and infectious and parasitic diseases, and participates in a research group in the area of ​​respiratory viruses.