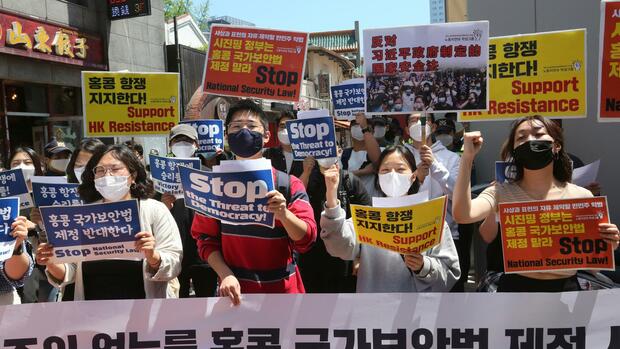 The Chinese government has obscured the circumstances surrounding the spread and transmission of SARS-CoV-2. This has promoted the course to a worldwide pandemic. In this situation, she is using weakened multilateralism to pass a new security law for the Hong Kong special economic zone in the shadow of the fight against viruses.

What the law means, however, is equally clear to everyone: Beijing indirectly but clearly defers the principle of ‘one country, two systems’. People in Hong Kong and Taiwan, but also in the neighboring countries of the South China Sea, are alarmed by the storm that is brewing towards them.

China is massively expanding its military presence and provoking on land, water and in the air. Beijing is trying to drive economically dependent countries, dumping artificial islands, sending planes into and into Taiwan’s airspace, and sinking Vietnamese fishing trawlers.

The Communist Party (KP) has become nervous because the international applause has waned in recent decades. There is now open resistance. In Africa there are loud protests against China’s credit policy and critical voices are also increasing in Europe. The Middle Kingdom is trying to destabilize free democracies with targeted disinformation campaigns.

In Italy, Germany was supposed to be discredited in the wake of the corona crisis – which, frankly, was not difficult due to the behavior of the federal government at the beginning of the crisis. The KP does not allow a breather after the corona shock slowly subsides and severe economic consequences are emerging.

It is more like the officials in Beijing are targeting this weakness. It is a welcome occasion to question Hong Kong’s unpopular autonomy. The terrifying naivety of the West and especially the Europeans towards China must finally be abandoned.

The government in Beijing continues to demonstrate in Hong Kong, as well as in Xinjiang and Taiwan, that it shows little sympathy for democracy and the freedom we shape when it is shaped. Beijing is working confidently and purposefully to become the world market leader in all important industrial sectors.

There will continue to be areas where collaboration is as useful as it is inevitable. But our gaze must now be guided by reason and inventiveness. We urgently need to ask ourselves how we can continue to face Chinese expansionism from a position of strength in the future.

There are loyal allies in the region

Asia, especially South and Southeast Asia, has more to offer than we all too often believe in politics and society. Because we could find loyal allies in the region whose ingenuity and experience could give us a strategic advantage in the medium term when dealing with China.

It is an economic area that extends from Pakistan to New Zealand. India, South Korea and the democratic states of the ASEAN network must be our partners of tomorrow, with whom we will face the challenges of our time, such as climate change, digitization and the preservation of free social systems under a market economy umbrella. This opens up an amazing best practice example that could serve as a precedent for the federal government.

We have had intensive and friendly relationships with Japan for some time now, which is not only a trading partner but also a value partner in the Indo-Pacific region. While in this country there is almost a real argument about whether ideology or technology is the best answer to climate change, Japan shows how such an approach is implemented in practice.

In Japan, the use of hydrogen technology is being pursued very resolutely so that emissions from traffic fall to zero. The Japanese way thinks economic prosperity and ecology together. It is a successful model.

The truth is that not all states in this region are thoroughly liberal and democratic. It is all the more important to make decisive advances here by aggressively representing our value- and interest-based foreign policy.

There has to be a difference between who enjoys a much more intensive diplomatic and economic cooperation with the EU and who does not. The core brand of our foreign policy must be a positive correlation between democracy and economic and diplomatic proximity.

The German government must use its EU Council Presidency to ignite a “diplomatic firework” so that we can work more closely with our value partners in South and Southeast Asia and encourage other countries to participate in the Democratic Alliance.

The federal government’s prestige project, the planned EU-China summit in Leipzig in autumn, is being postponed due to the pandemic. The German government never tires of emphasizing that the reason for the postponement can only be found in the fight against pandemics and not in a political signal against China’s aggressive approach against Hong Kong and Taiwan.

With this, the federal government misses its chance. Here she should have clearly criticized the massive encroachments on freedom and democracy and should have preferred to refuse on these grounds. Instead of this flexible backbone, I expect attitude and determination.

More: Why the German economy demands a commitment to free trade from the federal government

Frank Müller-Rosentritt (37) has been a member of the Bundestag since 2017 and a member of the Foreign Affairs Committee for the FDP parliamentary group. There he is responsible for the region of South and Southeast Asia, including China, India and Japan. Müller-Rosentritt is chairman of the Saxon FDP and sits on the city council of his hometown Chemnitz, which is also his constituency.