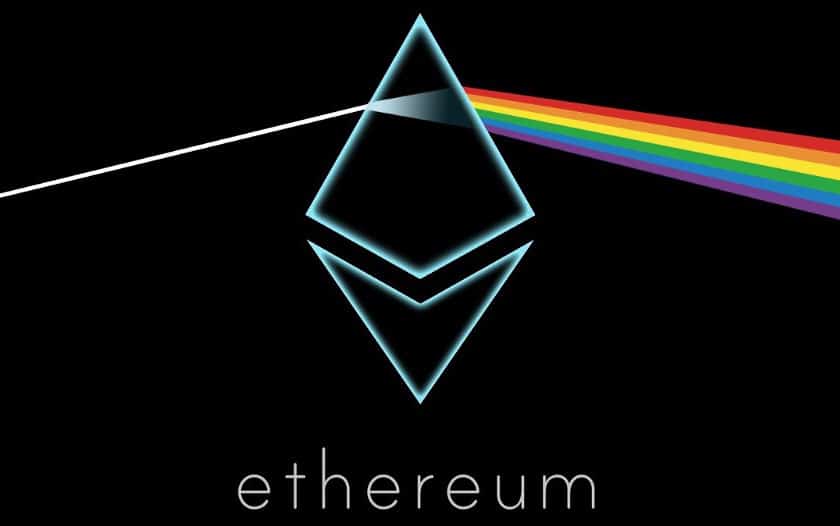 Ethereum is, after Bitcoin, the other “crypto-star”. Also based on the Blockchain system, Ethereum differs from the latter by the fact that it is not just a cryptocurrency but a platform for exchanging NFTs and setting up smart contracts. Here’s everything you need to know about Ethereum in 2021.

Ethereum is recently as much talked about as Bitcoin: it is because the value of its course, or rather, to be exact, that of Ether, the cryptocurrency that uses this blockchain, is flirting with 1000 euros. Ethereum is a decentralized exchange protocol that enables the creation of smart contracts, their automated verification and enforcement. Ether allows the payment of these contracts. It is by volume the largest decentralized cryptocurrency with more than 100 billion euros of capitalization.

More flexible, useful and scalable than Bitcoin, but also more transparent (after all we know until its young creator Vitalik Buterin), Ethereum seduces far beyond speculators. It is indeed possible to program contracts using a Turing-complete language, which means that Ethereum applications are potentially universal for all situations involving trust between two actors and any transaction. Insurance companies, in particular, are implementing Ethereum to reduce costs and improve the payment of claims to their customers.

Ethereum: what is it?

When we talk about Ethereum, we often think, because of the craze around cryptocurrencies, of its virtual currency, Ether (Ξ). But Ethereum is not limited to a simple unit of value. We told you, Ethereum allows the execution of “smart contracts“. What is it about ? Imagine: you want to raise funds via crowdfunding but don’t want to go through an existing crowdfunding platform like Kickstarter or IndieGoGo. All you need to do is program an Ethereum smart contract with your funding goal and terms.

Since this contract is based on the blockchain, anyone can go and check the conditions of execution of the contract. Its goal is to collect the sums of the people who invest in your Ether project. When the contract objective is reached (for example you have reached the sum of 10Ξ), the money is automatically released and transferred to your wallet. Computing power is provided by miners, and the programming language is said to be Turing-complete – to put it simply, it just means that you can program just about anything and everything in it.

And that is precisely what is interesting. Insurance companies like Axa and Allianz use Ethereum because it allows them to significantly reduce their costs while improving the efficiency of claims. Axa, for example, uses Ehtereum to automatically compensate delays in aviation: as soon as a delay is detected by the contract, it automatically compensates the customers concerned, without any human intervention. We can see, therefore, the utility of Ethereum goes well beyond its cryptocurrency, Ether. And this is what makes Ethereum particularly interesting.

What are NFTs and why is everyone talking about them right now?

We told you, Ethereum allows you to create smart contracts. But also NFTs, in other words non-fungible assets. A good is said to be fungible when it is defined in relation to the category to which it belongs.

Ether, Bitcoin, or money in general, are fungible goods. They are interchangeable and a bitcoin or a banknote of a given value always has the same value when exchanged for another unit in the same category. On the contrary, non-fungible goods are those which are defined by their own characteristic.

Works of art are notoriously NFTs. But the fact that everyone can create them, and can set up platforms to exchange them, creates new possibilities. This is how, for example, the Cryptokitties site was born, where Internet users buy and auction randomly generated drawings of kittens.

Most recently, Elon Musk threatened to sell one of his tweets as an NFT before retracting after an offer worth more than $ 1 million.

Who is Vitalik Buterin, the originator of Ethereum?

If you’re interested in Bitcoin, you’ve probably heard of Satoshi Nakamoto, its mysterious creator. It is a pseudonym, and its real identity remains a mystery. Many suspects have been found in recent years including Elon Musk, the South African entrepreneur quasi alter-ego of Tony Stark in Iron Man, already behind PayPal, SpaceX, Tesla, hyperloop and Boring Company. But this is just one theory among many.

The contrast is stark with Ethereum: no crazy theory gossip, or other speculation – its young co-creator Vitalik Buterin has been advancing from the start with his face uncovered. He also speaks regularly on social networks without failing to scratch competing cryptocurrencies which, according to him, lose sight of their usefulness – which would make them, to believe it, more dangerous. Vitalik Buterin is only 23 years old. He explains on his website that he was born in Russia in 1994, then moved to Canada in 2000 where he grew up.

We also learn that he played Word of Warcraft a lot between 2007 and 2010, before suffering a sanction from Blizzard which made him “realize with horror what centralized services can do“. The following year, he discovered Bitcoin, and became more and more interested in it. He ended up writing on a blog before co-founding Bitcoin Magazine. In 2012 he entered university, but dropped out the following year, realizing that his crypto projects took him over 30 hours a week.

He explains : “I then traveled, explored many crypto-projects and then I finally realized that they were all too preoccupied with specific applications instead of seeking to become sufficiently generic – this is the reason for the birth of Ethereum“. He is not the only one involved in the project: Steven Nerayoff, who made his fortune by opening an iOffer trading platform in 2002, has also invested heavily in the project and is therefore often referred to as his “co-creator”.

* All * crypto communities, ethereum included, should heed these words of warning. Need to differentiate between getting hundreds of billions of dollars of digital paper wealth sloshing around and actually achieving something meaningful for society. https://t.co/aNpEnBNGsA

* all * crypto communities, ethereum included, should consider these words of warning. You have to differentiate between getting hundreds of billions of dollars of wealth spilling around you and actually doing something that makes sense for the company.

As with all cryptocurrencies, opening a wallet is free and open to everyone without conditions. For this, we can rely either on a cloud service (not recommended because of the risk of piracy), or a smartphone application (not recommended for large sums), or an application on PC, Mac and Linux (preferably, put the bulk of your savings to store on a computer permanently disconnected from the Internet), or a hardware solution. We advise you in any case never to opt for a wallet that does not let you control your private keys yourself.

1. Choose your wallet application or solution

Although there are many, we will not recommend any too risky cloud solution here. First, let’s mention hardware and offline solutions – the best for security. There is for example the Ledger Nano S, a physical wallet in the form of a kind of USB key sold for around sixty euros. This allows you to store your Ether, and to spend it using your private key. It is an extremely secure solution.

For your computer, we recommend Mist, the official wallet for Ethereum. This solution has the advantage of supporting smart contracts. On Android and iOS smartphones and tablets there is Jaxx which supports 13 cryptocurrencies (including Ether).

2. Buy Ether on a platform

Of course, money does not fall from the coconut palms;) So you have to buy Ether on an exchange platform. They are relatively numerous. Please note: they often offer to create a wallet. As we said above, these are necessarily cloud solutions. In case of hacking (unfortunately the history of cryptocurrencies is littered with it), you risk losing your money forever. Here is a non-exhaustive list of services accessible in France:

Of course, during the purchase, it will be necessary to specify the address of your Ethereum wallet that you obtained during its creation.

3. When making a payment, choose the costs intelligently

There are fees during payments, returned in Gas, an internal unit to remunerate the miners. The transaction cost is currently very low (a few cents), unlike Bitcoin (around 20 euros). You can define the amount of these fees yourself: paying more means having priority and therefore a faster transaction. If you run out of funds during a transaction to pay the miners, the transaction will be canceled.

With Ethereum, we have more and more the choice between using it as a means of payment, to invest in contracts, or to invest in Ether. It is therefore advisable to look as much at investing in contracts as in Ether if your goal is to play speculation. In the case of Ether, investing is classic: you just have to open a wallet (we will see how to do this in the next part), and buy Ether on your favorite exchange platform ( Coinhouse, Coinbase, etc…).

It is possible to buy Ether directly against euros or against other cryptocurrencies, including Bitcoin. Contracts are also interesting, especially since we are only just beginning to realize their potential. There have been few examples so far, but we can cite CryptoKitties: an Ethereum-based site where you can buy, sell, and breed virtual kittens. Forget about kittens for two seconds: they are really just contracts, the value of which is defined by scarcity and their exchange value at any given time.

Very quickly madness seized CryptoKitties, some kitties reaching completely crazy values ​​and significantly boosting Ether exchanges on the blockchain. Be careful, all the same: in the case of CryptoKitties, we are in the case of contracts that are useless. Their value can therefore drop completely to even reach 0! Suffice to say that there is only speculation here. It would be quite another thing if the contracts in question had a real purpose.

As the Americans say, There’s a new kid in town. Bitcoin is a revolution in itself, but Ethereum should not be underestimated either. The idea of ​​creating a more general, and universal, system beyond simple cryptocurrency is undoubtedly a guarantee of confidence in the future of this platform. Not only is it possible to invest Ether, but also in smart contracts. The latter are of interest to a large number of institutional players who find in them a simple solution to extremely complex problems – notably, for the moment, in the insurance sector.

Also read: Bitcoins, Ethereum and taxes – tax reporting is mandatory, here’s what you need to know

A virtuous circle therefore seems to be taking place around Ethereum. Steven Nerayoff believes that the exponential proliferation of projects around Ethereum and its smart contract system may lead to “double or even triple”The value of Ether in 2021. Of course, as with all cryptocurrencies, it is better to remain cautious and only invest amounts that are not directly needed.