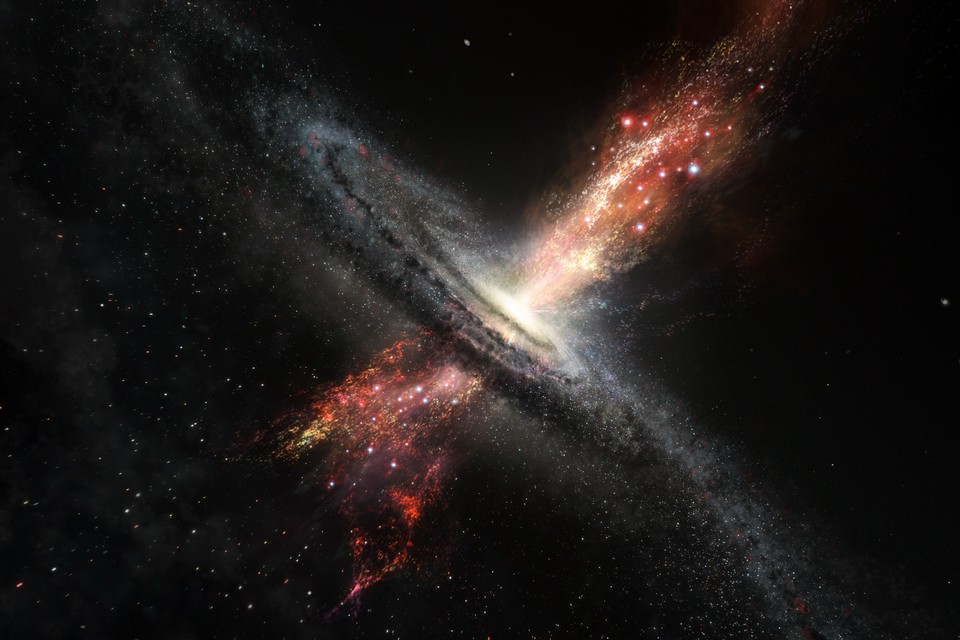 According to Einstein’s theory of general relativity, a supermassive dead star could shrink to a point so dense that even light would not escape: in the center, gravity, so gigantic, would curl space infinitely; matter would be infinitely dense. This apparent absurdity is known as singularity. This is a black hole.

If in 2019 NASA released the real image of a black hole, this year it was the turn of a simulation of what would be the structure of a singularity, based on the images captured by the New Horizons probe.

According to the astrophysicist Jeremy Schnmittman, author of the simulation, it shows how the captured matter is concentrated around the event horizon, forming an extremely hot and thin alo, called an accretion disk. The deformity that surrounds it is caused by the overwhelming gravitational force, which ends up even bending the light itself.

Near the black hole, the gas orbits at almost the speed of light, while on the outside it spins more slowly. This difference is responsible for producing light and dark bands as seen in the image.

The so-called photon ring is made up of several rings, which become increasingly weak and thin – the effect is caused when light circles the black hole several times before it can escape and be seen. Inside is the shadow of the black hole, an area approximately twice the size of the event horizon – the point of no return, from which nothing escapes, not even the light.

How do they form?

A black hole is born from the collapse of a supermassive star. During its life, this giant sun obtains energy through nuclear fusion, transforming hydrogen into helium; when the first one ends, it uses helium to produce lithium, and so on. What keeps the stars stable is the balance between the gravitational force, which pulls everything towards the center of the sun, and the pressure that causes the gases to expand; the higher the temperature, the greater the pressure.

The last of this long chain of transformations is iron, a stable element that consumes energy to be forged. Its formation is rapid (the nucleus can turn into iron in a few hours) and leads to a sudden cooling of the star’s heart. The pressure drops sharply, the balance falls apart, and gravity begins to pull the outer layers towards the center of the star.

The iron core does not support the weight of the upper layers and ends up so compressed that protons capture electrons to form neutrons. This incredibly compact new heart can withstand the pressure of the outer layers.

The strategy survives the nucleus, but not the rest of the star: the gas layers, drawn to the center, collide with the heart of the red supergiant, producing a shock wave that ejects them into space: the star explodes in a supernova.

The nucleus will have two destinations, sealed by their mass. If it can contain the gravity that pulls everything to the center, it will stabilize like a neutron star. If it has a mass greater than 2.2 times that of our Sun, the neutron star will continue to collapse and form a black hole.

Can a black hole die?

Yes you can. Hawking radiation is thermal radiation that is believed to be emitted by black holes. It is named after the English scientist Stephen Hawking, who elaborated the theoretical arguments for its existence. Since Hawking radiation allows black holes to lose mass, it is assumed that those who lose more matter than they gain by devouring what passes ahead will evaporate, shrink and finally disappear.

Is there only one type of black hole?

To date, astronomers have only managed to find two types of black holes: those that originate from the collapse of stars, five times the mass of the Sun, and supermassive giants, roaring in the center of galaxies (the Milky Way has one, called Sagittarius A *) product of billions of years engulfing star mass and joining other black holes – but none with an intermediate size.

Are black and worm holes different?

Both are incredibly dense and exert gravitational pull accordingly. The difference is that, in theory, nothing escapes a black hole (the speed to escape the event horizon would have to be greater than the speed of light), while a wormhole would be like a shortcut within the space-time between two points of the cosmos or even between universes. And if you’re wondering who swallows whom: black holes fall into wormholes.

What if we were to fall into a black hole?

If we follow movies and books, you would be crushed and stretched like spaghetti. But, according to physics, that would not be the case. The instant you entered the black hole, reality would split in two. In one, you would be instantly incinerated, and in the other, you would float towards the black hole completely unscathed.

As you are sucked into the black hole, you notice that space becomes increasingly curved to infinity – at that point, you have reached the singularity, where space and time are meaningless and the laws of physics as we know them no longer apply.

If you were in the company of someone, the other person would see, in horror, you stretching and squirming, and the closer to the event horizon, the more slowly you float. Then she would see you static before being reduced to ashes, then disappearing into the bowels of the black hole.

But you don’t feel any of that, as you float towards the greatest villain in the Universe, gliding in free fall. The event horizon exists only for those who are outside; for you, there is nothing. If the black hole is big enough, you could live the rest of your life normally before you die in the singularity.

This is due to the paradox that physicists cannot unravel: for the person outside, you have become ashes. For you, inside, everything is fine. That’s because quantum physics dictates that information can never be lost, that is, every piece of information that explains its existence has to stay outside the event horizon so that the laws of physics are not broken.

These same laws require you to float across the event horizon without being incinerated. Otherwise, you would be violating the theory of general relativity. What’s more, there is a third law of physics that says that information cannot be copied, that is, you have to be in two places at the same time. This is the black hole information paradox.

What do we still not know about black holes?

Among so many things, the main one is how to solve the above problem. Only three aspects define a black hole: its total mass, its electrical charge and its angular momentum (or spin, a physical quantity associated with its rotation).

No matter what it has swallowed (stars, planets, gas, alien plasma, entire galaxies): the black hole will reduce this immensity of information to just three: mass, charge and spin.

The fate of black holes, according to Stephen Hawking, is to emit thermal radiation – to evaporate, shrink and disappear, leaving a void in space and taking with it the information of everything it swallowed in billions of years. A clue to solving this mystery may lie in the hair of a black hole, but that is another story.