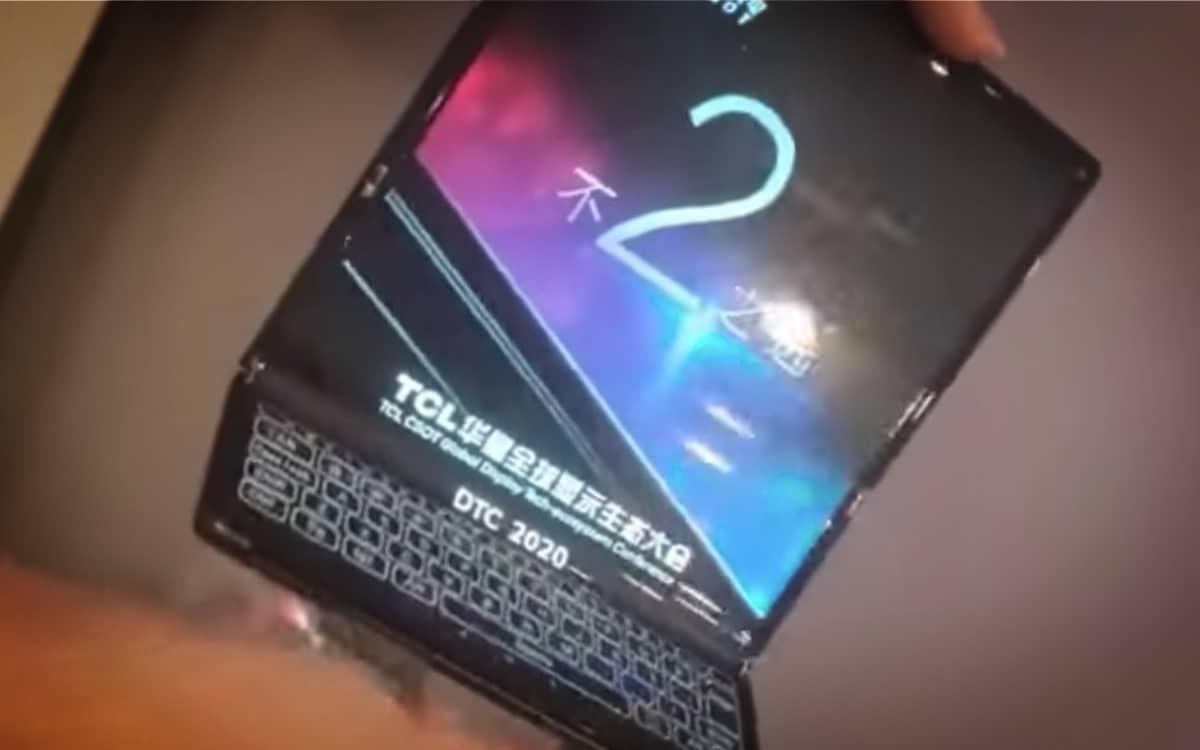 TCL is visibly preparing an innovative foldable tablet that folds in three, with a semi-physical keyboard that folds down like a screen protector. The tablet in question should have a foldable 10.1 ″ screen. Unlike the tablet seen in the Westworld series, TCL’s concept is less symmetrical, with a hinge in the middle and a second in the middle of the second half of the screen.

When we think of the first foldable smartphones, we often think of Samsung and its Galaxy Fold. The manufacturer is indeed the first to sell this type of device on a large scale. But it should not be forgotten too quickly that the real pioneers of the technology are much less well known. We are thinking in particular of the Royole Flexpai, as well as prototypes of TCL foldable smartphones that we saw in 2019 on the sidelines of the IFA and our first use of the Galaxy Fold. TCL has very good reason to be a brand little known to the general public. Its products often carry another brand, such as BlackBerry, Alcatel, Thomson, or even IKEA. The products and concepts developed by the manufacturer thus have a chance of ending up on the market sooner or later under another name.

It is therefore in this context that a leaker, Fold Universe, posts the video of a amazing new product from the manufacturer. We discover what looks like a new tablet with two hinges and a kind of keyboard that is placed, as needed, on the screen. Unlike the futuristic foldable tablet that we see many times in the Westworld series, TCL chose to place the two hinges asymmetrically. The first hinge is thus implemented in the middle of the smartphone, which divides it into two parts. The second hinge is placed in the middle of one of these parts. The other difference from the sci-fi series tablet is that the last hinge seems to have more a utilitarian aim than a really ergonomic one. The quarter screen that it defines is used exclusively to display a keyboard, with a sort of removable protection that can go over it, presumably to give the keys a more pleasant feeling and close to a real keyboard.

It is thus possible, once the shelf is unfolded, to fold back slightly only the last quarter, which instantly turns the device into a kind of laptop. To store the tablet in your pocket (if you wear very loose clothing) or your bag (it seems more reasonable given the size), only the central hinge makes it possible to really fold the main screen on itself. The tablet is then half of its unfolded size. We then discover that TCL has integrated a large secondary screen over practically the entire remaining surface once the device is folded up. The size of this screen seems large enough not to necessarily have to open the device each time. Even if we have the impression, watching the video, that TCL’s interface prefers to present useful information such as time, date and weather – and that it is suddenly not said that we can ultimately use this screen completely freely, at least when the product is released.

Also read: Apple would replace the iPad Mini with a foldable iPhone compatible with Apple Pencil

The leaker has fun in passing by putting us on the wrong track. We can read in the description of the video: “Could this be the Galaxy Z Fold 3 with a sliding screen? OR a prototype of TCL? ”. Of course, in case you have any doubts we can see the TCL inscription on several images which leaves little room for doubt. It remains to know what constitutes this device on the side of the technical sheet. It seems to believe of patents filed by TCL that the tablet’s main screen is 10.1 ″ which, if confirmed, would make it the largest foldable tablet on the market. It is also not certain that this model, in particular, will lead to a product for the general public. It seems that many aspects of the proposal seem awkward. For example, if you are using the tablet in “computer” mode, a small kickstand helps the device stand upright. Which does not seem to give the object a certain precarious dimension. Likewise, the narrowness of the keyboard is questionable: wouldn’t it have been simpler and more ergonomic to arrange the hinges symmetrically, as on the tablet shown in the Westworld series?