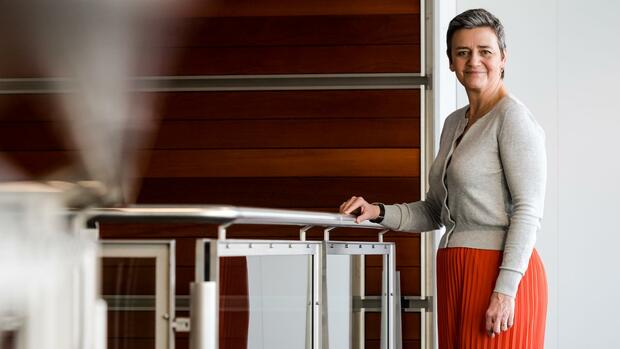 Margrethe Vestager wants to defend the decentralized, uncontrollable Internet against competing ideas. Plans by the Chinese company Huawei for a new version of the Internet encouraged them to defend and develop existing systems, she said at an “Ada” event.

Vestager also wants to adjust the regulation of content on Internet platforms: “Posts that would be illegal in the real world must never be accepted online,” she said. The Commission is currently testing the idea in a public consultation that discussions about the whereabouts of contentious online contributions can be discussed. Vestager emphasized that it is particularly important that companies that offer digital services in the European Union are also registered there, so that the authorities can enforce the law.

Ms. Vestager, what is your vision of a sustainable and digital Europe?
We have to make the best use of digital technologies to fulfill our dreams. I am thinking, for example, of equal access to health care and education, more social integration and a better balance with nature in order to combat climate change. We can make society much better without turning it into a technocratic society.

What are the strengths of the European handling of data for you?
Our foundation is fundamental respect for the individual. We see people not only as a raw material for technology, but as citizens with rights and individuality. That is why we can create our databases differently and ensure trust in the technology. People feel much more comfortable with technology when their fundamental rights are respected: by the people who create the technology; the legislature that gives it the legal framework; the authorities that monitor compliance with the law; and the entrepreneurs who drive them forward. Many people admire this European approach.

This approach does not allow data monopolies. Will the upcoming EU lawsuit against Amazon set a precedent?
I justified this when the procedure was opened. Amazon has a dual role: as a retailer, it sells goods itself; as a marketplace, it offers independent retailers the opportunity to sell their products directly to customers. Amazon continuously collects data. Our analysis suggests that Amazon collects competitive information in all of these transactions. E-commerce has brought many advantages to competition in retail, selection and pricing. But data plays a central role in all of this. We must therefore ensure that large platforms do not negate these advantages through anti-competitive behavior.

Could Amazon be smashed one day like the US oil company Standard Oil?
I talked about that recently at the Web Summit in Lisbon. There is a risk that breaking up will not solve a problem, but may even create new ones. However, when a company grows as big as Amazon, it also has a corresponding responsibility because it actually defines the conditions of an entire industry. That’s exactly what we have to look at.

China wants to become an AI superpower. How can Europe keep up?
Of course we have to invest a lot more, otherwise nothing will happen. And we need real figureheads, because talent always attracts other talents. But that does not mean that we can be more decentralized in a way. I recently visited a small Danish hospital that specializes in cancer patients. With AI, the doctors wanted to reduce the waiting time between the examination and the diagnosis. As a result, they were able to evaluate 23 different tests within an hour and give the patients certain probabilities, which they then discussed with the doctors. The example shows: AI can help people in need. Basically, it is always about money, but also about certain skills.

“Technology with transparency is crucial”

Chinese company Huawei recently released plans for a completely new version of the Internet. Are you afraid of ideas based on nationalist ideas?
On the contrary. It encourages me to defend and develop our system. The amazing thing about today’s Internet is that it is open to everyone and is really global. The ideas that you address stand for the opposite. And I am confident that our path will find a lot of support. We stand for an Internet that not only enables researchers to collaborate internationally and companies do international business – but also citizens digital access to our planet.

Do the basic idea and the structure of today’s Internet reflect European values ​​such as decentralization and individualism?
In a way yes. And there is much more to it than technical questions – namely whether you are controlled or free. The Internet is currently organized in a decentralized manner and cannot be controlled. That’s exactly what we need. As Europeans, we are used to dealing with paradoxes and dilemmas and compensating for them. On the one hand, we love to be in a certain place. We love the identity that results from being German or Danish. At the same time, we feel that we are also residents of this planet and have a shared responsibility for climate change. The way the Internet is organized fits these different identities.

Do you actually use the Chinese app Tiktok?
No. But that’s probably more a question of age.

Byte-Dance, the company behind Tiktok, As a video platform not only competes with YouTube, but also wants to dominate the global AI market with its technology. Are you worried?
This actually marks a change in Chinese strategy. For centuries, the country wanted to enforce its will primarily on its territory. There were no real international ambitions. But we should let the Chinese be, they can do that much better. We are Europeans. We have a common history, sometimes a very bloody one. But we also have common values ​​that have emerged from this story. We can be much more confident that we have something to contribute. We can be the best in a range of technologies when we do things together, pool resources, attract talent when the market and Member States work together.

Let’s talk about the corona crisis. Google and Apple have defined the technical framework of the tracing app. Why is it not possible to find your own solution in Europe?
Perhaps we will still find these solutions in the future. But I don’t see any problem in working with the manufacturers of our smartphones. Of course, their operating systems must also allow apps from other developers, we are currently negotiating the technical details. Technology with transparency is crucial. Citizens can rest assured that the app doesn’t do more than it is allowed to do. We don’t want to be involved in the creation of a surveillance company.

However, Google and Apple have determined that there should only be one app per country. Will American Private Companies Take Over the Decision-Making Process of European Governments?
I’m not sure if that’s the whole story. The health authorities of the different Member States have to work with private providers in each country so that we can guarantee citizens safe use of the app. In this case, it’s not about the phone providers, it’s about building trust between member states so that we can do it at national level while allowing the various apps to work together.

There was also a concept called “Pan-European Privacy-Preserving Proximity Tracing”, or Pepp-PT for short. Is there still a chance to advance this technology as a European solution?
First of all, there is broad consensus that this should be a decentralized solution. This means: the data is on your smartphone and does not have to migrate to an external server. Secondly, we agree that no location data is transmitted to prevent abuse. In addition, people’s trust is greater when their own country is behind it. This leads to higher downloads and usage figures.

“An opinion belongs only to you, facts belong to everyone”

The European Commission has launched a public consultation on the proposed Digital Services Act. What is the European stance on the responsibility of technology companies to regulate extreme content on their platforms?
A lot has changed in the past 20 years. At that time it was not foreseeable that we would be so dependent on these gatekeepers of the Internet. That is why we urgently need to adjust the regulation. Posts that would be illegal in the real world must never be accepted online. We are now making a public consultation on the following idea: If someone interferes with your online contribution, you must defend the contribution and argue for its whereabouts. But the most important thing is that anyone who offers digital services within the European Union should be registered here in addition to their country of origin so that the authorities can enforce the law. Otherwise we do not have a single market for digital services.

With this in mind, was it a helpful Twitter decision to add a fact-check label to the president’s tweets?
Yes. We are also working to verify facts. An opinion belongs only to you, facts belong to everyone. However, neither the European Commission nor their country nor the platforms should be responsible for their control, but third-party providers.

Keyword climate change. Shouldn’t every rescue measure for companies in the course of the corona crisis be tied to sustainability criteria?
We can do that if we spend the money together. That is why we are committed to a long-term budget, which includes a reconstruction fund immediately in the first year. Then we would have democratic control by the European Parliament, but at the same time we could keep our promises and make optimal use of digital technology and combat climate change. We are talking about a total of 750 billion euros for the recovery, and there is also a lot of money in the long-term household. If companies want these funds, they should become greener and more digital.

Historically, the German government has always been opposed to closer fiscal ties in Europe and an advocate of EU-wide debt reduction. Germany is now pouring money into its troubled economy and allowing government subsidies. What do you say about this contradiction?
When the situation was worst during the lockdown, the first priority was to keep business going without making any further demands. It is extremely important for all of us that Germany provides adequate liquidity. To a certain extent, it can serve as a locomotive for the whole EU. It is regrettable that not every state has this financial scope. So there are big differences within Europe. That is why we need the reconstruction program to help the European economy recover. We also want to prevent the internal market from fragmenting. If national economies emerge from the crisis at very different speeds, this will delay the overall economic recovery.

They knit in sessions to relax from the ubiquitous digital availability. Why exactly that?
I work a lot with words. That’s why it’s nice to make something in between. That’s why I cook and bake too. I’ve been to millions of meetings where people suddenly switch off and hang on cell phones. I find that pretty rude. When I knit, I keep my hands busy and stay focused – of course, only if I don’t lead the session.

Thank you for the interview!

The interview was held as part of the kickoff for the Ada Fellowship 2020, which was attended by Margrethe Vestager. Assistance: Daniel Rettig.

More: The EU subsidy rules are correct – but must not overshoot the target