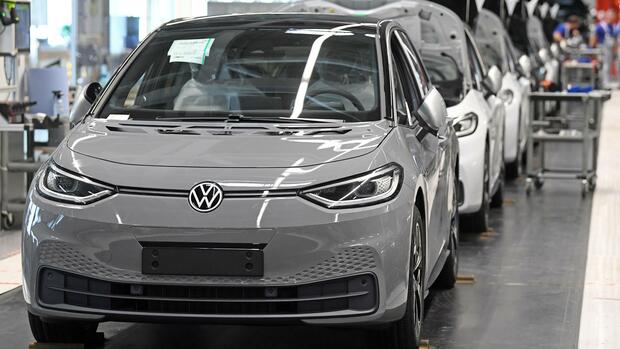 Dusseldorf A serious software error only occurred at Volkswagen in May. Because the automatic emergency call system in the new Golf was not working properly, the Wolfsburg-based company had to stop delivering its most important model for several weeks.

Established car manufacturers struggle to get the steadily increasing software component in their vehicles to work. Volkswagen is also making only gradual progress. Now the Wolfsburg-based company is preparing a permanent cut, with which the company is also to become a powerful provider of vehicle software. The new “Car.Software.Org” will start operating on July 1, the group announced on Friday.

The preparatory work of the new Volkswagen subsidiary took a good six months. From the construction phase, the automaker’s software unit should switch to work mode. The “Car.Software.Org” should not only help to prevent annoying errors like the Golf 8 and the ID.3. Rather, it is about building a fundamentally new software strategy in the Volkswagen Group.

So far, the development of proprietary software at Volkswagen has only made up a small proportion. According to its own statements, the Wolfsburg-based group only has a software share of around ten percent. Most of the software comes from automotive suppliers such as Continental, Bosch or the Korean LG group. The job of a car manufacturer is then to coordinate these various software components in a vehicle and get them running.

With the “Car.Software.Org”, Volkswagen wants to create the conditions for the Group’s own software share to increase to more than 60 percent by 2025. VW would thereby bundle essential parts of the software competence in-house. “Volkswagen wants to retain sovereignty over the entire vehicle architecture, which includes the electronics,” said Christian Senger, the future CEO of the new Volkswagen subsidiary.

Reduce dependence on US tech companies

The company’s own new unit should also ensure that Volkswagen does not become completely dependent on large American IT companies such as Google and Apple when it comes to computer and software issues. Computer programs will continue to grow in importance in every car over the next few years. VW CEO Herbert Diess therefore speaks repeatedly of the “smartphone on four wheels”.

If a car manufacturer does not develop the vehicle-related software itself, there is a risk of being technologically out of touch. A vehicle manufacturer could thus become a pure supplier of a sheet metal body, the finishing with higher added value and software would come from an IT giant.

Volkswagen is the largest car manufacturer in the world, which is why the Wolfsburg-based company also thinks big when it comes to “Car.Software.Org”. By the end of the year, around 5000 employees worldwide are to be combined in the new subsidiary. This will primarily be developers who have previously worked with car software at the VW, Audi and Porsche brands. By 2025, more than 10,000 experts are expected to work for Volkswagen’s IT subsidiary. The Group wants to achieve this number primarily through new hires.

The central task of the “Car.Software.Org” is the development of its own operating system for all cars from the Volkswagen Group, already called “VW.OS” internally. The name is based on operating systems from the IT world, “iOS” from Apple is the best known example. The VW software is intended to control all services in the car, from driver assistance systems to highly automated driving and parking, charging technology to systems for mobility services and digital business models of the individual group brands.

The new Volkswagen unit has a good three billion euros available to develop this in-house operating system. The development work on the “VW.OS” should be completed in 2024. One year later, the operating system will then be used in every newly produced vehicle from the group.

Volkswagen produces more than ten million vehicles every year. Once the new operating system is developed, it could be used millions of times in VW, Audi, Porsche or Skoda models – and keep the cost per car extremely low. “Software develops its potential with the increasing number of vehicles,” emphasizes Christian Senger, “that applies to cost advantages, but also to learning from data. We have this scaling advantage on our side. ”

It is not entirely out of the question that Volkswagen will one day offer its finished operating system to other car manufacturers. “We are driving our software platform forward ourselves. If there are new opportunities along the way, we are definitely interested and open, ”adds Senger. Rumor has it that Volkswagen has had talks with Daimler and the supplier Continental about this, but it has not led to any results.

The “Car.Software.Org” will have its operational headquarters in Ingolstadt. This underscores the connection to the premium subsidiary Audi, which should again play a leading role in research and development topics within the Volkswagen Group. “Car.Software.Org” is only a preliminary name. Volkswagen is still considering a more catchy name.

The independence of the new unit should also be guaranteed through the legal form. According to corporate circles, the new software subsidiary will in future be managed as a “European company” (Societas Europaea, SE for short). This ensures greater flexibility because the subsidiary will be active internationally with branches in other countries. The rights of participation – important for the works council at Volkswagen – are also preserved.

In general, there is optimism in industry circles that Volkswagen can catch up with the software advantage of competitors such as Tesla. “I would assume that Volkswagen will take between three and five years to become a car manufacturer with sufficient software expertise,” says Stefan Bratzel, professor at the Center of Automotive Management (CAM) at the Bergisch Gladbach University of Applied Sciences.

The entire company Volkswagen must learn the topic of software anew. At the competitor Tesla, the cars would be developed and designed entirely around the software. “So there has to be a new product development process like this at Volkswagen,” adds Bratzel.

More: Attack on Tesla and Google: Daimler, VW and BMW develop their own operating systems