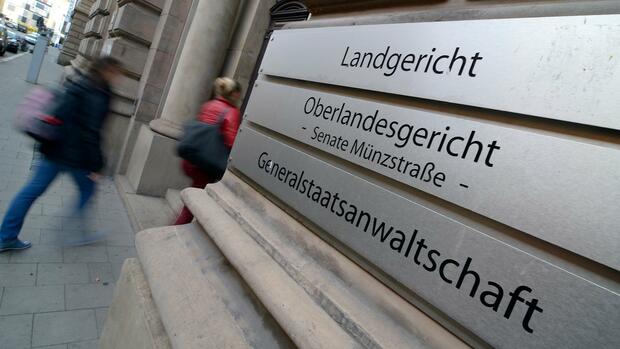 Dusseldorf German courtrooms have been a tough place for Volkswagen lawyers in recent years. More and more customers complained in the diesel scandal for damages because the engines of the Wolfsburg-based carmaker emitted more emissions than advertised on the road.

The judges found sharp words for this: “deliberate deception”, “scheduled concealment”, “malicious concealment” and “intentionally immoral harm” were just a few of the expressions with which they described the dealings between the Volkswagen Group and its customers.

It sounded different at a place in Germany. The diesel scandal, it was said in this legal Volkswagen oasis, was actually not a scandal at all. Although Volkswagen already had to buy billions of claims for damages in the United States. Although managers are already detained there for fraud. Although German public prosecutors have now finished writing their indictments against those responsible for VW.

The judges at the district court and at the Higher Regional Court in Braunschweig could not see any damage. So it is logical that there was no claim for damages. Both courts are located in Braunschweig, around 40 kilometers from Wolfsburg, Volkswagen’s global headquarters. The car company is the largest employer, the largest taxpayer. When Volkswagen coughs, people say, Lower Saxony has the flu.

The Federal Court of Justice is 440 kilometers away in Karlsruhe. For almost a year, the highest German civil court dealt with a revision of the VW group in the largest German industrial scandal. The Wolfsburg did not want to accept a slag before the Koblenz Higher Regional Court. On May 25, 2020, the judges made the defeat final – thereby confirming what many customers had long known: Volkswagen had sold them damaged cars. You have a right to compensation.

In judging the judgment, the Karlsruhe judges do not give Volkswagen good hair. The behavior of the car maker was immoral. The defendant “systematically and for years exploited the innocence of the customers purely for profit and took advantage of consumer confidence in the approval process to be carried out at the Federal Motor Transport Authority”. The individual’s efforts to protect the environment were undermined by deliberate deception.

The Federal Court of Justice wiped Volkswagen’s argument that the manipulation was the work of individual engineers. Volkswagen had sold eleven million vehicles with manipulative diesel software – this number alone shows the particular reprehensibility of the behavior. The group had to accept the intentional actions of its employees and the knowledge of the then head of their development department and the then board.

Volkswagen was used to such words, if not from a supreme court. The fact that the BGH judges spoke out so clearly for compensation therefore hits two other addresses in Lower Saxony much harder: the judges at the regional court and the higher regional court in Braunschweig stand there like law students who have rattled through their exams.

According to research by the Handelsblatt, around 8,000 lawsuits have been filed in the Braunschweig Regional Court in recent years alone. The result in the words of a court spokesman: “The buyer lawsuits against Volkswagen have so far been almost unsuccessful.”

In judging the judgment, the Karlsruhe judges do not give Volkswagen good hair.

After the decision of the Federal Court of Justice, at least in one of the two competent Braunschweig chambers, the realization has matured that this cannot remain the case. “The presiding judge of the 11th civil chamber, which has been entrusted with VW buyer lawsuits, has announced that he will change his previous case law and follow the case law of the BGH,” said the spokesman for the regional court. There is still no signal from the other responsible chamber. Even VW managers, of course, can hardly expect that the 3600 lawsuits still pending at the district court will fail for each Volkswagen.

The Braunschweig Higher Regional Court pronounced 18 judgments in appeal proceedings against Volkswagen. All car buyer appeals were rejected. Nothing has happened since the judgment of the Federal Court of Justice – also due to the corona crisis.

According to information from the court, of the original 2550 cases, 1216 are still pending. A spokeswoman for the court said that it is not clear how it will go on, that this can be answered abstractly and in advance. However, the 7th Civil Senate of the Braunschweig Higher Regional Court would take the BGH ruling from Karlsruhe into account.

Exceptional justice as a fundamental problem

Anything else would be a legal affront. “Judges are objectively independent and are not bound by the legal opinion of the BGH. The instance courts do not have to follow the BGH in this case either. However, the legal situation in the VW case was so clear from the start that anything other than a U-turn in Braunschweig would simply no longer be understandable, ”says Michael Heese, law professor at the University of Regensburg.

Heese sees a fundamental problem in the Braunschweig case law. “The model declaratory action showed particularly clearly that a place of jurisdiction near the group is not suitable for negotiating such cases,” said Heese. “The public had to get the impression that the Braunschweig courts as a whole did not deal with Volkswagen impartially. This bad appearance alone is enough and damages the reputation of the rule of law. “

Evil is exacerbated because the country is one of the automaker’s largest shareholders. It holds 20 percent of the voting rights in Volkswagen, with Prime Minister Stephan Weil (SPD) and Economics Minister Bernd Althusmann (CDU) two high-ranking government representatives on the VW Supervisory Board.

As faithful to Lower Saxony’s politics and judiciary Volkwagen have been to the side – in the Wolfsburg management it seems to have now been recognized that the legal battle against customers has largely been lost. Volkswagen already gave up its defensive stance in comparison with the Federal Association of Consumer Centers, which conducted a model procedure.

More than 200,000 customers who had joined the model lawsuit received a total of 830 million euros in damages. Depending on the model year and vehicle type, Volkswagen paid between 1,350 and 6,250 euros per case.

The settlement of the pending individual lawsuits in the diesel scandal is likely to be expensive again.

The carmaker is slowly clearing the field even in the pending legal proceedings. “From our point of view, the Federal Court of Justice has made clarity clear for around 50,000 pending cases,” says a Volkswagen spokesman. According to its own statements, the group has started to withdraw appointments in the corresponding proceedings. In addition, they now “approach individual lawyers to prepare discussions about the framework of comparisons”. One-time payments should be offered to customers as a “pragmatic and simple solution”.

Volkswagen wants to draw a line

Behind the scenes, it is said that the process will be completely ended by the end of 2020. According to Volkswagen, the amount of the compensation will depend on the individual case. Components that play a role in the calculation of the sum include the vehicle type, the age of the car and the number of kilometers driven. The fact that the customer wants to continue using the vehicle should also play a role.

The group did not disclose the total amount Volkswagen is planning for the payments on request. However, based on the compensation payments that were agreed in comparison with the consumer advocates, the total would amount to around 175 million euros.

The settlement of the pending individual lawsuits is unlikely to be cheaper than the mass comparison. The group also assumes a clear three-digit million sum.