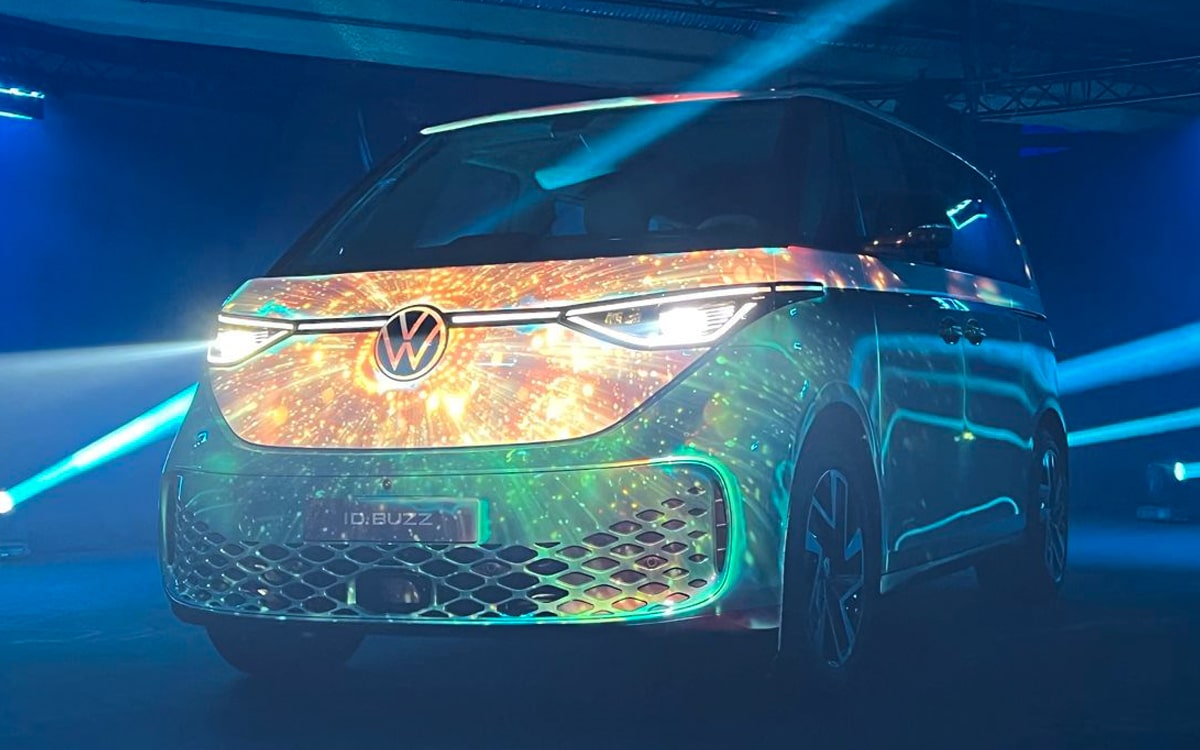 Seventy-two years almost to the day after the launch of the first Combi, on March 8, 1950, Volkswagen has finally unveiled the one who will have the difficult task of carrying the spirit of vanlife on the roads in the era of the electric car. : the ID.Buzz.

This launch also comes 21 years after the presentation of the first New Microbus concept, in 2001, at the Detroit Motor Show. But if at the time it was a question of using the platform of the Combi of then, the T5, it is today on the electric platform MEB of the German group that the ID.Buzz is based.

Even without the imposing VW logo in the center of its grille, we would certainly identify the ID.Buzz as the descendant of the Combi line. In fact, it is even stylistically much closer to the T1 than is the current T6, or its predecessor T5. If it is not easy to modernize an iconic design (for once, this term is not hackneyed), the team of the style of VW succeeded brilliantly.
Admittedly, the ID.Buzz has adapted to the times and has become overweight in its length (4.72 meters against 4.46 m for the T1), but everything else has been respected. 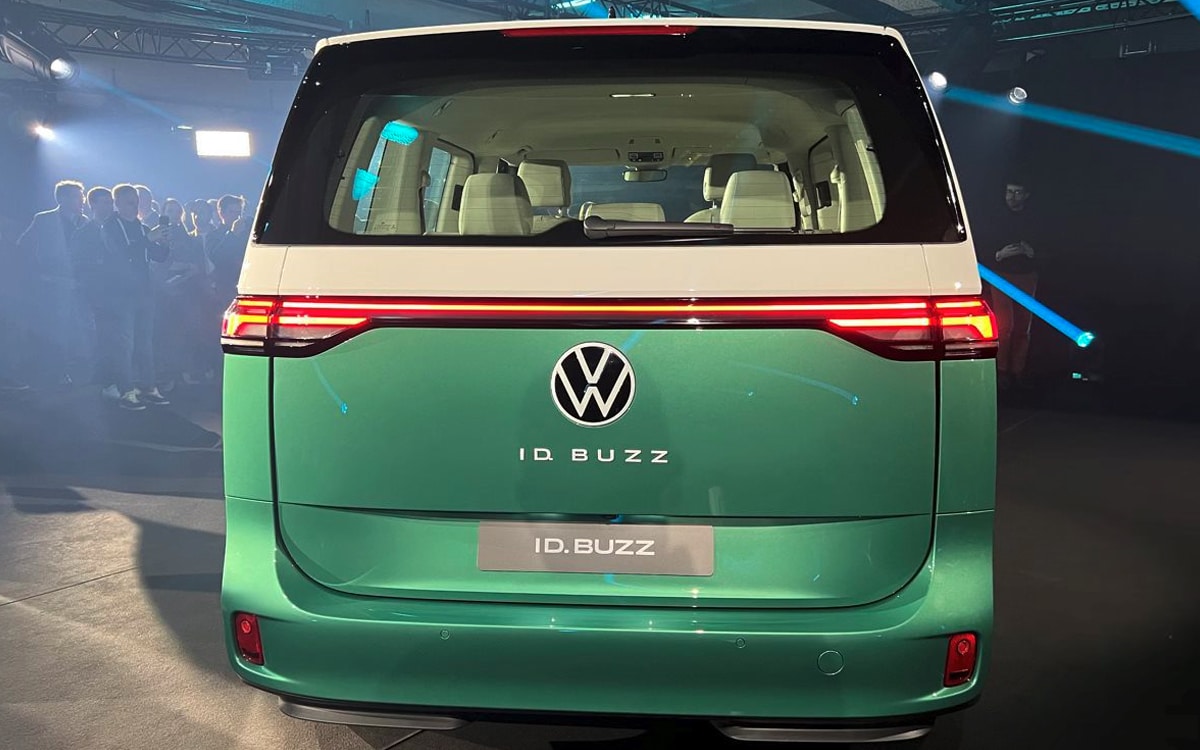 The proportions, the reduced overhangs and the glazed surfaces are largely inspired by the original design. On the sides of the “civilian” version, for example, four windows are extended by aerators, exactly as on the T1. Shorter than a T6, it will be easier to melt into city traffic (its turning circle of 11 meters is close to that of a Golf), although its height (1.94 m) will deprive it of access to most underground car parks. 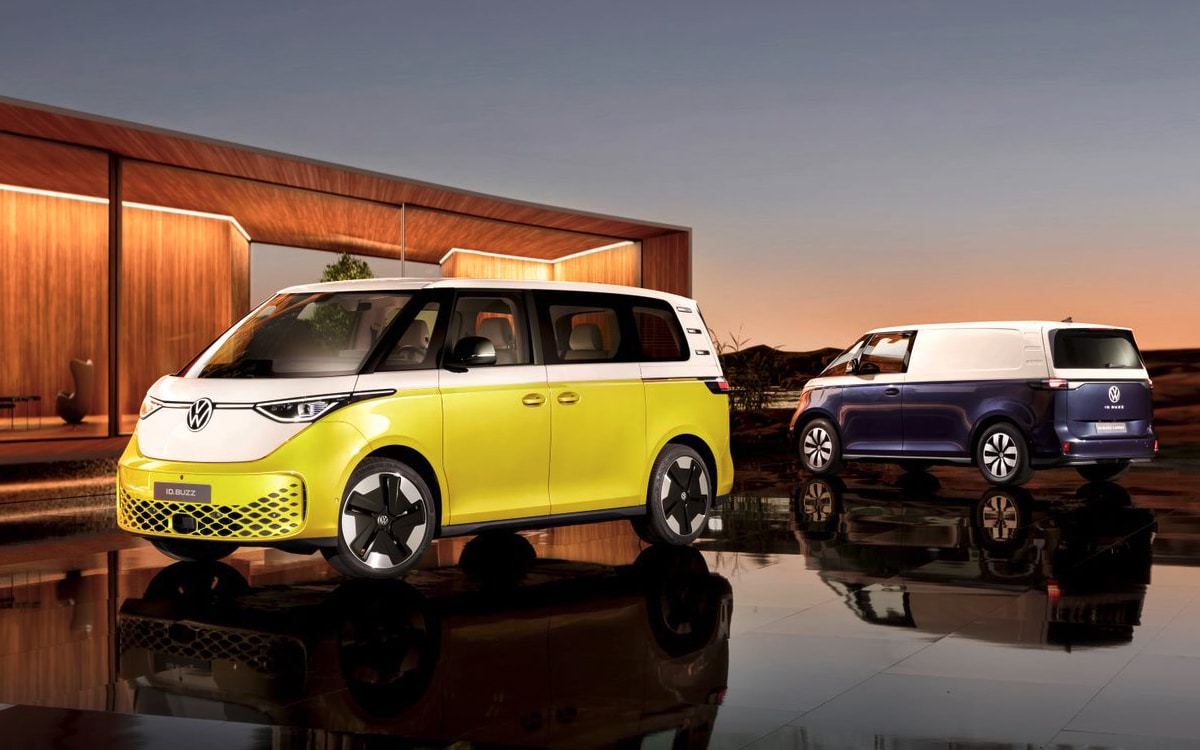 In terms of lighting, on the other hand, the ID.Buzz is closer to VW’s passenger car ranges than the Multivan, with LED strips that cross the width of the vehicle both at the front and at the rear. ‘back. Clearly, LEDs replace chrome!

Interior atmosphere: between ID and Multivan

In the passenger compartment, the inspiration with the first of the line is on the other hand less pregnant, but the spirit remains however. If at the time the stripping was in order, we are not really in opulence here either. The dashboard, quite similar to those of the ID.3 and ID.4, is stripped of the superfluous. By rewinding the film, we even think that this drawing, with a mini screen behind the steering wheel, was perhaps first imagined for the ID.Buzz before being recovered in the ID.3 and ID.4 , as it evokes the small round counter of the T1. A readaptation, in a way, of the “less is more” architectural concept born at the end of the 1940s and regularly brought up to date, as with the adoption of the flat design of which the VW logo was precisely the object here two years. 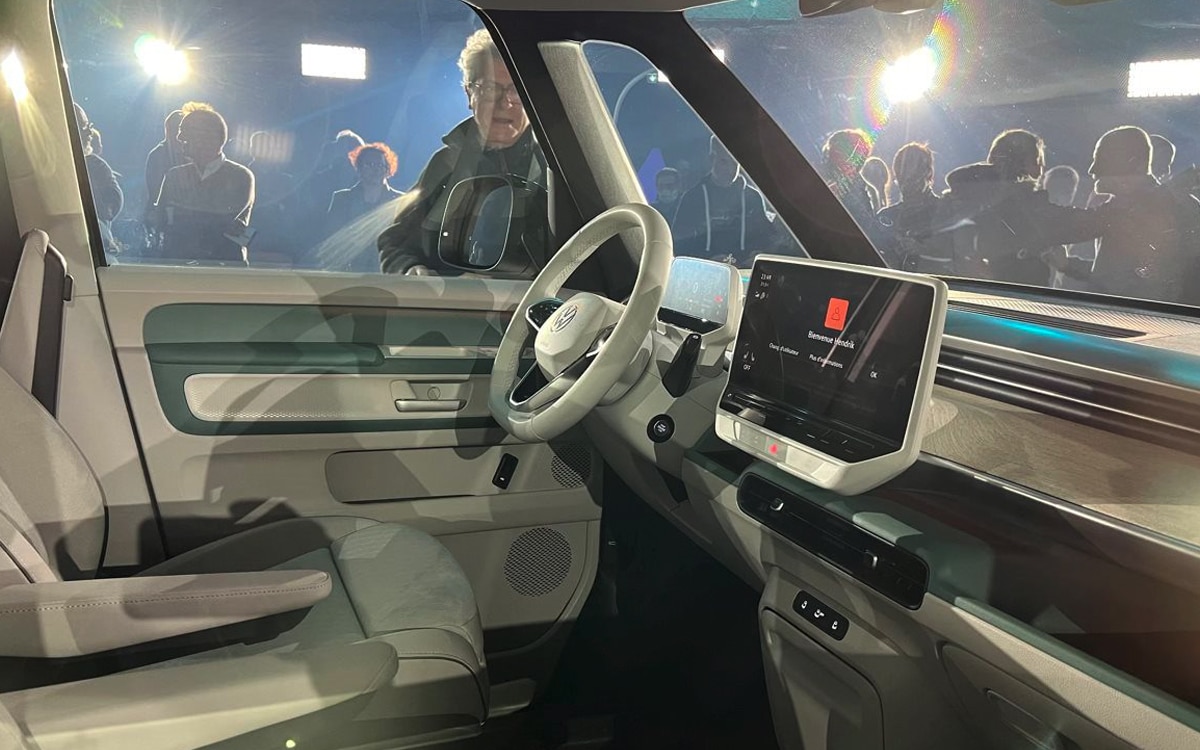 In the layout of the cabin, on the other hand, VW has not sought to reinvent the simple. The ID.Buzz, in its passenger car version, will be available in 5 or 7-seater versions. Thanks to the use of the MEB platform, space on board is largely preserved compared to a Multivan T6 since the ID.Buzz has the same wheelbase while it is almost 20 centimeters shorter in length. Still, with 7 passengers on board, the volume available for luggage will be drastically reduced. In the 5-seater configuration, on the other hand, a large volume (up to 1,121 litres) of loading will remain available to load enough to hold a small seat, or more certainly a few weeks at the campsite. Loading is facilitated by a fairly low threshold and a motorized tailgate. As for access to the rear seats, it is via two sliding doors offered as standard. 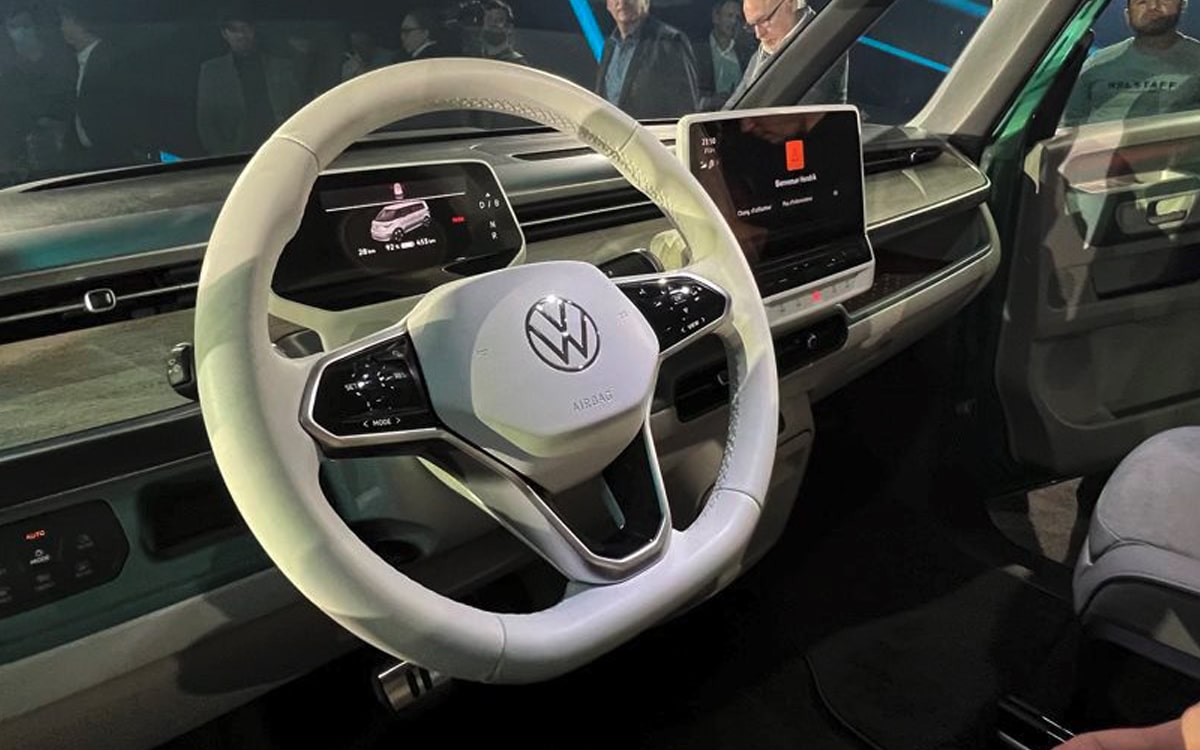 In terms of materials, like most electric vehicle manufacturers, VW relies on the lightness of synthetics which has the good taste of being made from recycled products. Exit leather, velvet and other noble materials, here we use fabrics 100% made from plastic bottles and waste recovered from the sea. Obviously, the atmosphere is affected. To the touch, most surfaces are hard. In the front seats, for example, only the armrests of the storm doors and the bottom of the storage compartment facing the passenger offer a minimum of softness.

As standard, the ID.Buzz has a 77 kWh propulsion battery, apparently identical to that found in the high-end ID.4s. The brand indicates that it wanted to facilitate the whole recharging aspect and offers various solutions in this sense. First of all, all ID.Buzz will have bidirectional technology that allows the car to receive electricity for recharging, but also to be used by running a home or another vehicle. In the first case, a specific DC BiDi wall box will be offered to the customer. For everyday charging, VW says its Plug & Charge device will in future make it possible to do without the cumbersome wallet of cards that many EV users are sometimes forced to have to be sure of being able to “refuel”. in any circumstance. 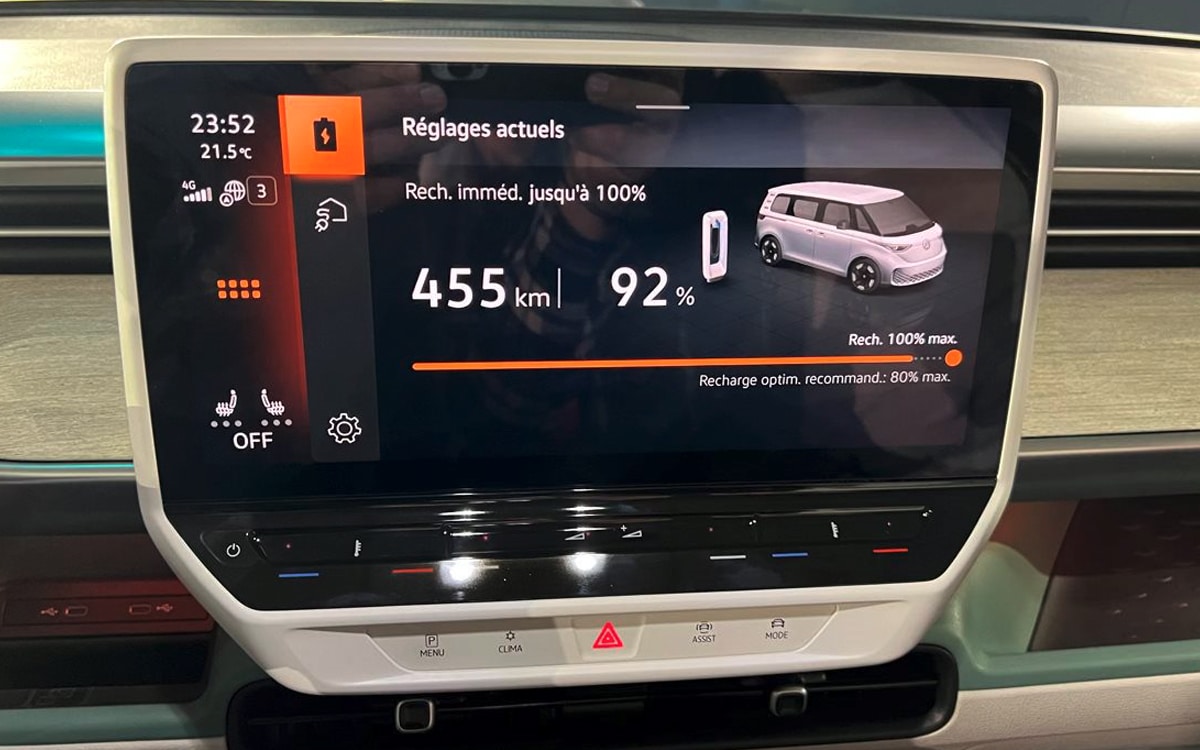 Admittedly, this will require distribution networks to adopt this protocol, but the obvious would be that everyone is moving towards solutions that make life easier for users. After all, Volkswagen was the first manufacturer in the world to use the CCS format which has since been standardized, why not succeed again in imposing an identification and invoicing standard (based on the ISO 15118 standard).

When we aim to sell 1 million electric vehicles per year in Europe within a few years, we have a voice that can carry this type of argument. VW has also indicated that Plug & Charge will soon be available on the Ionity, Aral, BP, Enel, EON, Iberdrola and Eviny networks.

In terms of on-board technologies, VW intends to offer the ID.Buzz an unreserved level of sophistication. The user interface is via the central 10 or 12 inch screen, which controls the “Ready 2 Discover” or “Discover Pro” system respectively. All systems are updated OTA as soon as a connection is available. 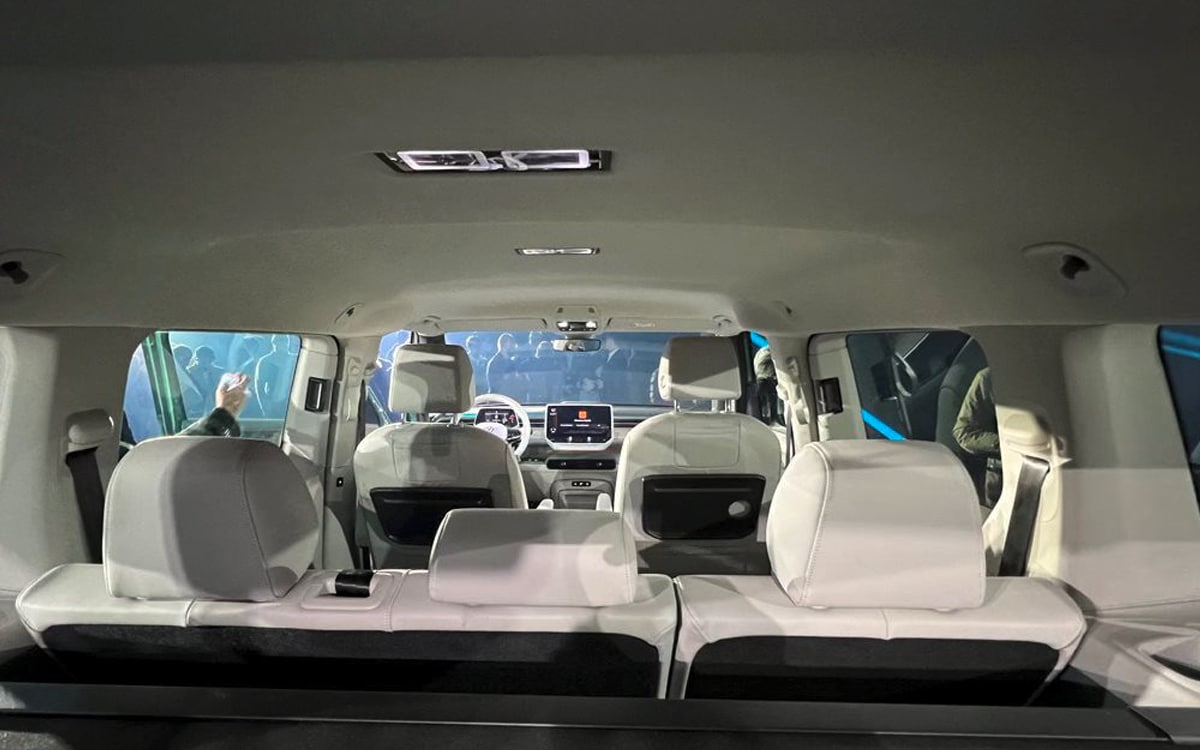 In traffic, the vehicle is equipped with Car2X technology and vehicle-to-vehicle communication independent of cellular networks. In this way, driver assistance technologies can warn the driver of a danger or any occasional disturbance. These technologies also make it possible to automate lane changes on expressways and facilitate guidance on unmarked roads. The brand does not hesitate to claim that the ID.Buzz has technologies that will allow it to adopt level 4 autonomous driving.

As mentioned above, the battery offered as standard in the ID.Buzz offers a useful capacity of 77 kWh (82 kWh gross). It is based on a 400 volt architecture which allows DC charging up to 170 kW, enough to go from 5 to 80% capacity in about thirty minutes in the best case. On the wallboxes or the network is charged secondary public alternating current, its on-board charger will accept up to 11 kW. 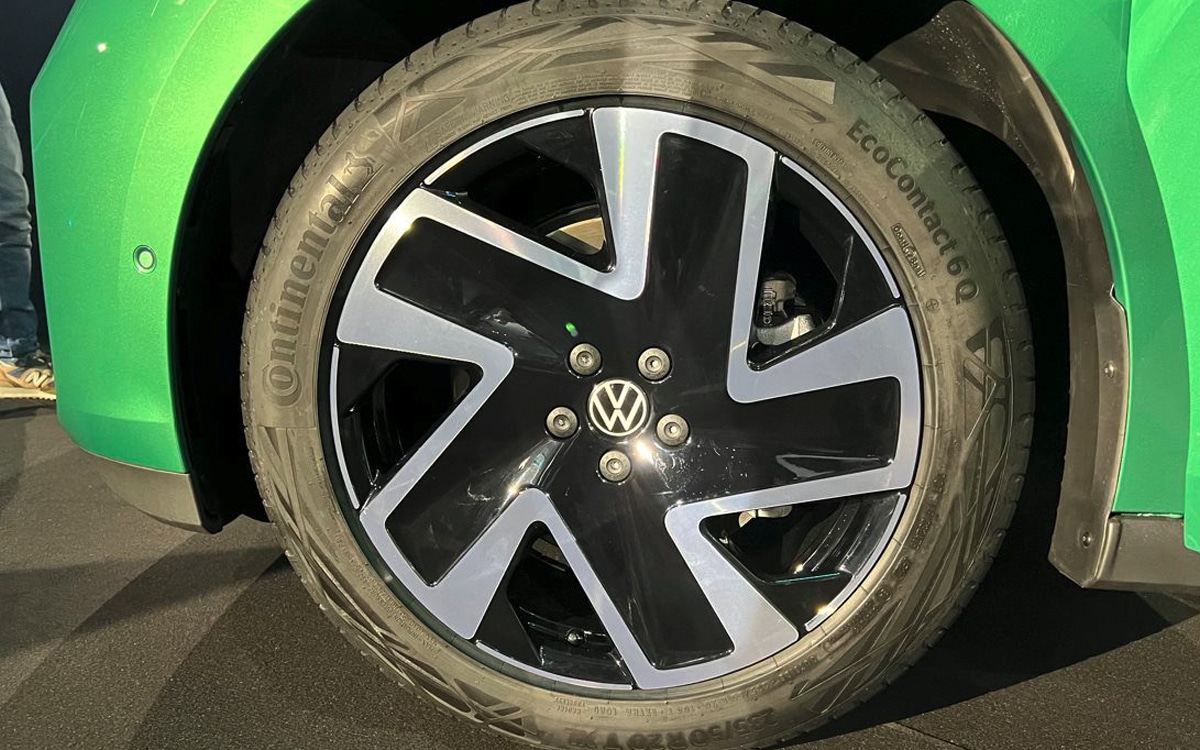 Like its cousins ​​ID.3 and ID.4 which are based on the same MEB platform, VW’s electric bus is a propulsion (like its venerable ancestor T1, by the way). The 150 kW (200 horsepower) and 310 Nm of torque motor will take the machine up to 145 km/h, this speed being electronically limited. 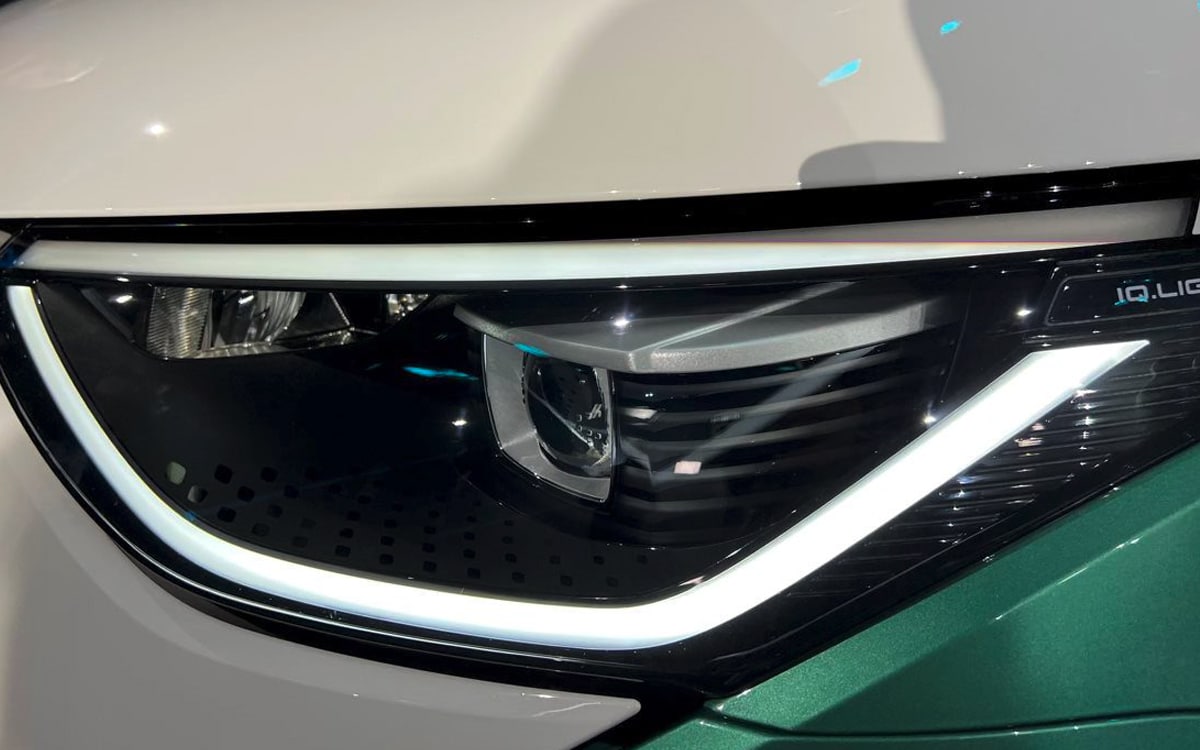 As for autonomy, the brand has not yet communicated standardized data. We were just able to consult the on-board computer of the model presented to us, which indicated 455 km with a little over 90% charge. We should therefore reasonably be able to count on 250 km of autonomy on the highway. 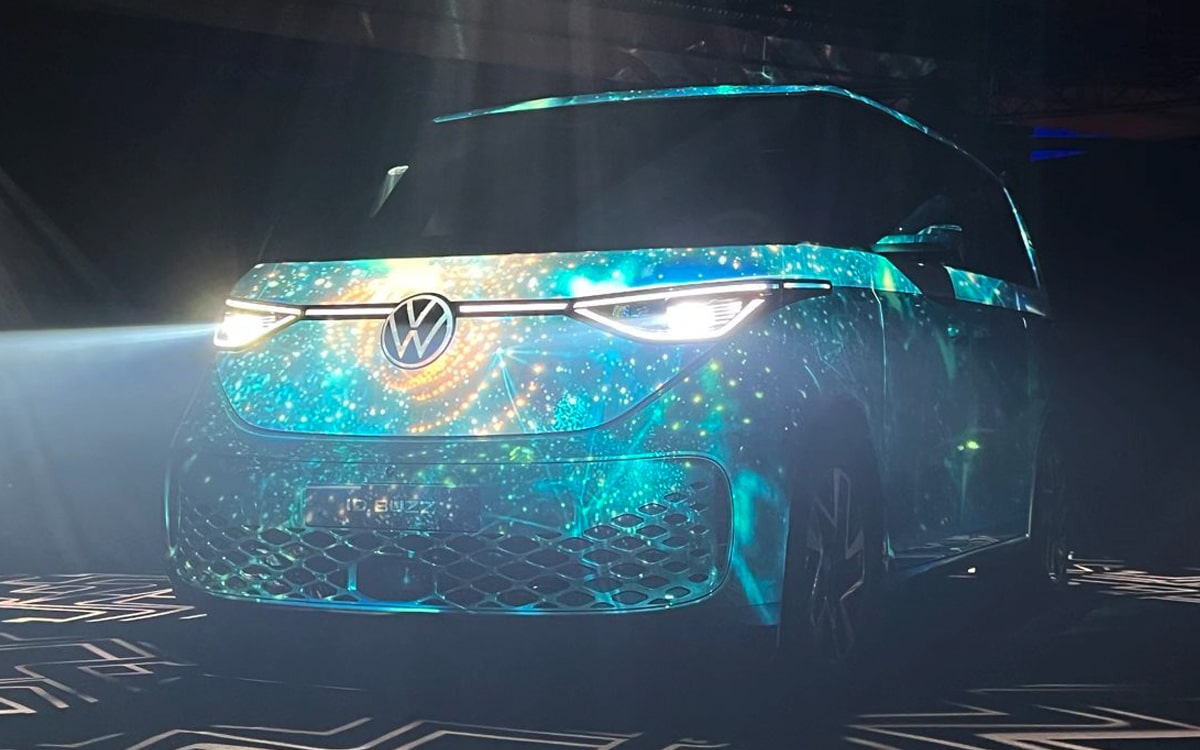 If the range and its prices will not be unveiled until May 2022, at the same time as pre-orders will be open, the ID.Buzz should be accessible around 50,000 euros for the first “passenger” versions, knowing that it will also be offered in utility version from the start of its marketing. The first deliveries will take place in the fall of 2022, if all goes well!