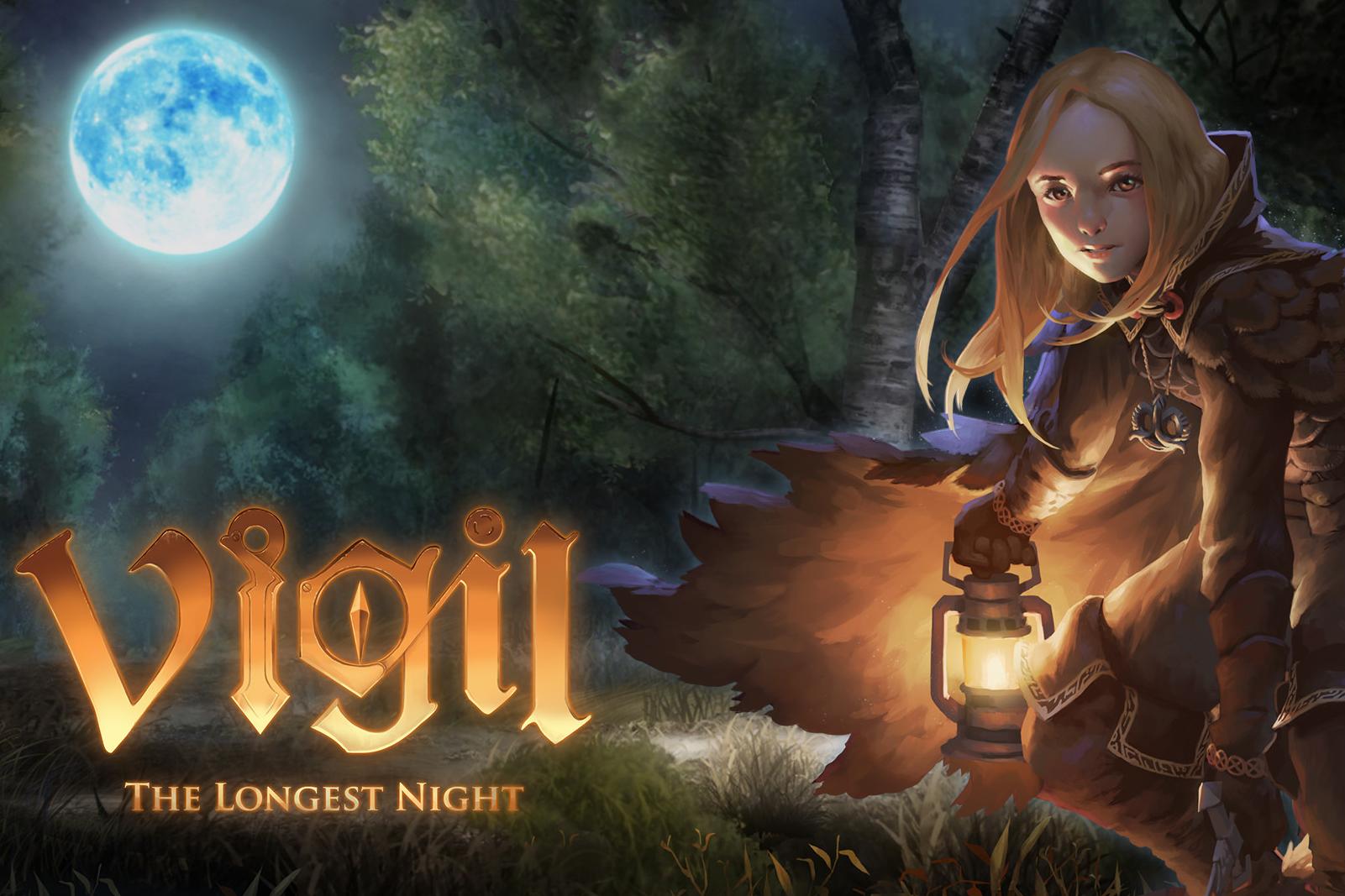 Certain games do not insist on reinventing the wheel and are content to be just an honest homage to the games that influenced them. And that’s fine. Designed by the hands of the small Taiwanese studio Glass Heart Games, Vigil: The Longest Night that’s exactly it: he doesn’t hide his influences on the Metroidvania and Soulsborne formulas nor does he endeavor to bring original ideas, but he fulfills the fundamental purpose of having fun.

As a big fan of both subgenres, I would like to register my outburst: the more games we have inspired by the two formulas, the better. I’m suspected of talking about anything that has Soulsborne traits and Castlevania, so Vigil already made a good impression on me early on. If you liked Hollow Knight, Salt and Sanctuary, Death’s Gambit and Blasphemous – just to mention a few names that came to mind now – know that Vigil has the potential to be your new godfather, even if he has wide-open defects. Check out our full review. 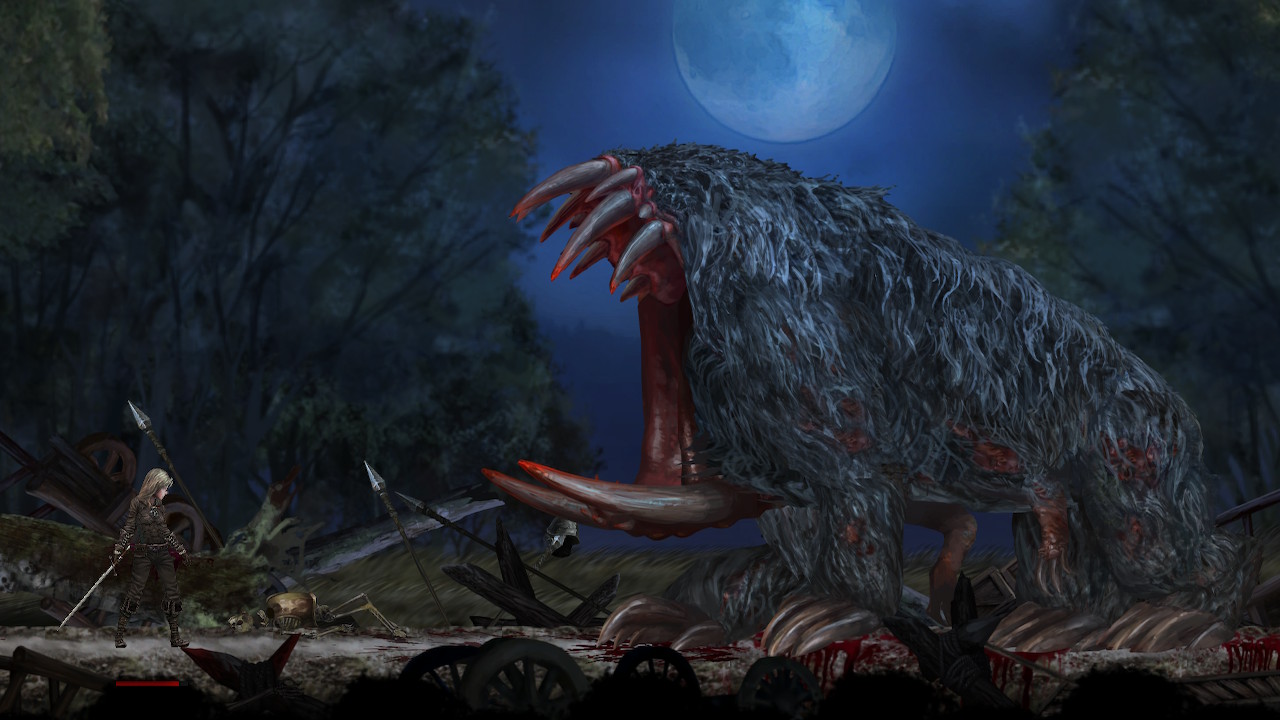 In Longest Night, the story embraces a darker and oppressive tone to develop the character Leila, a watchful young woman whose goal is to save her hometown from grotesque creatures and mysterious entities. Without going too deep into the details to avoid spoilers, the protagonist’s task becomes even more difficult when she realizes that her world is no longer the same as before.

With a light Lovecraftian spice à la Bloodborne and full of references to Taiwanese culture, Vigil presents the narrative density expected from games of the type, shown at a slow pace as the player explores its minutiae. Just like any souls-like, the world unfolds through item descriptions and enigmatic dialogues that are renewed with each new approach – rest assured, because the texts are in Brazilian Portuguese. The difference is that here there are many NPCs scattered around the map that not only detail the plot, but also play a crucial role in guiding the heroine to the next objective (although the paths are not always clear). 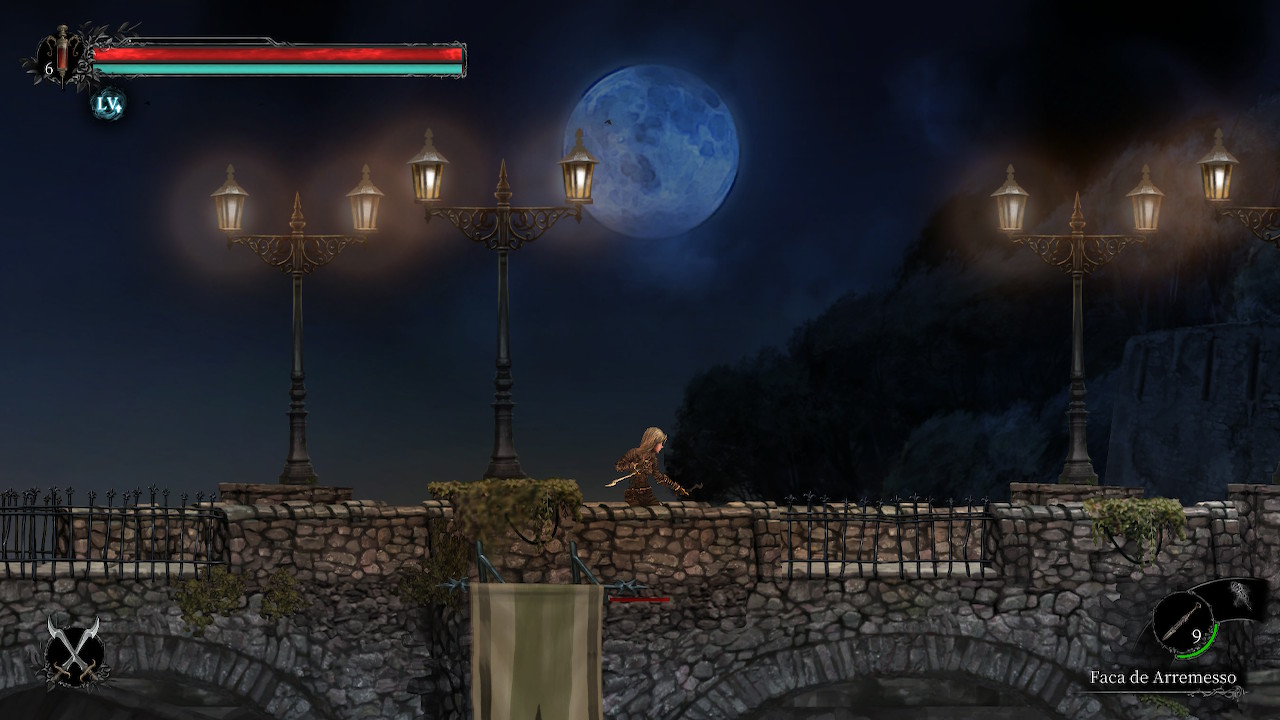 Exploration is one of the most important aspects of a Metroidvania, but in Vigil it doesn’t work that well. Whether due to the lack of orientation or the confusing representation of some sections on the map, the fact is that the high difficulty in this regard seems more a technical limitation and a bad level design decision than something intentional and designed to test the player’s perception.

Of course, part of the magic of this genre is to make you feel lost, disoriented enough to revisit all the regions already discovered in search of a passage that until then was not available. However, in Vigil you are not equipped with the resources to unravel the next step of the journey without first becoming frustrated. It is a geographically generous game, with an extensive area to be explored, however, hampered by a limited, almost non-existent, navigation system. 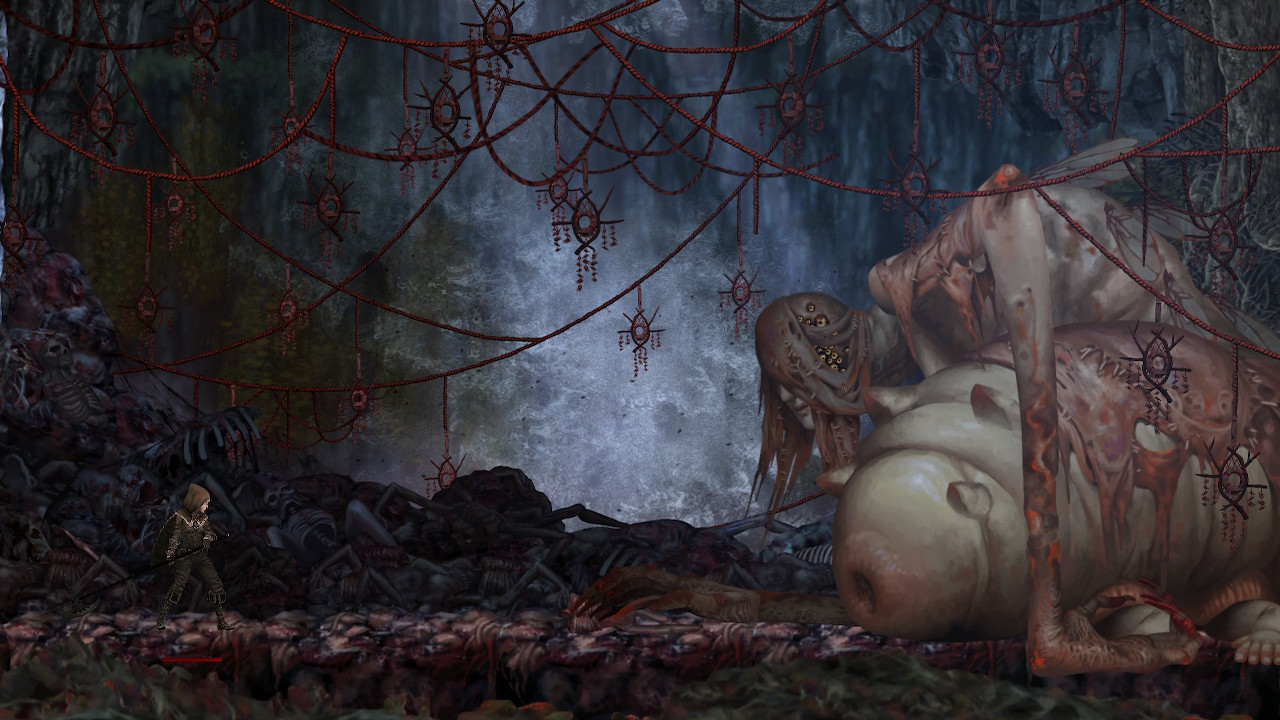 As much as the exploration is not equal to other recent games with the same proposal, Vigil: The Longest Night shows its full potential in a great combat system, capable of honoring the legacy of the genre to which it belongs. Battles have weight, they print the same compass Bloodstained: Ritual of the Night, with the interface of a Dark Souls, and require you to monitor enemy movements carefully before going on the attack. Its 2.5D aesthetic also has much of the work of Koji Igarashi.

The pace is up to you, the player, as it can vary depending on the weapon chosen. The scythe, for example, favors a slow cadence and does more damage, while the dagger guarantees weak attacks, only delivered extremely quickly. The variety of combat is Vigil’s greatest asset: there will always be a weapon good enough to suit your style of gameplay, you just need to discover it. 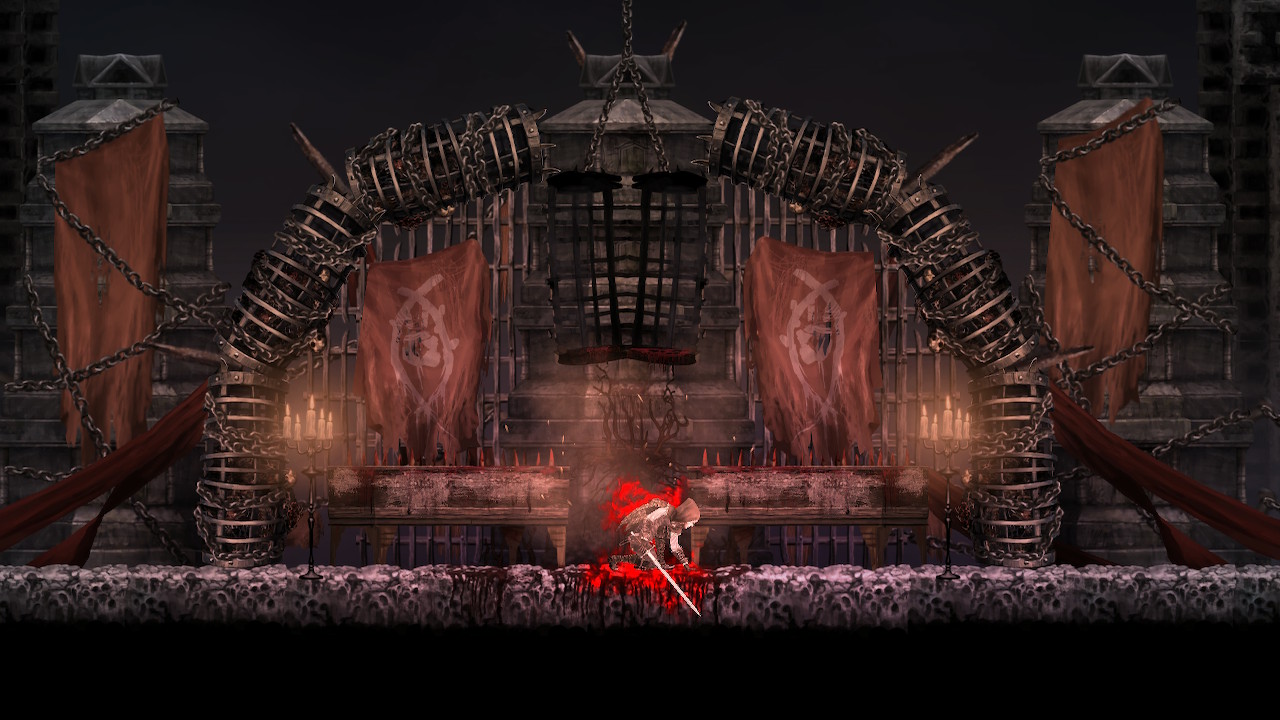 Leila, our protagonist, starts the journey with very basic movements. As it progresses, it unlocks advanced actions, such as the double jump, the possibility of grabbing onto edges and a strategic low, something like a prolonged dodge, very useful in battles against bosses. When unlocking new means of moving through the scenarios, the protagonist must return to areas visited, inaccessible at first, to continue the adventure.

In addition, there is an addictive level-based progression system where you can distribute skill points to enhance Leila’s flexibility. The character also uses the blacksmith to evolve equipment, which serves as an incentive to revisit already known regions in order to obtain the same materials over and over again. Farming, by the way, is a smart (and possible) option for those who want to get stronger. 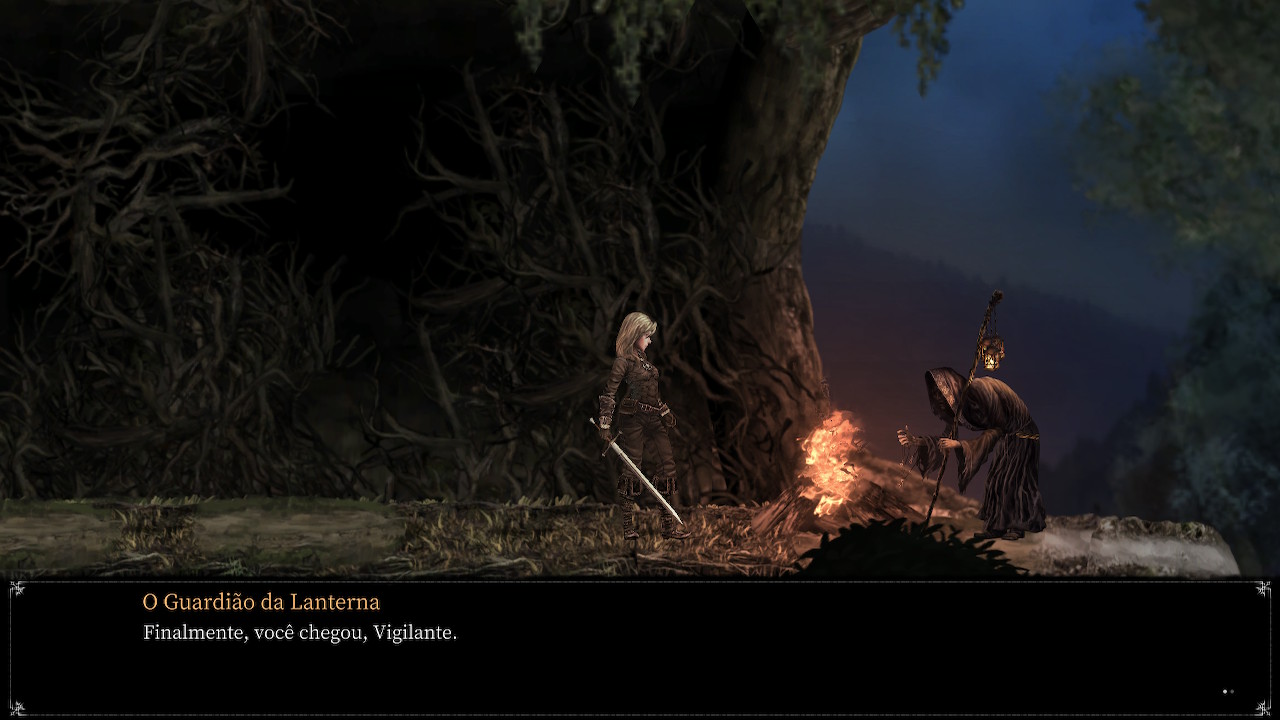 Another interesting aspect is that you can change the level of difficulty at any time, thus democratizing the experience for the player who is not so skilled or is not familiar with the formula. Making the game easy, for example, ensures that enemies – including bosses – are weak and vulnerable. On the other hand, the selector also allows to inject an extra dose of challenge to the most masochists. It is important to stress, however, that putting the game on the easy will not alleviate the problem that Vigil has in relation to navigation (read also exploration).

Voxel had access to the version of Vigil on Nintendo Switch, which proved to be a real disaster in terms of performance. The title was unable to remain stable, even for a few minutes, and showed sudden drops in fps, either in action or in the simple act of exploring the environments, without many elements on the screen. In addition, I was unfortunate to witness bugs and crashes that made me restart the app more than once, one of which I ended up losing a save with almost ten hours of gameplay.

Vigil: The Longest Night it is the union of two subgenres that have never been more popular than today. Combat, progression and atmosphere represent the main qualities of this Lovecraftian prose, despite the lack of original ideas. If you, like me, like to try any production that can put the words Metroidvania and Soulsborne in the same sentence, The Longest Night is more than a certain acquisition. However, there are caveats in the way the world was structured and, mainly, with regard to the technical part. Is it fun? Yes, it is – but it is good to be aware of your limitations before anything.

Vigil: The Longest Night was kindly awarded by Glass Heart Games to carry out this review