Valve introduced the Steam Deck. It is a portable machine capable of running all the games on the popular PC platform. It will launch in December from 419 euros and is clearly inspired by the Nintendo Switch when it comes to its format.

Nintendo has not announced its Switch Pro, so Valve has decided to present its own version. Unveiled without trumpets or fanfare, the Steam Deck is a terminal that furiously recalls the console of the Japanese manufacturer in its format. However, there is one big difference: it is neither a console nor a PC. It’s a mix of the two.

As you can see, the Steam Deck is a portable terminal with a screen built into a controller. We have an analog stick on each side, a directional cross on the left and four buttons on the right. On the upper edge, we have triggers. Very classic. The small peculiarity of the machine, it is to embed two touchpads with haptic feedback. A feature that seemed inherited from the Steam Controller, which had also made the choice of touch. Although more difficult to master, these surfaces provide more precision in strategy games or C-RPGs that are not conducive to controller gameplay.

Joy-Con point to detach here, unlike the Switch, since the Steam Deck is made in one block. However, it can be connected to an external USB Type-C display to enjoy a larger display. Two players can then compete against each other, the machine can also accommodate joysticks or sticks via its connections.

Steam, but on console

We remember the Valve Steam Machines released a few years ago, which were actually Windows PCs disguised as a game console. Valve seems to have learned from its mistakes because Gabe Newell’s company this time completely embraces the console philosophy with a dedicated OS. It’s about of a new version of Steam OS. You will of course be able to log into your account, find all your games, access the store and even retrieve your backups in the Cloud.

A new way to access the service, without any limitations. All Steam games will run on the console, even the very greedy AAAs. It’s the same platform, but in a portable machine. You can therefore start a game on Steam PC and continue it on Steam Deck. Note that the machine will offer a small novelty: the ability to put it to sleep in the middle of a game to resume later, like the Switch does.

Closer to a PS5 than a Switch

On the technical side, Valve has chosen to make concessions in order to achieve an acceptable retail price. The Steam Deck is equipped a 7-inch IPS LCD screen with a definition of 1280 x 800 pixels and a refresh rate of 60 Hz, a panel almost similar to that of the Switch. On the other hand, the hardware side is more promising with a custom APU designed with AMD capable of running big games. We have an AMD Zen 2 processor and RDNA 2 GPU, 16 GB of RAM as well as 64 GB eMMC storage or, as a choice, a 256 GB or 512 GB NVMe SSD depending on the model. A machine that is therefore closer to the PS5 and Xbox Series X than to the Switch. The big unknown lies in the autonomy, since Steam has been very vague on the subject, referring only to several hours of continuous play. 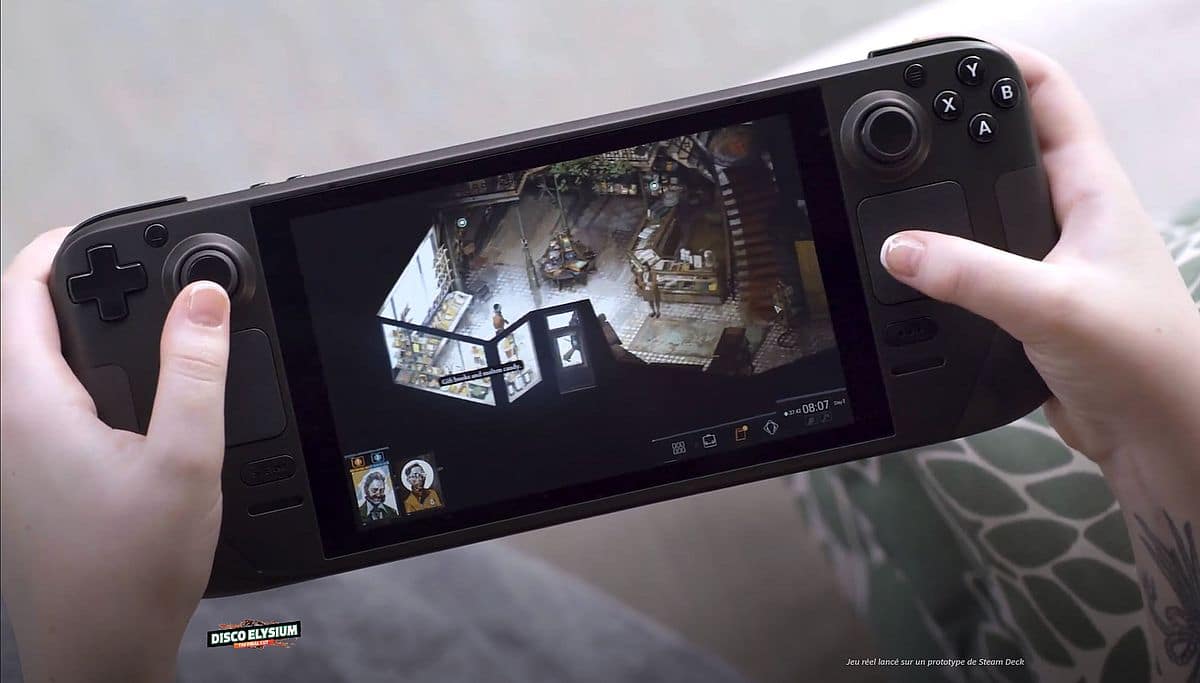 In short, a console that tries to reconcile two worlds, that of portable machines and the PC. It remains to be seen if Valve has learned from its mistakes and especially if it will be successful, which has not always been the case with the products of the Bellevue firm.

Finally, we share with you a video of IGN, the only media in the world to have been able to take the beast in hand: