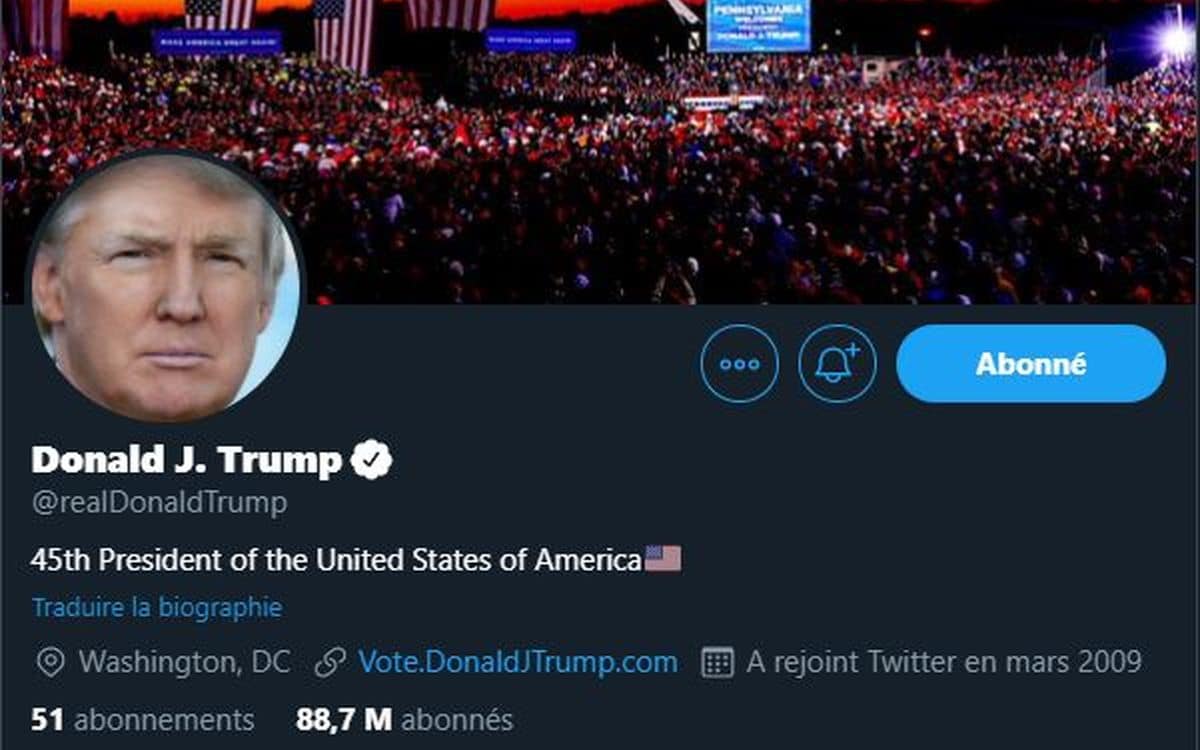 Twitter has decided to block Donald Trump’s account for twelve hours after two messages relating to the events on Capitol Hill. The social network threatens to shut it down permanently if the two tweets in question are not deleted. Facebook, Instagram and Youtube have also temporarily closed the account of the US president.

It is an unprecedented event that shakes the United States. On January 6, pro-Trump supporters stormed the Washington Capitol, interrupting the session of parliament that was to confirm Joe Biden’s presidential victory. Following the riots, Twitter, Facebook, Instagram and Youtube decided to take firm action against Donald Trump by suspending his account. Never seen.

As the mob ransacked the senators’ offices, Donald Trump continued to communicate on his favorite platform: Twitter. He called on the protesters to stay calm and avoid violence in a video also posted to Facebook, Snapchat, Instagram and Youtube. In the same video, however, he strongly asserts that the US election last November was stolen and prone to numerous frauds. Charges unfounded and already rejected by the US Supreme Court.

As a first step, Twitter first placed a warning message below the video, which said its claims are unreliable. Moments later, the network made the decision to block all retweets, likes and replies to the message, so as not to add to the climate of violence then raging in Washington. Eventually, Twitter deleted the video post, along with the previous one, and blocked the account of the US president. A first.

Donald Trump’s account is still accessible as of this writing, and it is possible to check his old tweets. However, we notice that the last two messages are missing, replaced by the mention “This Tweet is no longer available because it violated the Twitter Rules”. Moreover, the president of the United States can no longer tweet. He is thus deprived of his favorite means of communication.

This means that the account of @realDonaldTrump will be locked for 12 hours following the removal of these Tweets. If the Tweets are not removed, the account will remain locked.

Twitter hit hard and said it would go even further if necessary. If Donald Trump does not delete the two messages pointed out at the end of the twelve hours of his ban, his account will be permanently deleted for breaking network rules. The video was also posted to Facebook, Snapchat, Instagram, and Youtube, and then taken down for the same reasons. Facebook also suspended the American president’s account for twenty-four hours.

We’ve assessed two policy violations against President Trump’s Page which will result in a 24-hour feature block, meaning he will lose the ability to post on the platform during that time.

Donald Trump loves to communicate via Twitter. A mania that dates from long before his presidency. But in recent months, the social network puts pressure on the American president. Last May, during the demonstrations Black Lives Matters, the platform had for the first time reported one of its tweets which called for shooting the rioters. A great first. It seemed completely surreal then, but the situation has only escalated since.

Donald Trump has since lost the election to Joe Biden. Not accepting his defeat, he shouts fraud on the social network, forcing the latter to report his messages as false once in two. On January 20, Trump will once again become an American citizen like any other, and Twitter has already indicated that he will not hesitate to suspend his account if he breaks the charter.

The storming of protesters on Capitol Hill is an unprecedented event in US history that has caused a stir on the network. Emmanuel Macron also spoke about the situation in a video posted on Twitter. He denounced the violence of the demonstrators, evoking a direct attack on democracy.