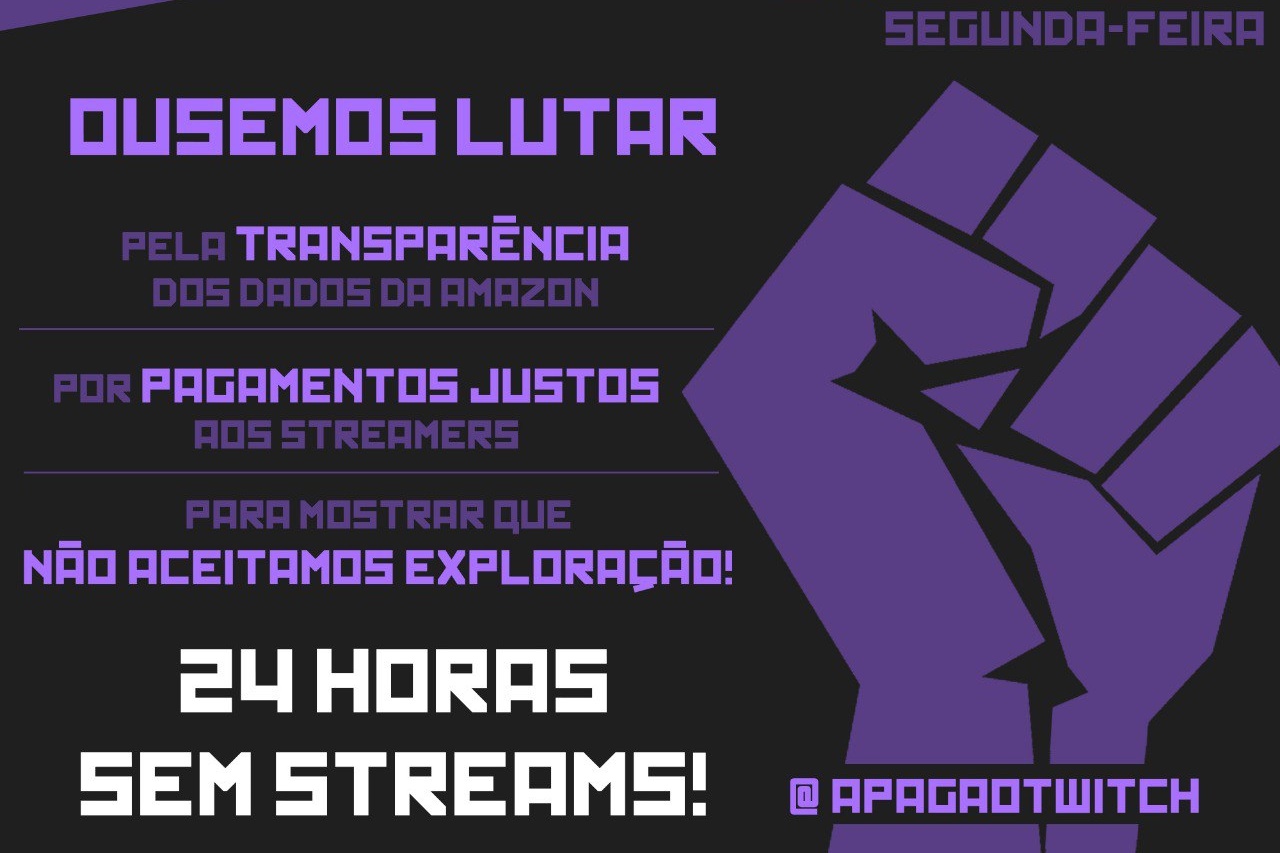 At the end of July, Twitch announced a 66% decrease in the value of subs calls to Brazilian channels that carry out lives on the platform. With the readjustment, the standard price on subscriptions dropped from R$22.99 to R$7.90. The measure had a bad impact on the streamers community, generating a kind of “union” and even a promise of strike.

The content producers’ complaint is that the decrease in values ​​will end up affecting the income and consequently the survival of those who work performing lives, gameplay or not.

Last Wednesday (18), anonymous people created a Twitter page called Blackout of Twitch, which is mobilizing streamers to carry out a “strike” on August 23rd. On that date, those involved promise not to hold lives.

Twitch blackout: group is spreading image on networks with claims.

“We have a small community and were thinking of a way to mobilize and talk about recent Twitch decisions. In our debate, the idea of ​​making a ‘blackout’ came up to show our dissatisfaction. Everything was quite spontaneous,” he explained to TechWorld a member of the group responsible for the initiative.

The group calls itself “anti-capitalist” and makes a point of stressing that it has no leaders. Currently, around 40 people are part of the community. Another participant who spoke with the report explained that practically all Twitch’s Blackout members who do lives are small streamers.

“As the platform decision is quite recent, we haven’t felt such a big impact yet. The fact is, a lot of people are anxious and afraid, as the probability of the money in the account being smaller is very high. In addition, Twitch only allows withdrawal when a streamer reaches $100 (about R$538 at the current price). We know people who have been doing lives for 2 years and still haven’t managed to reach this goal”, argues the young woman.

Participants in the anti-capitalist movement, who declined to be identified because they said they are getting hate on social media, commented that they are already being supported by major content producers who have pledged to join the strike next week.

They commented that they don’t have many demands, as everything is quite recent. However, the main complaint is in relation to the unfair distribution of the amount paid for each entry, which according to them is just over R$2. “We have our audience, who like to follow our lives and want to help us financially. However, with the payment, our viewers end up helping Twitch more than we, the content producers”, comments the representative.

In the end, they defend that they must not stop the movement and that they will continue to mobilize until the Amazon platform knows “they exist”.

In addition to the streamers themselves, the strike calls for viewers not to access the platform on August 23rd. The hashtag #apagaotwitch, created by the movement, even entered the trending topics in Brazil, with more than 2,200 tweets around 6pm yesterday.

Even before the emergence of Twitch’s Blackout, União dos Streamers had already appeared on social networks. Despite being nicknamed the “streamers union”, the group is actually a gathering of content producers who have claims for the platform:

“Twitch’s posture means that doubts about reliability are constantly raised, making it impossible to ask for trust from its taxpayers while the company seeks to build a one-way communication channel”, says an excerpt from a communiqué written and published by the União dos Streamers. 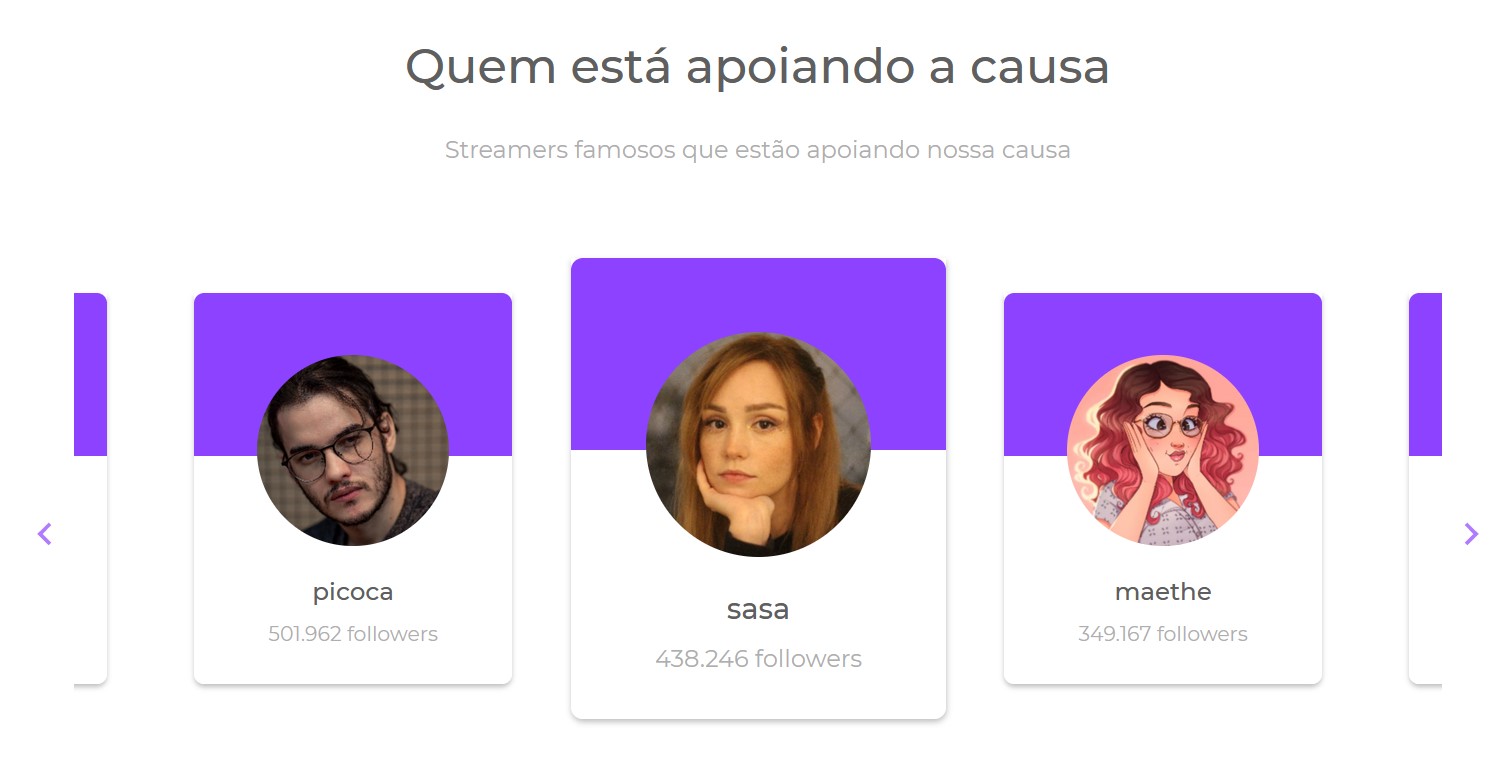 União dos Streamers has content producers with more than 500,000 followers.

The group is collecting signatures and, according to the official website, it already has the agreement of 2,595 streamers and 2,692 viewers (as of yesterday). The sum of the communities of content producers who signed the manifesto has more than 13 million followers.

What does Twitch say?

O TechWorld contacted Twitch to question the demands and the dialogue demanded by both União dos Streamers and Twitch’s Blackout.

Until the closing of this report, however, the company did not comment. The article will be updated if the questions are answered.