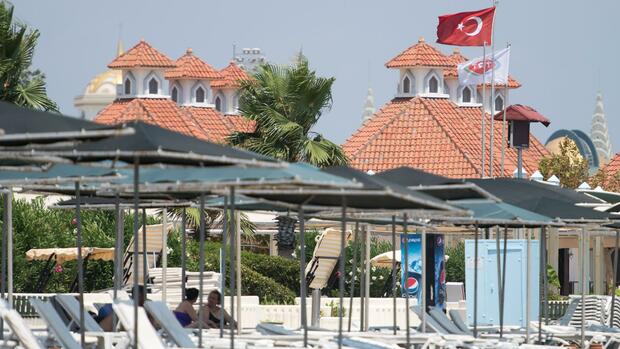 Antalya The Turkish government is attempting a tightrope act in the struggle to lift a travel warning from several European countries. Tourism Minister Mehmet Nuri Ersoy, in an interview with the Handelsblatt, avoids a direct request to the Federal Government to lift the travel warning from the Federal Foreign Office, but confirms negotiations between the two governments. “There are talks at ministerial level.”

The federal government’s travel warning for Turkey is currently valid until at least August 31 and contains political explosives. Turkey is calling for the warning to be lifted, Germany is asking for political concessions, according to the Handelsblatt. The question of whether Germans can go on vacation has long become a political issue. At the same time, Turkish hoteliers, but also German travel agencies, are facing bankruptcy.

The minister does not dare to predict how many tourists will come this year. “Air traffic has just started. We will only be able to make a forecast in the second half of the year. ”Last year, 45 million tourists came to Turkey, over five million from Germany alone.

Turkish Foreign Minister Mevlüt Cavusoglu said in a press briefing that Turkey is now also publishing infection figures on a regional basis. “We did this at the request of Chancellor Merkel after talking to President Erdogan,” says Cavusoglu.

The number of infections in the tourist strongholds is indeed extremely low. Since the beginning of June, Antalya has recorded a maximum of eight new cases a day. Four cases are currently being treated in intensive care medicine, according to statistics, an infected person must be ventilated.

In the Mugla province, which includes the towns of Fethiye, Marmaris and Bodrum, this value is currently zero. In total, the Antalya region alone has a capacity of 7483 beds and 848 ventilators, as confirmed by the regional office of the Ministry of Health.

Meanwhile, the bosses of major resorts in the south of the country are losing money every day. The beach of a deluxe hotel in the resort of Lara near Antalya is largely untouched even in the afternoon. Hundreds of employees prepare food, regularly clean the hotel complex with disinfectants and take care of repairs. That costs money.

At the same time, only 17 of the approximately 400 rooms are occupied. Other hotels are completely closed. Turkish offices are currently not accepting bankruptcy applications. How many Turkish hoteliers will survive the current doldrums is unknown.

The pressure on Ersoy and Cavusoglu is great, and the presidential office in Ankara is also demanding results soon. President Erdogan had already phoned Chancellor Angela Merkel on the matter. It is now up to the ministers to convince the decision-makers. To do this, they invited journalists and diplomats from Europe to Antalya. Already at the airport, everyone is shown that “social distancing” and hygiene are very important.

The government has set up a special certification program for hotels and other tourist facilities that includes over 130 measures. This includes regular checking of the body temperature, also with thermal imagers directly at the hotel entrance. In addition, dispensers with disinfectants are set up everywhere, stickers on the floor of the airport and in hotels indicate the distance rules. Disposable masks are distributed free of charge on the plane, in coaches and in hotels, as are disinfectants. The program is checked by TÜV Süd.

In addition to health and well-being, there is more: politics. There is a crunch in the relationship between Ankara and most European governments, especially Germany and France. The measures presented are aimed not only at potential tourist tourists, but also at the superiors in the European capitals.

The question of travel warnings for Turkey has long been mixed up with other political issues. The federal government, among others, sharply criticizes the tough measures resulting from the failed coup attempt almost four years ago. For Turkey, the criticism is in turn cause to question whether Europe feels enough solidarity with the victims of the attempted coup.

Not everything runs smoothly with the Refugee Pact. EU members have only actually transferred half of the promised six billion euros. Ankara unilaterally opened the Greek border to migrants and refugees in early March after over 30 Turkish soldiers were killed in an attack in Syria. The result was ugly scenes on the Greek-Turkish border fence.

In the eastern Mediterranean, Athens and Ankara also cross over sovereignty rights related to natural gas test drilling. Handelsblatt has learned from diplomatic circles that Greece is blocking many Turkey initiatives in EU bodies.

Trust has long ceased to be a constant in the Turkish-European relationship. Instead, distrust and the premise of not making things too easy for the other side dominate. In this mixed situation, recommending millions of holidaymakers to Turkey during a pandemic seems utopian from the point of view of Europeans.

A German couple has gathered on the beach of the luxury hotel. They don’t want to give their names, but they don’t hide their joy. “When do you go on vacation in a five-star hotel in summer and have almost the entire beach to yourself,” says the wife. The flight did not bother her, she had felt comfortable since her arrival. “I don’t understand why we shouldn’t go here.”

More: A vacation in corona times is especially possible in Germany and other European countries. Which policies ensure a carefree time.