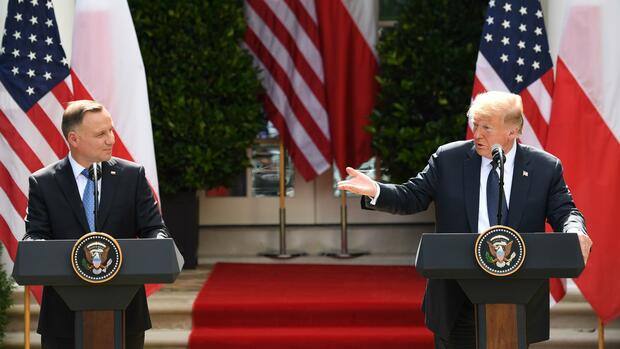 Washington US President Donald Trump wants to strengthen the American troops in Poland with the partial withdrawal of soldiers from Germany he is planning. Trump confirmed on Wednesday (local time) at the White House at a press conference with Polish President Andrzej Duda that the presence of US soldiers in Germany should be “significantly” reduced to 25,000. Trump justified the move again with what he considered to be Germany’s lack of defense spending.

Some of the soldiers from Germany should return to the U.S., Trump said. More soldiers would be relocated to other locations in Europe and “Poland will be one of these other locations”. Poland has agreed to pay for US troops in the country. Around 34,500 US soldiers are currently stationed in Germany.

Duda said that when he met Trump, he advocated not withdrawing US soldiers from Europe. “I asked President (Trump) not to withdraw troops from Europe because Europe’s security is important to me,” said Duda. The American military presence had guaranteed security since the end of World War II. If part of the US troops are withdrawn from there, it will be at risk.

Trump again criticized the Nord Stream 2 Baltic Sea pipeline, which is to bring gas from Russia to Germany, on Wednesday. “Germany is paying Russia billions of dollars to buy energy from Russia through this pipeline.” At the same time, the United States wants to defend Germany against Russia. “I think that people in Germany are very unhappy about it.”

US soldiers in Poland are said to deter Russia

The national conservative PiS government in Warsaw has long wanted to have more US troops in their country – above all as a deterrent to Russia. The performances range up to a permanent US military base in Poland, known to the Polish public as “Fort Trump”. So far, US soldiers have been stationed there on a rotation basis, according to the Polish government, currently around 5,000.

Trump pointed out that Poland, along with the United States, was one of only eight NATO countries that met the Alliance’s two percent goal. Germany, on the other hand, only pays a fraction of it. Trump spoke of “a little over one percent,” but it could be – depending on the calculation – less than one percent, he said.

NATO’s two percent goal is for all Allies to approach the goal of spending at least two percent of their gross domestic product (GDP) on defense by 2024. Germany has increased spending significantly in recent years, but was still only at 1.38 percent of GDP in 2019.

Defense Minister Annegret Kramp-Karrenbauer called on the United States to adhere to NATO agreements with Russia in the event of a possible transfer of troops from Germany to Poland. In an interview with the Atlantic Council think tank, she reminded the American allies of the 1997 NATO-Russia Act, in which NATO refrained from permanently stationing “substantial forces” in the former member states of the Warsaw Pact or the Soviet Union.

Resistance in your own party

Trump’s plans to withdraw soldiers from Germany are also provoking considerable resistance in his own party. The leading Republican on the House Foreign Affairs Committee, Michael McCaul, and five of his republican counterparts on the panel asked Trump to reconsider the decision in a letter released on Tuesday (local time). Withdrawing US soldiers from Germany would also “jeopardize US national security,” they warned.

Former US force commander in Europe, Ben Hodges, had described Trump’s plans to reduce troops in Germany as a weakening of the US and NATO as a whole. “I heard that this should be a punishment for Germany. Unfortunately, this shows a total lack of understanding – both with the US President and with the former US Ambassador in Berlin, Richard Grenell, why we have soldiers in Germany, ”said the retired three-star general of the dpa. “They are not there to defend Germany, but they are there for us.”

With a view to the upcoming elections in Poland on June 28, Trump was convinced that the Polish president would be successful. “I think he has a choice and I think he will be very successful,” Trump said at the start of the joint press conference.

When asked about the criticism of the influence on the election, Duda said that Trump and he only fulfilled their duties as president. “The president must represent the interests of his country,” said Duda. The corona pandemic had messed up original meeting plans and agreed to meet as soon as possible.

Incumbent Duda leads in current surveys with values ​​around 41 percent. His main challenger is Warsaw Mayor Rafal Trzaskowski, who is in the running for the liberal-conservative opposition coalition coalition (KO). It is currently around 30 percent. If no candidate receives more than 50 percent of the vote in the first ballot, a runoff election is scheduled for July 12.

More: Republicans urge Trump to refrain from withdrawing from Germany.