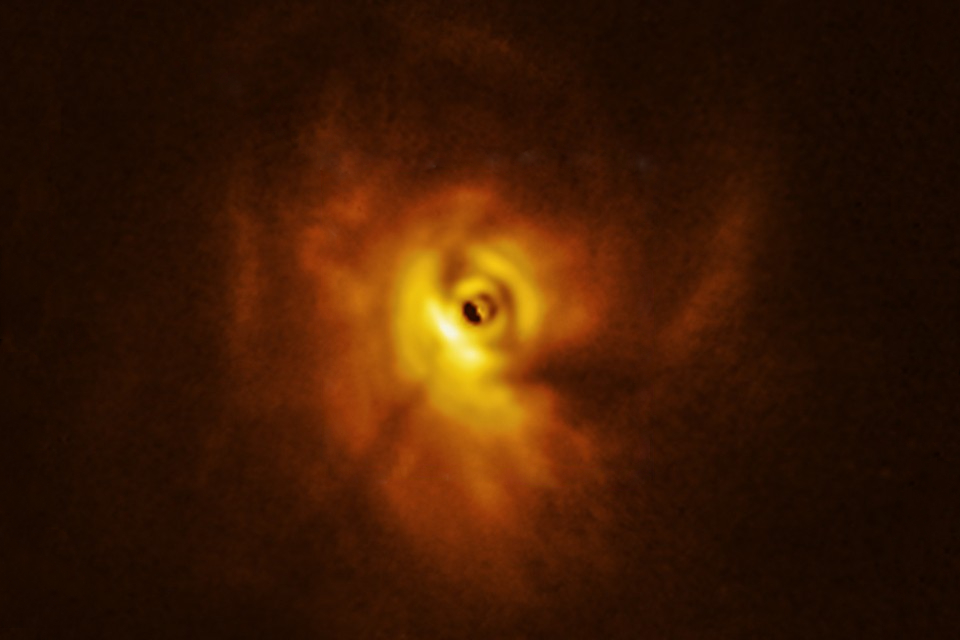 The word cosmos comes from Greek κ? σμος (kosmos), which literally means well ordered, but it seems that the concept is ignored by a star system known as GW Orionis, 1,300 light years away from Earth, in the constellation of Orion. If solar systems normally have stars and planets in rather flat orbital lines, this consists of three stars, a deformed and fragmented disk around them and an unaligned ring located on the inside, next to the star trio.

The discovery was made by an international team of astronomers with data collected through the European Southern Observatory (ESO) and the Atacama radio observatory (ALMA) telescope system, a set of 66 antennas spread across the Chilean desert.

The study, published in the journal Science, provided the first direct evidence that groups of stars can separate their planet-forming disc. “The images reveal the extreme case of a misaligned ring that came loose from the disk due to the gravitational forces of the stars, which, in turn, do not follow orbits in a plane, but in inclined trajectories,” said Stefan Kraus, astrophysicist at Exeter University.

Crooked orbits from the cradle

This inner ring formed of gas, dust and plasma has 30 Earth masses, enough to create planets – and they will have crooked orbits just like their cradle.

“All planets formed within the misaligned ring will circle the star in highly oblique orbits. We anticipate that many of them will be found in future observation missions, such as the Extremely Large Telescope (ELT),” explained Kraus’s colleague, also astrophysicist Alexander Kreplin , referring to the new ESO equipment that is expected to come on stream at the end of this decade.

The animation below allows you to see the warped disc and the tilted ring that was torn by each star’s gravitational pull.

They spent more than 11 years observing the system to study how the three stars behaved and to map their orbits. The biggest surprise was due to the images of the inner ring, confirming how misaligned it is.

By capturing the shadow that the ring casts on the disc, the researchers were able to determine the shape of the set and define a 3D model. From there, it was possible to model scenarios that explained the trio’s strange behavior, which ended up generating the crooked ring and the misaligned disk. What has been discovered is that the collision caused by the gravitational pull of each star on different planes was responsible for the system’s bizarrity.

For the first time it was possible to link the observed misalignment with the so-called disc rupture effect theory: the conflicting gravitational attraction of the stars, plus the misalignment in the orbits, caused the disc around the trio to break, dividing into rings warped and crooked.

“We think that the presence of a planet between these rings is also necessary to explain why the disk broke,” said Jiaqing Bi, an astrophysicist at the University of Victoria. He led another study, published in May in The Astrophysical Journal Letters, which identified the three stardust rings – the most external and the largest ever observed, among planet-forming discs.