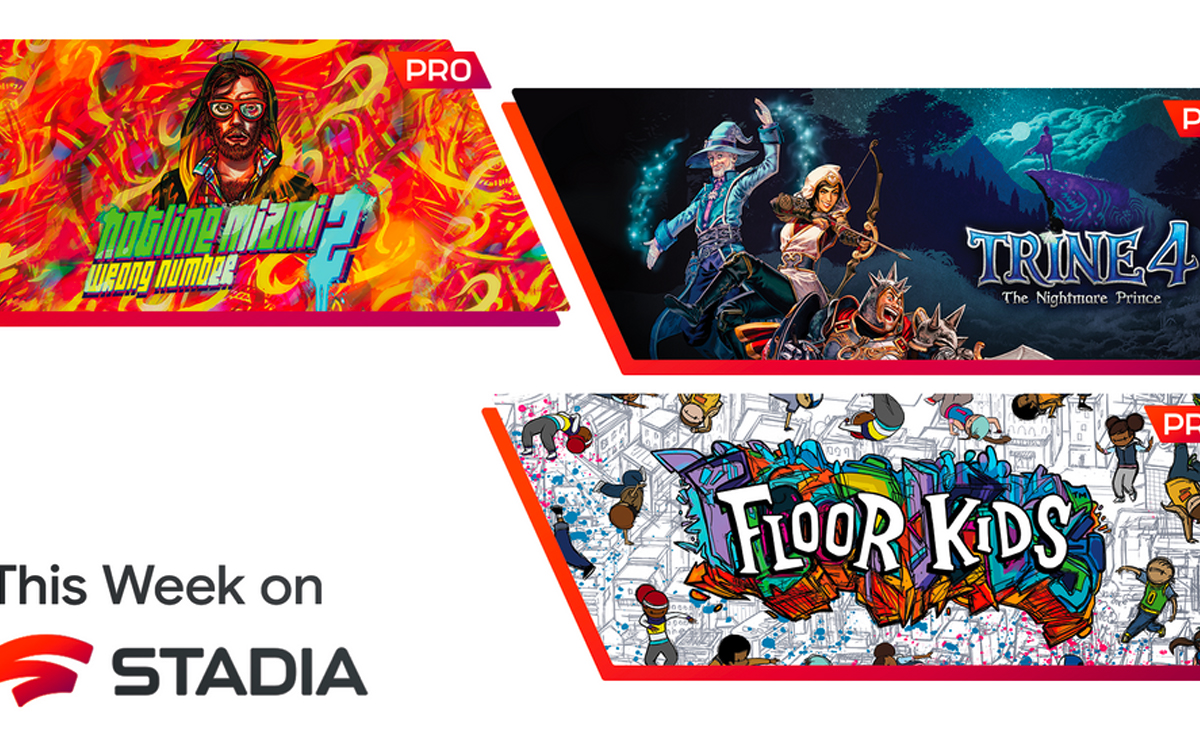 With your Stadia Pro subscription you can unlock three new games in May 2021. Google offers you the opportunity to discover in a few days the Trine 4 games, the nostalgic shooter Hotline Miami 2 and the freestyle breakdance game Floor Kids – on beats of Kid Koala.

Stadia offers three or four games every month to Stadia Pro subscribers. The subscription costs 9.99 euros per month and provides access, in addition to this selection of games offered, to better definition streaming (4K) and a shower of discounts on the purchase of games in the Stadia Store. In April 2021, Google made it possible to unlock Resident Evil 7, SpongeBob SquarePants and YS VIII Lacrimosa of Dana for free. This month Stadia Pro unlocks 3 new games for free.

Trine 4 The Nightmare Prince is free for Stadia Pro subscribers

Trine 4 is a 2.5D puzzle platform game developed by Frozenbytes. You will dive into the adventures of Amadeus, Potius, and Zoya as they go in search of Prince Selius. Trine offers a local or online multiplayer mode. The story is gripping: you follow the adventures of a prince haunted by his demons as you venture into fairy tale landscapes with nightmarish accents. The game features fights, lots of challenges and lots of action!

Hotline Miami 2 is a delightfully retro shooting game developed by Devolver Digital. The plot takes place before and after the events of the first installment, and centers around the story of the character of Jacket, whose favorite pastime is to massacre entire sections of the Russian Mafia on the orders of mysterious voices who leave messages on their answering machine… an entire program !

Floor Kids is a freestyle breakdance game on the music by the famous Kid Koala. The player is therefore free to move around and a sophisticated points system rewards the rhythm, originality and style of your choreography. Hundreds of different movements are possible with an infinite number of permutations. The game offers two modes, a single player mode and a multiplayer mode where you can compete against your friends. There is also a story mode, in which the player must choose one of the characters in the game and assemble their crew.

Resident Evil VII is hands down one of the creepiest games in the franchise. The plot takes place a few years after Resident Evil 7 with Ethan Winters in the lead role. Ethan is with his wife Mia and daughter Rosemary when Chris Redfield appears and kidnaps him. He wakes up in a mysterious village somewhere in Europe. Ethan crosses the village to save his daughter. The place is ruled by four different mutant bosses each with their own army of monsters …

From May 2, 2021 at 2 a.m. (a great schedule to immerse yourself in the gloomy universe of the game) you will be able to test Resident Evil Village for 60 minutes – until May 9. This demo is open to all Stadia players whether they have a Pro or Base subscription.

Google continues to roll out the promised features ahead of the launch of Stadia in a dribble fashion. In some cases, Google has already announced that a feature is available when almost no game supports it. This is the case of State Share, which allows you to create a link for your friends and followers to join you at a specific point in a game. In February 2021, we announced that Stadia has activated State Share in Hitman III. You can now also use the feature in Serious Sam 4.

The other news for the month of May 2021

Stadia is also offering a handful of new things this month. the game Legend of Keepers Career of a Dungeon Manager lands on Stadia this Thursday. Your mission will be to protect your own dungeons with trap monsters and magical artifacts, and outwit heroes. The game skillfully blends the managerial dimension of The Sims with the role-playing genre. You can buy it on the Stadia Store from April 29, 2021 at 6 p.m. for around twenty euros.