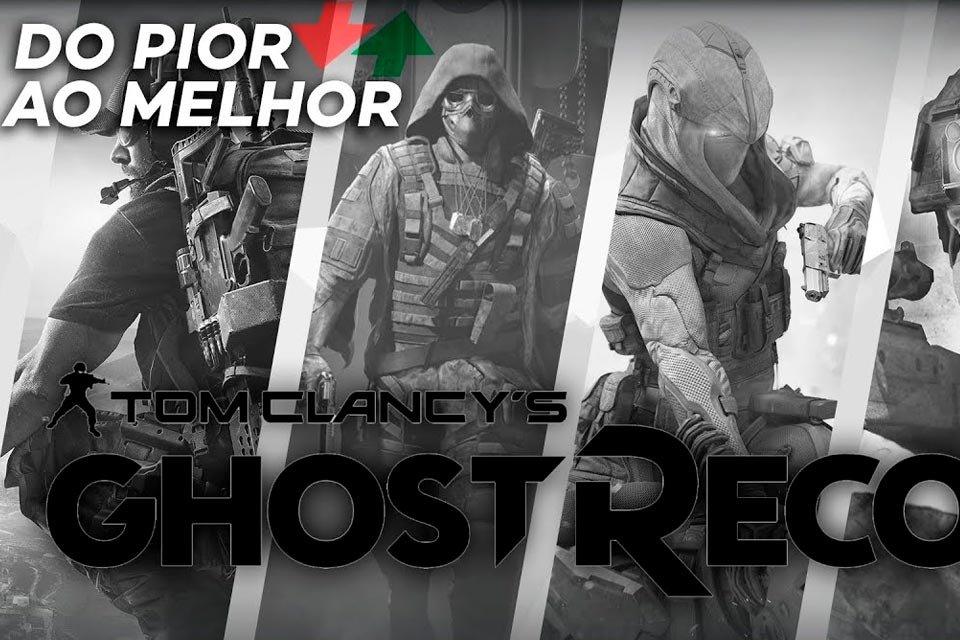 Writer Tom Clancy has written several works that have become best sellers and have been adapted for various unwritten media. It was in his partnership with Ubisoft that his name became even better known and yielded several memorable games.

The series we’re going to talk about today is about a group of military men who are extremely silent as ghosts, but lethal as a shot to the head. You asked a lot and here’s the one from Worst to Best of the franchise Tom Clancy’s Ghost Recon. Here are our criteria, pay close attention:

Tom Clancy’s Ghost Recon was released in 2010 exclusively for the Nintendo Wii and puts the player in the shoes of the US Army Rangers who must face Russian soldiers after an ultranationalist leader seizes the country on the basis of military force.

As expected from a game released for the Wii, it uses motion control in one main mechanic: aiming. It can be played entirely in two players, and if it’s solo, the other character becomes an NPC ally.

For analysts, shooting on the move creates a sort of satisfying pace, and the use of the weapon-shaped peripheral Wii Zapper makes the experience even better. In contrast, firefights have very little depth, enemies are dumb as doors, and friendly AI is very limited. Your grade is 46.

In seventh place, the most recent game in the franchise. Tom Clancy’s Ghost Recon Breakpoint, released in 2019, focuses on online multiplayer and takes place on the fictional island Auroa, which offers a huge area to be explored. Players assume the role of soldiers from the US 5th Special Operation Force, known as the Ghosts, who must investigate some important military issues at the scene.

The title brings several stealth mechanics, such as cover, silent weapons and camouflage, the latter even involving aspects of the environment to go unnoticed. Initially, he had 4 classes to choose from, each having specific abilities. To close, the enemies are outnumbered and better prepared than those present in its predecessor, Wildlands, and the story mode brings speech options in the dialogues.

The game did very poorly in sales, which was stated by the CEO of Ubisoft, and also in criticism. While the stealth is satisfying and the headshots are impactful, the survival mechanics are poorly crafted, the enemy’s AI sucks, the game’s social hub is crammed with microtransactions and it fails to develop its ideas and come up with something new. His grade is 58.6.

Tom Clancy’s Ghost Recon 2, released in 2004, was ranked sixth on our list. Its plot is not the same on all platforms. While on Xbox the protagonists aim to prevent a nuclear attack by North Korea after the events of the previous title, on PS2 and GameCube the American Ghosts want to face the North Korean government after an attack on their troops. Not only that, but they also take place at different times, respectively in 2011 and 2007.

The player has at his hand a very large variety of weapons, such as submachine guns, carbines, snipers and rifle that must be used in the most diverse missions available, including those entirely solo. There is also a multiplayer that features several coop modes, such as campaign missions, battle and defense, as well as counter modes.

Analyzes showed the difference between versions. The Xbox one was praised for its feature-rich multiplayer and good graphics, but criticized for its over-revised single mode, bad enemy animations, and little gameplay variety. The PS2 and GameCube version was praised for its online multiplayer and its realistic theme, but criticized for its generic gameplay, useless squadmates, totally linear missions, lack of a coop mode and a lousy frame rate. Even with a great Xbox version, the title’s average was very low, which earned it a 64 rating.

Fifthly, we have Tom Clancy’s Ghost Recon Advanced Warfighter, released in 2006. The player against the commander of a squad that must complete various missions tactically and strategically.

It has three different versions, so let’s quickly talk about each one. The one on PS2 and Xbox can only be played in first person and has fewer features than the other two, including a smaller number of NPC allies during missions, shorter levels and a lack of speaking by the character Scott Mitchell.

The PC game can only be played in first person, has higher levels than the consoles, the instruction system for allies is more flexible, you can only choose the weapon before starting the mission and there is a weight limitation for each character. can charge.

Finally, the Xbox 360 allows the player to choose between first and third person during the campaign, features a unique cover system, features “on-rail” style levels and does not allow players to recover ammunition from fallen enemies, even if be possible to take their weapons if necessary.

The Xbox 360 version was highly praised for its realistic graphics and deep gameplay. The one on the PC wasn’t as highly regarded as it was, but it still pleased a lot mainly due to the immersive atmosphere, good artificial intelligence and variety of weapons. What really hurt were the PS2 and Xbox, which pulled the note down, getting to 70.

And also in fifth place, we have Tom Clancy’s Ghost Recon Phantoms, released in 2014 exclusively for PC. The title differs a lot from the others cited for being an online multiplayer with elements of MOBA completely free.

It featured 3 classes, Recon, Support and Assault, each with several unique abilities that could be chosen by the player to align the best strategy with his team. There were 4 game modes available which were Private Match, Team Death match, Clan Match and Team Capture.

A Wii U version of the title was announced, but plans changed and the team focused on the PC version. In 2016, the servers were shut down due to a slow but steady drop in players on the servers.

Analysts at the time felt that the abilities of each class made the games more strategic, the dynamic cover system worked very well, and there was no need to pay for fun unless you wanted extra content. On the other hand, there were few maps and mods other than the matchmaking was inconsistent and unbalanced. Your grade is 70.

Fourth, let’s go back to the origins with the first title in the series. Tom Clancy’s Ghost Recon, released in 2001, follows the elite American Ghosts team that is on a mission to fight the rebel separatist group in Georgia, which ultimately leads to a clash with forces of the Russian Democratic Union.

The title has a very tactical feel in which four soldiers, one of them being the player controlled, must work together to accomplish specific missions. In the campaign, there are 4 skills to upgrade, improving your skills with weapons, stealth, stamina and leadership. Also, soldiers have different classes that allow or prevent them from using specific weapons.

The title was highly praised at the time for redefining the tactical shooter genre alongside other games like Rainbow Six, but he ended up missing our podium due to the poor performance of the GameCube and PS2 versions, which earned him the 71.5 mark.

And by a hair’s breadth, we’ve reached the top three starting with Tom Clancy’s Ghost Recon Wildlands, released in 2017. The game takes place in Bolivia in 2019, with the Ghost group in charge of dismantling the drug cartel known as the Santa Blanca Cartel that became the world’s largest cocaine producer.

The open world is gigantic, being the biggest developed by Ubisoft until that moment. Several weapons and equipment, whether real or created for the game, are available to be used and bring more effectiveness to the game. The title also features dynamic weather and night and day cycle systems, land and air vehicles, several side missions and a cooperative multiplayer mode.

Analysts found its stealth gameplay great, the randomness system during creative confrontations and the open world full of activities, but the missions get tiring as time goes by and the story doesn’t have much motivation. Your grade is 71.6.

With the silver medal, Tom Clancy’s Ghost Recon: Future Soldier, released in 2012. The game has a futuristic feel and follows the Ghost squad, led by Joe Ramirez, whose initial mission is to end an arms smuggling operation in Nicaragua.

The title brings as its main novelty adaptive camouflage, which allows soldiers to be partially invisible. There is also a synchronized shooting mechanic, in which the player gives instruction and everyone shoots their targets at the same time, and drones, which can be used to view the entire battlefield.

Analysts praised the multiplayer modes, the synchronized shooting mechanics, and the length of the solo and coop campaign, but it was criticized for its unremarkable shootouts and various AI problems. His grade is 76.3.

And we got first place with him, Tom Clancy’s Ghost Recon Advanced Warfighter 2. Your story takes place right after the events of the first Advanced Warfighter and focuses on the conflict between the American army, the Mexican army and Mexican rebels.

The PS3 and Xbox 360 versions have gameplay very similar to its predecessor, but it adds new features and brings general improvements. Meanwhile, the PC version looks more like the first game in the series, although it retains the same footprint as Advanced Warfighter 1. It has a multiplayer mode with some different features like weapon classes and the ability to slide, but it takes away the cover system present in singleplayer.

Analysts praised its extremely intense combat, competitive and cooperative multiplayer mode, beautiful graphics and excellent sound effects, but it was criticized for the extremely short campaign. Even so, the game impressed and got 82 of note.