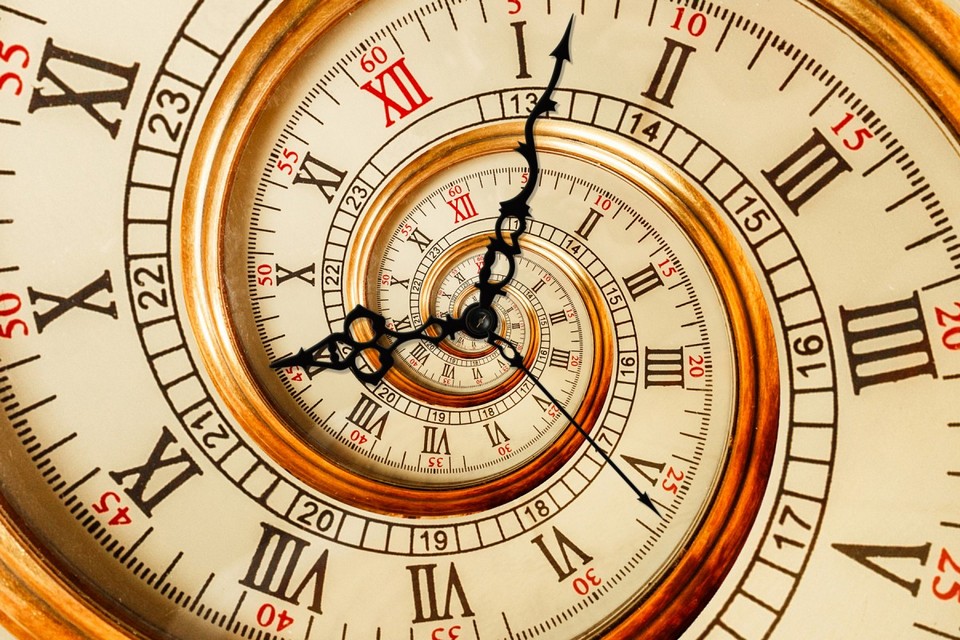 In an instant, he was in his laboratory; the next, Sam Magruder found himself naked, with muddy water up to his waist, in a wild swamp and running scared of a dinosaur. This is at the heart of the book that paleontologist and evolutionist George Gaylord Simpson called The demonization of Sam Macgruder – a scientist’s time travel from the year 2162 to the Cretaceous, 80 million years in the past. Simpson, one of the most brilliant scientific minds of the 20th century, described, in his book, one of the greatest enigmas faced by physicists: time travel.

We live constantly between the present and the past. If the light travels at 300,000 kilometers per second, the screen where you are reading these words is, in fact, in the past. That is why the physicist Albert Einstein (with the help of the German mathematician Hermann Minkowski – Einstein was terrible at mathematics) described time not as a constant but as a dimension: the space in which we live is made up of three dimensions (width , length and depth); time would be the fourth.

The traveler who travels our Universe (be it to the dumpster in the corridor, Mars or the nearest galaxy) would have four coordinates to guide him: three from space and one from time – which, conventionally, just runs forward. The first question that arises is: at what speed?

Limit between present and past

According to Einstein predicted in his theory of special relativity, the faster you advance in the three dimensions of space, the less you progress in the fourth (time). According to the German physicist, there is a limit to how far you can increase your acceleration, and that is the speed of light. Because, theoretically, if you reach it and pass it, you will arrive at the moment before the light left its starting point.

But the closer to the limit point, the more time slows down – from an observer’s point of view, not for those traveling; this is called “time dilation”.

If you are on a spaceship thinking about throwing your garbage into the orbit of the blue supergiant Icarus, nine billion light years from Earth, and still getting home in time for the novel, when you return to Earth you will find the Sun dead and the planet, like a piece of coal floating through an unrecognizable solar system.

“The passage of time would seem absolutely normal to me. My watch runs at the right pace, I age normally, movies run at the right pace. I am no further from my future than usual. But I traveled to my twin brother’s future, ”explains physicist Janna Levin of Barnard College about what has come to be known as the“ twin paradox ”. The journey to the future would be, in this way, possible; the drawback would be, however, that only travelers could enjoy their discoveries.

Traveling to the future

Physics thought of some solutions:

In 1974, astronomer Frank Tipler imagined a structure in the form of an incredibly dense rotating cylinder, about a hundred kilometers long and ten kilometers wide. Inside, there would be something with a mass ten times that of the Sun, rotating about billions of times per minute (Tipler suggested that this could be done using a rotating black hole, a neutron star or even a pulsar; the cylinder would have, therefore, it must be made of a material strong enough not to be crushed by gravity itself or torn apart by the centrifugal forces that it would experience when turning).

The result would be the creation of the call closed timelike curve, or closed time-like curve – a curvature of space-time that would allow you to travel into the future and return to where you left off.

A spacecraft, leaving Earth, would reach that cylinder (known as the Tipler Cylinder) and complete some orbits around it, remaining in the region around the structure where space-time is most deformed and then, returning to Earth, where time would have passed more quickly than on board (the good old dilation of time); how much would depend on how many times you went around the cylinder. The limitations on this project speak for themselves.

Traveling from point A to point B faster than light in a vacuum would, according to Einstein, make anyone have infinite mass and length 0. But, assuming space-time can be doubled, Einstein thought about the possibility of cutting a path , using what has become popular called “wormholes”. The equations make these passages possible, physically; the problem is that, in addition to allowing only particles to pass through, they would collapse almost instantly.

In the so-called closed curve of the time type, the traveler will always return to the point where his journey began, no matter how many turns he takes in space-time.Source: New Scientist / John Papasian / Reproduction

Astronomer Carl Sagan was the first to think about it, asking his friend and physicist Kip Thorne to think about whether it would be possible to use holes in the space fabric to visit the future (he used this idea in his book Contact). Thorne, winner of the 2017 Nobel Prize in Physics for his work in the detection of gravitational waves, is one of the founders of the Observatory of Gravitational Waves by Laser Interferometer´ (acronym in English LIGO), but is best known for having been the scientific consultant for the film Interstellar.

Speaking of director Christopher Nolan’s blockbuster, the film uses the idea of ​​a spaceship taking advantage of the spinning motion of a black hole to spin quickly (the same principle as the Tipler Cylinder).

Physicist Stephen Hawking, in an article for the newspaper Daily Mail in 2010, he wrote that astronauts “would go round and round the horizon of events, experiencing only half the time of everyone on Earth. The ship and its crew are said to be time-traveling. Imagine that they circled the black hole for five years: ten years would pass elsewhere. But it would be necessary to travel around the speed of light for this to work ”.

Astrophysicist Richard Gott built his career on two of the aspects that most fascinate the layman: time travel and the end of human civilization. Regarding the first item, he argues that it would be possible for human beings to use the space-time deformation caused by cosmic strings (narrow tubes of energy, remnants of the beginning of the cosmos, that extend throughout the Universe, that is, they are infinite and tangle like cobwebs).

The mass of these structures would reach ten quadrillion tons per centimeter; according to Gott, two strings parallel to each other and moving one after the other would distort space-time enough (the so-called “gravitational well”) to allow time travel.

Since 1895, when the British writer H. G. Wells launched the classic The time machine, it is a consensus in science that the human being will need a device that not only creates a closed curve of the time type but does not cause damage to its occupant.

First, for the machine to reach enough speed for the traveler to reach the future, it would take time for it to work. Physicists believed that an exotic form of matter, with “negative energy density”, whose existence is still a hypothesis in physics, is necessary.

In 1984, the physicist Miguel Alcubierre launched the idea that it would be possible to contract space-time in front of a ship and soon afterwards, make it expand behind it, without coming into conflict with the theory of relativity.

The ship, in fact, would not leave the place, but, comfortably installed in a bubble, would slide through the fabric of the Universe. The problem: the engine would have to be built with exotic matter, generating negative energy – both existing only in the theoretical field. However, there are already voices in physics that guarantee that it is possible to reach speeds close to that of light without this matter of bizarre properties.

Another idea, by researchers at Applied Physics, (an independent group of scientists, engineers and inventors that advises companies and governments on science and technology for humanitarian and commercial applications), suggests a disk-shaped spaceship (made of ordinary matter, in the absence of exotic), which would slide pushed by inertia, after reaching a certain speed. 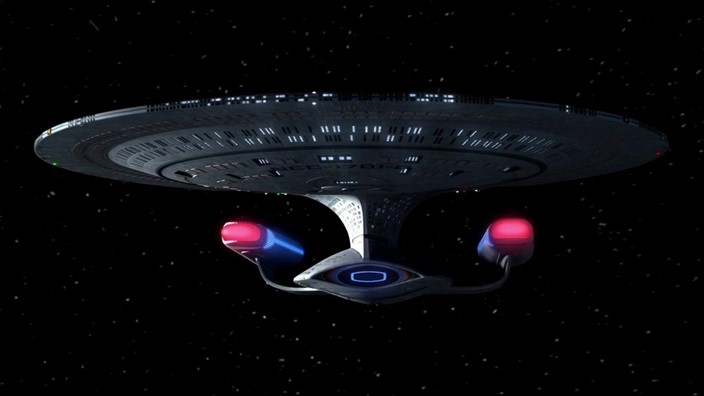 The designers of the Enterprise NCC-1701-D almost got it right.Source: Memory Alpha / Reproduction

Everything seems exciting, but the problem (there is always one) is that this prototype would have to be made of materials with densities unattainable by current technology.

Traveling to the past

Everyone must have heard of the “grandfather paradox”: a traveler goes back in time and kills his grandfather or even his parents, making his own birth impossible and, consequently, the future murder of his ancestors.

Some physicists argue that you would actually be born in a parallel universe – there would be one for every decision you make in life (turn left or right, wait for the next elevator or squeeze into what opens in front of you etc). Others, that the past cannot be changed, no matter how hard you try.

According to the calculations of researchers Germain Tobar and Fabio Costa, from the University of Queenslands (they mathematically proved that travel to the past is possible), whatever the traveler does (and they include in the work some possibilities that cause the so-called “butterfly effect” – small changes in the initial conditions of large systems, which can lead to drastic changes in the results), the events will adjust to avoid the temporal paradox.

“If you went back in time to prevent the first person from being infected with covid-19, you would become infected and become the zero patient. No matter what you did, events would be recalibrated around you and the pandemic would occur, giving the its older ‘I’ the motivation to go back in time and stop it, ”says Costa.

Sam Magruder (the 22nd century chronologist mentioned at the beginning of this article) managed to go back in time, going back to the middle of the Cretaceous period, 60 million years ago. To make this possible, George Gaylord Simpson created a process that he called “disqualification”. Magruder says that the present is, in fact, “a moving point in the moving temporal universe”. He imagines time as a discontinued line, in which the present would “skip” infinitesimal intervals.

His experiment consists of using a decelerator to extend these intervals, starting with “extending a millionth of a second until you perceive it as five hours”. When it increases the slowdown of time to the maximum, it is played in the past, 800 million years from the first human being to appear on the face of the Earth.

Sam Magruder found that he could not go back to his time because he did not yet exist.Source: Pixabay / Stefan Keller

Naked, accustomed to technologies that guaranteed his survival, Magruder then realizes that the trip to the past is a one-way trip: the future has not yet happened and, therefore, there is nowhere to go. We return to the idea of ​​infinite parallel universes,

Although time dilation may be (at least hypothetically) the way for human beings to visit the future, it seems that we will not be able to go back to the past; according to Stephen Hawking recorded in his book Black holes, baby universes and other essays “,” the best evidence we have that time travel [ao passado] it is not possible, and never will be, because we have not been invaded by hordes of tourists from the future. “