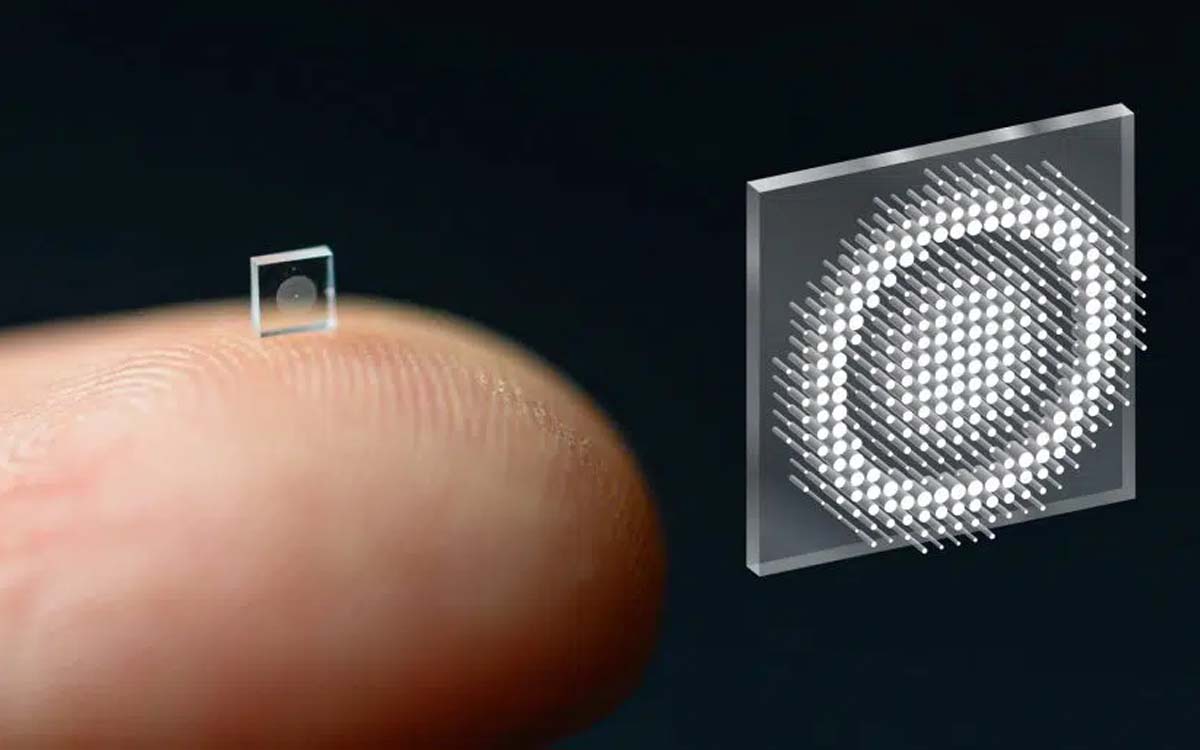 Researchers at Princeton University and Washington have developed a microscopic photo sensor the size of a grain of salt. According to their report, this device offers image quality comparable to that offered by sensors hundreds of thousands of times larger. This technology could be exploited in many fields, for example in medicine.

While Stanford University presented in 2020 the largest photo sensor ever built with its 3200 megapixels, American researchers from Princeton University and Washington have just unveiled what appears to be the smallest camera in the world, whose size is comparable to a grain of salt. And as microscopic as it is, the sensor does not forget to offer an image quality comparable to that offered by sensors hundreds of thousands of times larger.

“We demonstrate image quality comparable to that of a bulky six-element commercial lens, even though our design volume is 555,000 times less ”, they assure. As you can doubt, the challenge was sizeable, since scientists had to provide solutions to problems that directly affect the fundamental laws of optics, especially at the focal length, i.e. the distance between the lens and the camera sensor. The risk is to obtain with such a small sensor a blurred image, distorted and parasitized by chromatic aberrations with a shovel.

As the researchers explain, they exploited what is called “Metasurfaces” to work around these limitations. According to the CNRS, it is “optical elements composed of nanoelements which make it possible to avoid long propagation by introducing, along the optical path, abrupt changes in phase, amplitude and / or polarization on a thickness scale of the order of wave length”.

We could compare these metasurfaces to millions of small optical antennas that make up the sensor. Each of them is uniquely configured, so that they receive and process wavelengths of light differently. Of course, all the information is then collected by the sensor to convey a consistent and readable image.

However, metasurfaces are not a miracle solution, deformations and chromatic aberrations still subsisting despite their use. Like Google with the Pixel 6 (and previous Pixels), researchers had to resort to artificial intelligence and algorithms to reconstruct the image.

First, it was necessary to ensure that these millions of antennas were perfectly calibrated and configured, a daunting task given their number. To do this, researcher Shane Colburn has developed a computer model to automatically adjust and optimize the antennas while drastically reducing errors and anomalies. Then they used a reconstruction algorithm, boosted by machine learning, to detect downstream image defects and adjust them. The results obtained improve over the tests thanks to machine learning.

“With this work, we present an approach to achieve high-quality, color, and large-field-of-view imaging using neuronal nano-optics. More precisely, the learned imaging method proposed makes it possible to reduce the reconstruction error on the experimental data by an order of magnitude compared to existing work. The key factors in this result are our differentiable meta-optic imaging model and our new deconvolution algorithm ”, they explain.

Possible uses in medicine and robotics

Indeed, the researchers opted for silicon nitride to compose their sensor, a material similar to glass and compatible with standard semiconductor production methods. As precised, production on an industrial scale cannot therefore be ruled out, quite the contrary since the manufacturing cost would be significantly lower than that of traditional sensors. “We believe that the proposed method constitutes an essential step towards ultra-small cameras which could allow new applications in endoscopy, brain imaging or in object detection ”, the researchers conclude.