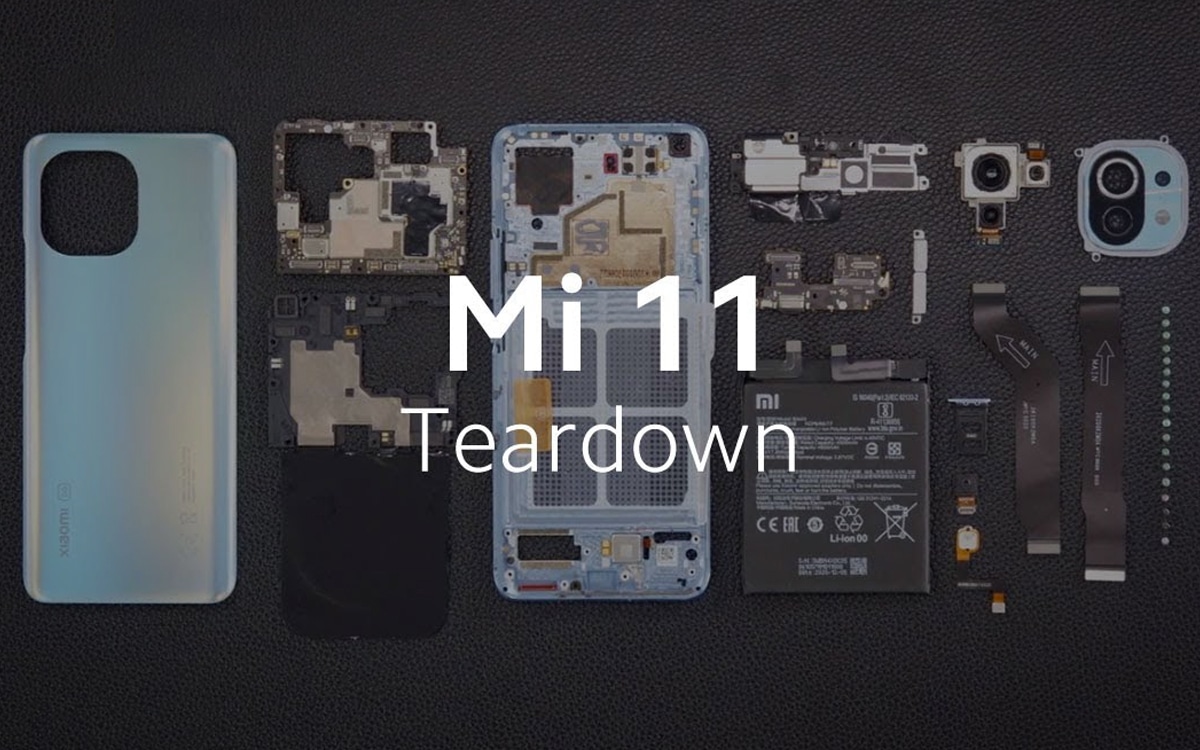 Xiaomi has just posted an official teardown of the Xiaomi Mi 11. The video highlights the components that make up its technical sheet, while demonstrating that repairs to the smartphone will be easy compared to competing premium smartphones.

Xiaomi is not the 3rd largest smartphone manufacturer in the world behind Samsung and Apple by chance. The manufacturer designs its products with maximum cost control and listening to the wishes of its customers – and, on top of that, practices some of the lowest margins on the market. With the Mi 11, the first 5G smartphone under Snapdragon 888 on the market, Xiaomi strikes a big blow. The Xiaomi Mi 11 should arrive in France by the end of February from 749 €. At this price we have 8 GB of LPDDR5 3200 MHz RAM, 128 GB of storage space, a 4600 mAh battery with 55 W wired and 50 W wireless fast charging (never seen before!).

The screen is a 6.81 ″ WQHD + AMOLED panel with 120Hz refresh rate for smoother animations, while the touch part is refreshed to 480 Hz for more precision. We also have a fingerprint sensor under the screen that doubles as a heart rate sensor, and the whole thing is covered in Corning Gorilla Glass Victus. Side photo sensors, we have a triple arrangement composed of a 108 MP main sensor, a 13 MP ultra-wide-angle sensor (f / 2.4) and a 5 MP macro lens. The selfie sensor is 20 MP.

Xiaomi publishes a teardown of the Mi 11 that makes you want to repair it (well almost!)

The disassembly allows to appreciate the modularity of the approach adopted by Xiaomi on this smartphone. Of course, it’s worth pointing out that this official video is edited by the pros, which may make some of the teardown steps seem easier than they actually are. This smartphone opens from the back. Xiaomi does not immediately show the difficulty of taking off the back and the chassis. It almost feels like the opening is trivial. Which, in our opinion, has no chance of being the case, as with most smartphones on the market.

However the smartphone immediately wins two good points. First, because usually the back of the smartphone is one of the most complicated (and expensive) parts to replace – here it is the one that has to be removed first. Then because the photo module is not integral with the rest of the back of the device. This simplifies the replacement of lens glass if it is broken or damaged. The shell of the module itself is an element designed in a single block. Note that the flash also serves as a mood light sensor. Once the back cover is removed, we discover the coil of the 50W wireless charger.

Then from the next step it seems that it is relatively trivial to disconnect all the modules from the motherboard and remove the latter. It is then also possible to separate the various photo sensors which are also plugged into special connectors. The video details in passing the location of the various chips that deliver its functionalities. In the upper part, on the left, we can see the Snapdragon 888. On its left, we find the UFS 3.1 storage memory chip as in Note 20. Below, a chip after, we find the WiFi chip 6.

The video ends with a disassembly of the curved screen on all four sides, which introduces us to its integrated fingerprint sensor. What do you think of the internal design of the Xiaomi Mi 11? Do you find the proposition interesting at this price? Share your opinion in the comments of this article! In the meantime, we suggest you discover the images of this dismantling in the video below: