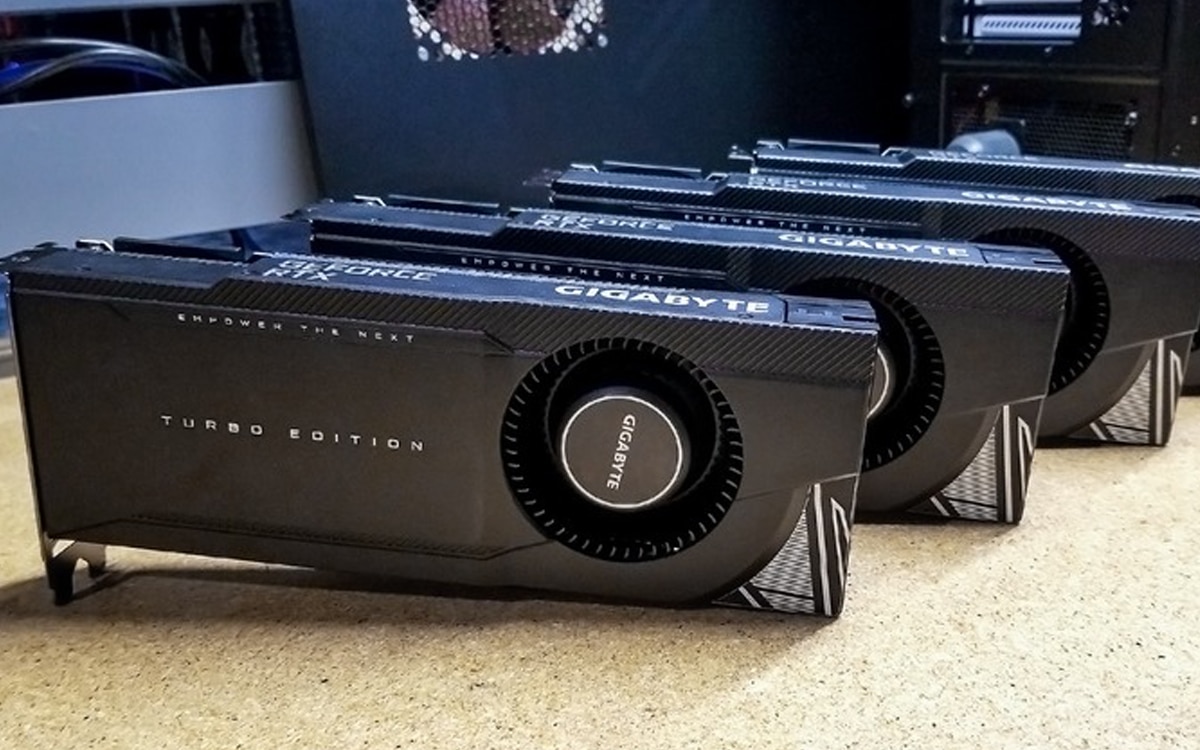 A PC with 4 Nvidia RTX 3090s, is it really viable? To find out, the manufacturer Puget Systems has assembled an astonishing computer powered by 4 units of the graphics card. Obviously, the power is there. But, unsurprisingly, the PC consumes a lot of electricity and generates a lot of noise.

Nvidia’s RTX 3090 is one of the most powerful GPUs on the market. It is also the fastest graphics card in the GeForce RTX 3000 range. The proof: a player managed to install the Crysis 3 game on the framebuffer of the graphics card. Unfortunately, the card is out of stock.

Engraved in 7nm, it offers 36 TFLPOPS for Shader Cores, 69 TFLOPS for RT Cores and 385 TFLOPS for Tensor Cores. To go even further, Puget Systems, a company specializing in the configuration of personalized computers, has developed a computer housing a total of 4 RTX 3090s. For its astonishing project, the American firm relied on custom GPUs offered by Gigabyte, the GeForce RTX 3090 TURBO 24G.

In addition to the 4 graphics cards, the PC is equipped with a Intel Xeon W-2255 10 Core CPU, a Noctua NH-U12DX i4 cooling system, an Asus WS C422 SAGE / 10G motherboard, a Samsung 970 Pro 512GB hard drive and 128 GB of RAM. “In order to find out if a configuration including 4 RTX 3090s is interesting for our customers, we wanted to test a number of configurations to look at performance, temperatures and power consumption” explains Puget Systems in the detailed account of his experience.

On the same subject: Nvidia GeForce RTX 3080 and 3090 – prices in euros are surfacing, beware it stings!

Result: a greedy and too noisy computer

This monstrous configuration obviously consumes a large amount of electricity. Assembling the four graphics cards alone consumes up to 1,400 W. To ensure the installation lasts, Puget Systems fitters used an EVGA SuperNOVA 1600W P2 power supply and limited the power consumption of each card to 300W. Despite everything, the maximum consumption was limited, advance the manufacturer. “We have technically been successful with four RTX 3090s on a single 1600W power supply but it is certainly not something we recommend” tempers the report. 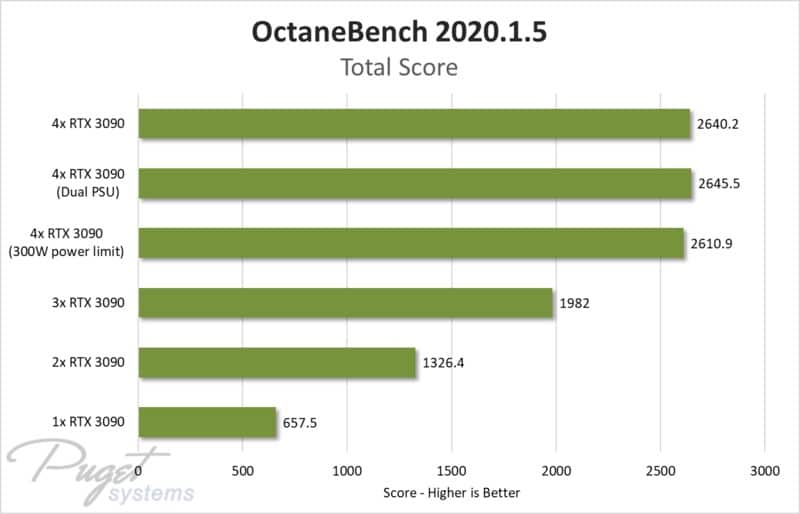 Once the monstrous machine was up and running, Puget Systems took an interest in the performance displayed by the PC and its incredible hardware. Several benchmarking software have analyzed the performance of the beast, including DaVinci Resolve, RedShift or OctaneBench. In most benchmarks, the integration of each GPU is accompanied by a 100% increase in performance, with the notable exception of the scores recorded on DaVinci Resolve. In this benchmark, adding the fourth card does not improve performance. Puget Systems attributes these results to the choice of CPU. 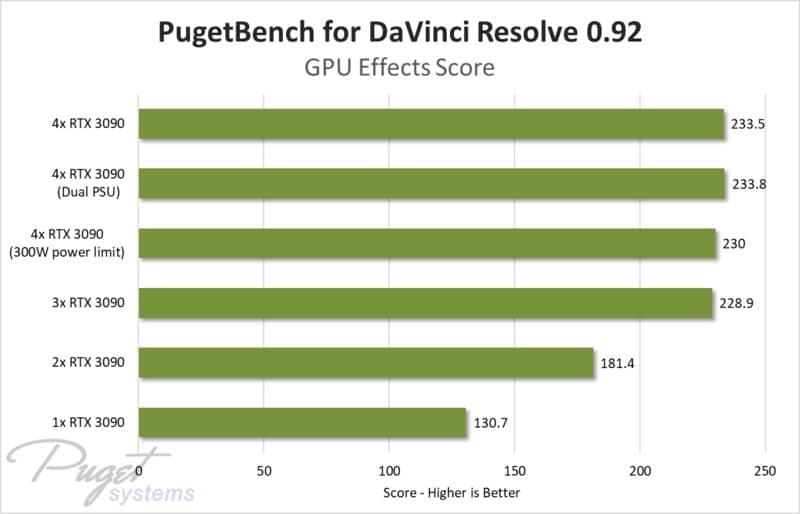 Then, Puget Systems was interested in the rise in temperatures caused by the presence of 4 RTX 3090s. Despite the cooling system put in place by the fitters, the temperature rose rapidly and “Peaked at 88% of maximum fan speed”. Ultimately, the system manages to prevent the temperature from reaching peaks. On the other hand, the noises of the fans quickly become deafening, as shown in the video below. 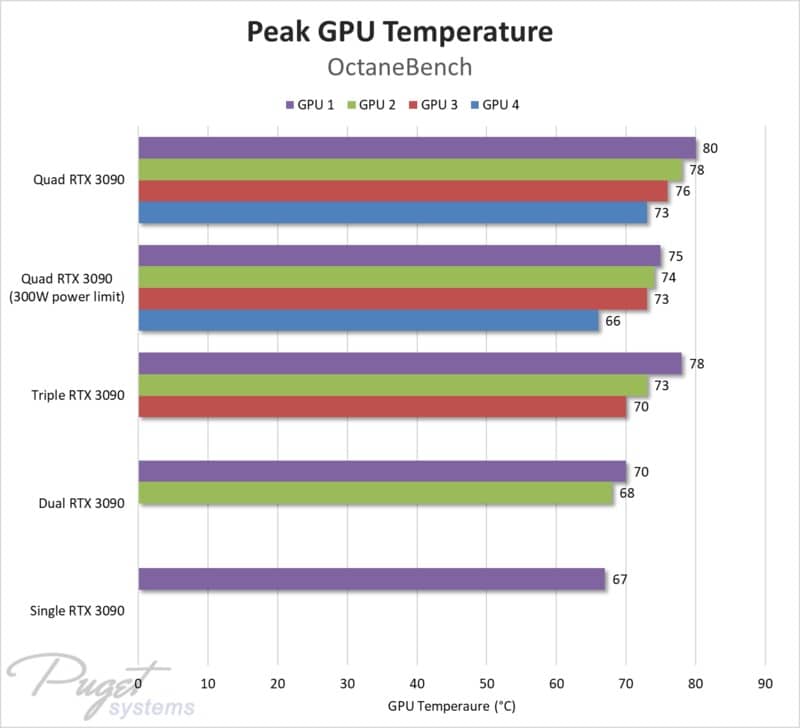 “We are probably not going to offer this type of configuration to the general public because of the problems of power consumption” concludes Puget Systems. To function properly, this installation requires a 20 amp circuit breaker … while most outlets in the United States do not exceed 15 amps. In Europe, we tend to revolve around 16 amps. In this context, the American manufacturer will rather focus on configuration with only 3 RTX 3090 cards. That’s not bad.