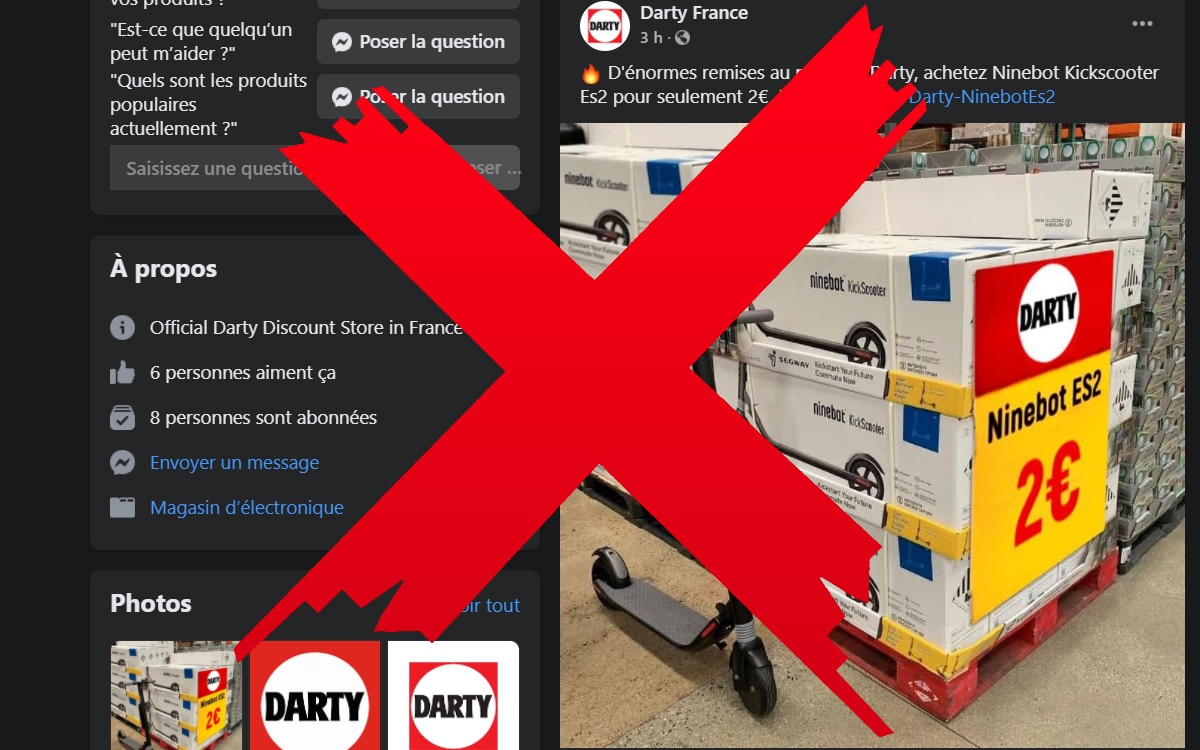 If you currently see an advertisement on Facebook offering a Segway electric scooter for 2 €, do not click on it: it is a phishing attempt to recover your bank details.

A few months ago, a phishing attempt already doing his own on Facebook. While we believed it disappeared, here it is coming back in force. And in the meantime, its authors have taken care to refine their techniques.

The scam attempt in question is to trick users into believing that they can afford an electric scooter for € 1.99 or € 2, a model usually sold between 400 and 500 euros on merchant sites. Whether we receive it or not, the amount committed is so low that we say to ourselves that we ultimately have not much to lose. Especially since seeing the avalanche of positive comments that punctuate this advertisement, there is something to be softened.

Darty Would he really have a surplus of scooters in stock that the brand would like to get rid of at very low prices? Because here is what we can read for a few days on Facebook: “Due to the Darty & Segway partnership, we have decided to give you the possibility of obtaining a Ninebot ES2 scooter for € 1.99! Answer a few questions for a chance to win. ”

The message in question is followed bya photo showing boxes of scooters stacked and accompanied by a huge sticker actually displaying a price from € 1.99. Here is a golden business, the price of which does not even correspond to the shipping costs. 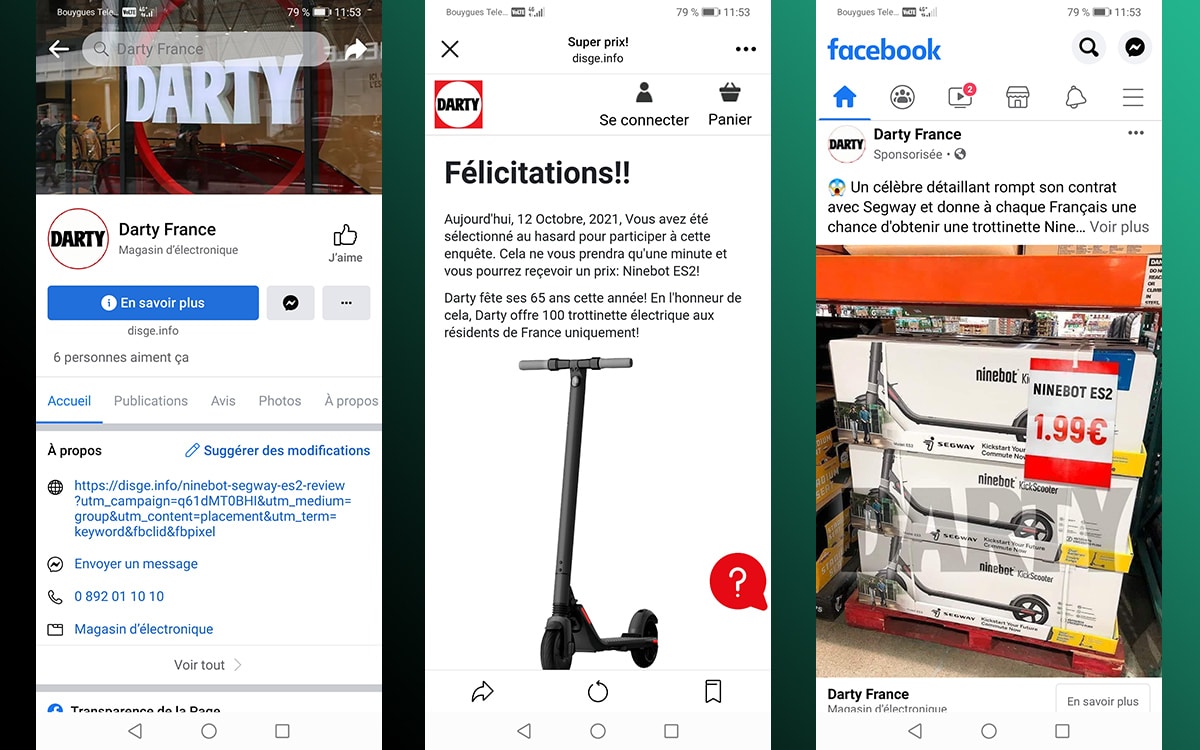 The hackers who developed this deception have worked their ad to the smallest detail. In the Facebook ad, almost all comments are positive. Admittedly, some users pretend to question the validity of this advertisement: “I thought it was a kind of deception”. But two lines later, they explained that they had received the goods in less than two days, with supporting photos.

To read also: Facebook – the gendarmes call for caution with the “video” scam

As soon as a user tries to ask any question, it gets a terse answer from various user accounts. They explain to him that all this is true, by posting another photo of the scooter indoors or outdoors, with or without its new owner by his side … In short, in all imaginable situations, just to deceive as many users as possible. . In addition, the credibility of the message is supported by over 400 positive feedback (like, heart and laughing face) from other Facebook users. False accounts, of course, or Internet users paid for it.

We also wanted to “try our luck” by playing the game. After having clicked on the link of the Facebook page, we arrive on a page of competition as there are thousands on the Web. We must then answer a first question: do we live in France? Then a second question: how much time do we spend on the road? Third question: do we trust Darty products? A little game then follows, which invites the user to click on one of the 12 gift boxes on the screen. The 1st and 2nd attempts are systematically unsuccessful. As the capture below shows, the 3rd attempt is a good one, how lucky we are! 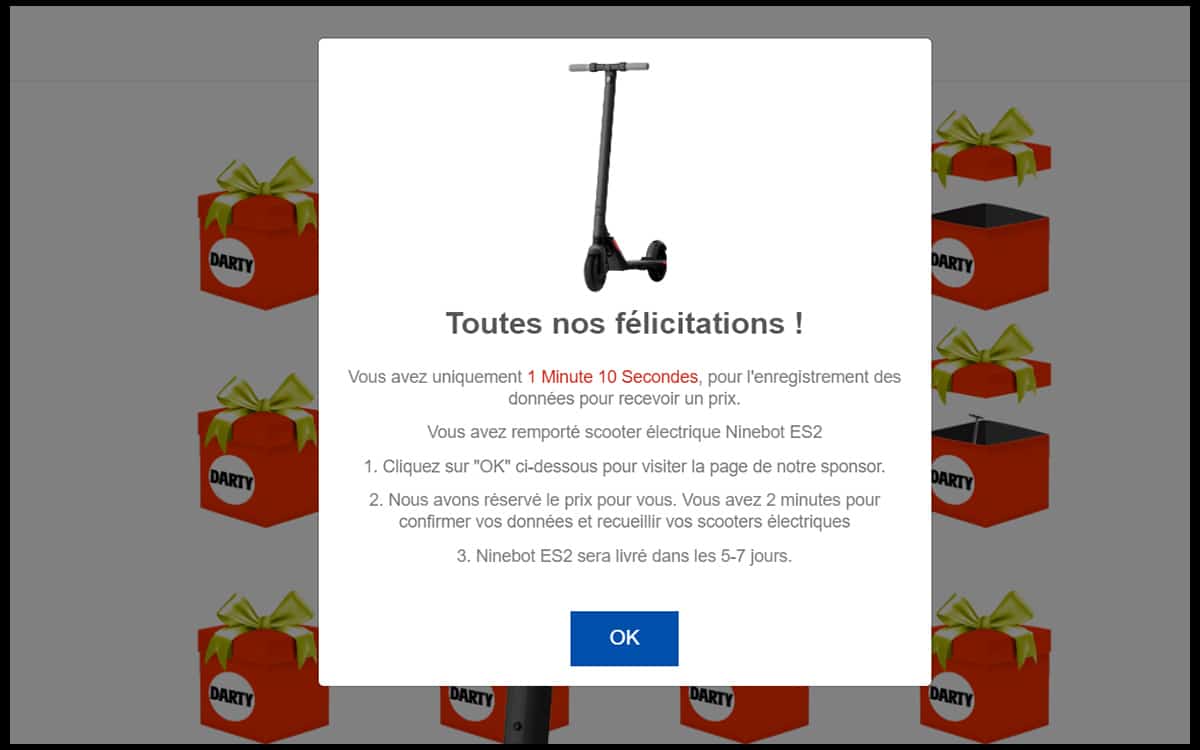 The operation only lasted a handful of seconds. We would almost get caught up in the game, but all this is obviously a scam. Because at the end of the road, the site asks for various personal information (name, first name, address, telephone number…) and especially the bank details intended to withdraw the famous 2 euros. You will understand, all this with the aim of stealing all this information and carrying out various bank withdrawals from the victim. Enough to empty her entire account before she notices anything.

Facebook has yet to remove the fake Darty pages

The Facebook pages in question are called Darty France Where Darty Promo. They do not hesitate to use the logo of the sign to give credibility to their misdeed, as well as a photo of a store and even an after-sales service number that belongs to Darty. We spotted them two days ago, reported them to Facebook, but they are still accessible for now. In its defense, the social network is overwhelmed by this type of scam. Until recently, it was fake Decathlon gift cards worth 1000 € circulating on the social network. The trouble is that in this case, the attempted fraud is also part of the sponsored content present on Facebook, which therefore does not check the legitimacy of newly created Darty pages. 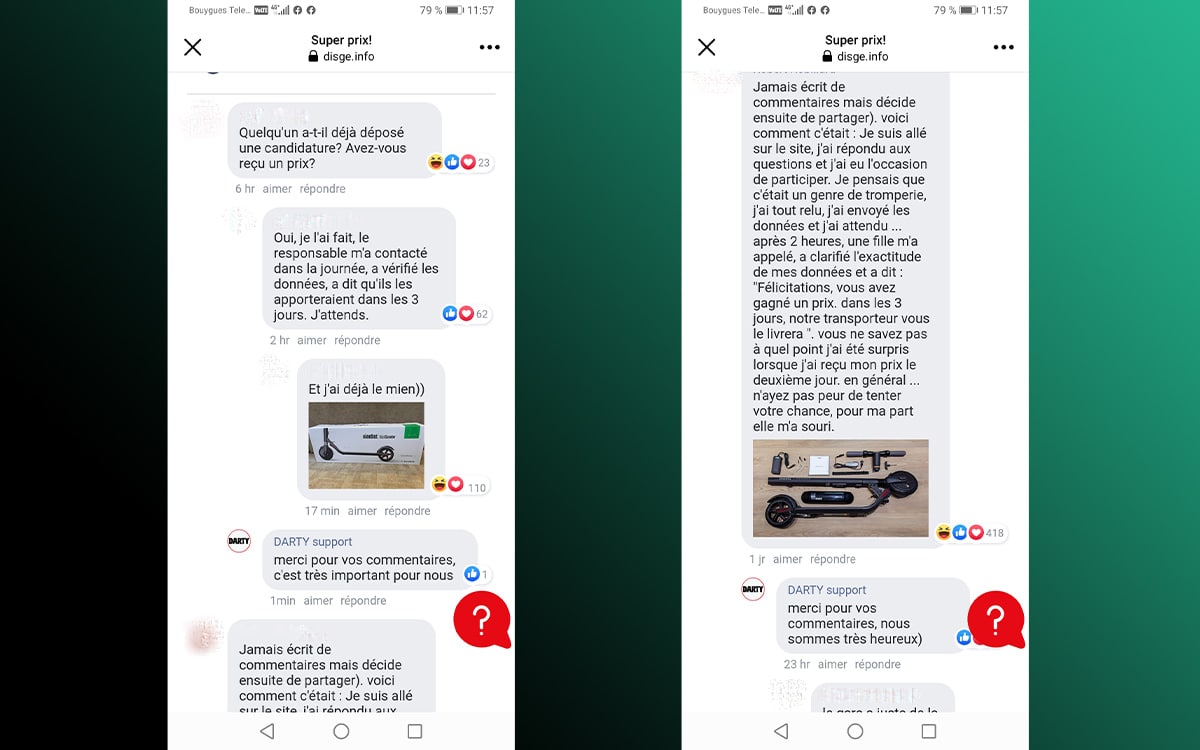 We’ve reached out to the brand about these scammers posing as the well-known chain store, and are awaiting a response at this time. We will of course keep you informed of the development of the situation. But even if Darty would quickly delete these fake accounts, there is no doubt that they will resurface sooner or later on another page of the social network.