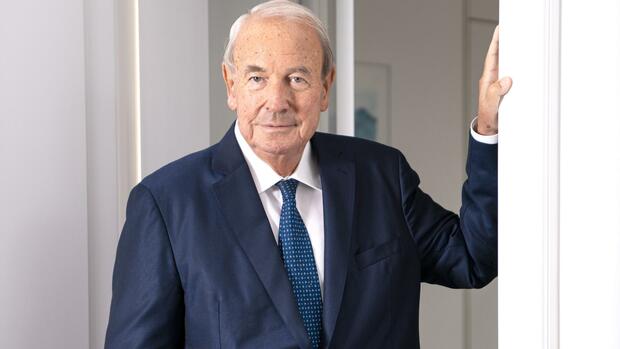 Frankfurt, Dusseldorf The unrest before the all-important Lufthansa general meeting this Thursday is growing every hour. The thin hope that a conversation with the Federal Minister of Finance and the Federal Minister of Economics could at least bring a little more clarity to what Munich entrepreneur Heinz Hermann Thiele is up to, shattered Monday afternoon. The 79-year-old’s plan remains a mystery.

Thiele holds 15.52 percent of the share capital of Lufthansa AG. The entrepreneur had criticized the rescue package with a volume of nine billion euros. He is bothered by the fact that the federal government only pays EUR 2.56 per share when he joins Lufthansa. The stock currently costs almost ten euros. He also fears that the state’s two seats on the board could make restructuring measures more difficult.

The federal government supports Lufthansa on the one hand with a loan from the state bank KfW in the amount of three billion euros. In addition, there is a silent contribution of 5.7 billion euros. Part of this can be converted into shares – if there is a hostile takeover of the airline or if the company does not pay agreed repayments. Together with the direct stake of 20 percent, the federal government could increase its Lufthansa shares to up to 30 percent in the future.

Since the Annual General Meeting – the shareholders there have the last word in the rescue – only takes place virtually due to the corona pandemic, the share presence has already been determined. Less than 38 percent of the share capital will be present. With his share, Thiele can prevent the required two-thirds majority.

The consequences would be dramatic. The capital requirement required for the solvency cannot be met on the capital market or through other forms of external financing, according to the invitation to the shareholders’ meeting. “Without the stabilization measures, the board believes that bankruptcy is inevitable, and if the stabilization measures cannot be implemented, the board will try to apply for a so-called protective shield procedure.”

High reputation damage in the event of bankruptcy

The reputation damage would be huge – even for Thiele. His name would be linked to the bankruptcy of proud Lufthansa. The question that only Thiele can answer is: is the disputable entrepreneur willing to take the risk? For the overarching goal of taking power at Lufthansa, which he so valued?

Representatives of small shareholders do not rule this out. “One scenario is bankruptcy, in which Mr. Thiele can capitalize the company and subsequently convert these loans into shares,” says Marc Tüngler, chief executive of the German Protection Association for Security Ownership (DSW): “Mr. Thiele is not the White Knight for Lufthansa.” If he wanted to be the savior, he should have put his cards on the table long ago – also to look for allies among the small shareholders, says Tüngler.

Lufthansa management wants to prevent bankruptcy by any means.

In fact, bankruptcy offers the opportunity to radically restructure the Lufthansa Group. In the end, there could be a significantly smaller airline, but it is much more efficient. A look at the USA shows what is possible. Almost all major airlines there have gone through the so-called Chapter 11 procedure – creditor protection, which is the model for the German protective shield procedure.

Today the four airlines are stronger than ever and have divided the US market among themselves. That could be the scenario Thiele is relying on. The risk that faces this is the total loss for the shareholders if the reorganization does not work.

In addition: Thiele has only limited alternative options if he wants to achieve his goal – if it is taking over power at Lufthansa. He can hardly intervene actively at the Annual General Meeting. “The General Meeting cannot decide on things that are not on the agenda,” says equity lawyer Manuel Lorenz, partner in the major law firm Baker McKenzie. “And it is too late to add to the agenda.” In addition, the Annual General Meeting held online is likely to make interaction with other shareholders more difficult.

Thiele could, however, abstain and then take legal action against the decision. Abstentions were not counted among the votes cast, said Lorenz. “If he abstains, he can still file an objection and then challenge the decision in court. The objection must be raised via an online service during the Annual General Meeting. “

Thiele could also request a special audit and refuse to discharge the board. But the rescue package would not stop that, experts believe. Therefore, abstaining will be of little use in the end, Tüngler is convinced by the DSW.

Stock corporation lawyer Lorenz also sees little effective leverage for a legal review of the rescue plan. Even the enormous preferential price of the shares, which the federal government receives, is difficult to attack. Because the Economic Stabilization Acceleration Act stipulates that an exclusion of subscription rights is permissible and appropriate.

Lufthansa could try to enforce the rescue plan in court

Lufthansa argues similarly in its invitation. In addition, it says: “The exclusion of subscription rights is also proportional, since in a specific case the company’s interest is valued higher than the interest of the shareholders in maintaining their legal position.” The federal government’s entry is also a condition for the entire aid package. “It is therefore not easy to break out of the € 2.56 capital increase from the package,” says lawyer Lorenz.

If in doubt, Lufthansa could try to legally enforce the restructuring plan. The so-called Girmis judgment of the Federal Court of Justice from 1995 could serve as a model here. The textile company from Grefrath in the Lower Rhine region was in economic difficulties at the time.

The management had drawn up a restructuring plan in which the creditors were to convert loans into equity and the shareholders were to approve a substantial capital cut. A group of shareholders around Bolko Hoffmann, publisher of the stock exchange magazine “Effecten-Spiegel”, voted against.

The BGH clarified that there is a certain duty of loyalty on the part of shareholders in such cases. The individual shareholder was not allowed to prevent a sensible and mostly aimed restructuring of the company for selfish reasons. “Mr. Thiele does not move in a legal space. His legal options to take action against the rescue package after the Annual General Meeting are therefore limited, ”says Tüngler from DSW, referring to the Girmis case.

Stock corporation lawyers therefore believe it is more likely that Thiele will try to conclude so-called sideletter in advance of the general meeting. In these, he could be assured that the federal government would not intervene in business matters. It would also be conceivable that he would get the promise to take over shares in the federal government. It is contractually stipulated that the state – if certain conditions are met – will surrender its shares again by the end of 2023.

The extremely complex situation also weighs on the discussions with the employee representatives about the contribution of the employees to the rescue. The cabin union UFO reported on Tuesday afternoon that a basic agreement had been reached with the management during the night, which should combine significant savings measures with four years of employment protection. But the package still has to be written down.

In the current dynamic, it is incredibly difficult for both the union and Lufthansa to make any commitments, said UFO managing director Nicoley Baublies. The announcement made by Lufthansa to close the SunExpress Germany branch, a joint venture with Turkish Airlines, shows how uncertain employment commitments are at present. 1200 employees are affected, for whom alternatives are now to be sought.