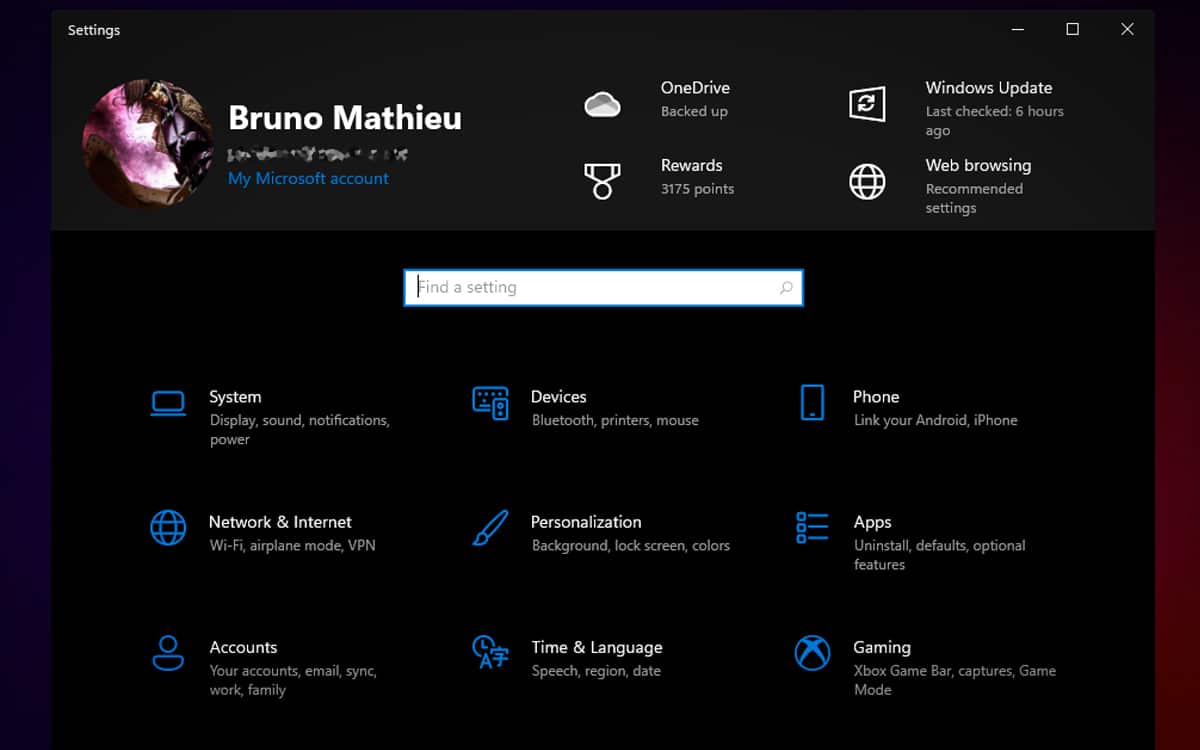 Windows 11 is finally here, and with the new version, we discover that Microsoft has finally decided to clean up the various interfaces of the control panel. Everything is now centralized in a new more comprehensive, intuitive and elegant Settings app. Unfortunately, there are still some traces of the old control panels.

The first Preview of Windows 11 is finally available, which allowed us, within the editorial staff, to take a first look at the owner of the new version. Besides the design, which we have already known for some time, one of the first things that struck us was the complete overhaul of the (or rather “of”) Control Panel in the Settings application.

Until Windows 10, in fact, Microsoft added new interfaces of the control panel supposed to be clearer. But in doing so, the firm had created a real mess, which often resulted in an obvious lack of intuitiveness. Certain network settings, for example, required going to display, via successive deep links, interfaces inherited from Windows 7 and earlier versions of Windows.

Windows 11 cleans up its settings

Despite the passage of Windows to the update mode known as “Software as a Service” (SaaS) and the fact that Microsoft had announced that Windows 10 would be “the last version of Windows”, the publisher had so far never really done much against this baroque situation, to the chagrin of users. Windows 11, by contrast, marks a real break with a system where questions of ergonomics, aesthetics and intuitiveness finally come to the fore.

One of the most beautiful incarnations of this new mantra is the new app Settings, which we were able to test. Now, an application centralizes everything, and allows you to change all the parameters you need, much more quickly and simply. We note, however, that the old interfaces have not yet completely disappeared. Some additional settings still need to be used. 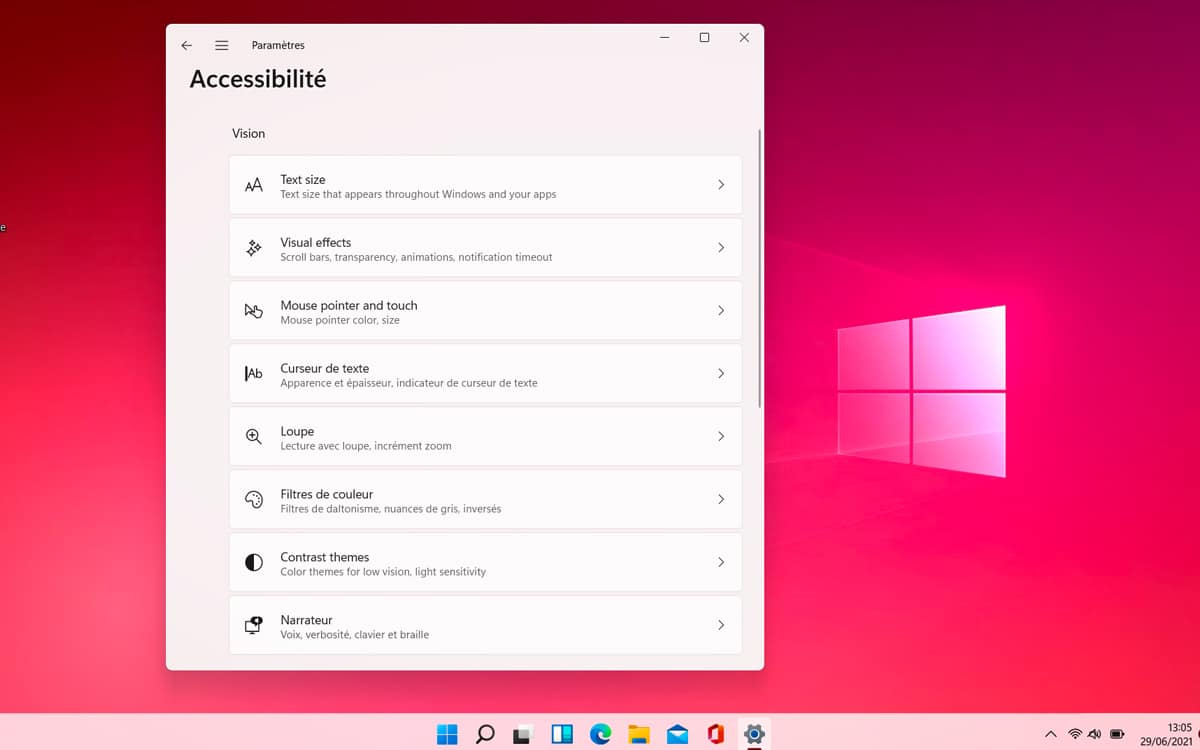 It’s a bit of a shame, but we won’t be very severe: Windows 11 is still in the “Preview” beta phase and it is likely that Microsoft will improve the situation by the final version (at least we hope so).

As you can see, nothing clashes, everything keeps the same sleek and elegant feel. When you click on an option in the first screen, the organization of the window changes, with the different aspects to be configured in a column on the left, and the parameters to be modified on the right. Each of the different options in the left column now comes with a icon that makes it easier to find them. 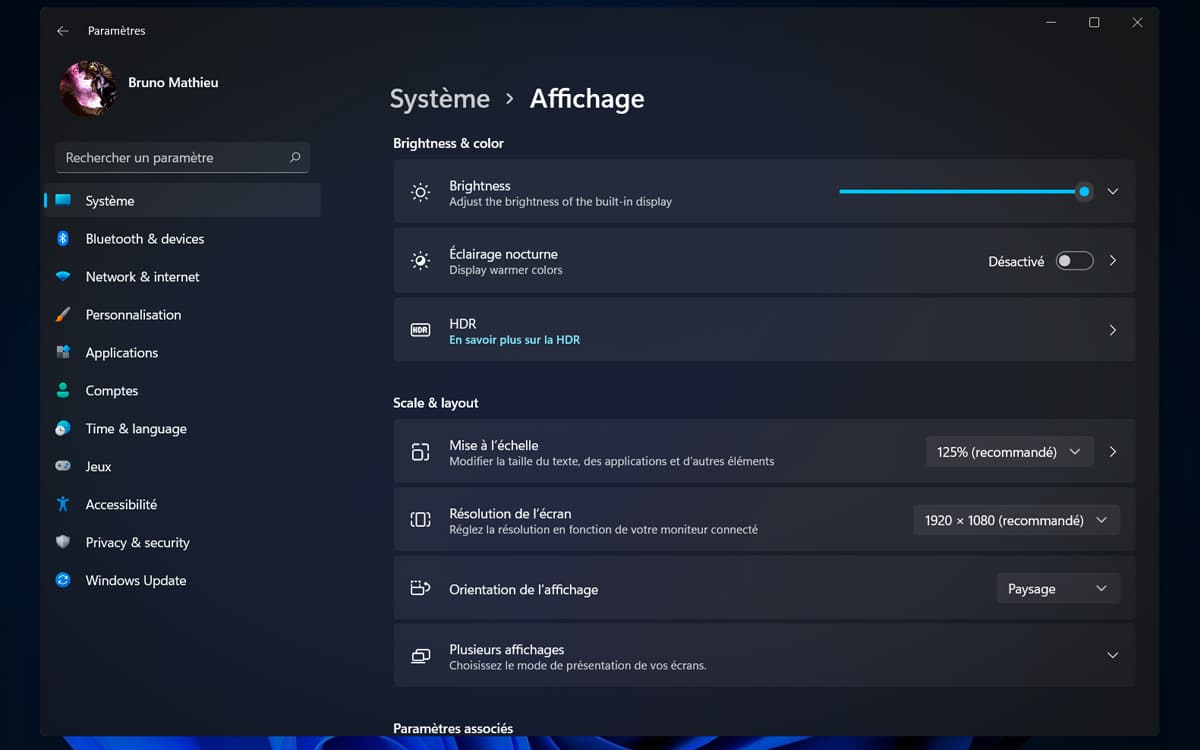 A field of instant search allows you to find the right setting even faster, just by typing a few letters. This menu remains displayed for practically all the settings, with the exception of the accessibility panel and the new system themes panel, which can be accessed via a setting. 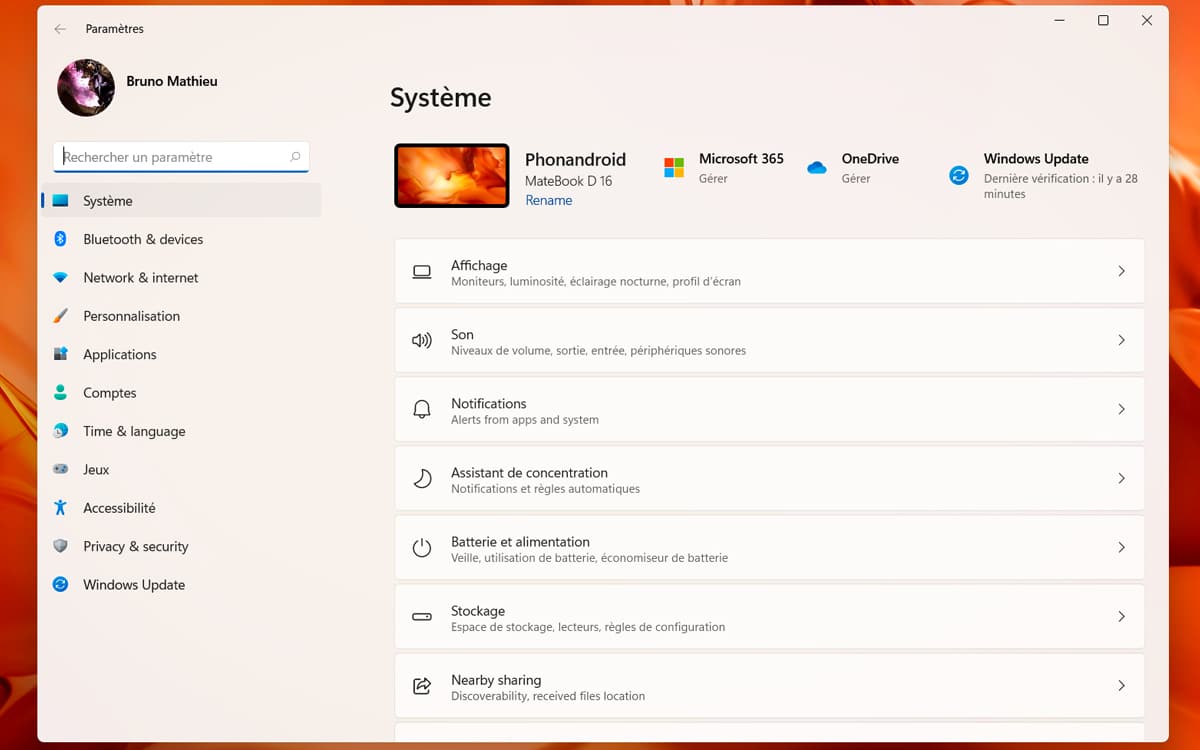 You will undoubtedly have noticed, moreover, a leitmotif : when each major setting is displayed, the right panel is in two parts. At the top there is a “header” with general information, and quicker access to the most common settings. The lower part is presented in the form of a list with the different points that the user can configure. 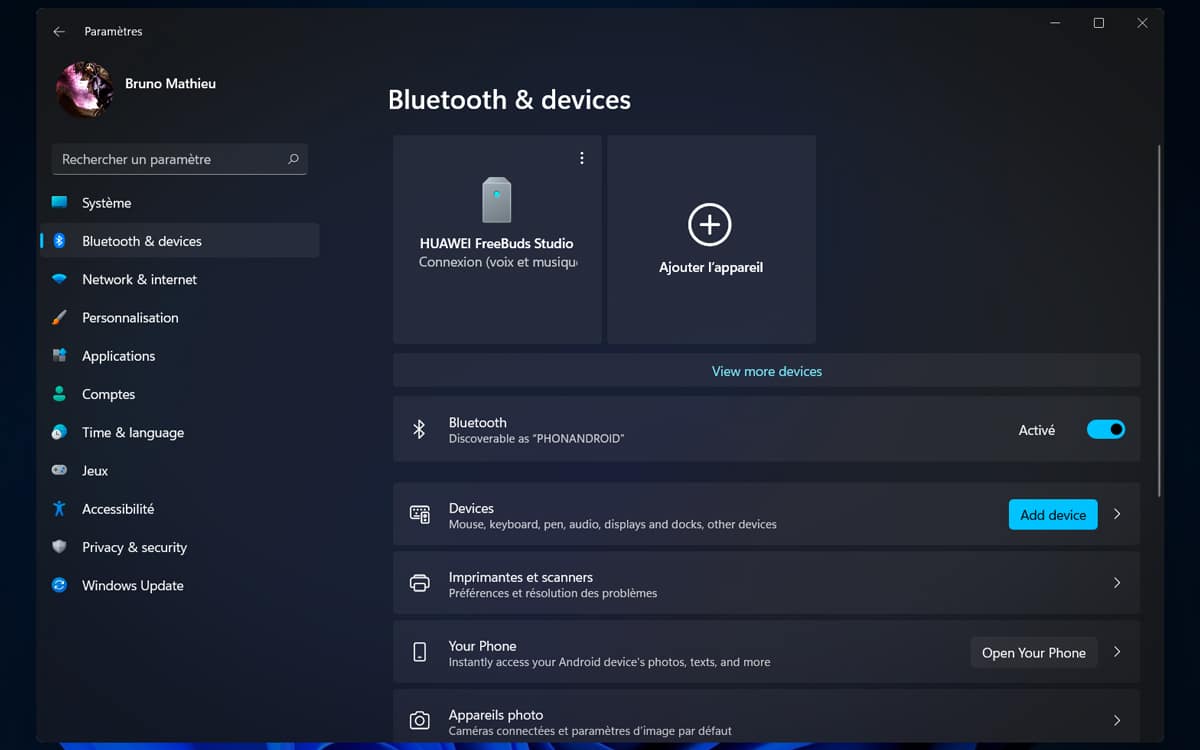 We do not yet find this two-part design in all sections, but it is in any case what we see among others in System, Windows Update, Personalization and Network & Internet. By the way, Microsoft is pushing further what can be done via the Settings application. For example, in Windows Update, it becomes possible to see how long the restart and the installation of updates will take. 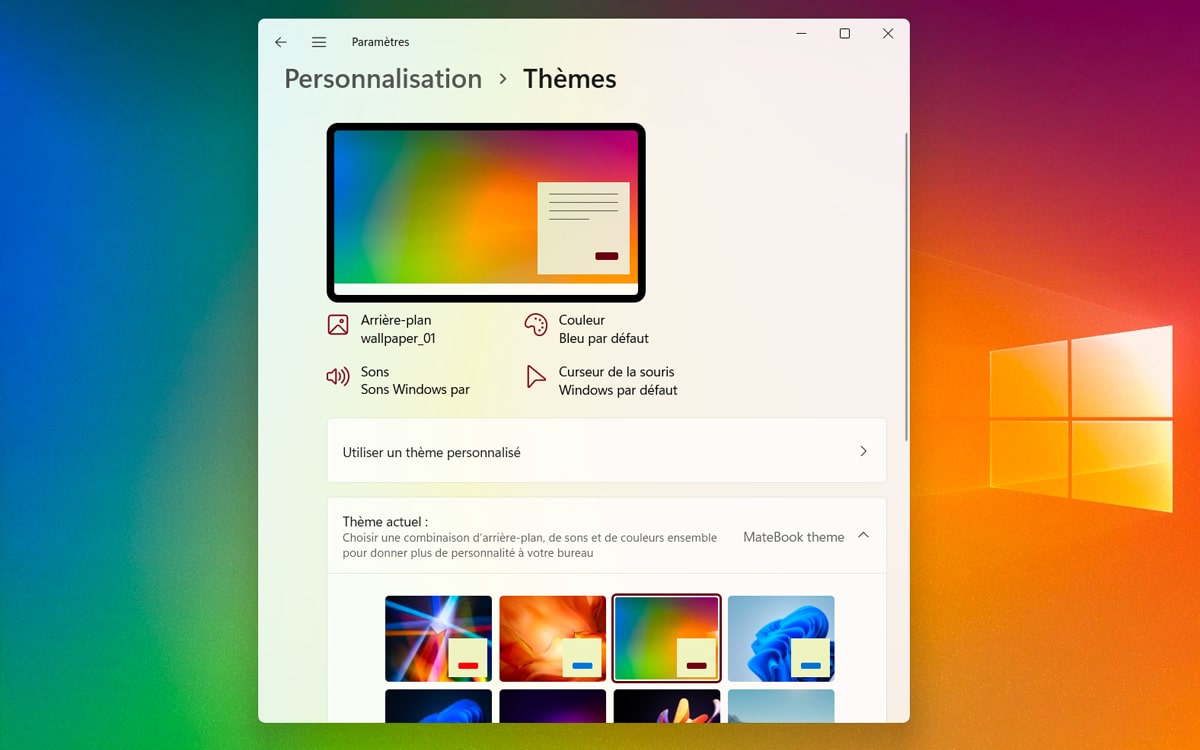 The Personalization panel is new. It makes it easier to switch from one theme to another. Users with a touchscreen keyboard can use this menu to customize the keyboard with a wallpaper. It is also possible to change the size and color of the keys as you wish. 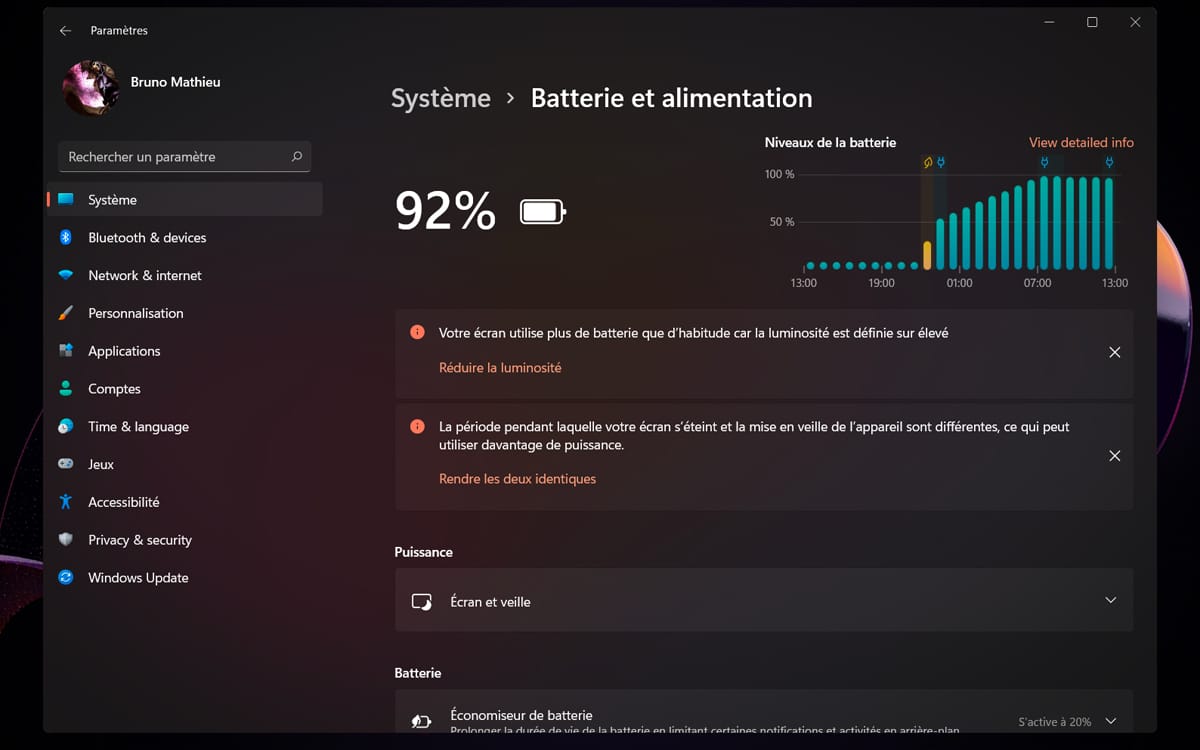 Also read: Windows 11 – after the confusion, Microsoft specifies the minimum requirements to install the OS

Generally all these changes are welcome even if we are a little worried to see that the old control panel still subsists in Windows 11. Hopefully, like the French translation which is not yet fully completed, this point will finally be definitely resolved with the final version of Windows 11.