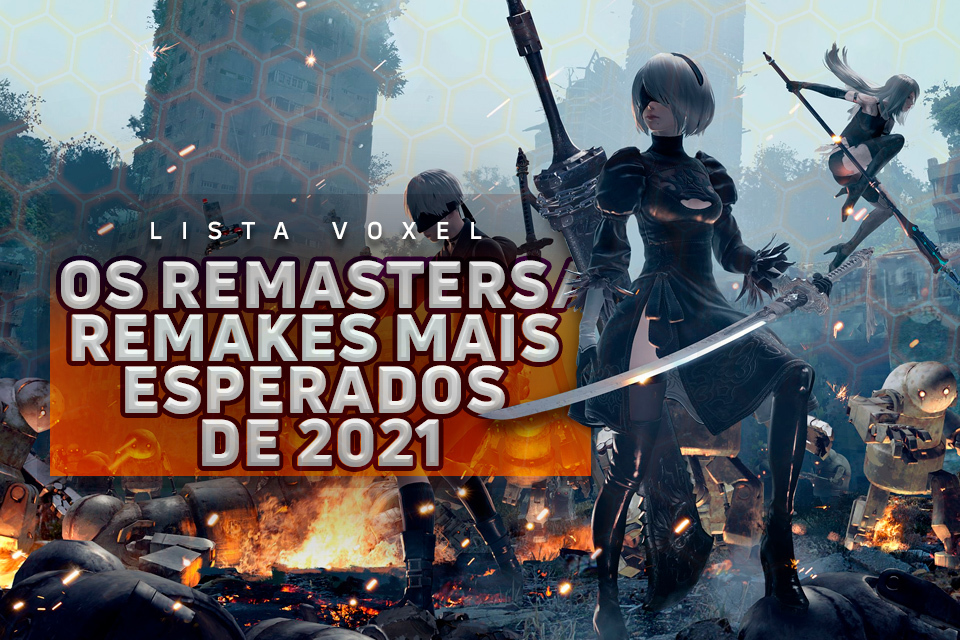 Every beginning of the year, we look forward to the new titles that will be released. New IPs and sequels are always at the top of the most anticipated games, but sometimes the return of old school also draws attention.

Last year, the remake of Final Fantasy VII won old and new hearts, and there is no doubt that other games will do the same this year. So we made this list with the most anticipated remakes and remasters of 2021.

Nothing better than paying for a remaster and receiving two, isn’t it? Saviors of Sapphire Wings & Stranger of Sword City: Revisited will bring two titles from the RPG franchise Dungeon Crawlers in a unique collection that will hit PCs and Switch on March 16.

Prince of Persia: The Sands of Time Remake [18 de Março]

Ten years have passed since the last game of the franchise Prince of Persia. With the focus of Ubisoft becoming the series Assassins Creed, the story of the nameless prince has stalled. Here’s the French developer made an announcement that warms the hearts of fans: Prince of Persia: The Sands of Time would receive a remake.

This new version, which will arrive on March 18 (after its postponement), will bring redesigned visuals, modernized controls, new cinematic sequences and improvements in the voices, sounds, parkour animations and soundtrack, in addition to surprises bonuses.

NieR: Automata, launched in 2017, was very successful among oriental players and made its noise here in the west. With that, Square Enix decided to pay attention to the series, placing Toylogic in charge of carrying out a remaster of NieR Replicant, launched in 2010.

This version full of numbers is more than a common re-release, as it will bring new songs, a dub rework and even an update to the combat system made by Platinum’s Takahisa Taura. The game will be available on April 23.

Released in 1999 for the Nintendo 64, Shadow Man it wasn’t exactly a success, but the game lightly inspired by a comic of the same name brought together a good fan base over the years, when Nightdive Studios decided to give the game a makeover.

The version will be released for PC, Xbox One, PS4 and Switch and will bring new resolutions, content cut from the original, responsive controls, updated artificial intelligence, improvements in gameplay and remastered soundtrack. The launch promise will be earlier this year, so let’s wait.

It is not a complete novelty, since it was launched in Japan in October last year, but will reach the West between March and May. JRPG fans, make a note of your diaries.

The Stanley Parable it was a mod Half-Life 2 which was very successful in 2011, bringing simple gameplay and an incredible and unique interaction with the narrator of the title. Ten years after its original release, the game will receive an ultra deluxe version with all the original content and more.

The game will also reach the consoles, we just don’t know which ones yet. Since there is no certain release date, it remains to wait and hope, as the title has already been postponed twice, changing from 2019 to 2020 and from 2020 to 2021.

System Shock it was a franchise that was born in the 1990s and looked very promising, mixing RPG with hacking and terror, but ended up not going forward after its second game. The developer Nightdive Studios, specializing in buying rights to old games and making them compatible with current PCs and the same Shadow Man Returns, then opened a crowdfunding to re-launch the first game and the idea worked very well.

Raising nearly $ 1.5 million, the studio has several industry veterans and is working closely with the game’s original developers to bring a faithful and up-to-date experience to fans of the franchise.

PC, Xbox One, PS4 and Switch

Kingpin: Life of Crime it was not a very popular game, but it ended up being very controversial. It was not only extremely graphic and violent, it was released a few months after the Columbine tragedy. Over the years, he became a cult among some players and 3D Realms took advantage of this to close a partnership with Interplay Entertainment and launch a remastered version of the game, called Kingpin: Reloaded.

Using the Quake II, the game features 4K resolution, ultrawide support and improved controls and visuals. To avoid controversies that may arise, there is a mode called No Violence.

No doubt, Braid it was one of the most important games for the indie scene of this century. Considered already a classic, it impressed players with its visuals, its history and its creative gameplay mechanics. After 13 years, the game designed by Jonathan Blow will receive a remastered version with many improvements and new features.

Higher resolutions, reimagined areas, animated background as if it were a painting being made in real time, 9 times more pixels than the original title, new animations, improved music and sounds and several hours of comments from developers ranging from history to programming. The title has no release date yet, but it will arrive later this year for almost all platforms on the market.

Which game are you most excited to play? Are there any that you want, but that didn’t appear here? Leave it in the comments.