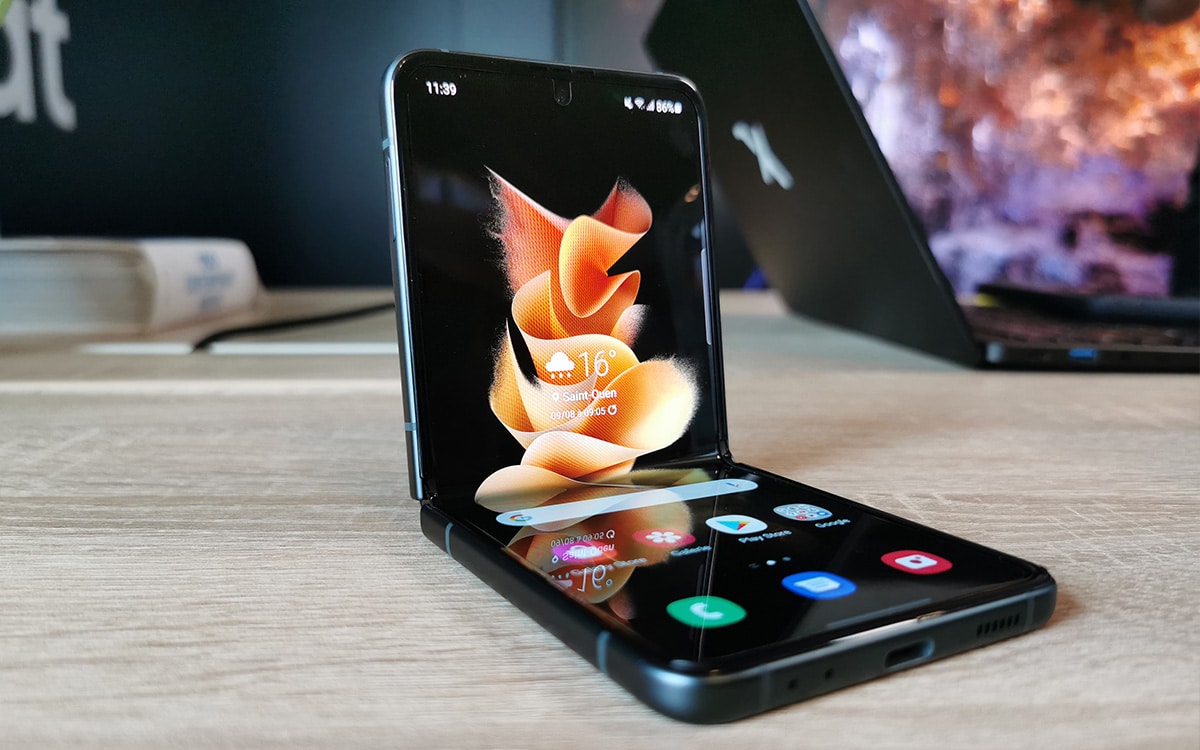 After months of rumors (mostly true), Samsung has finally made its new folding smartphone official: the Galaxy Z Flip 3. We were able to take control of the device and give you our first impressions, while of course waiting for a full test.

Look no further: if Samsung released in 2020 a first Galaxy Z Flip, then a 5G version of the same smartphone, there never was a Galaxy Z Flip 2. The South Korean manufacturer went directly to Z Flip 3 to match the numbering of its other foldable smartphone, the Galaxy Z Fold 3. And since the two devices are released at the same time, it was simpler and more logical for Samsung to attribute to them the same version number.

If the Z Flip first of the name had really seduced us, this Android smartphone nevertheless showed some annoying flaws. The small size of its external screen made it difficult to consult the messages. In addition, Samsung had not planned no real tightness for his smartphone, while his high price made it one of the most expensive devices on the market, placing it ahead of the high-end models of the brand or those of competitors. In short, the Z Flip was innovative and had enormous potential, but it suffered from major drawbacks. 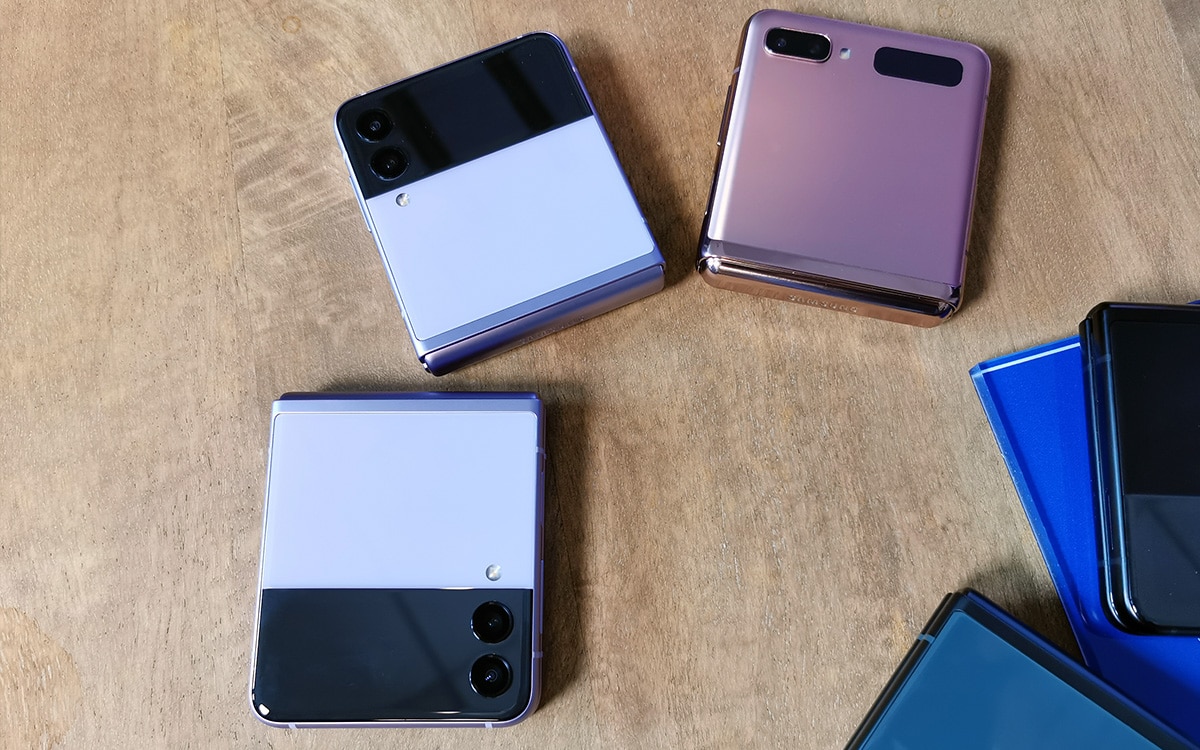 But Samsung has not said its last word on the foldable market and continues to develop its range. Thus landed the Galaxy Z Flip 3, a smartphone that takes almost all the strengths of the previous model. The good news is that almost all the faults that we had been able to emit with regard to the first model have been erased. The smartphone takes advantage ofan IP X8 certification and now hasa “real” touch screen on the front. But above all, his price has been widely revised downwards. And by the way, Samsung took the opportunity to rejuvenate the device’s SoC and offer it the most powerful processor of the moment, a Snapdragon 888. As for the bad news, well… There is none! At least not for the moment.

We had the opportunity to take control of the smartphone during a session organized by Samsung at its headquarters near Paris. Of course, there is not enough to offer you a full review of the Galaxy Z Flip 3. But rest assured, it is coming very very soon. so here’s our first impressions of the Galaxy Z Flip 3, which finally has all the assets in hand to become one of the best Android smartphones of the year. 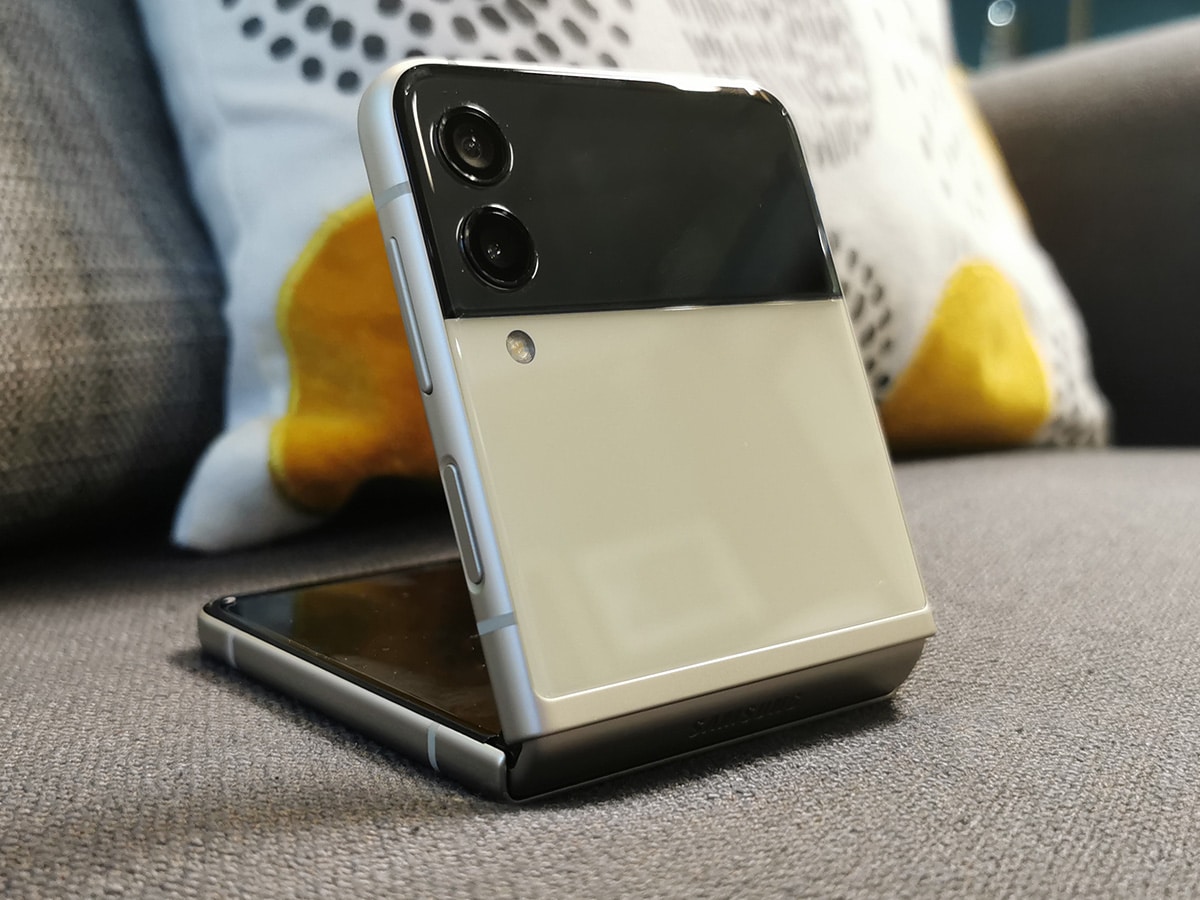 At first glance, the design of the device has changed very slightly, without however marking a fundamental departure from the first version. The Z Flip 3 still comes in the form of a small smartphone with square shapes and opens like a compact. If it evokes by its opening system the old flip phones 2000s, the comparison stops there. The Z Flip 3 is a true concentrate of technology that should delight those looking for a hyper compact smartphone, that is to say that fits in a small pocket of pants, or that will always find a small place in a yet well stocked bag.

As we can see in the photo above, the space between the two parts of the smartphone is indeed present. This was already the case on the previous version. The manufacturer also announces an increased resistance of the screen of around 80% compared to the previous generation. But if you have to carry it regularly with other objects, it may be preferable to insert it in a small protective pouch, in order to prevent another object from getting lodged between the two parts of the screen. . For the rest, it is aesthetically flawless: the smartphone is super light, its rounded edges give it a very good grip, and it can easily be opened with one hand. 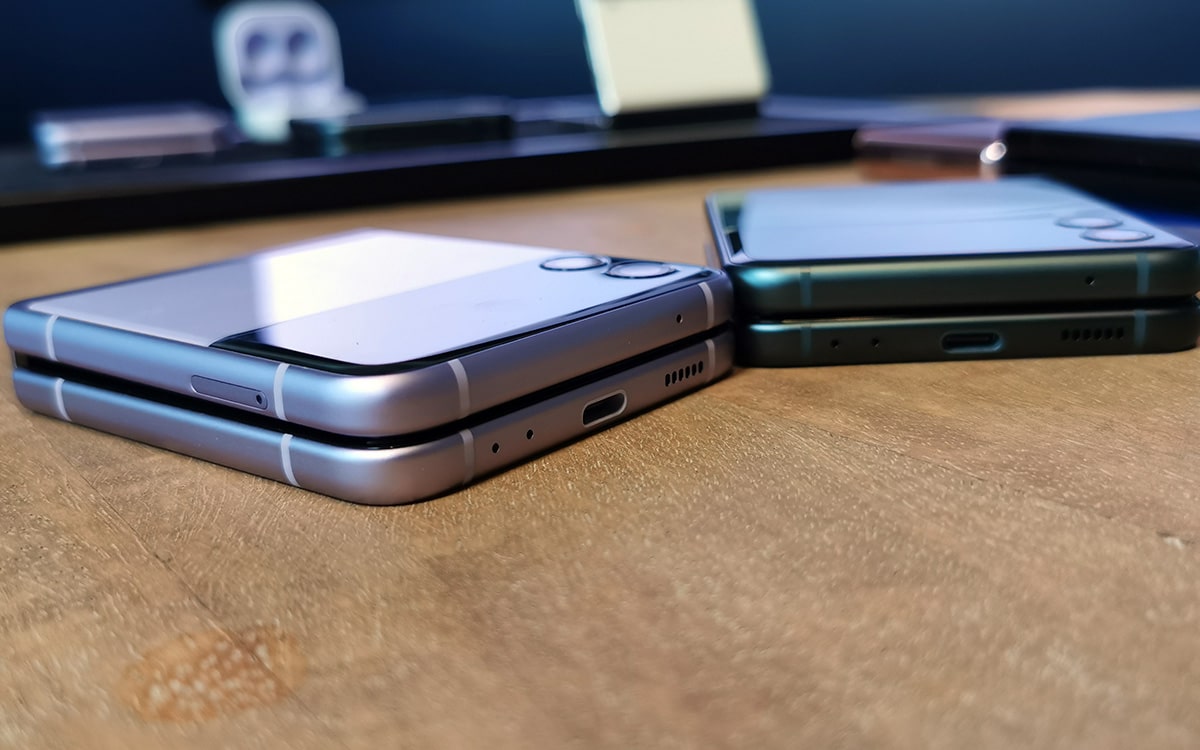 On the front (when the phone is still folded), from the first seconds, it’s impossible not to notice this large black band that covers the front of the smartphone. This is the screen that allows you to view and control the device when it is closed. This screen promises to be 4 times larger than on the previous generation, sinceit is now 1.9 ″ and offers a definition of 260 x 512 pixels at 302 ppi (against 1.1 ″ for the first Z Flip).

Thanks to this screen, you can read all of your notifications at a glance, pay with Samsung Pay, or control music playback using Spotify (we were unable to test this option using other services like Deezer when we get started, we will tell you more as soon as possible). These are just a few examples of use, but this increase in surface area is a game-changer. This time, the external screen is really useful. 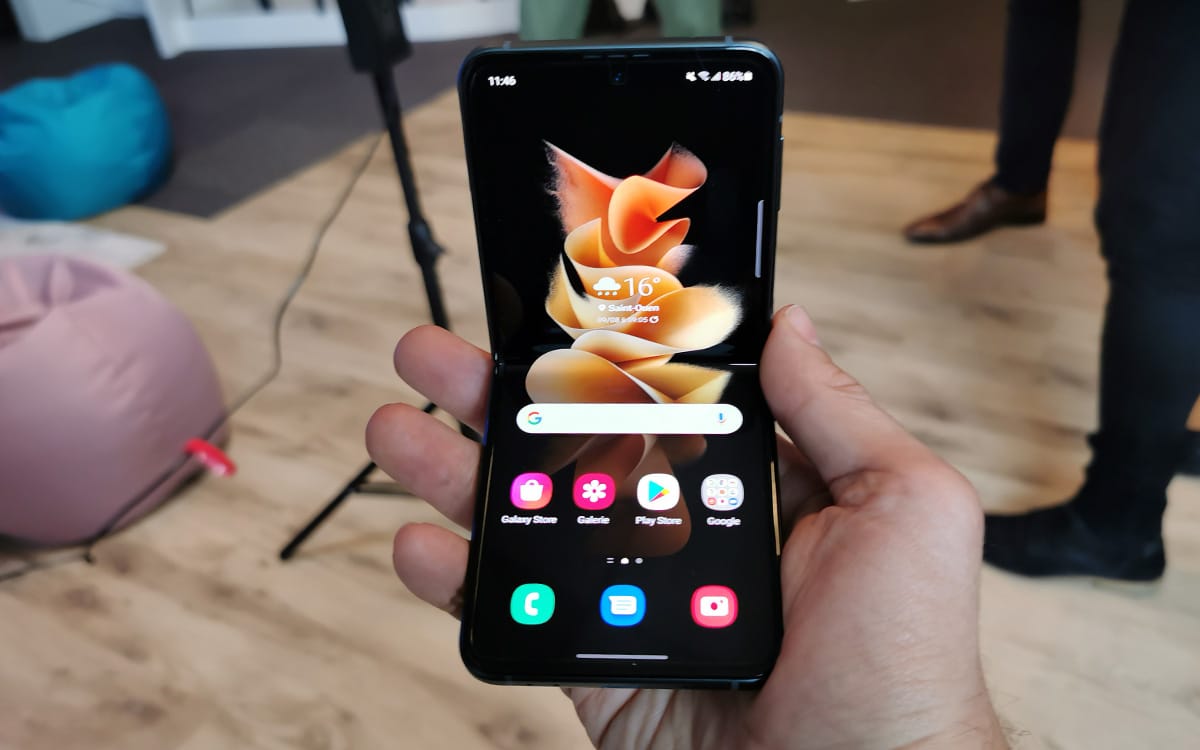 A folding phone that has answers

The Z Flip 3 is a smartphone that has it all. So far is it resistant? Samsung claims the device can open and close over 200,000 times without showing any sign of weakness. But among the novelties facing the older generation, we find above all a IP X8 certification. Clearly, the device is able to withstand immersion at 1.50 meters for 30 minutes. A first for a foldable smartphone. 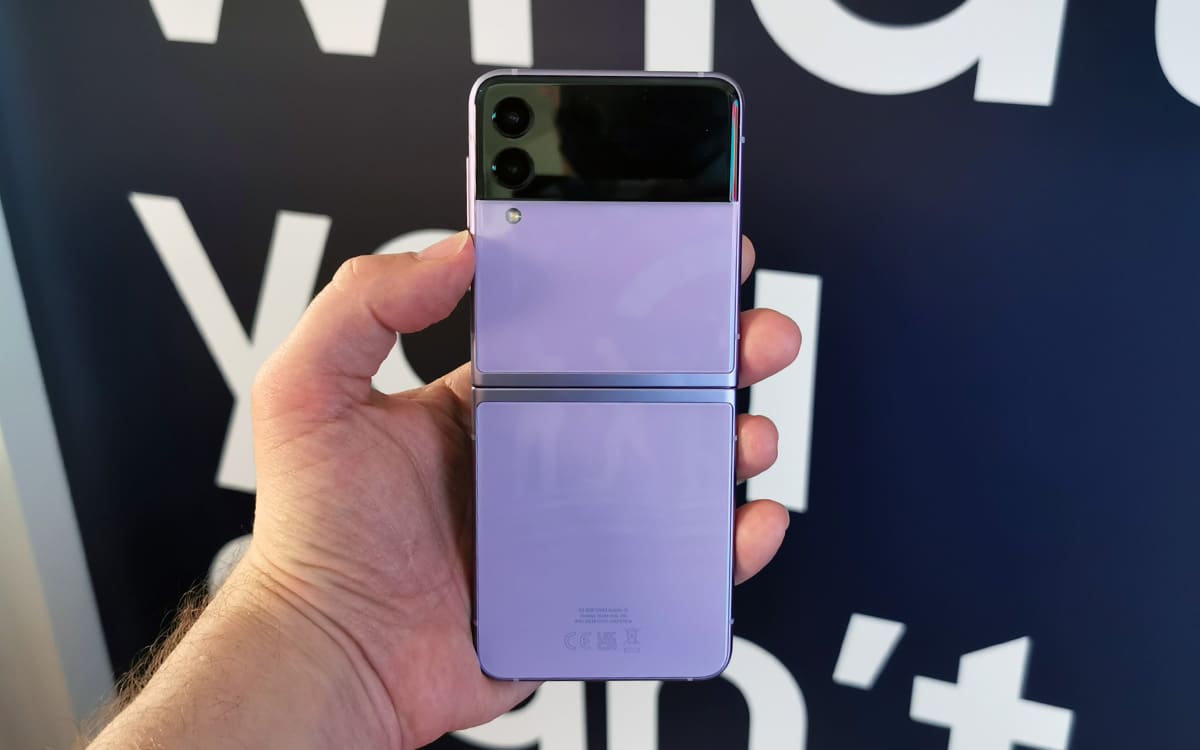 Once the smartphone is fully open, the “fold” of the screen is almost invisible. On the other hand, it feels to the touch, a bit as if there is a very small “bump” in the road. Your vehicle (your finger in this case) will roll without a problem, but you will feel a slight difference when you pass over it. In use, just like on the 1er Z Flip, this is absolutely nothing to worry about and will only disturb the most capricious. In reality, when you are in front of the screen and you consult a web page, that you study a document, that you look at photos or videos, you absolutely do not notice it.

The device benefits from a 6.7 ″ main display in FHD + (2640 x 1080 pixels / 425 ppi). And unlike the first Z Flip of the name, this time it benefits from120 Hz refresh rate, which gives it excellent scrolling fluidity, whether on the Web or in video games that support this technology. It remains to be seen whether 120 Hz is not too energy intensive in this case. Certainly, Samsung is starting to master “adaptive” technology, which consists of changing the refresh rate on the fly depending on the running application. But the autonomy of the Galaxy S21, which also benefit from a 120 Hz refresh, does not yet match that of a competitor like the Xiaomi Mi 11. 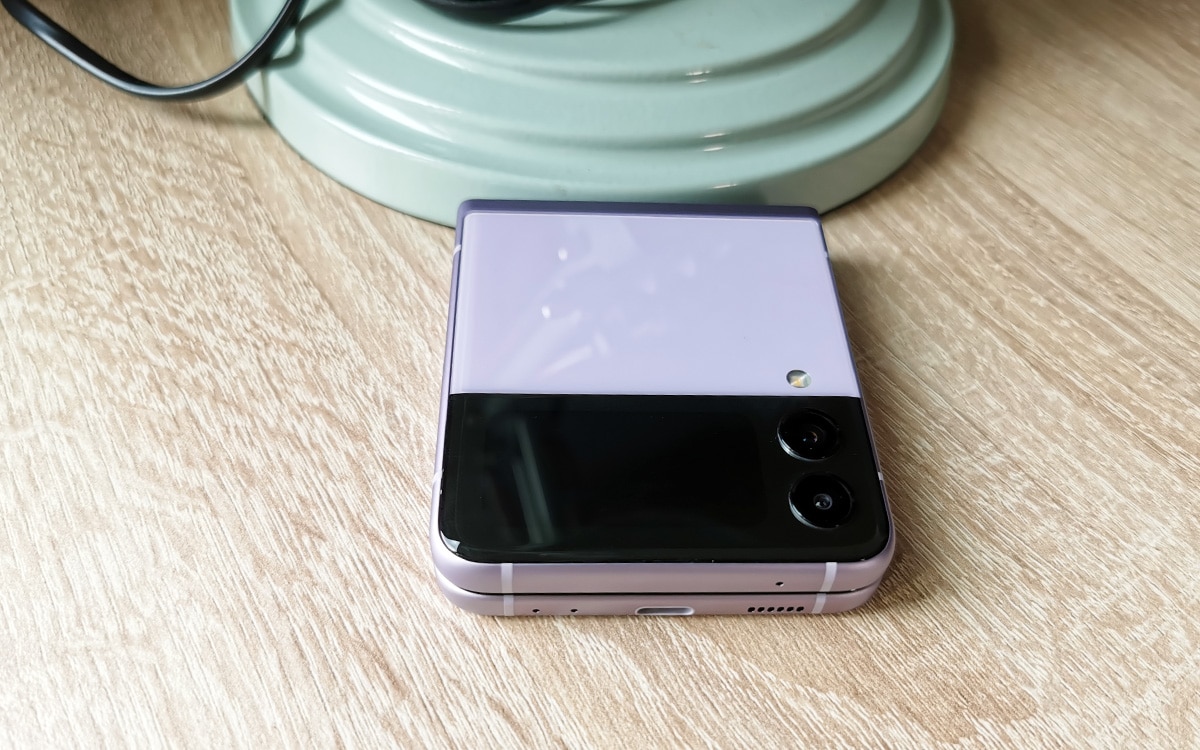 What about the performance of the Z Flip 3?

In terms of power, even if we were not able to bencher the device during our handling, we already know what to expect from the SoC of the Z Flip 3. And for good reason, since the processor in question, we know it well: it is a Snapdragon 888, which is accompanied by 8 GB RAM. We should logically enjoy performance identical to that of a Mi 11 from Xiaomi and quite close to that of a Find X3 Pro from Oppo which has the same processor, but has 12 GB of RAM. 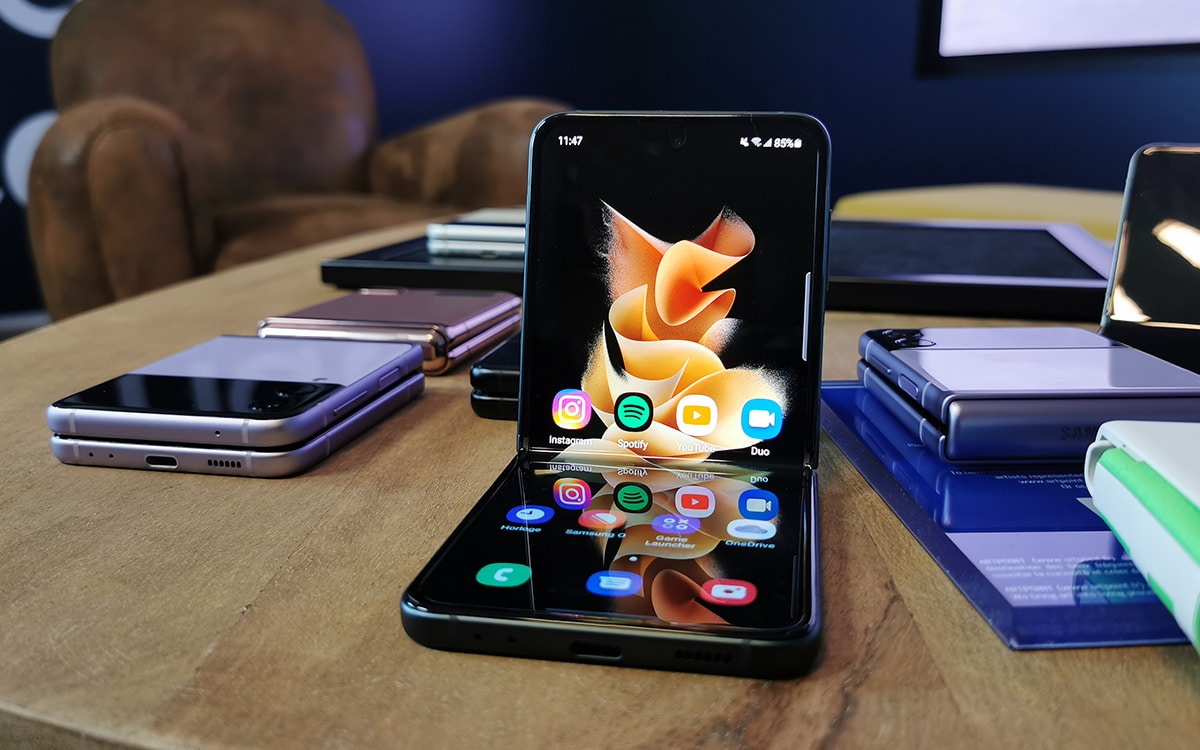 As saying that the Z Flip 3 should offer the top of the basket in terms of power. Regarding autonomy management, this has never been Samsung’s strong suit, as mentioned above. We find the same capacity as on the first generation Z Flip, which did not already shine in terms of longevity (count a little more than a day without putting too much strain on the use of the smartphone).

At the back of the device (once open), we take advantage of a double photo module: a 12 MP main sensor (aperture f / 1.8), and a 12 MP ultra-wide angle also (f / 2.2 aperture). A configuration very close to that of the Z Flip of 2020. We were able to quickly take a few pictures when we got started. Impossible to reveal them to you, since the transfer of photos and data was not allowed during the session. On the other hand, we can tell you that the result is similar to the older generation: shots in full light which are very correct, but which lose a lot of detail when we find ourselves in the dark. 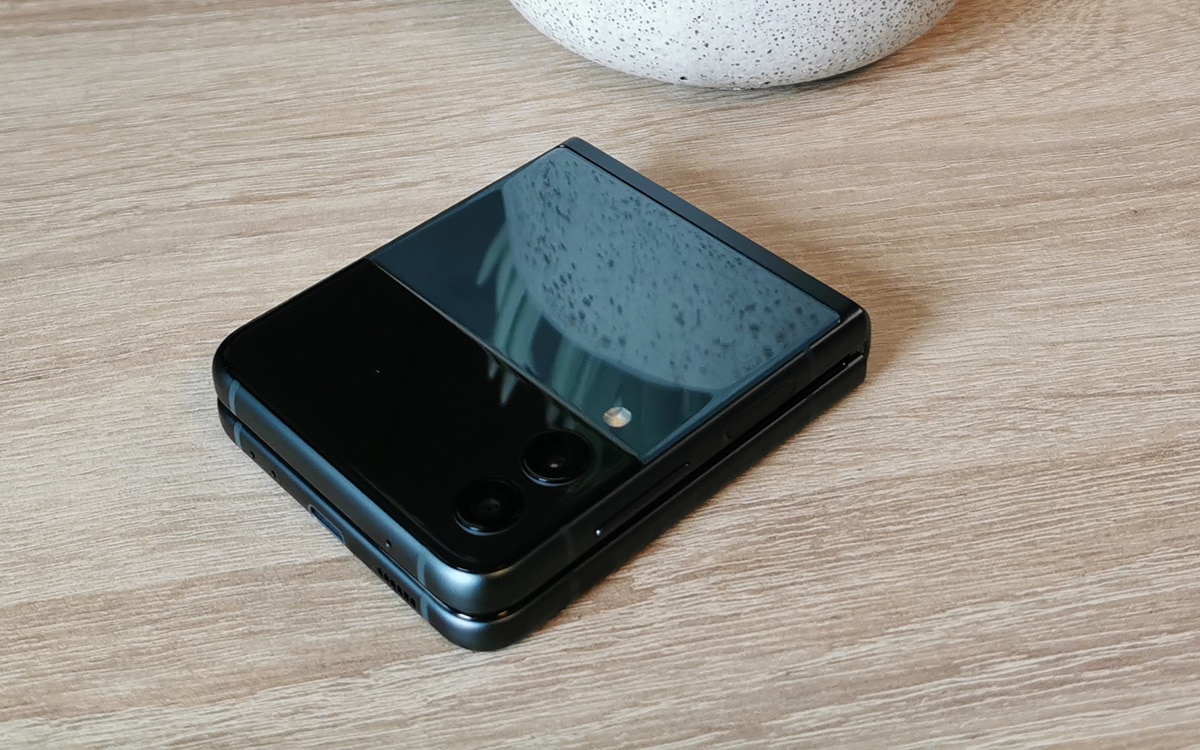 On the front, the screen is provided with a small punch in which the 10 MP selfie sensor (aperture f / 2.4). Again, nothing changes. But the presence of this photo module is an essential point of this smartphone: it is simply perfect for videoconferencing sessions, seflies, etc. No need to have a small tripod on which to put the smartphone, since it is enough to put it on a table and fold it halfway for the Z Flip 3 to turn into a small portable camera. Even if we do not expect feats in terms of shooting quality, there is something to be seduced by this use.

In conclusion, did we like the Z Flip 3 or not?

For now, our first impressions are very positive about the Z Flip 3. Especially since we have not yet addressed one of its major strengths: its price. The device indeed of 1509 euros for the first edition to… 1059 euros for the new version. Or a difference of 450 euros between the two: smartphones with foldable screens are becoming really affordable. 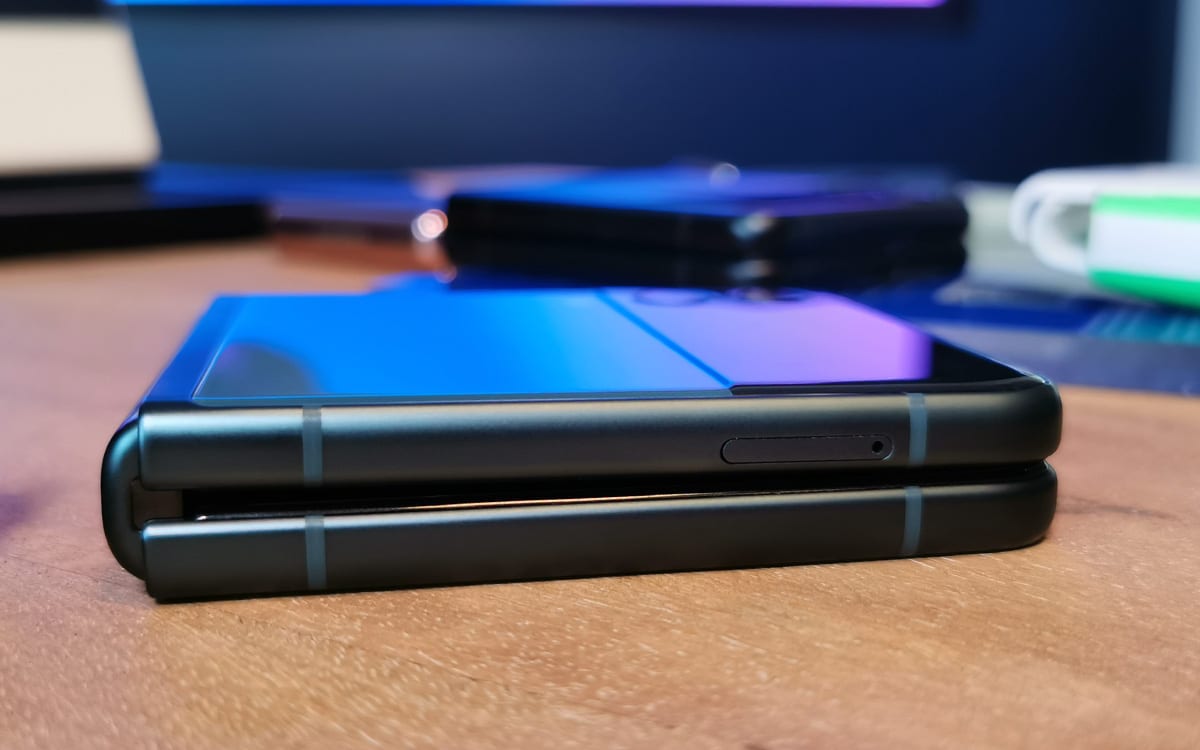 Note that during the pre-order period, which runs from August 11 to 26 inclusive, Samsung offers a € 200 trading bonus for any trade-in of your old smartphone. Clearly, Samsung offers you 200 euros, whatever smartphone you bring, and in addition, you take it back at its current rating.

In the end, we do not hide from you that we were really very excited, but that we are now waiting to be able to test this new Z Flip from all angles. Of course, first impressions aren’t always revealing. Nevertheless, this new iteration really combines all the assets to become one of the flagship products of the year. Now let’s hope that Samsung will have managed to resolve the small battery life issues of previous versions, especially since the integration of a 120 Hz screen may reduce the longevity of the device …