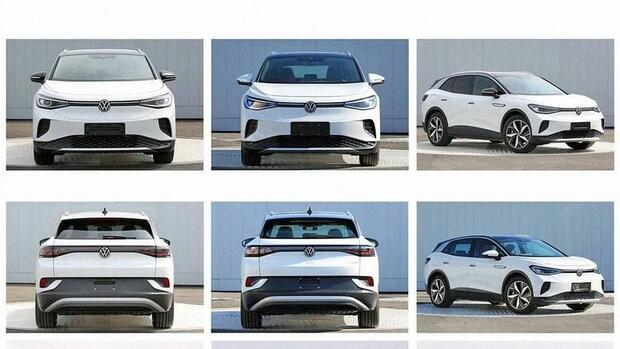 Alleged pictures of the VW ID.4

The first complete pictures of the new and unveiled car have appeared on the Internet.

Dusseldorf The introduction of new models follows a fixed pattern in the automotive industry. Only small details like the headlights or the bumpers are shown. These appetizers are meant to whet the customer’s appetite, but the whole new car would never be shown many months in advance. At most, new models appear in camouflage look, then mostly with glued-on camouflage film.

Volkswagen is doing the same with its new electric cars from the ID model family. After the compact model ID.3, which builds on the Golf from the combustion world and which has already been officially launched, the car company is preparing to launch the first fully electric SUV, the ID.4.

There is also a fully timed chronology for this electric SUV. So far, the car was only visible with camouflage film. The first real presentation of the ID.4 is actually scheduled for autumn. But this time frame has now been broken, the first full pictures of the new and undisguised car have appeared on the Internet.

The starting point of the photo leak is in China, at the local Ministry for Industry and Information Technology (MIT), where the pictures of the new Volkswagen with electric drive were already available. Car enthusiasts had discovered the images at the ministry and distributed them worldwide via Internet forums.

Volkswagen does not officially want to comment on whether the pictures are authentic. Because the Wolfsburg hope that the original schedule for the presentation of the new electric SUV can still be adhered to despite the unplanned publication.

Production in Germany, China and USA

The ID.3 is something like the electric Golf. Volkswagen designed this first electric model primarily for the European market, where the Golf and the compact class have their strongest roots. In other parts of the world, the best-selling Volkswagen model is not as important as it is here.

With the SUV it looks completely different. These cars can be sold in all parts of the world. The SUV boom had started much earlier in the USA and China than in Europe. Volkswagen also reacted to this when it came to model planning for its new generation of electric vehicles.

The ID.4 is something like the first world car from the new Volkswagen electric family. It is produced in Germany as well as in China and in the USA. The first production facility for the ID.4 is the VW plant in Zwickau, Saxony, where the ID.3 also rolls off the assembly line.

Volkswagen is planning to build two new factories for fully electric vehicles together with its joint venture partners for the huge Chinese car market. In China, the production of the ID models should begin at the end of the year, then – according to Chinese preferences – first with the ID.4.

At the start of sales in Germany, Volkswagen is currently concentrating primarily on the ID.3, the first copies of which are to be delivered in September. Afterwards, the group doesn’t have much time for the ID.4, because the first cars should be out by the end of the year.

Technically, this is perfectly manageable for Volkswagen, since ID.3 and ID.4 differ only slightly in the interior. They are manufactured on the basis of a common platform (“modular electrical kit”). The outer skin made of sheet metal, i.e. the body shape, makes the difference. According to ID.4, many more ID variants with other body shapes are planned.