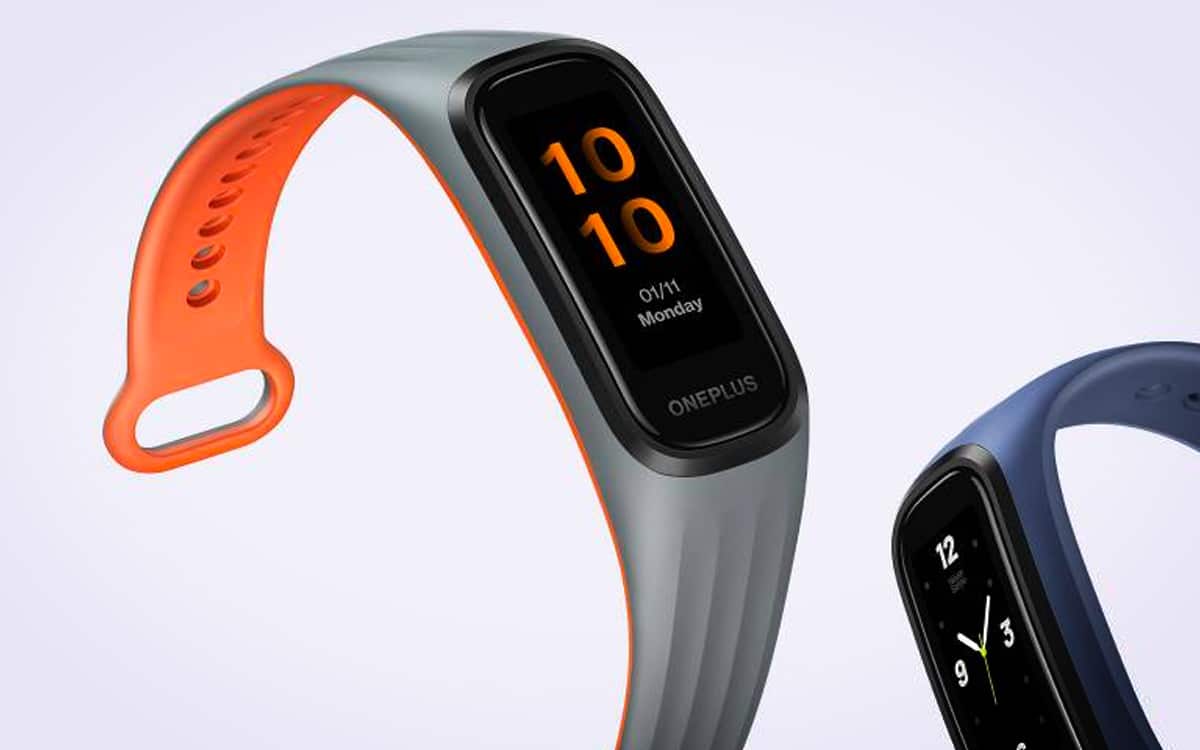 OnePlus has just launched the highly anticipated OnePlus Band. The manufacturer is making a foray into smartbands with a tracker with an AMOLED screen, a heart rate sensor, an oxygen saturation sensor and up to 14 days of battery life for less than 35 euros.

By launching the OnePlus Band, the manufacturer is tackling Xiaomi and its Mi Band 5 head-on. design is similar, as are the functionalities – all with a similar price, not to say almost identical, under 30 euros. In fact, these two bracelets even look like complementary proposals, with on the one hand more health features, and on the other access to an NFC chip.

The OnePlus Band’s screen is a small 1.1 ″ 126 x 294 px AMOLED display with color space P3 (which is not necessarily a must on this type of device, but we appreciate the little attention). The brand explains that the screen is covered with a anti-scratch coating without further details. It will therefore be necessary to see over time whether or not this coating is sufficiently solid.

On the sensor side, it should be noted that‘There is no GPS (which is the norm on this price range). Instead we have a optical heart rate sensor, a optical SpO2 sensor to calculate the oxygen saturation of the blood, a accelerometer and gyroscope. Everything you need to deliver a whole series of additional features such as the counting the number of steps, calories burned, sleep tracking, or even exercise tracking.

Obviously the OnePlus Band is also a remote screen for your smartphone, and as such it displays all your notifications and allows you to answer calls, in addition to allowing you to control music playback. The OnePlus Band can also be used as a remote shutter release when you put your smartphone on a stand and want to take a photo from a distance.

It also comes with useful features such as an alarm, a countdown timer, or a weather forecast. It is compatible with Find My Phone, and offers Zen Mode synchronization on OnePlus smartphones. This mode is a kind of Do Not Disturb mode, to fight against your addiction to screens. When you activate this mode on your OnePlus Band or OnePlus smartphone, all your devices automatically switch to this mode.

In addition, the updates are OTA, i.e. wireless. Battery side, sound 100 mAh accumulator promises up to two weeks on a single charge. Charging is done via a wired charging dongle, which connects to a USB type A port. This smartband is compatible with all Android 6.0 and later smartphones. To use it, you just need to install the OnePlus Health app.

OnePlus Band: an attractive price and a decidedly healthy orientation

This offers a detailed analysis of your health data, while allowing you to configure and personalize your OnePlus Band, for example with new “Watchfaces”. The Xiaomi Mi Band 5 offers almost exactly the same set of features with the same 14-day battery life (Xiaomi’s smartwatch, we note, has a significantly larger 140 mAh battery).

The only real difference is therefore the presence of an SpO2 sensor on the OnePlus Band, and the presence of an NFC chip on the Xiaomi Band 5. The latter is essential for contactless payments – a feature of which the owners of the OnePlus Band will therefore be excluded. Obviously, on the other side, Xiaomi Mi Band 5 owners do not have access to the SpO2 sensor. It remains to be seen which of these features will appeal to the most customers… the bets are off!

Because choosing between these two bracelets will mainly come down to choosing between contactless payments, or additional health features. The OnePlus Band is offered in Black, Blue, and Grus. The device is first launched on January 13, 2021 in India at a price of 2499 rupees or barely 30 euros. Either more or less the same price as the Xiaomi Mi Band 5. We also know that the blue and gray bracelets will be sold separately at a price of 399 rupees or around 4.50 euros.