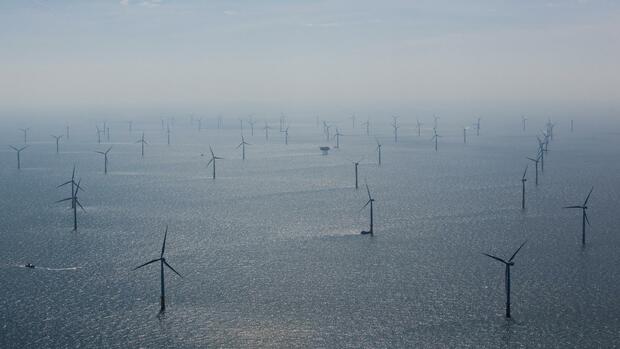 Dusseldorf General meetings at RWE have always been incalculable for the CEOs in the past. Environmentalists used the forum to protest against Germany’s largest coal company. The demonstrators built themselves up in front of the Grugahalle in Essen. In the hall, they interrupted the speeches with interjections and eagerly exercised their right to ask questions.

In this respect, Rolf Martin Schmitz should look forward to the shareholders’ meeting on Friday. The RWE boss will also have to answer critical questions at the virtual general meeting, but he will be spared from demonstrators.

On the other hand, Schmitz would certainly have liked to present himself to the shareholders face to face – and would also have been prepared to confront environmentalists. After all, he completed his big coup in autumn: the return to renewable energies. The multi-billion dollar swap that Schmitz threaded with Eon boss Johannes Teyssen in early 2018 is perfect. “The field of the new RWE is ready,” said Schmitz at the press conference on the financial statements.

And while most DAX bosses have to send bad news to their shareholders in the corona crisis, Schmitz also has good news at hand. The dividend has increased by ten cents to 80 cents per share for the past year, and RWE is already planning a distribution of 85 cents for the current year. All shareholders now receive this dividend uniformly. Last summer the group converted the 39 million preference shares into ordinary shares.

2019 was a historic year for RWE. The federal government sealed the coal phase-out and thus the end of RWE’s old business model. At the same time, the deal with Eon enabled RWE to realign the energy transition. Both left deep marks on the balance sheet.

The transaction raised net earnings from EUR 335 million to EUR 8.5 billion. RWE finally posted a book profit of 8.3 billion euros through the deconsolidation of the sold activities. These were recorded in the balance sheet with historical book values ​​that were significantly below the market values.

Eon took over the RWE subsidiary Innogy in September, but only with the sales and network divisions. RWE received the renewable energies from Innogy and also those that previously operated Eon. The group now covers the entire range of electricity generation, from nuclear and coal-fired power plants to gas and wind and solar plants. And since the phase-out of coal has now been sealed after the nuclear phase-out, RWE wants to focus entirely on the energy transition in the long term and work in a climate-neutral manner by the end of 2040.

There is still a long way to go. The emissions of climate-damaging CO2 decreased by 30 million to 88.1 million tons. However, RWE is still the largest CO2 emitter in Europe. In one fell swoop, the group itself has renewable energy capacities of nine gigawatts. Measured against the total capacity of 43 gigawatts, wind and solar systems do not even make up a quarter.

However, the economic importance of conventional electricity generation has already decreased significantly in recent years because coal and gas power plants are increasingly being pushed out of the market by wind and solar systems, which are primarily allowed to feed in their electricity. Earnings before interest, taxes, depreciation and amortization (Ebitda) of German lignite and nuclear power plants increased by five percent to 374 million euros in 2019, but the time of billions in profits is long gone.

The European power generation segment, which includes hard coal and gas power plants, increased Ebitda by 36 percent to EUR 453 million. However, this was mainly due to a refund in the UK, where the government had intervened heavily in the market the previous year. 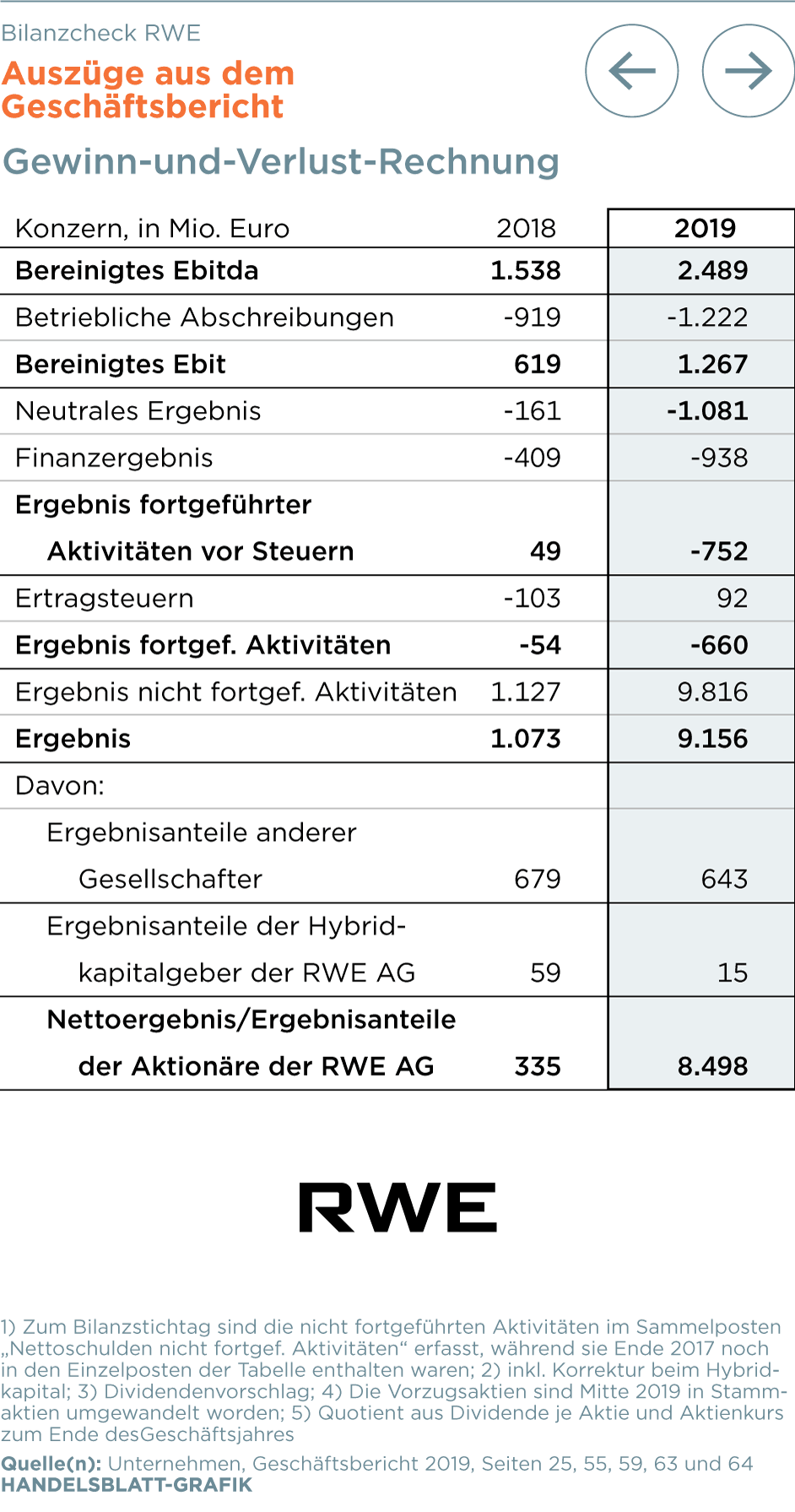 Overall, RWE already earned less with nuclear, coal and gas power plants last year than with renewable energies. Innogy’s plants alone, which RWE will continue to contribute, contributed 833 million euros to Ebitda, 19 percent more than a year earlier. The Innogy wind farms were better utilized due to favorable weather conditions. The plants acquired by Eon, which were incorporated in September, delivered an additional EUR 253 million.

Energy trading went surprisingly well last year. RWE was able to increase Ebitda from 183 to 702 million euros – the result was planned in a corridor of 100 to 300 million euros. The trading department was surprisingly successful.

Overall, Ebitda rose by 62 percent to just under 2.5 billion euros. RWE raised its forecast twice in the course of the year. In March, the group still expected the Ebitda between 1.4 billion and 1.7 billion euros.

The transaction with Eon opens up new perspectives for RWE. The coal phase-out that the Federal Government initiated last year is no less drastic for RWE. After the nuclear power plants have to gradually go off the grid, it has now been decided to phase out coal. The roadmap is in place and the related law is due to be adopted soon.

Production and electricity generation in Germany will end by 2038. The RWE Group, which is involved in coal like no other company, will have to drastically reduce its lignite production in the coming years and take the first power plants off the grid.

RWE puts the damage at least 3.5 billion euros. In return, the group also receives compensation payments of 2.6 billion euros, which flow over a period of 15 years.
In the balance sheet, RWE therefore had to increase mining provisions by EUR 2.1 billion to EUR 4.6 billion by the end of the year – and increase pension provisions. The group also wrote off 500 million euros on the power plants and opencast mines.

The coal phaseout does not only affect RWE in Germany. In the Netherlands, which wants to end the generation of electricity from coal by 2030, the group had to write off 700 million euros – especially on the Eemshaven power plant, which RWE only started up in 2014.

Now that the coal phase-out has been sealed, the RWE Group now wants to focus all of its energy on future business with renewable energies and concentrate its investments on it. By 2022, RWE plans to invest five billion euros in its new core business and build wind and solar plants with a capacity of four gigawatts. 2.7 gigawatts are already under construction, and RWE claims to have another 20 gigawatts in the project pipeline.

RWE also has ambitious growth targets. From 2020 to 2022, the Group wants to achieve annual growth of seven to ten percent based on the key figures for the result. Adjusted EBITDA of between 2.7 and 3.0 billion euros is expected for the current fiscal year 2020.

According to its own assessment, the corona crisis will hardly impact RWE. The energy sector is comparatively robust. Electricity demand has also decreased, but RWE has long since sold the production on the futures market. In the first three months of the year, Ebitda was 1.3 percent, 19 percent higher than a year earlier.

Rolf Martin Schmitz will present the upcoming balance sheet at the 2021 Annual General Meeting. Then he can also explain the new RWE to critical environmentalists – and hope for mild circumstances. The 64-year-old will then step down in summer 2021. His successor was recently determined: CFO Markus Krebber will be the next RWE boss.

More: Eon in the balance check: The mega deal with RWE weighs on the energy group