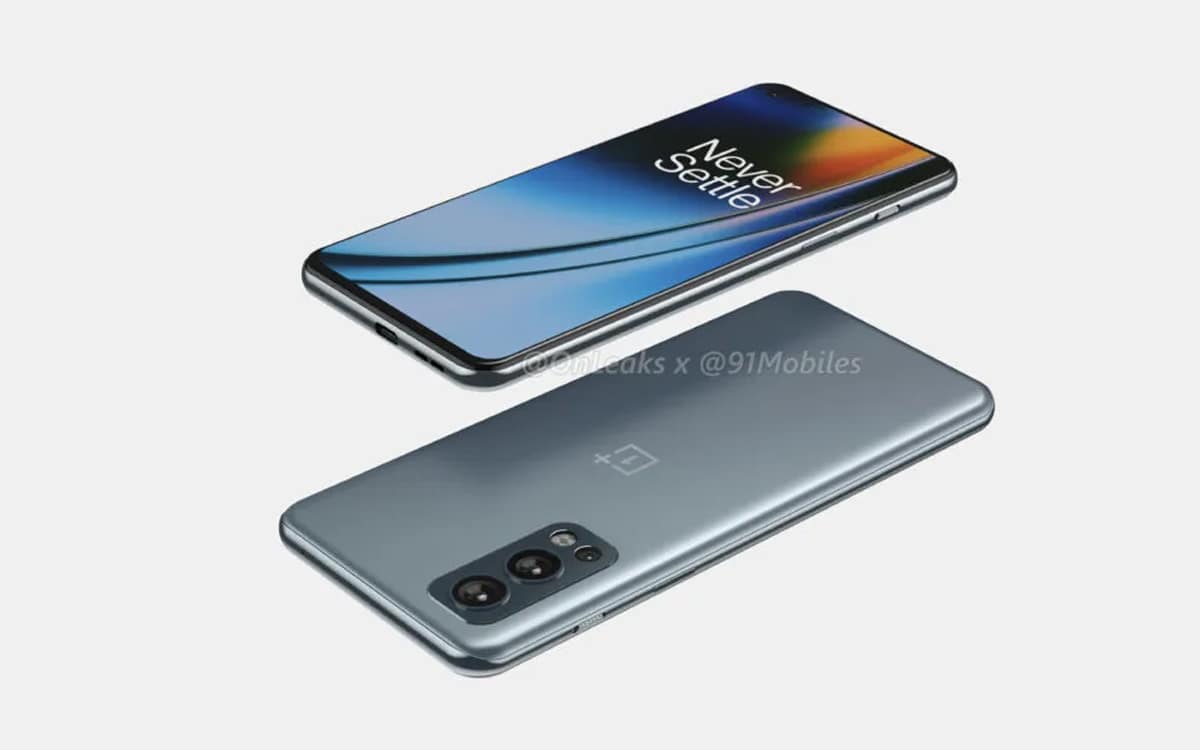 The OnePlus Nord 2 follows on from the popular OnePlus Nord, still with a very attractive price-performance ratio, and camera and battery improvements on this new model. Most of the technical specifications are known, find out with us.

2020 marked a turning point in the history of Oneplus, which has moved away from its historic premium strategy to explore entry and mid-range markets with its Nord smartphones. Previously, the brand had only tried the experience once, with the OnePlus X, for a failure that has long traumatized the manufacturer. But OnePlus has revised its strategy: it should gradually give way to OPPO (the two brands are placed under the tutelage of the same entity, of which Pete Lau, co-founder and former CEO of OnePlus, is at the head) in the high-end segment to make affordable smartphones its core business.

The OnePlus Nord first of the name had caused a sensation for a quality-price ratio close to what can be found at Xiaomi in particular, its successor is about to make its appearance. Here is what we already know about the OnePlus Nord 2.

What is the price of the OnePlus Nord 2?

The OnePlus Nord was marketed in France at a price of 399 euros. The OnePlus Nord 2 should display the same price, the first model partly owing its success to its entry ticket located under the symbolic bar of 400 euros. We do not see the manufacturer taking a risk by increasing prices from the second year of the range. More muscular configurations will also be available for larger memory needs.

When is the OnePlus Nord 2 released?

Several reports state an official presentation of the OnePlus Nord 2 in the course of July 2021, as for the first generation last year. More precisely, it should be expected in the last third of the month. The date of 22nd of July was mentioned in India, the new privileged market of OnePlus.

However, we do not know if the smartphone will be available immediately after its announcement, it is possible that we will have to wait until the beginning of August to have the opportunity to get their hands on it. In any case, the OnePlus Nord 2 will be eligible for the offer including a pack First Edition of Google Stadia according to the official website of the manufacturer. A promotion that ends on September 30, 2021, confirming a most likely release during the summer.

A design similar to that of the OnePlus 9

The design of the OnePlus Nord 2 will evolve to be closer to that of the mobiles of the OnePlus 9 series launched last spring. Thanks to the renowned OnLeaks leaker and the 91Mobiles media, we already have accurate renderings of what the smartphone will look like. On the front panel, no surprise: the front camera is housed in a punch (smaller because it only accommodates a photo sensor instead of two) in the upper left corner of the screen, the latter incorporating a reader of optical impressions. It is not to be ruled out that we lose a few millimeters on the lower border.

But it is on the rear panel that we see the most changes, with a photo block directly inspired by that of the OnePlus 9. We should find two large lenses, associated with a smaller sensor as well as the LED Flash. An aesthetic that has become usual for almost a year and a half already, but the first OnePlus North had kept an alignment of the photo modules “old”.

The smartphone should be made of the same materials as its predecessor, namely a plastic frame and a glass back. These were rather convincing on the previous generation for a device offered at this price. We can on the other hand make a cross on a 3.5mm jack port. The OnePlus Nord 2 will not be certified resistant to water and dust either, the certification would cost too much to the manufacturer who seeks to control its prices. But do not forget that the lack of certification does not mean that the mobile is not waterproof.

An AMOLED screen that does not evolve

OnePlus blew us away with the screen quality of its North, the brand decided to renew the winning formula. AMOLED technology is therefore making a comeback, with Full HD + 1080p image definition, support for the HDR10 + standard and a 90 Hz refresh rate. All for a screen diagonal of 6.43 inch and a 20: 9 ratio.

Performance entrusted to a MediaTek chip

The OnePlus North was powered by a Qualcomm Snapdragon 765G SoC, but the manufacturer is preparing to make a historic change. Qualcomm has so far supplied all the chips equipping OnePlus smartphones, which will pass for the very first time to competitor MediaTek. It must be said that MediaTek has improved a lot lately, since the launch of Dimensity, and has filled part of the delay that separated it from Qualcomm on the entry and mid-range, and even lending itself ambitions on the premium. The group now offers SoCs at a very attractive price-performance ratio, and has also surpassed Qualcomm in terms of market share on mobile.

It is therefore a MediaTek Dimensity 1200 which is in charge of running the OnePlus Nord 2, a chip engraved in a fineness of 6nm according to a process of the TSMC founder. It is quite simply MediaTek’s most powerful SoC to date. While it does not deliver Snapdragon 888-level performance, it would on the other hand be roughly on par with Samsung’s Exynos 2100, which can be found on the latest Galaxy S21s. A beautiful promise of power.

The OnePlus Nord 2 is of course 5G compatible.

The song has been known for years: you have to cover a wide range of budgets and needs in order to attract as many consumers as possible to your product. And in this game, it is often the memory that is called upon to offer various configurations adapted to the greatest number.

The OnePlus Nord 2 will have according to a benchmark a configuration with 8 GB RAM. It is almost acknowledged that a model with 12 GB of RAM is also available. A low-cost alternative with 6 GB of RAM could accompany them. In terms of storage space, at least two options will be available to interested parties: 128 and 256 GB, which could be joined by a 64 GB variant.

The battery capacity increases, the autonomy too?

With an accumulator of 4500 mAh, the OnePlus Nord 2 should benefit from better autonomy than the OnePlus Nord and its 4,115 mAh battery. Especially since the screen should not be more greedy. It will still be necessary to monitor the energy consumption of the MediaTek Dimensity 1200 SoC and the optimization with this new platform to be sure.

The smartphone would have a fast charge of up to 30W wired. He … not not support wireless charging, a feature deemed dispensable by OnePlus, which prefers to go to the essentials to keep an attractive price.

A camera with Sony sensors

The partnership with Hasselblad is reserved for high-end smartphones, the OnePlus Nord 2 is therefore deprived of the expertise of the optical specialist. But this does not mean that the manufacturer will abandon the photo part, which is evolving compared to the first generation. The main attraction of the setup is undoubtedly the 50 MP Sony IMX766 main photo sensor, supporting 10-bit color depth and with an aperture of f / 1.7. A module that convinced us in our test of the OPPO Find X3 Pro.

It will be supported by two other sensors, an 8 MP ultra wide-angle and a 2 MP lens, the usefulness of which is not yet known (for macro mode or depth of field probably). The 32 MP selfie camera completes the whole thing, there is no ultra wide-angle sensor on the front like on the original Nord.

OnePlus and OPPO share their research and development as well as software development teams now. OnePlus is not going to abandon OxygenOS to switch to OPPO’s ColorOS, but the two overlays go from now on on a common technical platform. A priori, the interface specific to OxygenOS should therefore be kept, but we can hope for better responsiveness to bug fixes and new features from the OPPO ecosystem. But all this is not yet very clear to this day.

The OnePlus Nord 2 will be released under OxygenOS 11, based on Android 11 (OnePlus changed the numbering of its nomenclature some time ago to follow that of Android for clarity). A version that we know well since already on board the OnePlus 9 and deployed with many other models, including the OnePlus North.

Finally, OnePlus revealed that following the merger of its resources with OPPO, the software tracking of its smartphones will improve. The OnePlus Nord 2 will be entitled to two feature updates (Android 12 and Android 13) and three years of minimum security updates. This is the same treatment as the brand’s top-of-the-range devices before, which for their part go through three and four years of functionality and security updates, respectively.