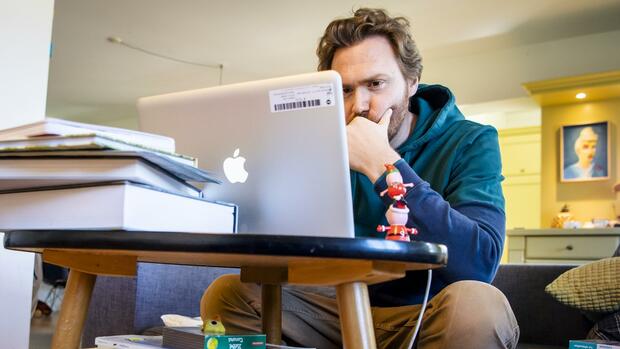 Berlin The corona virus will continue to be difficult for the German economy. Europe’s largest economy bottomed out in April. “However, the complete recovery from the crisis will take some time,” says a recently published forecast by the Institute for the World Economy (IfW).

However, the consequences of the pandemic do not hit all industries equally hard. The Internet economy in Germany could even emerge from the crisis as a major profiteer. At least that’s what a new study by the management consultancy Arthur D. Little on behalf of the digital association Eco suggests.

“Despite a worldwide pandemic that affects almost all areas of life, the Internet economy is emerging from the crisis stronger in the long term,” says the analysis, which will be presented on Tuesday and was available to the Handelsblatt in advance. Thanks to functioning home workstations and video conferences via the Internet, the digital economy has been able to reduce the economic and social effects of the crisis. The creators of the study estimate that the industry will turn over around 145 billion euros in Germany this year. By 2025, sales are expected to increase by almost 75 percent to around EUR 253 billion, which corresponds to an average annual growth of twelve percent.

“The next few years will be the start of a digital decade of superlatives,” said Eco CEO Oliver Süme. “Digitization – not only Corona shows this – will continue to play an increasingly important role in the German and European economy in the future, and in the long term the share of the Internet industry will increase in all industries.”

The current pandemic will slow the development down at most, but it won’t stop it. With a 1.2 percent decline in sales compared to the previous year as a result of the lockdown measures, the Internet economy is “robust” compared to other sectors due to the corona crisis, the study says. That means: Many areas will recover quickly from the short-term negative “shock”, and growth declines caused by the crisis can be completely compensated for by the end of 2022.

E-commerce business as a “dominant source of revenue”

The study authors speak of a “catalyst effect” due to the corona crisis, which in the medium term will promote the expansion of digital infrastructures and the implementation of digital business models. In the “long-term perspective”, the Internet industry will get an “additional growth spurt”. “In the period from 2020 to 2025, we expect sales to grow by 9.5 percent annually,” says the study.

The analysis divides the Internet economy into four areas: The first level comprises everything that enables stationary or mobile access to the Internet. The second level includes hosting and domain providers, for example. On the third level, in addition to the e-commerce business in the B2B area, the experts include numerous providers of B2C e-commerce platforms and operators of portals subject to contributions. The last level is paid content. Actors at this level generate or acquire information from third parties and make it available for marketing or for a fee. Gaming, TV and video providers belong on this level.

The e-commerce business alone (third level) will generate around 40 percent of the total sales volume (57 billion euros) in 2020. According to the study, the area remains a “dominant source of sales” for the Internet industry in Germany with an average growth potential of 10.3 percent per year. According to this, sales here should rise to around 93 billion euros by 2025. A further third of the total sales volume will be generated in 2020 through digital business models in user industries (smart industries) and through the marketing of digital content (paid content). In this area, experts expect sales to double from 44 billion euros in 2020 to 88 billion euros by 2025.

The area of ​​hosting and domain providers has a comparatively small share of the total volume with 2020 sales of almost 14 billion euros. However, due to the increasing demand for public cloud services, the study authors expect a strong growth spurt by 2025, so that the sales volume should more than double. On the other hand, significantly less growth is expected in the first level, the technical infrastructure.

Politicians also expect the internet economy to play an increasingly important role in the future. Above all, the pandemic will accelerate existing trends, especially in the area of ​​platforms and software, says CDU member of the Bundestag, Tankred Schipanski. However, it is important “that we rein in the monopolists in these areas”. For this purpose, the law against restrictions of competition is currently being made “fit for the digital age”.
The planned European cloud Gaia-X also helps to give small and medium-sized companies a fair chance in competition with dominant platforms and software service providers.

The SPD politician Jens Zimmermann also assumes that the potential of the Internet economy in Germany can be “unleashed” after the corona crisis. “With almost a million developers, the industry is already a very important economic factor,” said the member of the Bundestag. “I am less worried that highly qualified jobs will be created elsewhere, but rather that there are not enough qualified personnel in Germany to fill all potential positions.”

Therefore, the federal states in particular are required to massively accelerate their efforts in the area of ​​digital education. “Corona has relentlessly disclosed deficits in hardware and software, but also training and further education for teachers.”

More: Read here how the start-up scene wants to make Germany a stronghold of digitization.