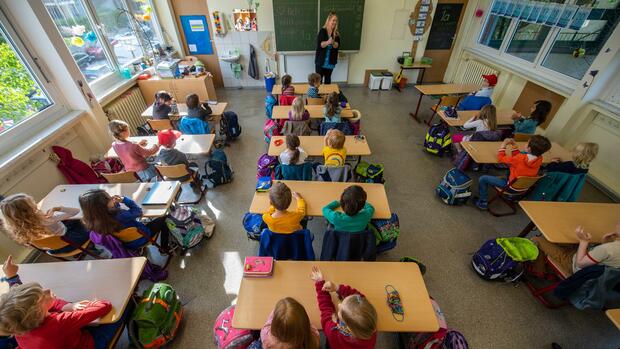 Students of a first elementary school class in Dresden sit in their seats in the classroom.

Berlin After the prime ministers and the chancellor announced the general reopening of the schools after the holidays, the ministers of culture have now agreed on the conditions: Lessons in the classrooms should then start again without a distance rule of 1.5 meters – at least as long as the infection does not go away worsened again.

That doesn’t quite fit what Angela Merkel had announced for the people as a whole: in general, the citizens should continue to keep their distance. An exception will soon be made for the students.

The district of Gütersloh is currently showing how quickly it can be done differently: because of the mass infection at the meat processor Tönnies, all schools were closed again. Before that, this was also necessary in Göttingen.

Such drastic steps should be the absolute exception in future, according to the ministers of culture. “It is really important to us that the right to education, what constitutes school as a social place, as a place for social learning, that this is very high and that school closures should be an ultima ratio in the future, taking into account the infection process,” said the president of the conference of culture ministers, the Rhineland-Palatinate education minister Stefanie Hubig (SPD) after the deliberations.

As a next step, the education ministers want to ensure that the hygiene measures are adapted “for everyone involved in schools” on site, said Hubig. This should happen “in good time” before the end of the summer vacation – so the ministers of culture are still taking their time here. It is all about the occupational safety for the teachers, which they want to ensure “in full”.

Distance and hygiene measures are essential to protect teachers, students and parents from infections. Udo Beckmann, the head of the Education Association, had warned that it was a farce if customers and staff separated plexiglass panes in every supermarket – but there was no distance between them and schools were not protected.

In addition, an estimated ten to 20 percent of teaching staff could stay away from schools as a “risk group”. However, these must at least now prove their previous illnesses by means of a certificate.

In addition, the ministers of culture decided to quickly expand the digital equipment – as well as overdue mass training for teachers in this area. In this context, they also promised more educational equality – for example, by lending students who do not have their own laptops.

The federal government had recently increased the digital pact by one billion euros to a total of six billion. This means that an additional 500 million is available for the purchase of rental laptops. According to the decision of the heads of government on Wednesday, these should be available as early as possible after the summer holidays.

Another 500 million euros are now available for the financing of IT administrators in schools. Most recently, however, the funds for the IT infrastructure had been drained very slowly, the lion’s share of the digital pact agreed in mid-2019 is still unused in the state coffers.

More: Read here why Germany must finally invest more in the school system.