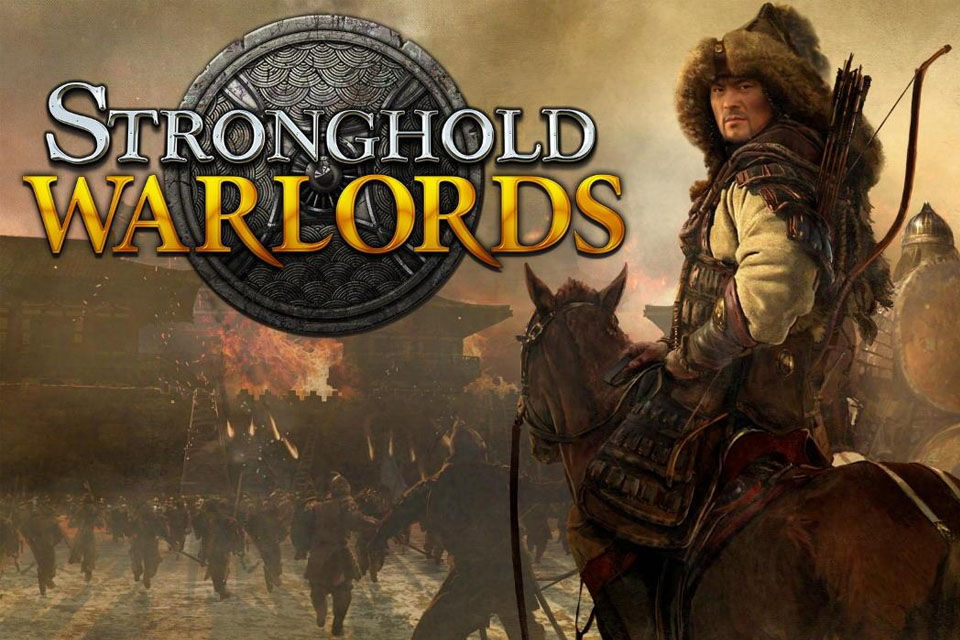 The mix of construction and RTS genres gained strength in the 2000s, driven by the success of some classics, such as Age of Empires. Stronghold, from Firefly Studios, has also received its due notoriety for bringing clan combat to the development of castles. It was sure that it would work, after all, who never went to the beach to make a real sand fortress?

With the arrival of Stronghold Warlords, the franchise now has 8 titles and ends a 7-year hiatus without games. The new title draws heavily from the source of what was found in Stronghold Crusader II. Warlords brought some innovations, but not enough for those who waited so long.

The campaign is the main way of Stronghold Warlords. It brings 5 ​​different stories for you to have fun, 4 of them focused on military growth and another on economic development.

Three adventures are set against the backdrop of Chinese territory, one in Vietnamese and the other in Japanese. Being the most important mode in the game, I imagined that we would have a more lasting campaign. In less than 12 hours it will be possible to finish all missions and without much difficulty, even at the most difficult level.

In the beginning, only the “Jungle Kingdoms” campaign will be unlocked. In it, you command the legendary Th? C Phán, who led the region known today as Vietnam, in 200 BC. By going through the stories, you unlock all available content. 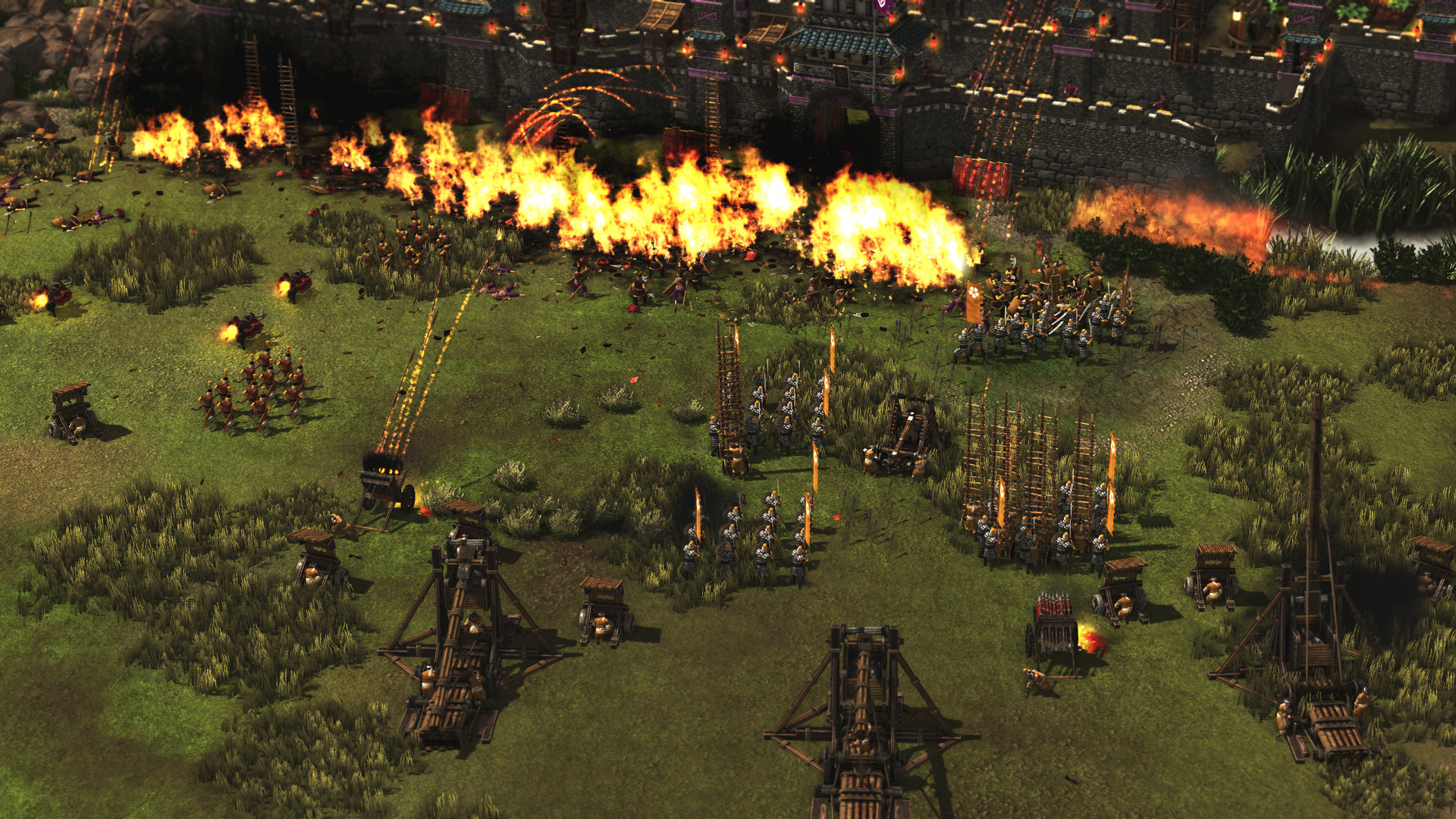 If single player mode wasn’t enough, Stronghold Warlords has a fantastic customization power, as is already known to those who follow the franchise. There are several ways to implement your game, making the replay factor very high.

In Skirmish, your mission will be to build a map opting for the 4 clans available. You will choose the number of opponents, opponents and warlords, as well as customize the amount of gold, research, food and initial troops.

The big icing on the cake is for Free Build Mode and User Maps. In the first, you take as long as you want to build your perfect castle, while in the second, you will be able to create and edit maps, in addition to making it available to other users.

The game’s management trees are easy to understand, following what we’ve found in previous games in the series. The development chain follows the order known in the genre, going through the acquisition of resources and the mode of production.

As the focus of the game is on combat, practically everything works in an easy way, without bringing a headache to the player, so our analysis will go through a lot in this regard.

There are two ways to bring your fighters into the war field. The tents will produce knights, soldiers with swords, maces, axes and bows and arrows. There is also the category of spearmen, knights with spears and crossed bows. 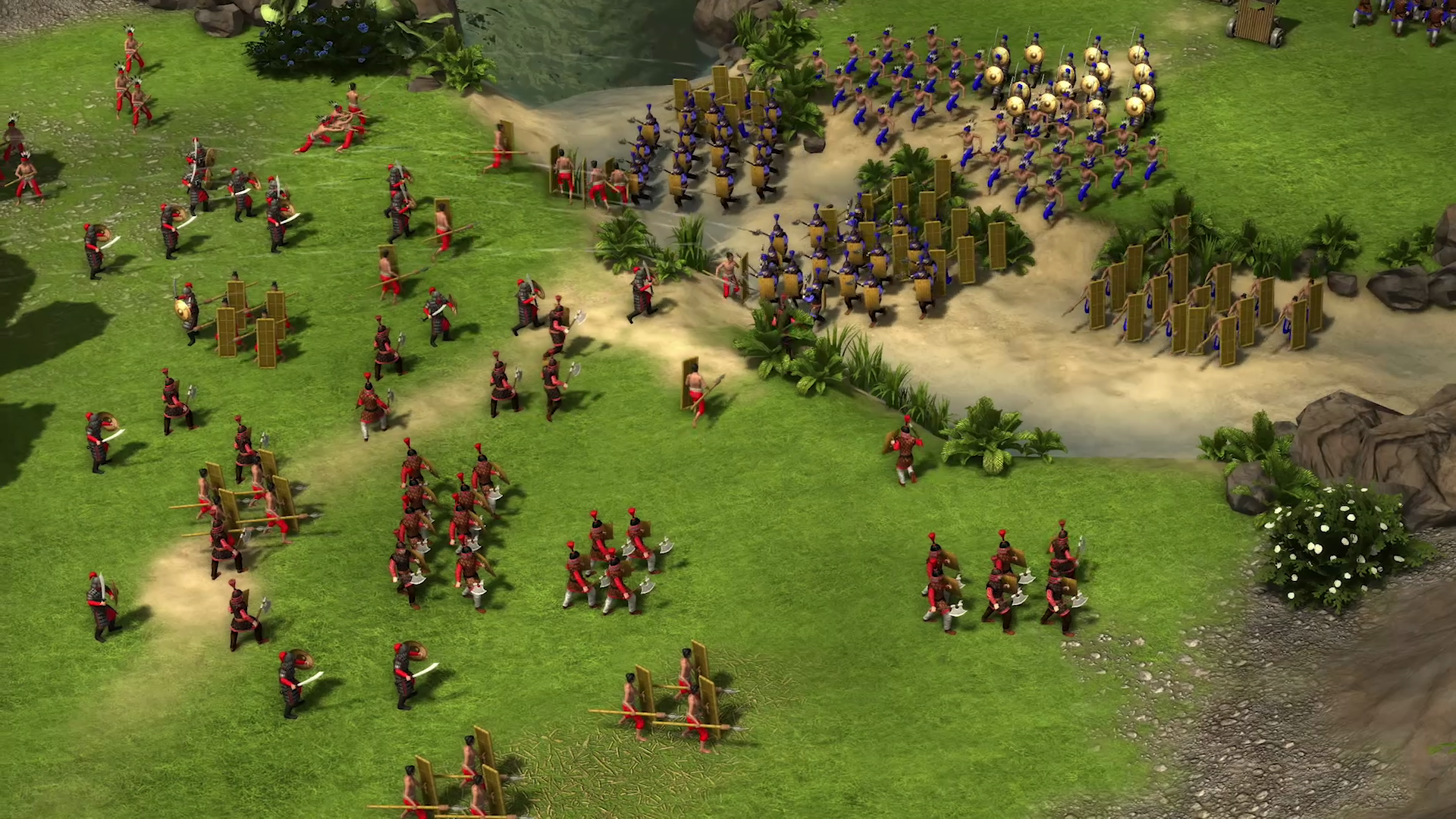 Don’t think it’s over, as another construction is the Military Academy, which will bring warrior monks, ninjas, fire-throwers, samurai and generals into combat. These troops cost more money, so you understand that they have more strength than the others, in addition to special abilities.

To complete we have the Siege Camp, which will produce Catapults, rocket launchers and ballista, a machine that fires giant darts.

Despite being a castle-building game and an abundant management in practically all areas, one of the most important ingredients for your success in the game is diplomacy with Warlords. It could not be different, since the name is even in the title of the game.

You can control them in two ways: using them in combat or issuing decrees. To carry out actions with your commanders it is necessary to acquire Diplomacy Points, which are generated daily throughout the adventure. Either way, it is possible to increase daily production by building an embassy or consulate. 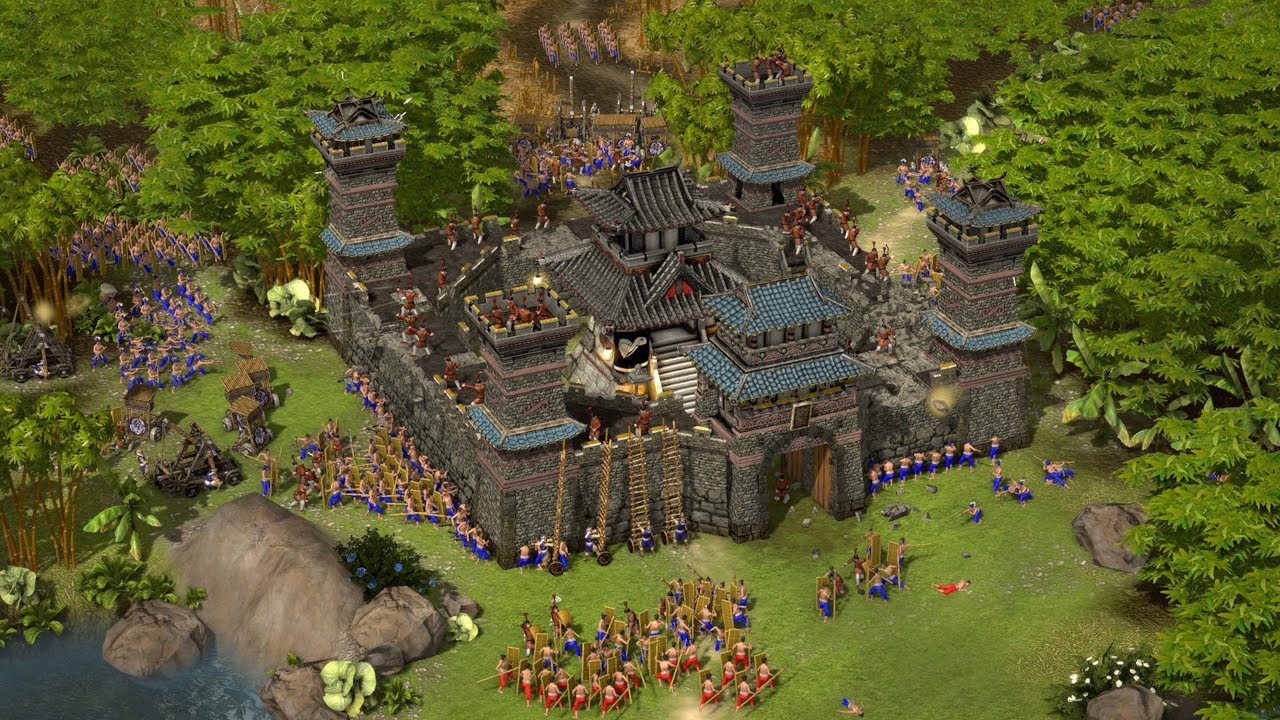 By using your warlord the adventure will be much easier. In addition to being stronger and more resilient than any other combatant, your participation in the adventure can take some of the fun out of the adventure.

I played the open-dev version and the imbalance was notorious. Now, the situation has improved a little, but it is still very difficult to find a certain difficulty in the missions.

Unlike the other games in the franchise, the producer opted for a strong and intense color palette, which did not please. It is interesting to debate on this subject, as anyone who focuses on games like this, seeks an immersive experience, trying hard to reconstruct history.

When the production company chooses to make the game more cartoonish, it removes the existing interactivity between the characters, scenery and the player. It is also worth mentioning that the title presents problems when playing in 4k. 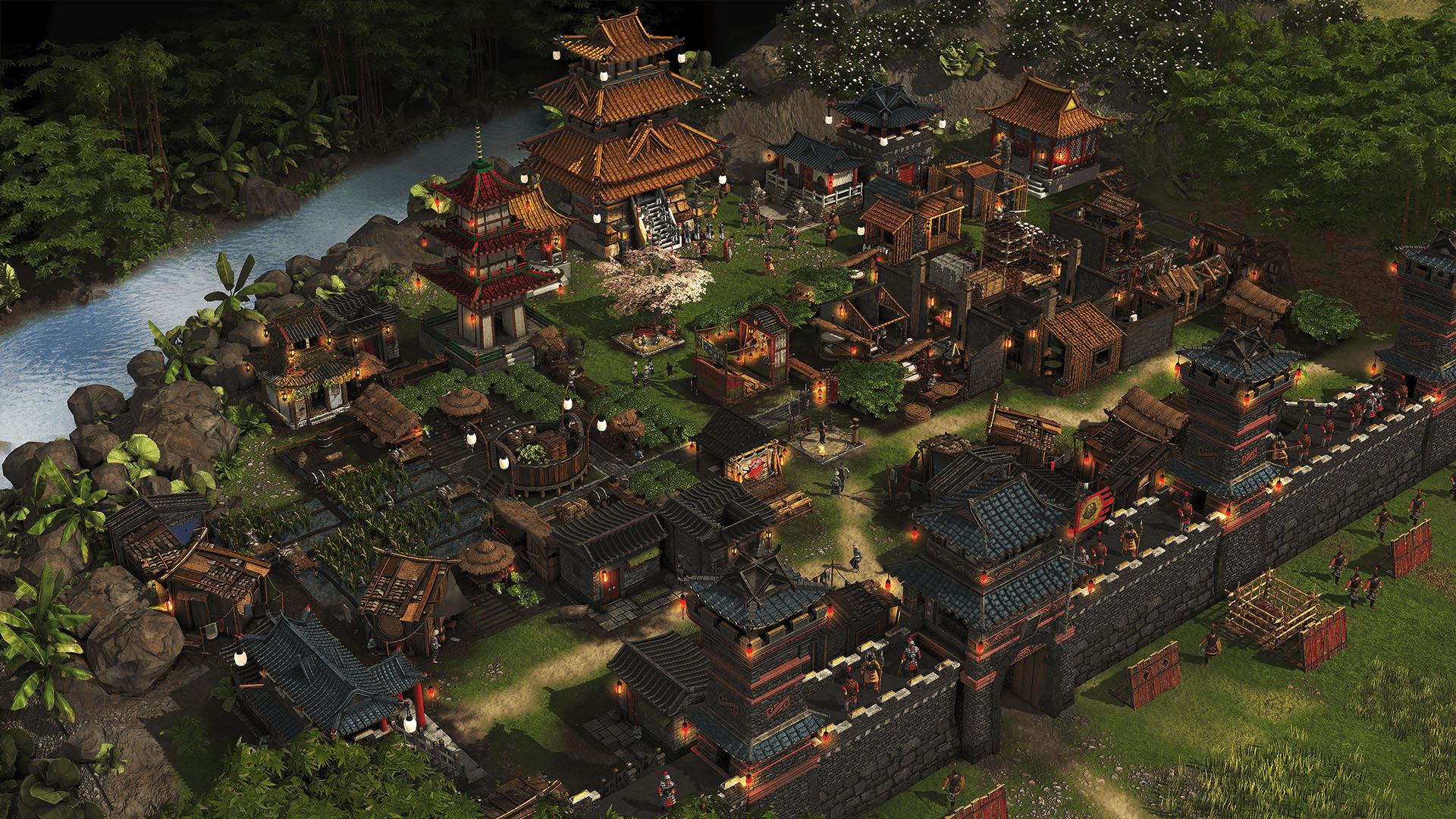 At certain times, the scale of the sources becomes small, hindering the understanding of what is really happening in the story. The same occurs with the optimization, which presents a slight block in the movement of the camera

It was not this time that Firefly Studios managed to rebuild castles made in the past, bringing nostalgia, challenge and entertainment. The game is simple, although it has some interesting features that increase the replay factor.

The gamer will not have a big challenge ahead of him, unless he ventures into multiplayer mode. The challenge was left aside and much must be done so that the company does not lose the countless fans it has conquered in the past.

Stronghold Warlords was kindly provided by FireFly Studios to carry out this analysis.