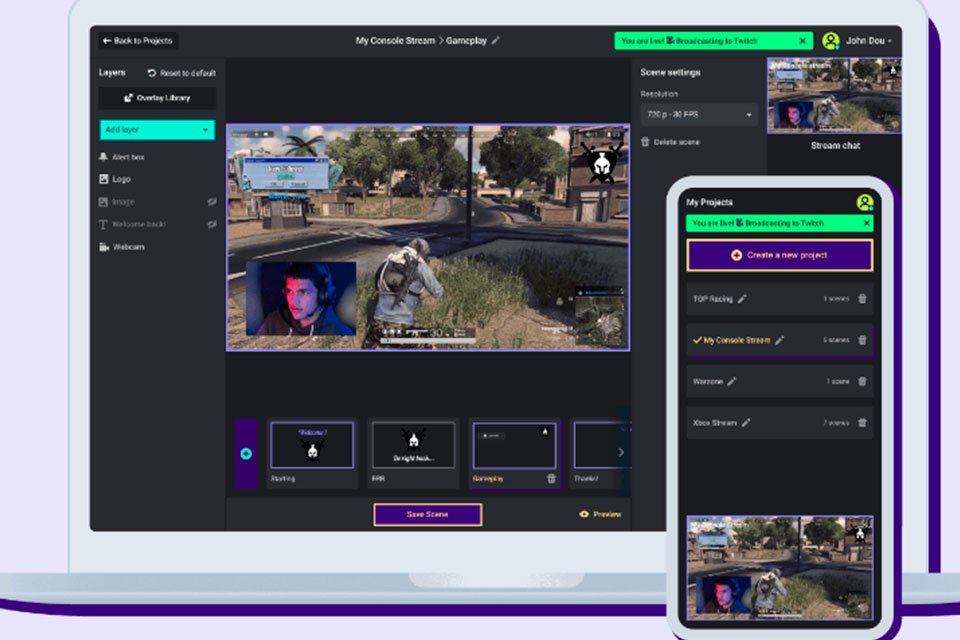 This Tuesday (16), software and tools provider for live streams Streamlabs was accused of plagiarism by streamers and other companies after revealing its initiative Streamlabs Studio, a variant of the service that brings more settings for Xbox Lives.

The novelty, launched in partnership with Twitch, brings engagement options and overlays to the console, including alerts and widgets, which previously required the transfer of content via a capture card to the computer for customization.

Also, by using cloud capture, clients can access control features on mobile and, since it works across browsers, a powerful machine is not needed for editing.

However, shortly after the announcement, Lightstream, provider of a similar service but which also works on Playstations 4 and 5, complained that Streamlabs promotional material is a copy of their website.

? Yeah, just change it up a bit so it’s not obvious you copied.

“Hey, can I copy your homework? Yeah, just change it a little bit so it’s not obvious you did,” complained the company, making fun of the situation. In addition to the tool description texts being nearly identical, the same layout is used — only the images are different.

The feedback session from users is also the same, with the only difference being the different “prayers”. Stu Grubbs, CEO and co-founder of Lighstream, claimed that even the user experience on the product was copied.

The team at @streamlabs should be ashamed. Not satisfied enough to ride @OBSProject’s hard work. Now to copy ours down to the layout and every word on our marketing site and our UX in this product. https://t.co/Lot2KPh72y

In response to the indictment post, Streamlabs admitted the error and said the page was tentative, made available by an error, and the material has now been corrected. But streamer Cohh Carnage questioned the justification by pointing to minor changes to the site, such as customer names praising the product. “If it was temporary, why did they create new people for the quotes at the bottom of the page?” he concluded.

In addition, the portal Dot Sports stated that he received an email outreach from Streamlabs, so the site was actively publicized and not just “leaked”.

“During my time at Streamlabs, a lot of marketing people were reprimanded, put on PIPs (performance improvement plans) or fired for complaining about unethical business practices,” said Twitter user Super Pan, who says he is a former employee.

Streamlabs OBS is not associated with OBS

Elgato showed interest in the situation, publishing that it has also been copied by the streaming service.

Furthermore, the open broadcast platform OBS revealed that the defendant has contacted her staff in the past to use the term “OBS” in the name of the app. The application was rejected, but the competitor used it anyway, registering the Streamlabs Open Broadcast Software (OBS) trademark and creating confusion that the two entities are partners.

Near the launch of SLOBS, @streamlabs reached out to us about using the OBS name. We kindly asked them not to. They did so anyway and followed up by filing a trademark

We’ve tried to sort this out in private and they have been uncooperative at every turnhttps://t.co/r1eXr3VxcJ

Famous streamers such as Pokimane and Hasan have also expressed displeasure at the revelation and have threatened to abandon their partnership with the platform if the issue is not resolved.

streamlabs better resolve this entire thread of issues or i’ll be asking them to take my face off the platform + look to use another donation service. https://t.co/jfJoxIvc0y

It remains to be seen whether the recent crisis will impact the availability of Streamlabs Studio, which costs $5 a month, about R$27 in direct conversion, or $50 a year (R$276). The promotional page has already been changed.