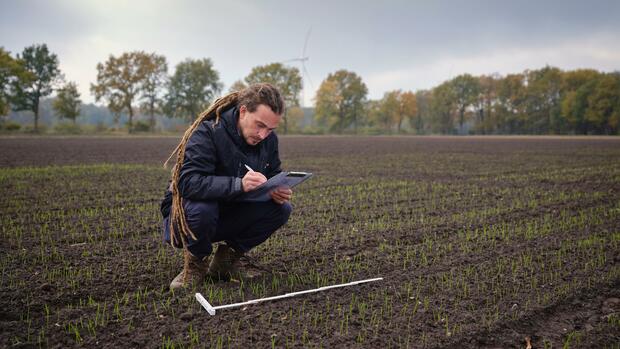 Osnabruck The seed of the future will be metallic blue, at least if the founders of Seedforward want it. The start-up from Osnabrück has developed a seed coating that is intended to make the grain more resistant to pests, but without chemicals – a kind of bio-glyphosate for the eco-conscious farmer.

And the eye-catcher color also has a practical effect: the seeds are clearly visible when checking the soil in the soil. “We are again dealing with the topic of hardware while many start-ups are implementing software. But new cultivation methods in the field cannot only be solved with software, ”says 30-year-old co-developer Jacob Bussmann.

There is still a lot of potential in agriculture for start-ups. But many lack access, says Bussmann, who was supposed to take over the family farm after studying agricultural science.

In the meantime, Seedforward has become a figurehead for what the Lower Saxony city of Osnabrück has in terms of successful Agtech start-ups. Agtech is about using technology to make agriculture, horticulture and aquaculture more sustainable and profitable.

Lower Saxony is well suited as an experimental field for innovations in the field, because the state has the second highest agricultural quota in Germany after Bavaria, but for example the lowest proportion of organic land in all federal states.

The eye-catcher color of the seed coating also has a practical effect: the seeds are clearly visible when checking the soil

At the same time, SMEs in the northwest have an interest in not missing out on future developments. Amazone, Grimme, Coppenrath & Wiese, Homann, Apetito – all these large companies from the fields of agricultural machinery and the food industry are based around Osnabrück. The region also self-confidently calls itself “Agrotech Valley” and, like the model name of Silicon Valley on the American west coast, wants to be become a center for innovation.

Family businesses that otherwise compete on the world market also come together. Such as the agricultural machinery manufacturers Claas and Krone. “Global corporations like John Deere are very busy with budgets that we simply don’t have. That is why it makes sense for us as small and medium-sized companies to network with one another on topics such as digitization, bundle competencies and use synergies, ”says Josef Horstmann, Technical Director of the Krone Group and Chairman of the Agrotech Valley Forum. Together they could do more.

For example, the six-million-euro research project “AgroNordwest”, which examines digitalization in agriculture, only went to Osnabrück because the family-owned companies had acted together, said Horstmann. Since its foundation two years ago, the Agrotech Valley Forum has brought 25 million euros in research funds to Osnabrück. These included the Agri-Gaia project with a funding value of ten million euros.

So far, the start-up scene has hardly conquered agriculture. Just 1.9 percent of German start-ups are concerned with agricultural solutions, while 10.6 percent are tinkering with innovations for food. Investments are still comparatively scarce.

According to the Agfunder 2020 industry report, 107 million US dollars were invested in this area in Germany last year. For comparison: it was 6.2 billion euros across all industries. And in France, the sector poured $ 346 million over the same period. Germany is in seventh place internationally.

The medium-sized businesses around Osnabrück want to accelerate growth and, at best, attract creative founders from the start-up cities of Berlin and Munich. 28 companies from the region have built the Seedhouse, a start-up accelerator in which prospective founders can test and develop their business ideas.

In line with the priorities of the local private sector, the start-ups must be active in the areas of agriculture and food. The founders have free office and laboratory space and benefit from the knowledge of the company. Later they can get regional companies on board as investors.

Seedforward was one of the first startups in the Seedhouse. Co-founder Bussmann appreciates the direct access to the family entrepreneurs. Christoph Grimme from the agricultural machinery manufacturer of the same name made contact with the Stroetmann Group, one of the largest seed dealers in Germany. Now the start-up is about to become a small medium-sized company itself. According to its own information, it will reach a turnover of two million euros in 2020 and 20 million euros next year.

With its competitors Grimme and Lemke, the medium-sized company Krone supports promising start-ups from the Osnabrück region.

The founders of the start-up Monitorfish have also moved to the seedhouse. You have developed a system that automatically monitors fish in aquaculture. Sensors analyze the water quality, while a camera system determines the mass, activity and health of the fish.

Now the founders want to transfer their tracking to poultry farming. To do this, they work with a regional chicken fattener. They measure the stress behavior of the animals and the biomass, i.e. the substance mass of the animals. From this, the breeder should conclude how much he has to feed.

The agricultural partner of the start-up is currently still using the technology for the chicken coop free of charge. For this, Monitorfish can train the algorithms with its poultry, co-founder Dominik Ewald explains: No customer pays for the development process of high-tech. “He only pays for finished solutions. That is why the first pilot customers like the chicken fattener are important. ”

If success finally arises, the technology could also be of interest to one of the seedhouse’s financiers, who is raising and slaughtering millions of chickens: Wiesenhof.

Germany’s largest poultry breeder and slaughterer Wiesenhof has invested in the Osnabrück start-up bug foundation, which is developing insect burgers.

Since its foundation in early 2017, Monitorfish has been financed with the help of various sponsors. One of them is the Osnabrück Aloys and Brigitte Coppenrath Foundation, which has already supported several start-ups, each with 200,000 euros and more. The foundation operates with ten million euros in capital from the legacy of the traditional frozen cake company Coppenrath & Wiese.

Young entrepreneurs should be encouraged and the start-up location expanded, says Felix Osterheider, the chairman of the foundation. “It is a down-to-earth region. Because of their fascination with their own ideas, start-ups should not lose sight of reality in order to gain a foothold and be able to grow continuously. “

The foundation also wants to bring founders and entrepreneurs together spatially. The Coppenrath Innovation Center is being built on the site of the former freight station – a 30 million euro project in which the city of Osnabrück and the state of Lower Saxony want to participate. The foundation pays a third of the costs. The German Research Center for Artificial Intelligence is to move here with its branch, as are the Agrotech Valley Forum and the Seedhouse.

Start-ups and small and medium-sized businesses would have to cooperate even more strongly, says Wolf Goertz from Osnabrück, who came up with the “Innovate” congress, at which family entrepreneurs, founders and researchers exchange ideas once a year in the city of Lower Saxony. Start-ups can present their ideas to the audience and win the most convincing ones.

Goertz also founded Foodsupply, a start-up that builds a virtual marketplace for buyers and suppliers in the food industry. One of the largest bakery companies in Northern Germany, the Junge bakery, wants to use the software in the future and invests.

“We deliberately did not include any venture capitalists, only small and medium-sized investors. We don’t want to become a corporate project or a soulless management company, ”says the 36-year-old, who has so far been able to collect half a million euros. The fact that Osnabrück start-ups can draw investors’ attention with unusual food ideas was first demonstrated by the bug foundation, which developed Germany’s first burger made of insect meat. In 2018, the PHW group, to which Wiesenhof belongs, got involved and took a nine percent stake. “We thought a lot about whether Wiesenhof should join us, since we deliberately want to create an alternative to meat,” says co-founder Max Krämer.

But in the end, the partnership would have advantages for the start-up: “We can fall back on the company’s infrastructure and get specific tips for operational business. You don’t normally have that with a venture capital investor, ”says Krämer.

So far, however, customers have not had a taste for it. The insect burgers flew from the range of 1500 supermarkets. But Wiesenhof and the Bugfoundation continue to believe in the collaboration: “Insect protein is a new market where we cannot yet assess whether it will be successful,” says Wolfgang Heinzl, Head of Business Development at the PHW Group. That is also a learning process. The restart should take place this year – with a modified recipe.

More: This May had the lowest rainfall in 120 years. The extreme drought poses great challenges for farmers.