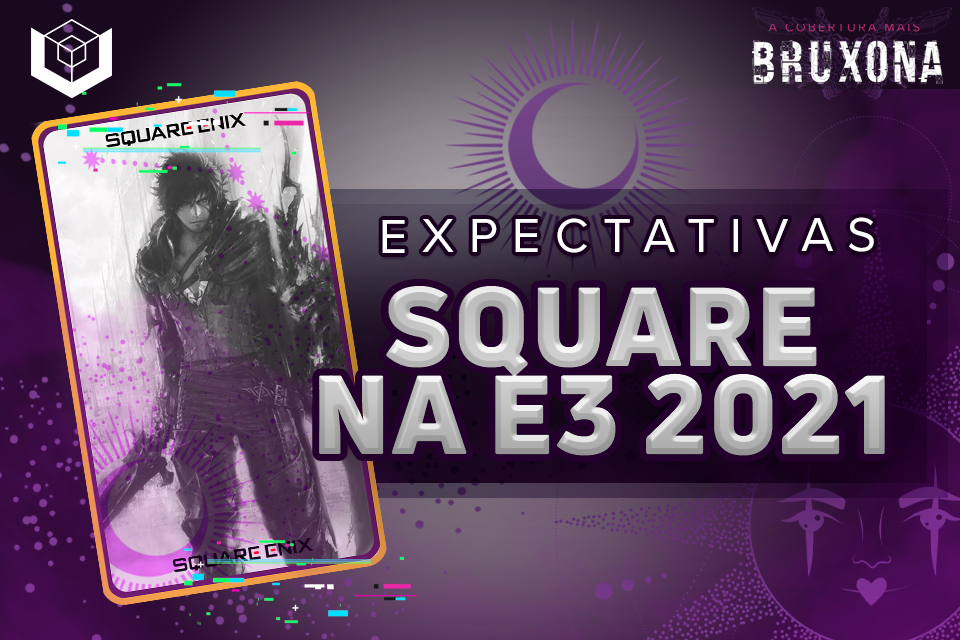 E3 2021 revealed its full calendar, and now we know that producer Square Enix will have its own conference on June 13th, at 4:15 pm EDT! Among some information already confirmed and many rumors, there are reasons for your fans to be excited and eagerly awaiting the date.

With that in mind, we’ve prepared this guide with everything you should expect — or not! — from the veteran company at this year’s E3. Check it out below and cross your fingers for the reveal of your favorite game!

what has already been confirmed

On June 3, Square Enix itself went to Twitter to recall the date of its conference and announce that we will have new information from Babylons Fall, the game made in partnership with Platinum Games, a deeper dive into Life is Strange True Colors, and the world premiere of a completely new project by Eidos Montreal:

From the image, we also know that Marvel’s Avengers will have some space there, maybe with some information about the expansion War for Wakanda, focused on the Black Panther? The producer had already promised that this content will include the new villain Klaw, a new story, new Wakanda biome, costumes inspired by Marvel’s cinematic universe and adjustments to the heroes’ power limit.

Unveiled in March of this year, Life is Strange: True Colors it already has a scheduled release date, and will arrive in our homes on September 10, 2021 as a complete game, abandoning the old structure of separate episodes. So, it’s to be expected that we’ll see a lot of unprecedented gameplay for this title at the conference.

Looks like Eidos Montreal’s Guardians of the Galaxy video game will be Square’s big E3 showcase this year https://t.co/DA9VnQcUVF

The Eidos Montreal project, on the other hand, brings more questions than answers. Fans have long theorized and rooted for the franchise to come back Deus Ex, but this unfortunately still seems pretty unlikely to roll. According to respected journalist Jason Schreier, the best bet is that the flagship of the night will be the video game adaptation of the Guardians of the Galaxy.

as to Babylon’s Fall, after a discreet announcement at E3 2018, it was shown to the public in more detail at a Sony State of Play in late 2019. The coronavirus pandemic ended up delaying the game’s development somewhat, but the team guarantees that the project it keeps advancing, and after these mishaps, this year’s fair looks like the perfect chance to see more of the title in action!

At the end of last month, Square Enix held a commemorative event for the franchise’s 35th anniversary. Dragon quest and there announced the next major numbered chapter of the series, with a brief teaser trailer for Dragon Quest XII. As only its logo was revealed, it seems highly unlikely that the subject will be taken up again at E3, but who knows?

And since we are in the field of JRPGs, it is worth remembering that Final Fantasy also had an event recently! During the Final Fantasy XIV Fan Festival, it was said that the expansion endwalker will be released on November 23 this year. On the one hand, E3 would be a great chance to delve deeply into this content. But on the other hand, it’s strange to imagine the game returning to the spotlight shortly after the Japanese event.

The fact is that this MMORPG is becoming more and more popular and acclaimed, and considering E3’s western appeal, there’s a good way to get the public’s attention: if the game does appear there, it’s easy to imagine the potential of an action joint with Microsoft to take the title beyond the PC and PlayStation, now into the green pastures of Xbox systems.

Depending on the size of the conference at E3, it seems more likely that we will have some news about the next steps in Final Fantasy VII Remake, which will have released Yuffie’s DLC and its version INTERgrade just before the fair starts. It would be nice to see the title, previously exclusive to the PlayStation, being announced for other platforms, as its temporary exclusivity ends in December.

And it’s also worth remembering that the latest trailer for Final Fantasy XVI was shown over eight months ago, so it’s not unreasonable to imagine that a little more material can already be shown to fans. Just don’t be surprised if, instead, another rumor turns out to be true: lots of insiders have been talking about Final Fantasy Origin, an action game in the best style souls and Nioh!

Although we don’t have anything official about it yet, there’s no better opportunity to reveal a new project to the public than at the most relevant video game fair in the world, right? Incidentally, the E3 2021 also looks like a golden chance to show off some additional content for Outriders. Released earlier this year, the shooter seems lacking in more content and the reveal of a DLC would be a great fit for the fair!

Square Enix has also been quite receptive to the idea of ​​remastering their more classic RPGs or even releasing new chapters for acclaimed games. Announced in February this year, Legend of Mana will get a nice remake shortly after the fair, and there are still plenty of games from the 8-bit to 32-bit generations that could get the same treatment.

At the end of last year we also had the Collection of Saga putting together the games of Final Fantasy Legend, a good alternative to release old games without having to do a full remake. Any initiative in this direction would certainly make many fans happy!

And in closing, Neo: The World Ends With You it’s slated for release on July 27th, so it’s likely to be remembered if not at the Square conference, at least at the Nintendo Direct broadcast. But that’s already a topic for our Big N E3 special…

Among all these games, which are you most looking forward to seeing new stuff? Did we forget to quote a title? How are your expectations? Let us know in the comments below!