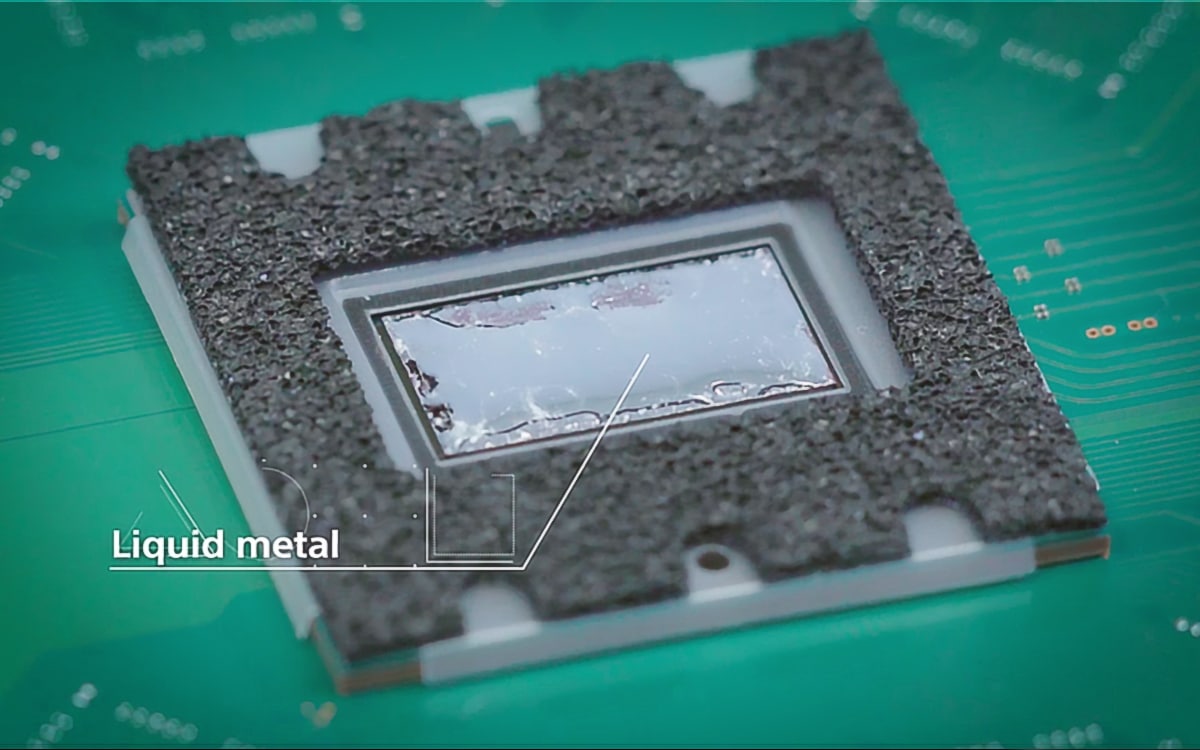 Sony revealed during a teardown of the PS5 that the console used liquid metal instead of thermal paste on the console chip. A choice that allows a better interface between the chip and the cooling solution to increase its efficiency significantly. Even though it wasn’t as easy to implement as it looks.

The info was discovered during the first PS5 teardown video. Sony’s new console no longer uses thermal paste to interface its SoC with heat pipes and other radiators, but liquid metal. As you know processors give off a lot of heat, and as the power of consoles increases, the issue of heat dissipation becomes central. Engineers have several options for this: fans, copper masses, heat pipes and other very thermally conductive materials, radiators, steam chamber … But to get the most out of a heat dissipation solution, the question arises.interface between components, especially between the SoC and the cooling solution.

As a general rule, both PCs and consoles use a type of material that is as well known as it is mastered: thermal pastes. This is a somewhat thick paste that must be affixed to the die in a certain amount. Thermal pastes generally have a few very desirable common characteristics: they do not flow, do not conduct electricity, and they do not attack surrounding materials. While being quite efficient at conducting thermal energy. Gold in recent years, overclocking enthusiasts have often opted for another type of thermal paste: liquid metal alloys.

PS5: liquid metal allows Sony to get the most out of its cooling solution

This type of interface transmits heat better, because not only do these alloys better match the surfaces to be interfaced, but they also have a better thermal gradient which allows the whole to gain significantly in efficiency. In applications where the number of constraints weighing on heat dissipation is high, playing on thermal paste makes it possible to push conventional cooling solutions to their limits – and thus avoid opting for much more expensive solutions, such as for example a steam chamber like on Xbox One X.

Sony engineer Yasuhiro Ootori explained: “the PS5’s SoC is a tiny die clocked at a very high frequency. This leads to a very high thermal density in the silicon die, which required significantly increasing the performance of the thermal conductor otherwise known by the acronym TIM, between the SoC and the heat sink.“. And to add: “the PS5 uses liquid metal to ensure high, stable, and long-term cooling performance“. Of course, this is not Sony’s only trick to ensure optimal cooling. For example, the firm has opted for a larger format which leaves more room for a larger dissipation solution.

But by adding liquid metal to that in the PS5, Sony was able to do without a steam chamber that could have driven up the price of the console, without ensuring such optimal dissipation. Still, the choice of Sony is far from trivial and posed some challenges that the builder had to solve. First, unlike a thermal paste which is, as its name suggests, a solid paste, liquid metal is … liquid.

Liquid metal in the PS5 represents an industrial challenge

It is therefore necessary to put very little to “wet” the component without excess. But that’s not all because this amalgam has another defect: it conducts electricity. If this does not really pose a problem for amateurs who themselves replace the thermal paste of their machine with liquid metal, it is more difficult to integrate this material into industrial production processes.

Otherwise, production output will be drastically reduced and the failure rate will increase. And that’s not all : liquid metal has a destructive effect on some metals. It can in fact slip into the metal structure reducing the mechanical properties of the assembly to nothing. We therefore understand the engineer from Sony when the latter launches: “The adoption of this liquid metal cooling mechanism took us two years. What allowed us to conduct many tests“. In fact, by bringing the PS5 to market, Sony is the first company to launch a consumer product containing liquid metal.

What perhaps help the firm to win the war of consoles, at least in the field of innovation. Other manufacturers should soon follow suit. Asus notably revealed that ROG PCs containing liquid metal would be marketed by the end of the year.