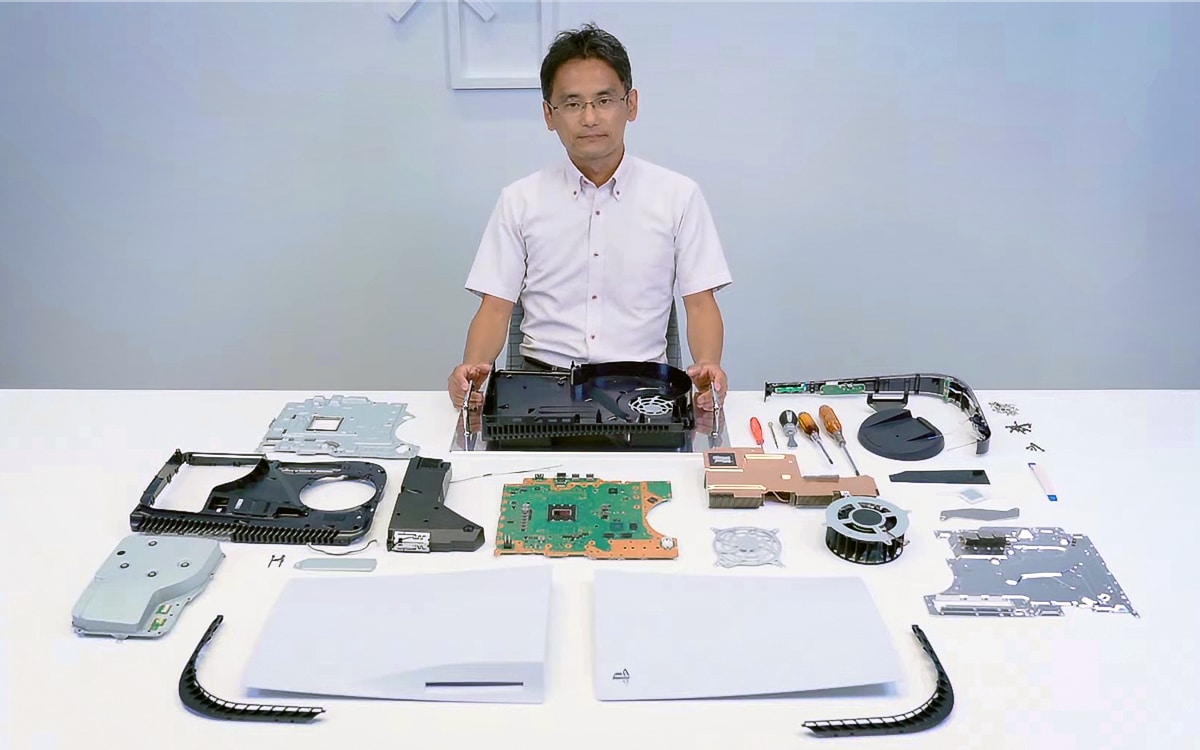 The PS5 is finally entitled to its first official teardown video. We discover that the shell is very easy to change without tools. The device is very modular which should facilitate repairs. The console’s SoC is thermally connected to the massive cooling solution with a particularly conductive liquid metal.

The video begins with a Warning : “For information purposes only. Do not imitate. Risk of exposure to laser radiation, electric shock or other injury. Disassembling your PS5 voids the manufacturer’s warranty“. Which could have made us fear that the new Sony console would be an impenetrable fortress, like an Apple product for example.

But we are quickly reassured. The video, without music, gets to the point: the engineer Yashuhiro Ootori, the PS5, a refined decor, and that’s it. The first info is the exact device dimensions: 104 x 390 x 260 mm. It’s significantly larger than the dimensions of the PS4 (53 x 305 x 275 mm) – but Yashuhiro Ootori points out that this choice comes with a much better energy dissipation and particularly quiet operation. At the front, the console has a USB Type C (SuperSpeed ​​10 Gbps) port and a USB-A (Hi-Speed) port.

Sony unveils the first teardown of the PS5

At the rear there are two USB-A ports (SuperSpeed ​​10 Gbps), a LAN port (1 GbE), an HDMI port and a power port. The air enters on either side of the black core at the front and exits through grilles on almost the entire rear face. Disassembly begins with removing the foot under the console. First observation: Sony has caring ergonomists in its teams. The base is held by a single screw. An injection molded housing helps keep the screw secure in the base.

Also there is a handy little pad to plug the screw hole when the base is not installed. The base itself clips onto one of the two panels to make the device stable when placed horizontally on the table. Second surprise: the wavy white panels on the sides are simply clipped. Users can very easily remove (and replace) them without any screws. Which seems to go in the direction of a strong customization of the console. Without its side panels, the “heart” of the console is then exposed. Or almost.

It’s the only level of disassembly authorized for users, and most of the most fragile components such as the motherboard are hidden by a protection that only allows access to what is strictly necessary. There are in particular two “dust traps” which make it easy to clean the console with a vacuum cleaner. The engineer also shows the M.2 PCIe 4.0 slot, also very easy to access to add memory. This is when the real teardown (the one that Sony reserves for its technicians) begins.

The screws are hidden under stickers that we guess secure (therefore leaving traces when not removed by a professional). After removing the fans, the innards of the console reveal themselves. We realize that Sony has done everything to make the device as modular as possible. Each element is disconnected (and therefore seems to be changed) very easily. This is the case of the fan, disk drive, and power supply (350W). The motherboard is hardly more complicated to remove.

This is protected by a shield on the top. Sony gives back in passing some technical data. The CPU has 8 cores and 16 threads and can run at frequencies up to 3.5 GHz. It also shows the 16 GB GDDR6 RAM which have a large memory bandwidth of 448 Gbps. Or the SSD and its controller soldered to the motherboard – with a bandwidth up to 5.5 Gbps to reduce loading times to seconds. Sony also unveils a detail: instead of the usual paste, Sony now uses a liquid metal alloy to improve heat conduction between the SoC and the radiator.

Liquid metal alloys are sometimes used by enthusiasts looking for extreme performance. The alloy nevertheless has the drawback of being incompatible with certain materials. Sony explains that it took 2 years for its engineers to adapt the device to this alloy. The massive cooling solution is located at the rear. It seems to represent an area almost equivalent to that of the motherboard. She would have the “Same performance as a steam chamber system”.

We invite you to discover the complete disassembly of the console in the video: