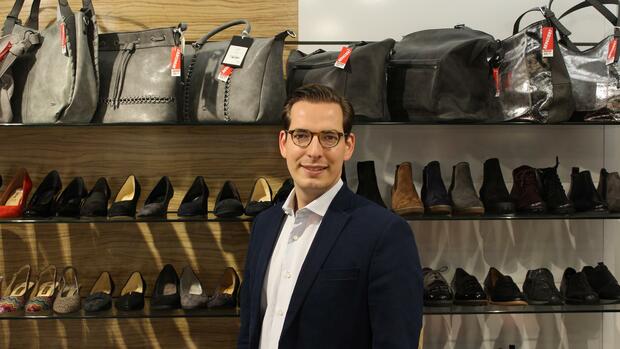 Dusseldorf Dominik Benner had never dreamed of a career as a shoe dealer. After studying economics, he only worked for Bilfinger Berger. Then he became managing director of the energy start-up Juwi. His area of ​​expertise was – and still is – real estate management.

But his father died unexpectedly in 2012. And so Benner not only inherited five shoe stores, but also responsibility for a company founded in 1882 with 70 employees at the time. He could not avoid this obligation.

It quickly became clear to him that it was not enough to continue the family business in exactly the same way in the fifth generation. When he was experimenting with selling shoes online, other retailers approached him who were also looking for a way into e-commerce. He developed the online platform Schuhe24, through which more than 2000 specialty shops sell today.

In 2015 he was presented by the Minister of Economy Tarek Al-Wazir with the founder award of the State of Hesse. In 2018 he was named “Entrepreneur of the Year” by EY. But it is only in the corona crisis that it becomes clear how vital the step to the platform was. In the past three months, sales of shoes24 have doubled.

The original plan was to increase sales in the platform business from EUR 75 to 100 million this year. “Now I’m assuming that there will be more,” Benner says. The inquiries from stationary retailers who wanted to be added to the platform could hardly be dealt with.

Many have suffered massive losses as a result of the corona crisis and are now looking for new sales channels. “We have newly connected 500 branches in the past three months. In terms of personnel, this almost pushed us to the limit, ”reports the entrepreneur. The flood of inquiries from new interested parties is only slowly ebbing away.

“The corona crisis was a wake-up call for many retailers who are still relying too little or not on e-commerce,” says the Shoes24 boss. It is still not too late for a new start in online trading. “Our goal is for local retailers to get a larger piece of the large online cake.”

Live on up to 50 channels simultaneously

Benner is not limited to shoes. Textiles, bags, sporting goods and jewelry are also part of the offer, which is sold on its own website, but also on platforms such as Amazon, Ebay or Real. Shoes24 thus avoids a problem that many shopping platforms founded by local dealers or local authorities have: the insufficient range.

The connected dealers can simultaneously go live on up to 50 channels. Shoes24 takes over the entire process from data maintenance and payment processing to answering customer inquiries and receives part of the turnover for this.

When businesses had to close due to the pandemic, many looked at online retail as a supposed crisis winner with a mixture of envy and suspicion. Eckhard Schwarzer, president of the Mittelstandsverbund, called for a recapitalization program as part of the economic stimulus package because he feared that online trading would again have an advantage and competition would be further distorted. Drugstore entrepreneur Raoul Roßmann even called for online retailers to be excluded from the planned VAT cut.

Benner has little to do with such front positions. “I don’t believe in seeing online retail as an opponent,” says the 37-year-old. If a dealer sells online in parallel, the branch also benefits.

The reconciliation of the branch and online trade is also reflected in his advisory board. Heinrich Traude, managing director of Klauser Schuhe, one of the largest traditional shoe retailers in Germany, is located there. Jens Wasel, founder of KW Commerce, one of the Amazon Marketplace retailers with the highest sales worldwide, is also located there.

And online entrepreneur Benner also emphasizes: “My heart is dependent on brick-and-mortar retail.” And the amateur pilot can also prove this: he has now expanded the branch network inherited from his father to eleven stores.

More: Medium-sized retailers suffer so much in the corona crisis