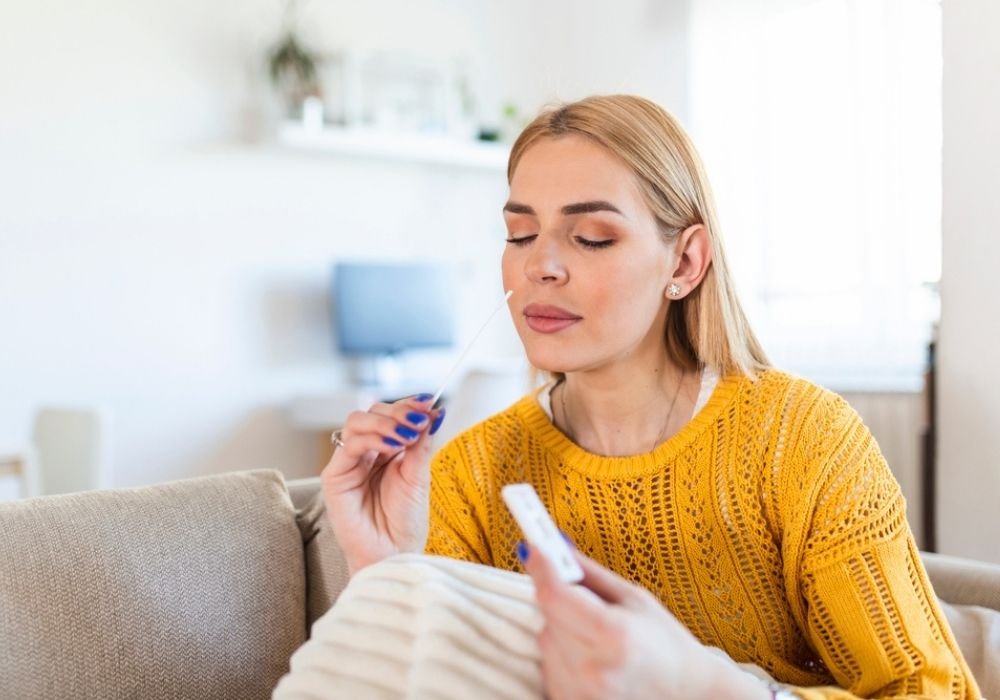 After 2 years of pandemicANVISA finally released the use of self-tests for covid-19which expands the detection capacity of potentially transmitting cases and significantly reduces underreporting.

Why did it take so long?

Initially, there was a flawed understanding of the role of PCR and of antigen. Taken as the “gold standard”, the bet was made in the PCR tests. And therein lies the first mistake. PCR is far from a gold standard. To have this seal, it should have 100% sensitivity and 100% specificity. It doesn’t. A meta-analysis that evaluated the sensitivity of the method concluded that up to 54% of the results may be false negatives, despite the high heterogeneity of the studies. (1).

However, even with these limitations, PCR is still the most sensitive among the different methods available to identify a case of Covid-19. That is, it is the option of choice from the individual point of view, as it is what they have the highest probability of detecting a case.

In the second case, there are 200,000 tests available. Considering that the indications for mild or even asymptomatic cases are expanded, the average pre-test probability will be around 5%. In this way, 7 thousand cases will be identified, 7 to 14% of the total, almost double the previous strategy. If the pretest probability is 100%, all cases would be detected. Therefore the potential population sensitivity is 100%.

These examples of positivity rates were drawn from real examples of countries that opted for different strategies (2). The graphs below represent the dynamics of tests, positivity, cumulative incidence rate of cases and deaths in Colombia and Denmark. There is no description of the type of test performed, but it is possible to verify the effect of scaling power.

Realize that, to expand the capacity to identify cases by 4x, it was necessary to expand the number of tests 16x. The relationship between deaths and identified cases clearly demonstrates that the proportion of underdiagnosis was much higher in Colombia compared to Denmark. 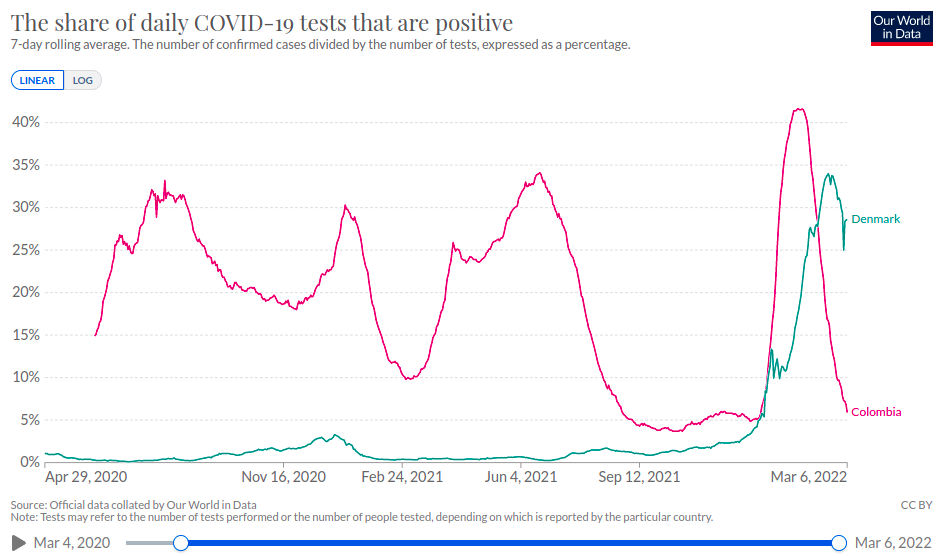 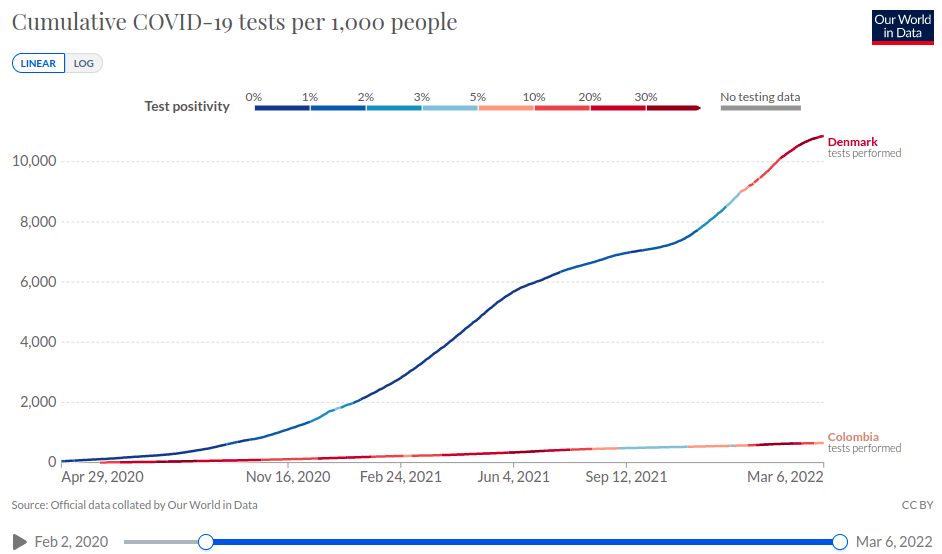 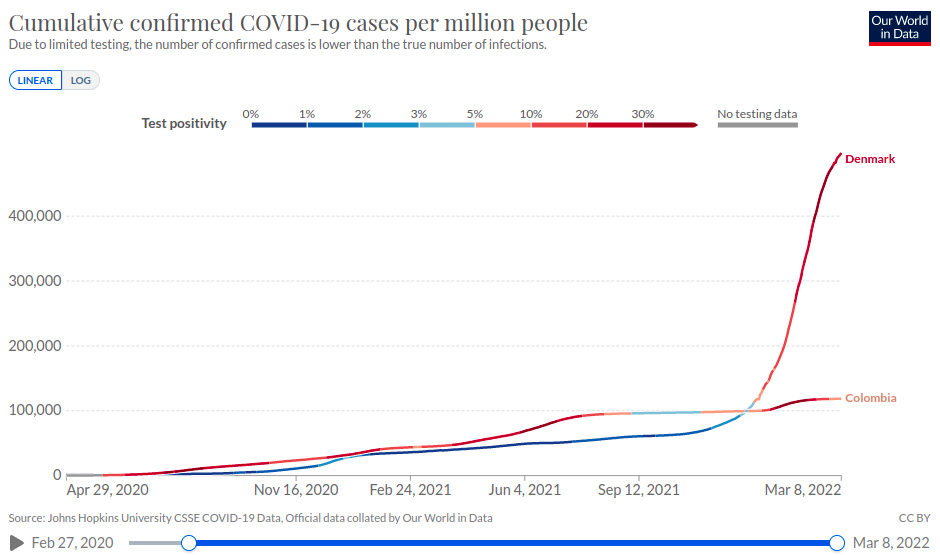 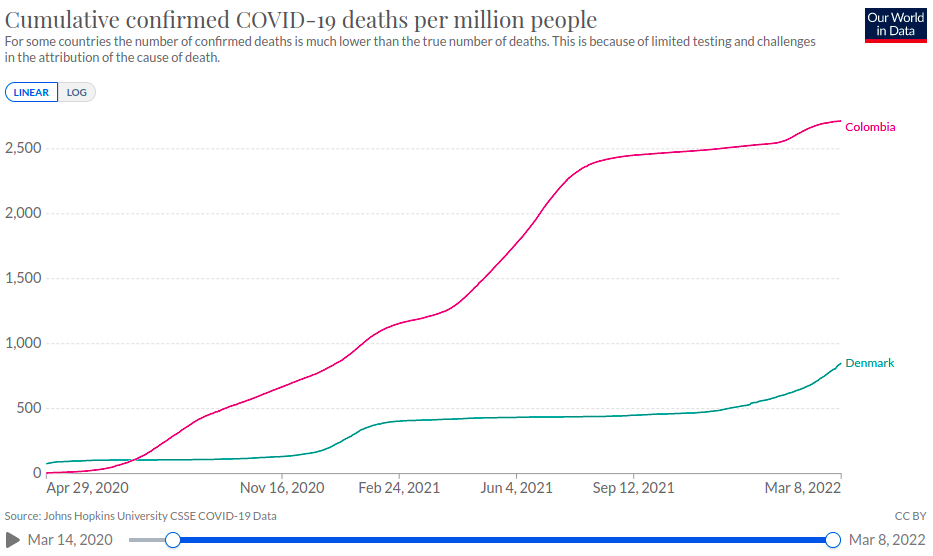 This example demonstrates the power of testing scale. Antigen tests are much more easily scalable by definition. These tests are independent of a large laboratory structure and are much cheaper than molecular tests. Even with reduced sensitivity to identify a case, the power of the scale handily counterbalances this limitation. (4).

Returning to the initial question raised, at the beginning of the pandemic there was not a proper understanding of these characteristics and limitations of each methodology and the impact they would bring to the testing strategy. This led to an overestimation of individual analytical sensitivity and an underestimation of the power of the scale, leading to a false impression that every effort should be made to encourage PCR testing. Over time, these perceptions gradually adapted to reality and more and more investments were mobilized for antigen tests.

Another highly relevant point that should be discussed is which analytical sensitivity we are dealing with. When talking about reduced analytical sensitivity of Antigen compared to PCR, this is based on the ability to detect cases. That makes perfect sense. But when it comes to population benefit, this is not the most important point. The main objective is to detect transmitting individuals, as it is in this group that there is potential to reduce transmissions. In this respect, the difference in analytical sensitivity between PCR and Antigen is even smaller. One study demonstrated a greater correlation of the Antigen with the viral culture, compared to PCR (3). Viral culture is the true gold standard in identifying viable cases.

Finally we come to the self-tests. In addition to the benefits already mentioned, the antigen tests can reach the point of being done by the individual, without the need for a health professional directly involved in the process. This further increases access and scalability. Maximizes the potential for population sensitivity.

Some may question whether the collection technique performed by the patient can impact analytical sensitivity. The answer is yes, it does. But it is already known that the increase in scale far outweighs this drop. These concepts have been known since 2020/2021 and incorporated by countries that are open to innovation, such as Germany, France and other European countries. The UK was a pioneer in sending home tests, subsidized by the government. Subsequently, the US incorporated the same strategy. And Brazil, better late than never, took the first step in this direction. There is still a need for more incisive action on the part of the government.

If the strategy aims to increase population sensitivity, which will increase the ability to detect transmitting cases that, in turn, will isolate and transmit the virus less, reducing viral transmissibility and total deaths, it would be logical for these tests to be stimulated to the point of be subsidized by the government. This subsidy fell far short of the real need for scale.

Now, this concept does not just apply to Covid-19, but to every highly prevalent and underdiagnosed disease. Let’s look at some examples:

The current model of the global health system regarding laboratory tests, in general, is simply not enough. It is a strategic bottleneck, as it refers to the basis of the entire process, which is the diagnosis. Without diagnosis, there is no treatment. Without treatment, complications, hospitalizations, and deaths occur, with the economic and social costs linked to this.

Self-tests applied to these and other relevant diseases can be a game changer and significantly decrease the unacceptable proportion of underdiagnosis. But for it to really make a difference, it must be available to everyone, not just a part of the population.

Another critical concept is the regulatory aspect. It is clear that the variables that define a public health strategy are different from those established for individual care. Today there is no such discrimination and in many situations they are evaluated by the same ruler, which is inappropriate. This partly explains the delay in the incorporation of antigen tests and self-tests in Brazil. It is hoped that Covid-19 will leave a positive legacy in this regard and that we can take advantage of the maximum potential that self-tests can offer us.

***
Bernardo Almeida is an infectious disease physician and Chief Medical Officer at Hilab, a healthtech that developed Hilab, the first decentralized laboratory using remote laboratory tests. He is a specialist in infectology at the Federal University of Paraná (UFPR), with a residency in internal medicine and internal medicine at Hospital de Clínicas — UFPR and in infectology at Hospital de Clínicas — UFPR, currently studying for a master’s degree at UFPR in internal medicine, area of ​​infectious diseases. — Epidemiology of severe acute respiratory syndromes in adults. He has experience in the field of medicine, with an emphasis on clinical medicine and infectious and parasitic diseases, and participates in a research group in the area of ​​respiratory viruses.