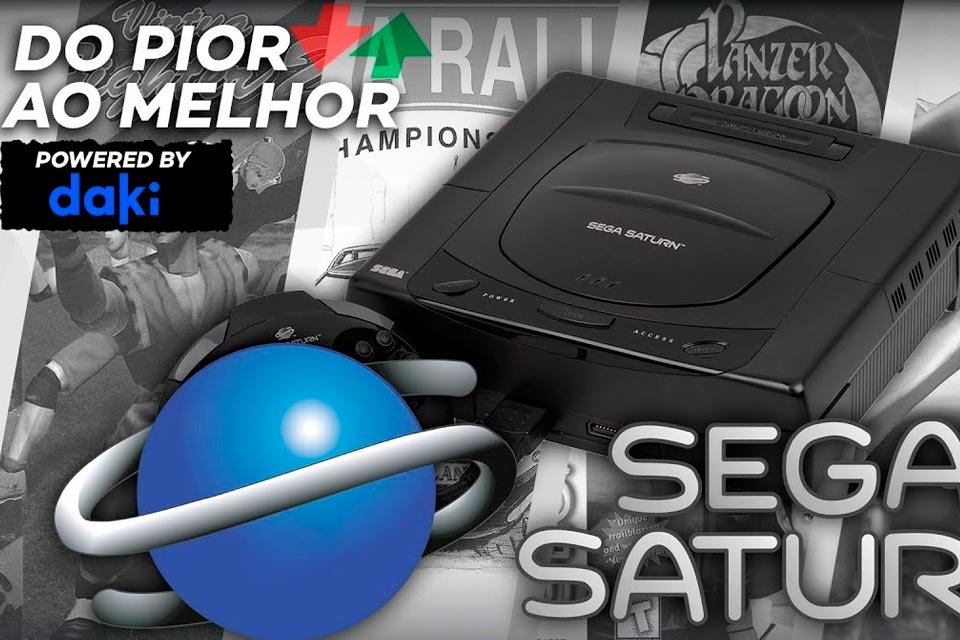 Sega was one of the biggest video game companies between the late 80s and mid 90s. Facing Nintendo, several console wars were fought with the goal of being the market leader.

But everything changed in 1996. The company launched its new video game, saw a new competitor emerge and ended up being left behind, having to chase the loss. Still, a lot of good and bad games were released, so let’s give them a moral. Welcome to another episode of the Worst to the Best of consoles with Sega Saturn. Here are our criteria, pay close attention:

Let’s start with the ghastly ones then!

Released in 1995, Iron Man / X-O Manowar in Heavy Metal joins Tony Stark along with Valiant Comics hero XO Manowar to face a group of supervillains who are in search of the lost fragments of the Cosmic Cube.

The player can choose which of the two heroes to control, both of which do basically the same things and it can be completed cooperatively together with another player. At the beginning of each mission, specific objectives are presented that must be completed to advance the story.

The title was described by analysts as a complete disappointment. It’s repetitive, its soundtrack is weak, and the graphics are pretty dated. 6 more months of development would likely have positively impacted the final result.

Robotics, launched in 1995, is an FPS located in the year 2877 in a world run by a single government called the World Silent Security Service which, even restoring peace after several political intrigues centuries ago, displeases part of the population, which leads to the emergence of a rebel group that is willing to stand up to him.

The gameplay takes place inside the Deadalus space station on several randomly generated floors. To advance, you need a card that is hidden somewhere in the area. Within the arsenal available to the player there are laser weapons, missile launchers and even their own hands, and it is possible to upgrade each of them.

The game was criticized for its generic environments, little variety of enemies, repetitive gameplay and lack of an appropriate soundtrack. Basically he brought up an interesting idea, but the developer didn’t know how to work it.

Revolution X, initially released in 1994, is a rail shooter developed by Midway, the same as Mortal Kombat. In the story, the protagonist went to a club to see a concert by the band Aerosmith, but the musicians are captured by the evil force New Order Nation in the middle of the show and it’s up to the player to save them and put an end to the evil tyrants.

As you’d expect from a rail shooter, there’s nothing fancy about the gameplay. Among the locations present in the title, we have the Amazon forest, the Middle East and even the Wembley Stadium, famous football stadium in England.

The Sega Saturn version of the title, released a year after Arcade, was described as extremely monotonous, with extremely long boss battles and a dumb design in terms of where enemies appear. The success he had in arcades ended up not being repeated in players’ homes.

Released in 1995 (difficult year this), Virtual Hydlide is a remake of Hydlide, a classic mid-80s RPG, but with 3D graphics and a digitized character of a real actor.

Much of the gameplay takes place inside dungeons, in which the player must defeat enemies to level up skills and look for weapons and armor. Every time a new game is started, a different world is generated, having a total of 20 different maps for the main area.

It turned out that the title didn’t please reviewers, who described its gameplay as tedious, awkward camera angles, grainy imagery, dated sound effects, and fickle difficulty. It’s better to keep the original.

Batman Forever, released in 1996, is a bat ’em up beat ’em up based on the movie of the same name, the one with Jim Carrey as Riddler and Tommy Lee Jones as Two Face that hit theaters a year earlier.

The player can control both Batman and Robin and defeat all enemies that appear on the screen, using weapons and special attacks for that. The game features a mode for two players, and it is even possible to use the same character, if you want.

A bad game based on a bad movie. Analysts criticized the extremely repetitive gameplay, character graphics and lack of animation frames. This time it didn’t give to the Dark Knight.

Street Fighter: The Movie, released in 1995, is based on the film that is at best inspired by the fighting game franchise. Street Fighter. The game brings the actors of the feature film digitized as the fighters in a gameplay similar to that of Super Street Fighter II Turbo.

Analysts complained a lot about the huge amount of slowdowns, the weird controls, the stuck animation, the short recovery time for the characters, the poor voice work and the fact that it is a copy of SF 2 Turbo with different graphics. He definitely didn’t like it one bit.

And to close the worst, another one released in 1995. Battle Monsters is a fighting game with digitized actors, just like Mortal Kombat, which brings 12 different characters to beat each other.

Without much fuss: the game is horrible! Controls are complex, animations are stuck, sprites have weird pixelation, and graphics are a little stretched. The idea didn’t sound so bad, but the execution was just awful.

Now, let’s move on to the best.

Virtua Fighter 2 is a fighting game released in 1994 that has no plot, but pits 11 different fighters to face off in a martial tournament in which the strongest will come out the winner.

Like its predecessor, it is in three dimensions, there is a way to win by throwing the opponent out of the scene, the size of the combat area is customizable, the fighters have fighting styles based on real martial arts but they all share some specific moves.

The Sega Saturn version was highly praised for its gameplay improvements, stunning graphics and use of motion capture, as this was one of the first video game games to use the technology. Those who like to fight will surely never forget this classic.

Guardian Heroes, released in 1996, is a 2D beat ’em up that follows 4 warriors Ginjirou, Han, Nicole and Randy in a story full of choices, ramifications and karma, all defined according to their actions.

During gameplay, the player earns experience points that can be used for better six attributes: strength, vitality, intelligence, mentality, agility and luck. In addition to the campaign, there is also a versus mode that puts up to six players to face each other in two types of battles.

The game was highly praised for its ramified story, its high difficulty, combos during battles and versus mode, being described as the successor to Streets of Rage e Golden Axe. But not everything is perfect, as its graphics were treated as too simple for that generation of consoles. Beauty is in the eye of the beholder!

And we also have here Saturn Bomberman, released in 1996. Its story mode can be played in one or two players, requiring you to kill all opponents and destroy the red orbs on the map, known as Zarfs.

Its Battle mode supports up to 10 players using two multitaps, which are control hubs for the Sega Saturn. The American version of the title supports Sega Netlink, which allows online games for up to 4 players, two per video game.

The title was highly praised for its gameplay for up to ten people, its accessibility and the various modes present, but criticized for not being as good as previous games.

Radiant Silvergun, released in 1998, is a shoot ’em up in which players assume the role of a team of war pilots who are battling mysterious enemies who are being created by a crystal just as mysterious.

The player has a very large arsenal of weapons that must be used strategically, as each stage has its particularities and each equipment will bring an advantage and disadvantage. The score is calculated based on the enemies’ color, which is also linked to their power.

The Sega Saturn version was a complete critical success, with the game being described as the best shoot ’em up ever made for its extremely polished and fun gameplay, creative bosses and also for pushing the console to the limit of its graphical capabilities.

From a spaceship game to a car game. Sega Rally Championship, first released in 1994, puts the player to compete in races off conventional tracks, but in deserts, forests and mountains.

The main highlight of the game is the difference in gameplay between the scenarios, since each of them have different friction properties, which requires players to have specific knowledge for racing in different locations. The title features three different cars, being the Lancia Stratos HF unlockable.

On Sega Saturn, the game was a complete success. Gorgeous visuals, responsive controls and realistic physics were some of the many accolades it received, being described as a milestone in the video game market.

Panzer Dragoon Saga, released in 1998, was Sega’s attempt to take on the franchise. Final Fantasy, exclusive to the competing PlayStation console. In the story, the player plays the role of young Edge, a mercenary who, along with his dragon, helps a mysterious young woman from a civilization that no longer exists.

As you can imagine, it is an RPG that has the conventions of the genre, like random encounters and skill tree, but differentiates itself by bringing elements to the shooting gameplay of its predecessors along with voice work.

The title is considered one of the best released for the Sega console. He was mainly praised for the thrilling story, the beautiful graphics and the fun combat. As many people have never heard of this classic, here is the recommendation.

We would definitely be cursed if this game didn’t have it here. NiGHTS Into Dreams, released in 1996, follows young Elliot Edwards and Claris Sinclair as they enter the dream world Nightopia, aiming to stop the evil Wizeman, who aims to destroy both Nightopia and the real world.

The game has seven levels divided between the two protagonists that feature different visuals, opponents and obstacles, each of them with fights against bosses at the end. The title sounds pretty cute and simple, but Sonic Team’s developers have done research on REM sleep and studied the theories of psychoanalysts Carl Jung and Sigmund Freud.

All the work involved with it ended up paying off, as the title is one of the most memorable among fans of the console. It was highly praised for its graphics, gameplay and soundtrack, consistently appearing on lists of best games ever made. Success defines!