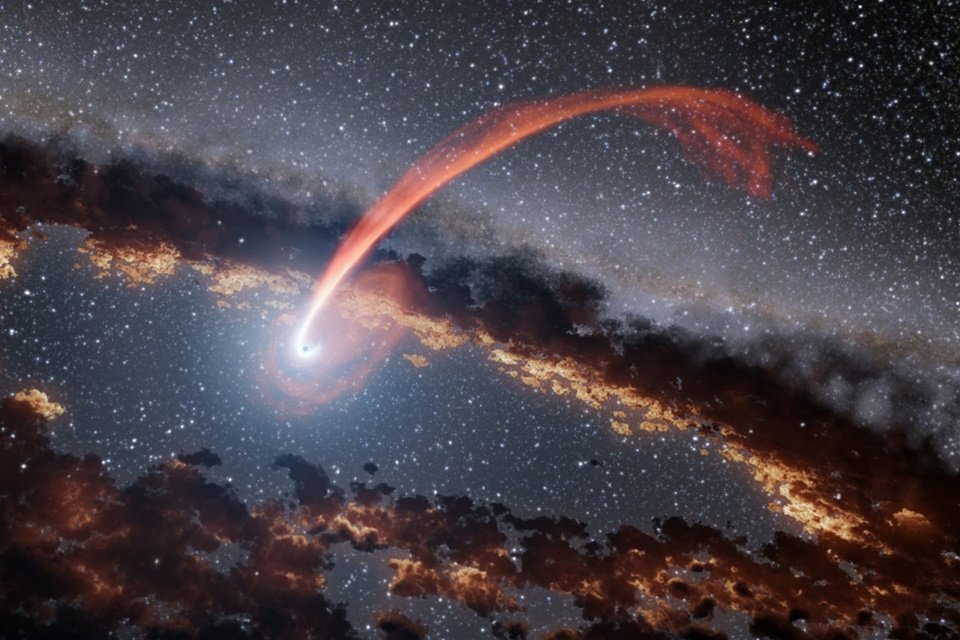 Have you ever thought about what happens when a black hole pulls a star into it? You probably imagined the poor star disappearing without a trace, right? It turns out that when a black hole engulfs such a large star, it actually produces what astronomers call a “tidal disturbance event” — a giant burst of radiation capable of obscuring the light of all the stars in the host galaxy. black hole for months or even years.

A team of astronomers led by Sixiang Wen, PhD. from the Steward Observatory at the University of Arizona (United States), published an article in the journal. The Astrophysical Journal about one of these events. They used X-rays emitted by a tidal perturbation known as J2150 to measure the mass and rotation of an intermediate-mass black hole. It has a low mass for a black hole: “only” about 10,000 times the mass of the sun.

Ann Zabludoff, professor of astronomy at the University of Arizona and co-author of the article, explained in a university press release that by analyzing the eruption, the team was able to better understand intermediate-mass black holes — less studied than supermassives — that , according to the scientist, “may be responsible for most black holes at the center of galaxies”.

Why is studying these events important?

Although dozens of tidal perturbation events have been seen at the centers of large galaxies that have supermassive black holes — equal to or larger than our Milky Way — previous data has never been detailed enough to prove that a glare from a tidal perturbation can occur. individual tide fed by an intermediate black hole.

“We still know very little about the existence of black holes at the center of galaxies smaller than the Milky Way,” co-author Peter Jonker of the University of Radboud in the Netherlands said in the same statement. “Due to observational limitations, it is a challenge to discover central black holes much smaller than a million solar masses,” explained the scientist.

The measurement of spin – rate of rotation of a black hole – performed in the study allows astrophysicists to test hypotheses about the nature of dark matter, which is believed to be most of the matter in the universe. “If these particles exist and have masses in a certain range, they will prevent an intermediate-mass black hole from spinning fast,” he explained. But the J2150’s black hole is spinning fast. Now, scholars need to understand how and why.

In the future, new observations of tidal perturbation eruptions may allow filling gaps in the mass distribution of black holes. To that end, astronomers have high hopes for new online telescopes, both on Earth and in space, such as the Legacy Survey of Space and Time (LSST), which, when launched, is expected to discover thousands of tidal disturbance events around the world. year.

“If we find that most dwarf galaxies contain intermediate mass black holes, then they will dominate the rate of disturbance of stellar tides,” Nicholas Stone, a professor at Hebrew University of Jerusalem (Israel), said in the press release.