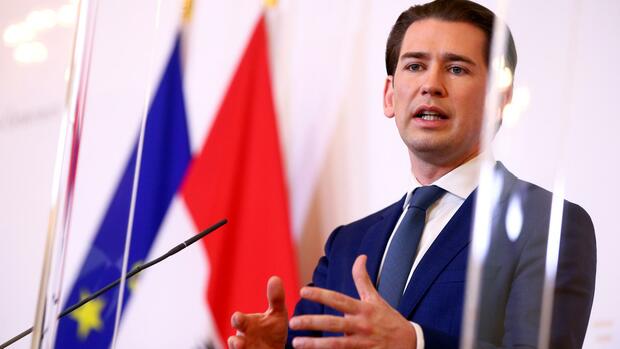 Vienna A quick compromise in the dispute over reconstruction aid in the corona crisis is not in sight at the EU summit this Friday. Even before the event, Austria’s Chancellor Sebastian Kurz (ÖVP), in conversation with the foreign press in Vienna, opposed the EU Commission’s plan, supported by Germany and France, which provides non-repayable grants for particularly needy EU countries such as Italy and Spain.

“We are against a debt union through the back door,” said Kurz. The 33-year-old head of government warned of the misuse of billions in non-repayable grants. “Two questions have to be answered: How can you help properly? Where should the money go? “

Germany and France are pleading for a reconstruction fund of over 500 billion euros. Chancellor Angela Merkel and French President Emmanuel Macron proposed in mid-May that the money be paid to the countries in need in the next two to three years. The billion-dollar aid should be paid out as a grant and not as loans.

Austria is one of the “economical four” of the EU. The quartet, consisting of the Netherlands, Denmark, Sweden and Austria, rejects free money for EU countries that are particularly affected by the pandemic.

The conservative chancellor does not want to accept the accusation of lack of solidarity. “We want to help. We are in solidarity, ”said Kurz. “We have therefore approved the € 500 billion aid package.” The government in Vienna is demanding that no further funds be pumped into needy EU countries without requiring far-reaching reforms.

In addition, loans are more dignified than grants. Austria wants to flow the EU funds primarily into digitization, greening, start-ups and the health sector in order to strengthen Europe as a business location in competition with the USA and China. Austrian government circles point out that the European rescue package ESM has not yet been exhausted with over 500 billion euros.

In Vienna there are fears that Italy, which is heavily in debt, could waste the planned free money. The Italian plans for a holiday allowance of 500 euros are mentioned as a negative example.

It cannot be explained to Austrian taxpayers why the Italians should receive a holiday voucher. Italy could finally take out loans in the corona crisis on better terms than Austria at the time in the financial crisis.

The relationship between Vienna and Rome has been under strain for months. In particular, the border regime of the Austrians on their southern border angered the Italian government.

Federal Foreign Minister Heiko Maas (SPD) already felt how uncompromising the Austrian government is with the reconstruction fund during his working visit to Austria on Thursday. When talking to his Austrian counterpart Alexander Schallenberg (ÖVP), there was no rapprochement.

Maas could not hide his lack of understanding of the position of the black and green government in Austria. “We cannot escape this crisis,” he said. The German chief diplomat added: “We have to invest money in the challenges of the future, not in the problems of the past.”

Austria, the country of export and tourism, is struggling with major economic problems. Government circles in Vienna assume that the government debt of the Alpine Republic will rise to over 90 percent this year. The government ranks that the problem of the corona virus has been underestimated across Europe.

In 2018, the debt ratio was 74 percent. In the country with a population of 8.9 million, there are currently over a million short-time workers. Thanks to generous state aid, they continue to receive 90 percent of their salary.

More: EU heads of government discuss reconstruction plan – no compromises are in sight.