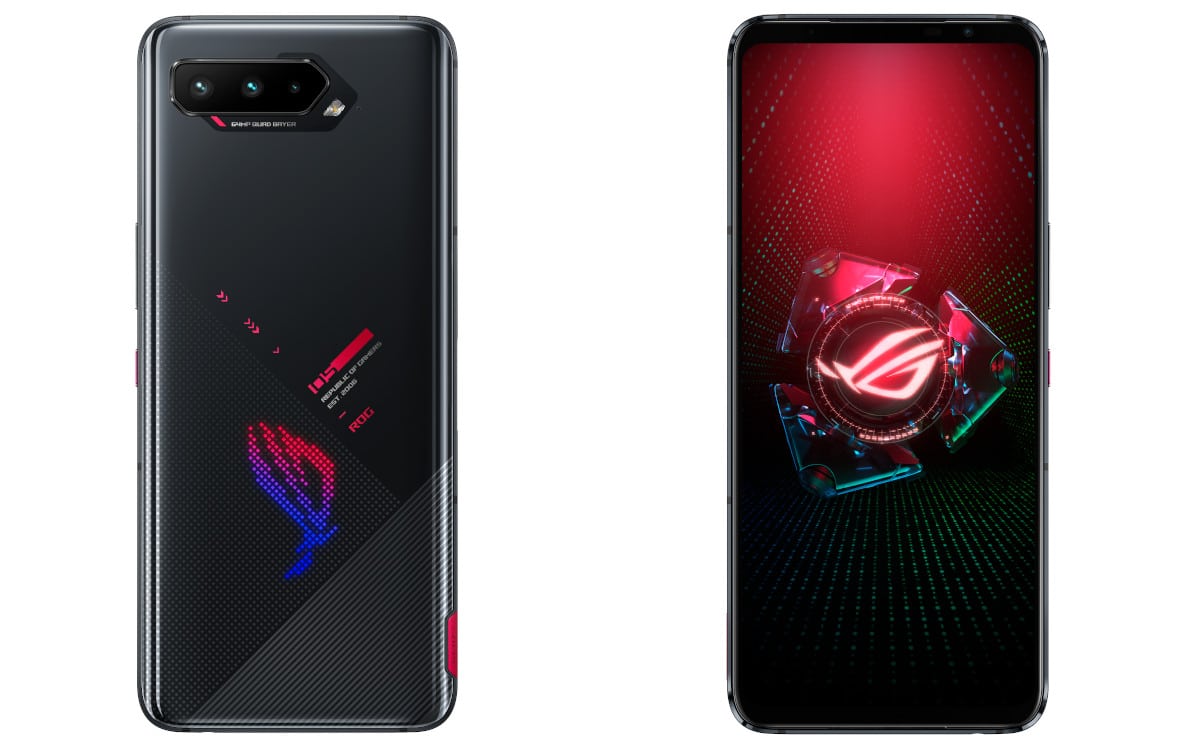 The Asus ROG Phone 5 is official. Or rather the ROG Phone 5, because it comes in versions and 5 configurations. All versions are equipped with Qualcomm’s Snapdragon 888 and a triple photo sensor, the main component of which is a 64-megapixel model. The amount of RAM varies from 8 to 18 GB and the storage from 128 GB to 512 GB. A secondary display is positioned at the rear of the more expensive models. The price: from 799 euros to 1299 euros.

In July 2020, Asus introduced the ROG Phone 3. Our test with the smartphone confirms that it was the most powerful smartphone developed to date. It is still today one of the best platforms to play: Snapdragon 865+, 16 GB of RAM, 6.59-inch Full HD + screen with 144 Hz refresh rate. And above all a few finery dedicated to the practice of the game video. We rated it 4.5 / 5.

Seven months later, here is the ROG Phone 5. Its arrival is not a surprise, since the brand has published teasers announcing its arrival in March 2021. In addition, many leaks have revealed some secrets, including the appearance a small secondary screen in the phone shell. Today, Asus officially introduced the ROG Phone 5. So it’s time to see if the leaks were right … or not.

RAM and storage aren’t the only things that differ between the different versions of ROG Phone 5. The classic ROG Phone 5 comes with a ROG logo on the back that lights up like on ROG Phone 3. But the one on ROG Phone 5 can display two colors at the same time. ROG Phone 5 Pro and Ultimate have an LED display (color for Pro and monochrome for Ultimate) on the back for displaying personalized messages. Asus calls it ROG Vision. It can be used to display notifications and practical information.

Also note that the accessory AeroActive Cooler 5 only ships with Pro and Ultimate. Buyers of the classic version will have to purchase it separately at the recommended retail price of 59 euros. And that is a real shame. Especially since the ROG Phone 5 is not compatible with the AeroActive Cooler 3 supplied with the ROG Phone 3. Finally, “goodies” in the colors of the brand are offered with the ROG Phone 5 Ultimate. We would have preferred an additional gaming accessory, like the ROG Clip for example.

An even bigger AMOLED screen

For the rest, the three ROG Phone 5 are technically and ergonomically identical. You will find a mineral glass shell on the sides and an aluminum frame. In addition to the decorations (RGB panel or ROG Vision screen), you will find a photo module with three sensors, an LED flash and some markings. Asus removes the opening that was used to ventilate the interior of the phone. On the edges, three changes. The 3.5mm jack port is back. The SIM drawer has been moved and is now colored. Finally, the side proprietary port changes slightly, indicating that the accessories of the ROG Phone 3 are incompatible with those of the ROG Phone 5. 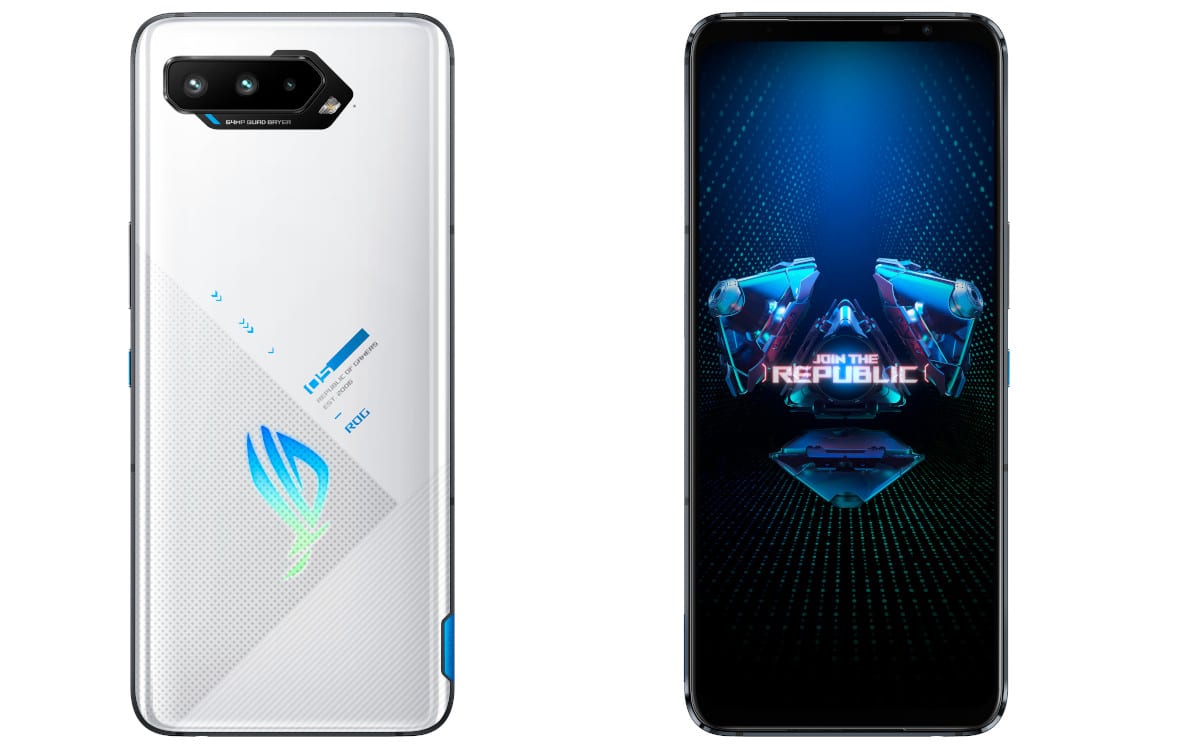 At the front, we find a large touch screen with two edges thinner than those of the ROG Phone 3. We find the two usual front speakers, as well as the selfie sensor. The touchscreen measures here 6.78 inch, which is 0.19 inches longer than the ROG Phone 5. It is AMOLED and Full HD + (here we lose resolution with the enlargement of the slab). It is compatible HDR10 + and 144 Hz, like before. It displays 1 billion colors. A fingerprint reader is integrated into it. And the refresh rate of the touch layer reached 300 Hz, against 270 Hz in 2020. Asus announces a response time of 24.3 milliseconds.

The Snapdragon 888 is obviously present

Inside, you will of course find the Snapdragon 888. Asus makes a point of equipping its gaming smartphone with the best possible platform. The component is clocked at 2.84 GHz. RAM is in LPDDR5 format. Storage in UFS 3.1 format. Like previous ROGs, performance can be improved with “X Mode”, which is now accompanied by ” X + mode Which only activates when the AeroActive Cooler 5 is plugged in (with the effect of lowering the temperature to 10 ° C). An advanced mode is also making its appearance to manage performance even more finely as needed. With such strengths, the ROG Phone 5 establishes itself as the most powerful smartphone with an announced AnTuTu score of 742776 points.

To control the heat emitted by the CPU, Asus has integrated in the ROG Phone 5 a larger steam chamber, surrounded by two graphite plates which convey the hot air to the outside at the level of the glass, but especially at the level of the aluminum frame. In addition, the internal construction of ROG Phone 5 has changed: the motherboard is now in the center of the smartphone, where the AeroActive Cooler mounts. And it is surrounded by two batteries. Each of them offers a capacity of 3000 mAh. That is 6000 mAh in all. ROG Phone 5 retains its two USB Type-C ports. These two batteries are fast charge compatible 65 watts, against 30 watts previously. Asus promises 100% charge in 51 minutes.

The return of the 3.5 mm jack port and support for WiFi 6E

On the audio side, Asus therefore keeps the speakers optimized with Dirac. The jack port takes advantage of a hi-fi amplifier signed ESS. Four microphones are still present. WiFi 6E compatibility is present (against WiFi 6). The camera equipment includes a 64-megapixel sensor, an ultra-wide-angle lens sensor and a macro sensor. So few changes here. Like the ROG Phone 3, the ROG Phone 5 offers two interfaces: ROG UI and ZenUI. They both integrate Armory Crate, the famous application to customize the smartphone for each game. Finally, Asus announces several new accessories: the controller ROG Kunai 3 ; theAeroActive Cooler 5, which takes all the advantages of its predecessor (including the support foot and the 3.5 mm jack port) and adds two additional hardware buttons; wired headphones ROG Centra II (USB or jack compatible, your choice).

ROG Phone 5 will be available in France on March 29. The ROG Phone 5 Pro will follow in April. And the ROG Phone 5 Ultimate will conclude in May. The latter will be offered in limited quantities. So that’s all the official information. Find the full test of the ROG Phone 5 (16/256 GB version) on PhonAndroid.com and very soon on our YouTube channel.