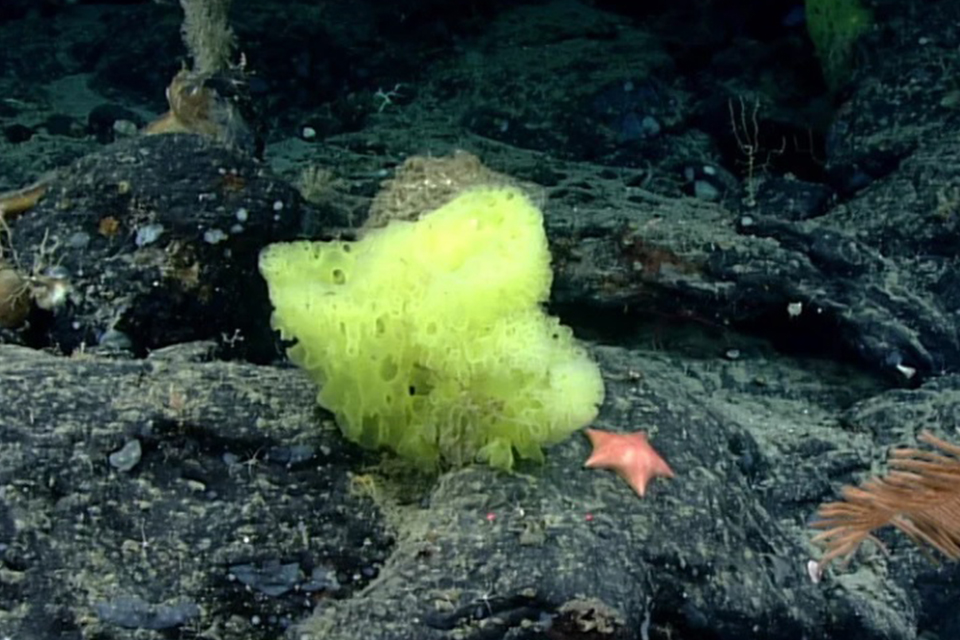 Marine scientists found a yellow sea sponge on the bottom of the Atlantic Ocean next to a pink starfish, which very much resemble the drawings of SpongeBob and his best friend Patrick.

The pair’s curious image was photographed during a remote expedition conducted by the National Oceanic and Atmospheric Administration (NOAA) research institution on an underwater mountain located about 200 miles east of New York City.

Sea sponges are simple beings with dense but porous skeletons. Despite not having mobility, they are considered animals because they are multicellular and have a digestion and reproduction system. Originated 600 million years ago, they have been cataloged in more than 8,500 different species, with variation in shape, texture and color, usually orange or white to help camouflage their environments.

Precisely because of this variety, finding a similarity to the Pants Square design — of the Hertwigia genus — with a bright yellow tone, was something rare and that surprised researchers. Christopher Mah, a marine biologist at the National Museum of Natural History, shared the record on his Twitter. The repercussion of the photo was so great and instantaneous that it reached Nickelodeon, replicated by the official Instagram of the SpongeBob SquarePants series.

“I thought it would be fun to make the comparison, as it was the first time that the designs and colors of the iconic characters [apresentaram um visual bem próximo da realidade]. As a biologist specializing in starfish, most of the representations of Patrick and SpongeBob are incorrect”, he commented to insider.

The starfish next to the sponge, on the other hand, belongs to the Chondraster genus. They can be various shades of pink or white and use their five suction cup arms to move around the ocean. Although SpongeBob and Patrick are best friends in the animated world, the species relationship is actually predatory: Starfish are carnivores and are known to feed on sponges.

“The reason the starfish is right next to the sponge is because that sponge is about to be devoured, at least in part. The reality is a little crueler than perhaps a cartoon might suggest,” he said in an interview with NPR.

the study of marine life

The NOAA mission that led to the discovery aims to collect more data on the deep waters off the east coast of the United States. This ecosystem is still poorly studied, despite having a rich diversity of species. Animals similar to characters from the Nickelodeon animated series were observed from approximately a mile deep.

The specialist highlighted that the equipment used and the knowledge obtained in the NOAA expedition — which started in 2010 — can help in the identification of new species. “We investigated depths of up to 4,600 meters and saw a wide range of ocean life never seen before. [Lá vivem] huge corals, many fish, starfish, sponges and many other undescribed species and therefore new to science”, pointed out the biologist.

These animals live deep in the ocean, in a habitat dominated by lack of light. In a conversation with Live Science, Mah spoke about the importance of publicizing the discovery and the repercussion it had with the public. “I’m happy that the photo has enchanted so many people. I hope it also raises awareness of the deep ocean as a habitat, which has been threatened by mining and deep-sea fishing,” added the expert.