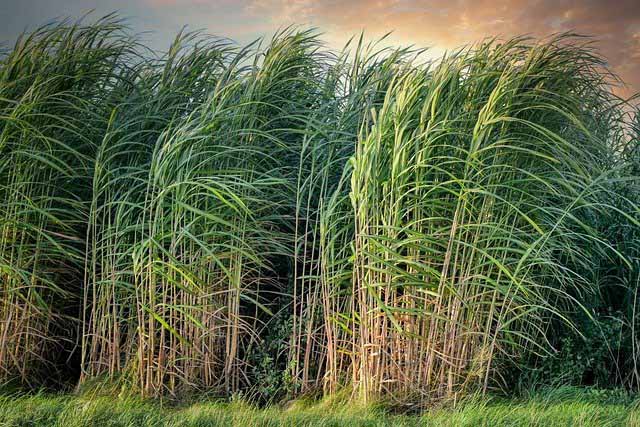 From garbage to luxury: sugarcane straw, an abundant residue from the production of sugar and alcohol, in the hands of a chemist and researchers from Embrapa is turning into crystals – to be exact, lignocellulose nanocrystals (LCNCs), also known as whiskers.

The biodegradable material is shaped like a grain of rice, has mechanical resistance similar to steel and has great potential for application in the petrochemical, pharmaceutical and electronics industries.

Currently, sugarcane straw is a production residue, with an estimated volume of between 10 and 20 tons of dry matter per hectare. It is used in the generation of thermal energy or left in the field to add organic matter to the soil. The research supervised by Embrapa opens a new path of possibilities, with noble applications of the residue in products with high added value, known as green materials – taken from plant fibers such as cotton and eucalyptus.

From Medicines to Electronic Devices

Nanocrystals, although similar to rice grains, are about 200,000 times thinner. In industry, they can replace some petrochemical-based products and have potential for use in products ranging from medicines to electronic devices, as well as consumer products, sensors, aerogels, adhesives, filters, food packaging, tissue engineering, among others utilities.

“Nanocrystals serve as additives, improving the properties of materials used in packaging and films, for example,” explained Cristiane Sanchez Farinas, coordinator of the research – which was conducted by chemist Stanley Bilatto, under the supervision of researchers from Embrapa Instrumentação in São Paulo.

How cane nanocrystals were obtained

Luiz Henrique Capparelli Mattoso, the researcher who initiated the study, is a materials engineer with a postdoctoral degree in Nanotechnology in the United States. He started studies with green materials in 2007 and discovered that it is possible to obtain them from lignocellulosic fibers from sugarcane bagasse, coconut and rice husks, cotton, eucalyptus, among others – even from residues such as reforestation wood discarded by the industry.

The straw converted into cellulose nanocrystals was pretreated with organic solvent (organosolv) and acid hydrolysis. The LCNCs obtained showed high yield and thermal stability, in addition to a crystallinity index of 80% – a property that determines the physical, mechanical and chemical properties related to the solid state structure of the product. 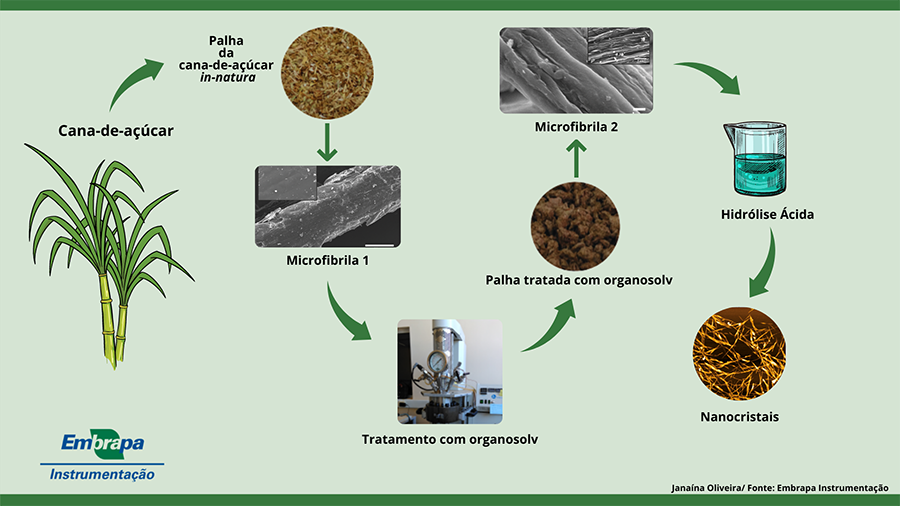 “The results demonstrated the effective extraction of cellulose nanocrystals with residual lignin from sugarcane straw, opening up the possibility of obtaining high value-added nanomaterials, a contribution to the sustainability of future lignocellulosic biomass biorefineries”, reported Bilatto .

In 2019, Embrapa researchers, in partnership with startup Bio Nano, began testing the production of cellulose nanocrystals (CNC) on a pilot scale, using eucalyptus and cotton. The next step will be to scale production and speed up the process to make it economically viable.

The great differential of sugarcane nanocrystals is that, although they are highly resistant, such as steel, they come from sustainable sources, such as vegetable fibers – and with advantages: “It is still possible to add them to other materials, changing their mechanical properties ”, says Mattoso. These characteristics have attracted industries around the world.

LCNCs can be used as fuel in biorefineries, which use renewable raw materials and their residues (biomass) for the production, by chemical or biotechnological route, of substances and energy, with a minimum generation of waste and polluting gas emissions, according to the specialized literature. Therefore, sugarcane nanocrystals are potential candidates for future fuel for the production of less polluting energy.

In 2020, Brazilian sugarcane production, according to the Brazilian Institute of Geography and Statistics (IBGE) was 677.9 million tons. In São Paulo alone, there is 55% of the total in the country. And sugarcane straw is one of the main residues of lignocellulosic biomass generated in Brazilian sugar or ethanol plants – the sugar-alcohol sector.

The residue of sugarcane straw can now become a renewable and sustainable alternative source to fossil fuels, responsible in large part for the emissions of gases that cause the greenhouse effect. The information is from Embrapa’s press office.